Considering the truly immense worldwide popularity of Go Nagai's famous super robot Mazinger Z and it's sequels, it seems hard to believe that this character would be so very unpopular. You'd think he would be at least popular by association but instead, he's been nearly forgotten in comparison and very few toys depicting him have been made. 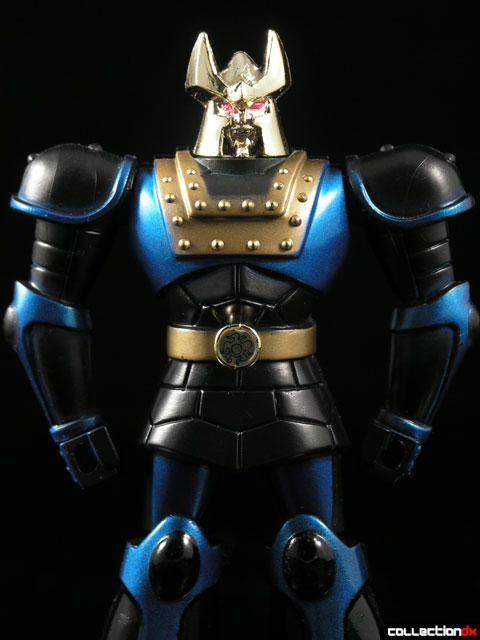 Of those toys known to exist, this one is considered the most desirable. The toy stands approximately 4.5" tall and is made out roughly 85% plastic and 15% diecast metal. The only parts containing metal are from the knees down and even there it's only on the front of the legs. God Mazinger does come with a sword and several missiles to shoot out of his stomach. The missiles launch via a button on the back of his waist, but you have to be sure to press hard or it won't work. The arms move up and down and the legs bend at the knees. The head turns side to side and that's about it for play value.

Despite it's flaws, I must say I like the toy. I have a soft spot for the character and besides the hands, the sculpt on the toy is not bad at all. The blue, black and gold colors really complement each other well with the red in the eyes being a nice final touch. 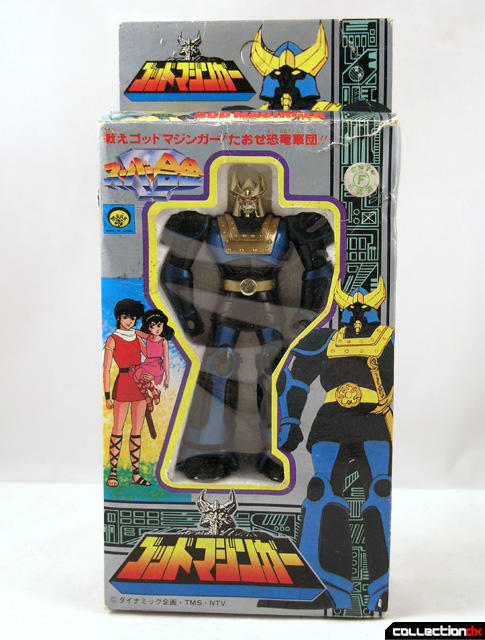 The packaging of the toy is very compact, with God Mazinger and 3 extra missiles resting in a styrofoam tray inside a box with a window on the front. Colorful artwork from the cartoon rounds out the presentation.

Overall I think this would be a worthy addition to any Mazinger fans collection, but I wouldn't recommend paying an awful lot for it. I've seen it sell for as much as $500-600 MIB and that's way too much, IMO. However, the most recent auction (11/27/05) just ended at roughly $100 and that's a good price.