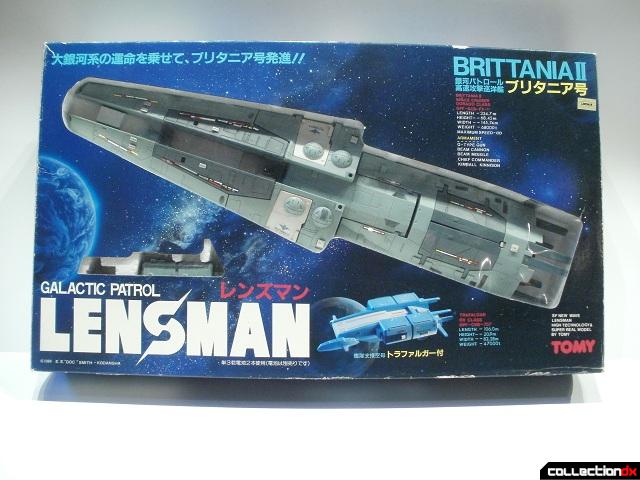 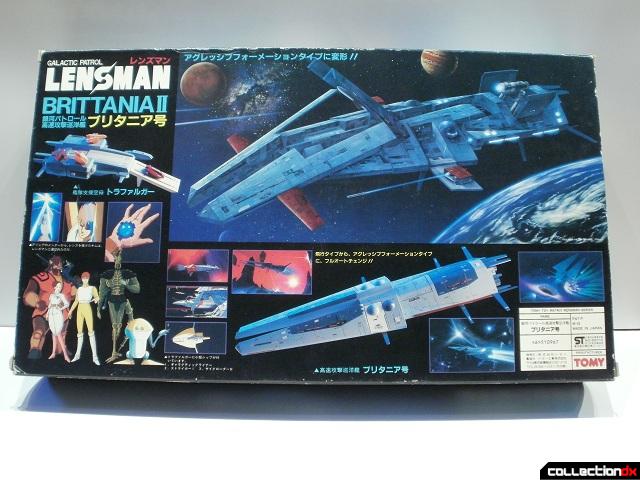 The fast attack cruiser Britannia II comes from Galactic Patrol Lensman, the 1984 anime adaption of E.E. Smith’s mid-century space opera. To my own regret, I don’t know very much about Lensman beyond the basic stuff that’s on Wikipedia. I know even less about the anime, aside from that the final product reportedly so infuriated the Smith estate that it lead to a permanent moratorium on any other Lensman adaptations, although the announcement of a movie deal in 2008 suggests this appears to have been relaxed. For what it’s worth, none of this matters. I love this toy. TOMY really outdid themselves with this line. But first, story time.

I grew up in Hong Kong, and that meant that a lot of the toys I owned were either came from US or Japanese domestic markets. This lead to a lot of confusion when I tried to reacquire toys that I used to have, based only on vague memories (like when I found out that sometimes the colors of Japanese Transformers were not the same as the US ones). The Britannia II was one such toy. I didn’t even own this as a child, but it made a permanent impression on me after playing with it at a neighbor’s. Trying to find out what this amazing thing could have been took much longer, and it was really only luck that I came across pictures of the Lensman toys online and immediately recognized it right down to all of its individual gimmicks. The realization that this was an expensive and fairly rare toy came soon afterwards, but every so often the God of Internet Auctions smiles on you, and eventually I ended up with a Britannia of my own. 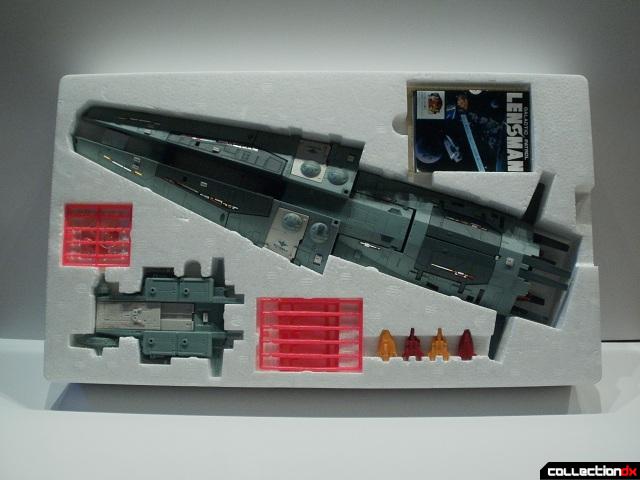 I still love the design of this ship. Its familiar wedge shape indicates that the designers may have taken a certain iconic ship of a certain imperial fleet as a point of inspiration, but the twin hulls and engine fins give this a real unique look. A decal sheet is included, but the ship already comes with some foil stickers and two crests on either side of the ship denoting this cruiser as the “Blitannia”. 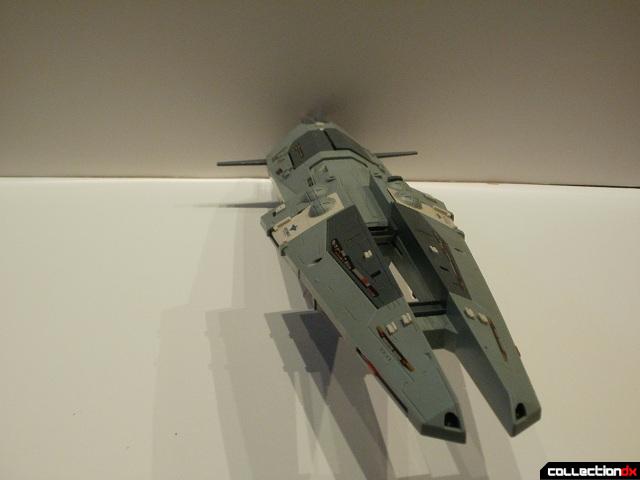 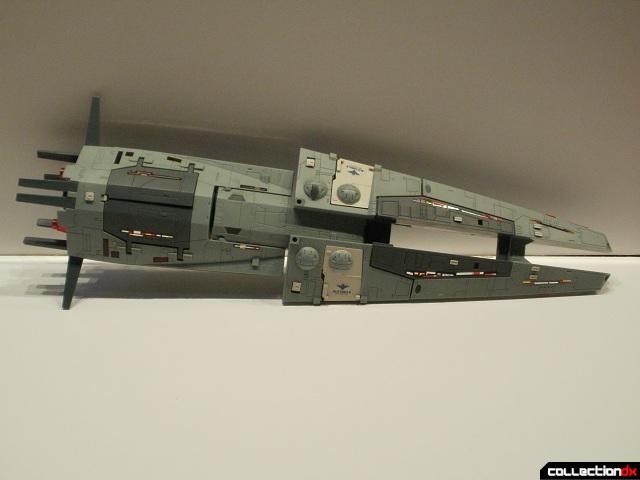 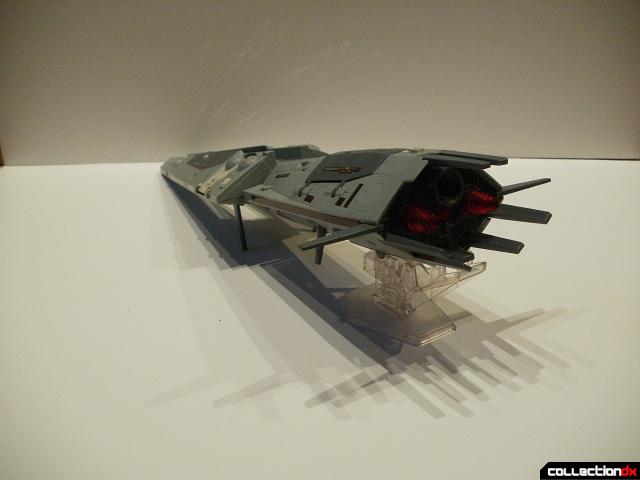 The Britannia II is armed to the teeth. The package includes 24 projectiles of varying sizes and construction. Buttons on the ship pop out cannons on port and starboard, there are twin forward torpedo launchers, and a latch releases the mighty “Q-type Gun”, a plunger driven behemoth that fires rubber balls around a quarter inch in diameter. 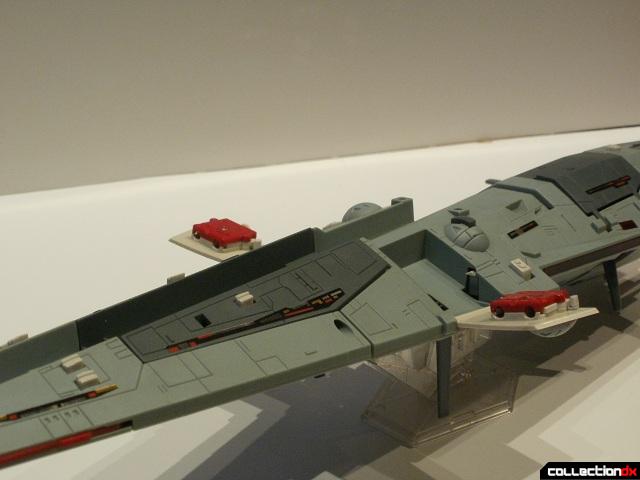 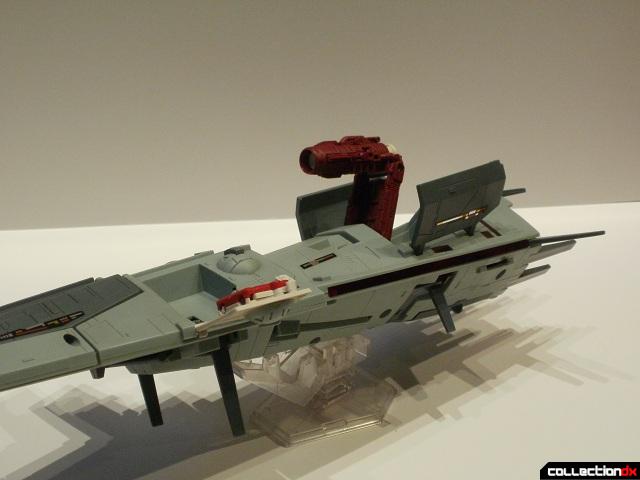 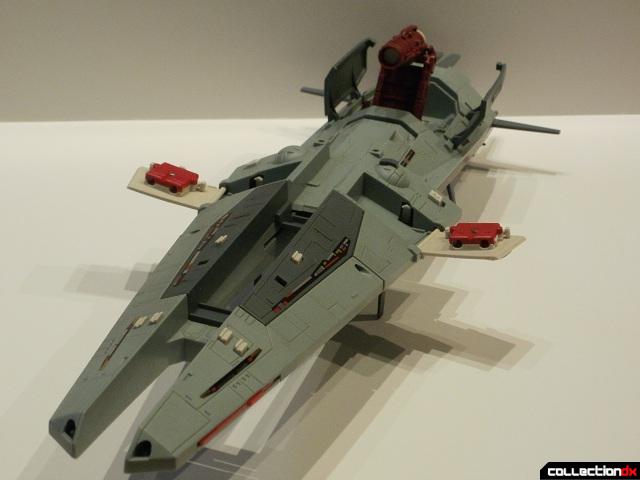 If that wasn’t enough there is another gimmick instantly familiar to anyone brought up on Star Command (the Coleco joint, not the Disney one). A button releases the wind-up motor, and the ship slowly and noisily folds into its odd looking “Aggressive mode” to reveal another two cannons in the ship’s interior. I have heard that this mode does not appear in the anime. 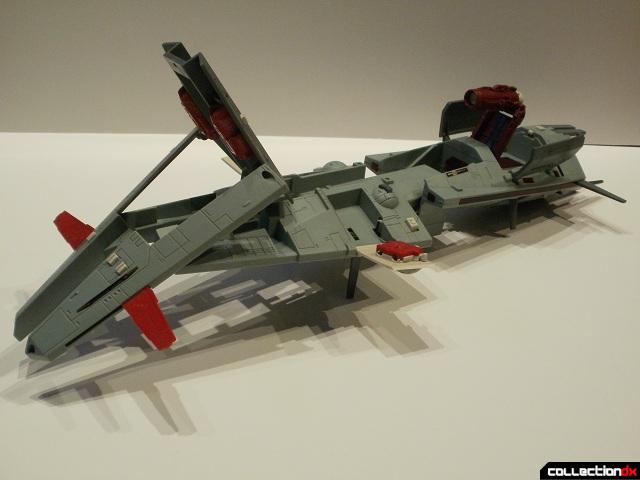 If that’s still not enough the support carrier Trafalgar is also included. While it only has a paltry two missile launchers, it can also “launch” one of the four included fighters (by raising them up so they roll down a ramp), race around on its pull-back motor, or dock to the top of the Britannia II. 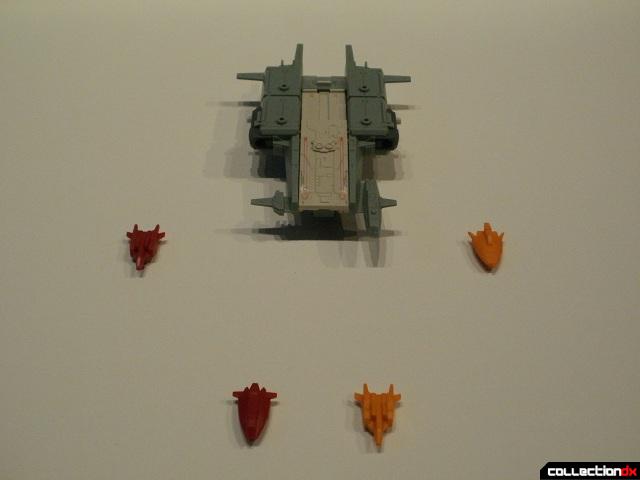 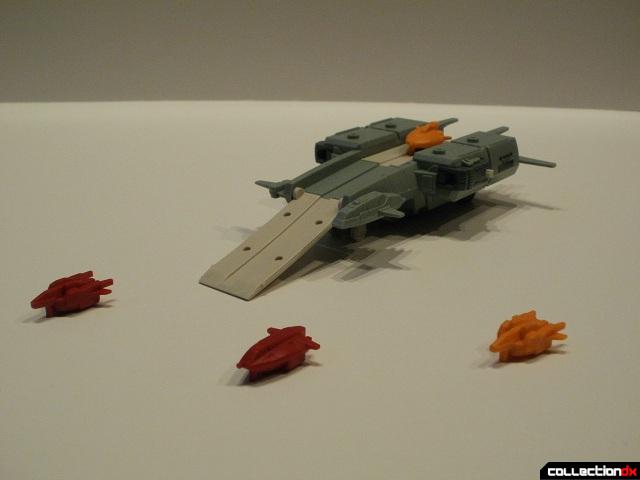 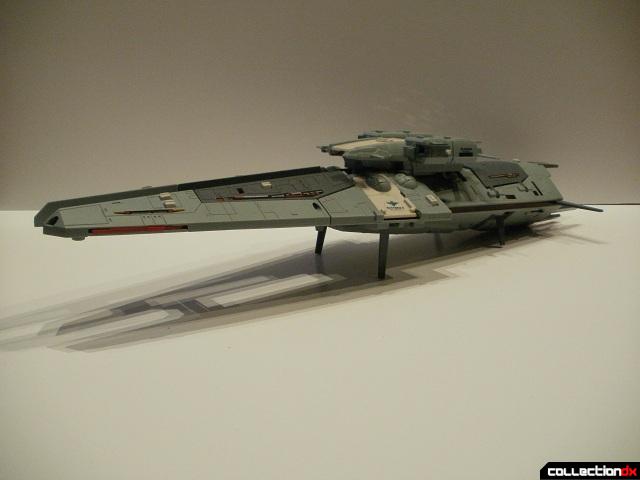 If somehow you’re still bored with all of this, the ship also has spring loaded sensors next to the torpedo bays, pop down wheels for rolling action, and a light up engine bay (2 AA batteries not included). 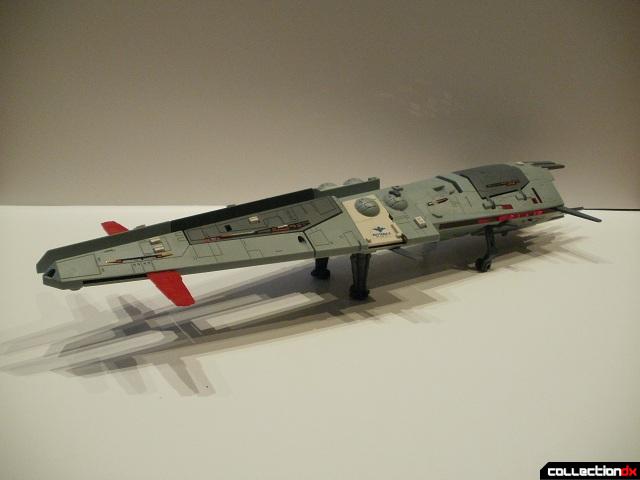 A wandering Pheyden was kind enough to stop long enough to provide a sense of scale. 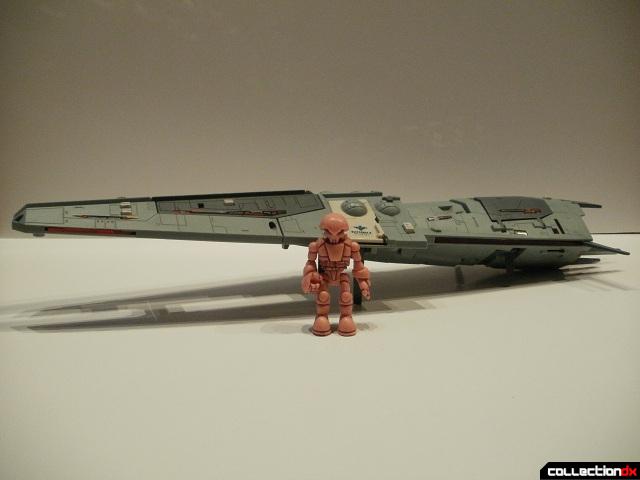 The Britannia II is something that I coveted and dreamt of, and it’s a fantastic toy that requires no knowledge of the source material, although it helps if you’re trying to find one.

5 comments posted
Apologies for the shadows

My photo setup has gotten a lot better in the time that I submitted this, I swear.

Sounds like we're in the same boat. I knew nothing about Lensman, but when I saw this toy I had to have it. Picked it up along with the robot from the show at that huge auction a couple of years ago. If anything takes me back to the days when toys were cool, it's a ship festooned with hidden missile gimmicks. LOL

Watch the movie if you haven't. It's quite good and VERY well animated. Also the second anime ever to use 3D CG, which thankfully was a better effort that's aged better than the first anime to use 3D CG Golgo 13.

The only thing is that from what I hear, it's a poor adaptation of its original source material. In fact, because of when it came out (1984), it visually borrows HEAVILY from Star Wars. They made the main character a farm boy like Luke and even has an R2D2 looking robot.

LOL! That's really ironic because Star Wars borrowed heavily from the Lensmen book series too. Hell, Lensmen themselves were basically the prototypes for the Jedi Knights!

There's the whole movie. I'd like Atom to watch it and then comment on it for the next CDX show.