The following is a real call I got at work one day.

Wife: “Just asking. Hey, what is a Bone-A-Parte? Is valuable?”

Wife: “Well our dog just chewed through one. The mail came and I left a package for you on the bench. I heard a noise and I saw that she had chewed through the box and into something called a boneparte.”

When I woke up, I discovered that thankfully Rosie (the dog) had only chewed through the box and the Styrofoam, and that the toy was relatively intact. And yes, the dog is still alive. 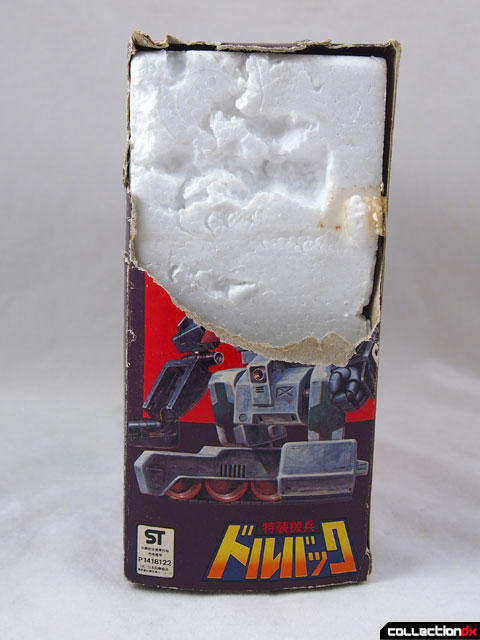 The toy is the 1/72 Bonaparte Tulcas Real Proportion Model by Takatoku. It hails from the anime series Machine Soldier Dorvack.

You might recognize it as Tanker, the weird tank-thing put out under the Converters line by Select. This is of course a larger, diecast version. It seemed like every kid had one of these in his toy box, mixed in with his Transformers, but had no idea what it was. For those of you  - I am here to enlighten. 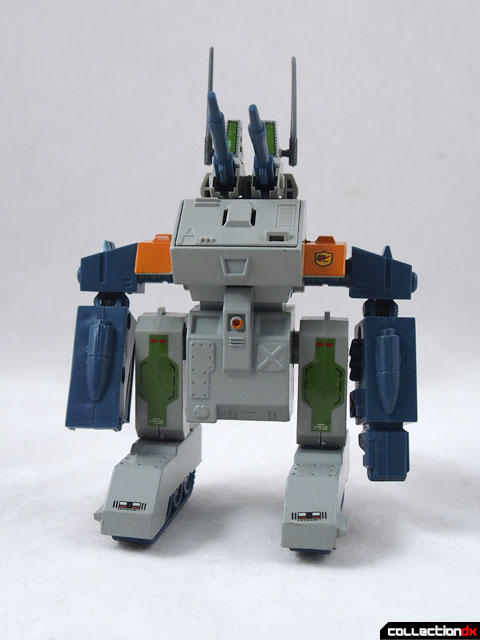 When Hasbro’s transformers line first started out, it was an amalgam of toys from various toy lines, most notably Microman and Diaclone. But there were other toy lines assimilated into the line, such as toys from Macross, Beetras, Dorvack and others. Hasbro cherry picked from available molds which toys they wanted from each show included in their line-up.

From Dorvack they took two out of the three main vehicles from the show. The Mugen Calibur became Roadbuster, the Ovelion Gazette became Whirl and Tulcas… well, he got left behind. So in a sense, Tulcas is the Transformer that never was.

Instead, he came over through the Converters line, in two colors, as well as countless bootlegs. Takatoku made three versions of Tulcas in various scales. Most likely the larger scale version would have been selected as a transformer, but we’ll never know.

This review is about the mid-size, non-transforming version.

Like most Takatoku boxes of the time, the thing is sexy as hell with paintings, mechanical drawings, and detailed pictures of the toy done over by a professional modeler. These images serve as a “what if” scenario, as these “models” were designed to be detailed and customized. Inside you get a classic Styrofoam tray, with sticker sheet, instructions, catalog and accessories. 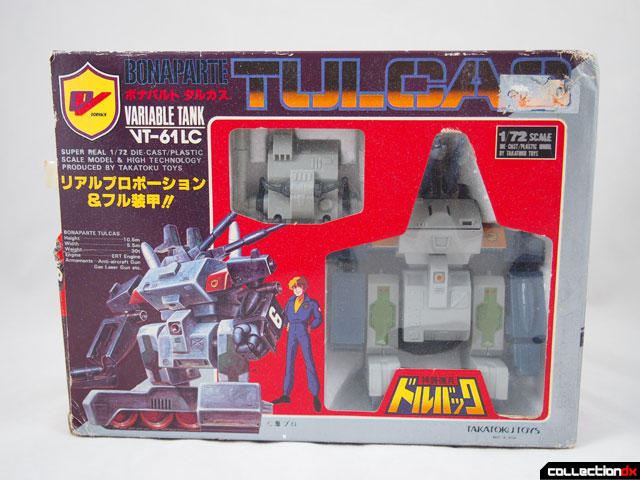 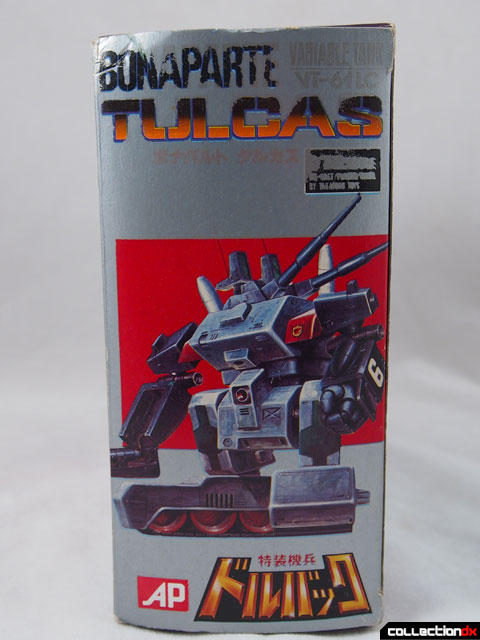 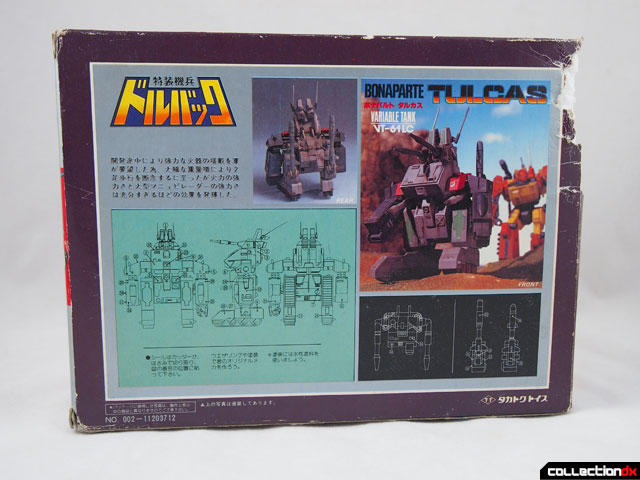 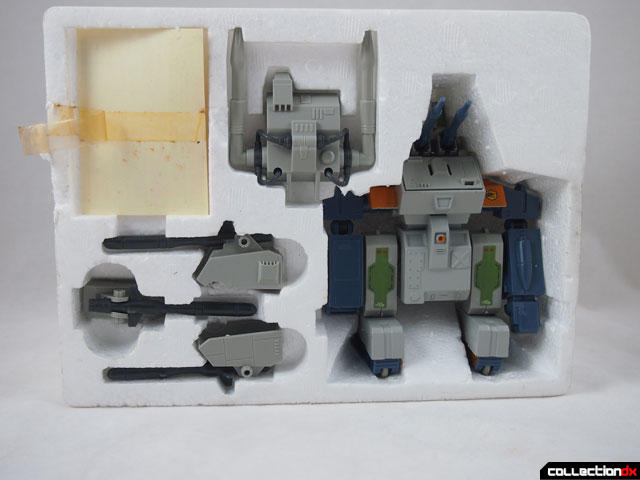 The reason Takatoku made these mid-size toys (in many of their lines) is so that they could create an accurate model without having to sacrifice detail in favor of transformation gimmicks. As such, this version of the Tulcas focuses more on being an accurate action figure. 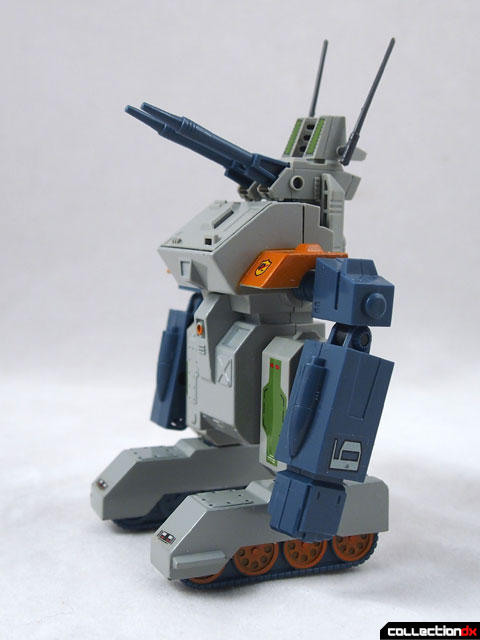 And what a great action figure it is. It’s heavy, with the metal content going to the body and parts of the legs. The rest is high-quality rigid ABS plastic. 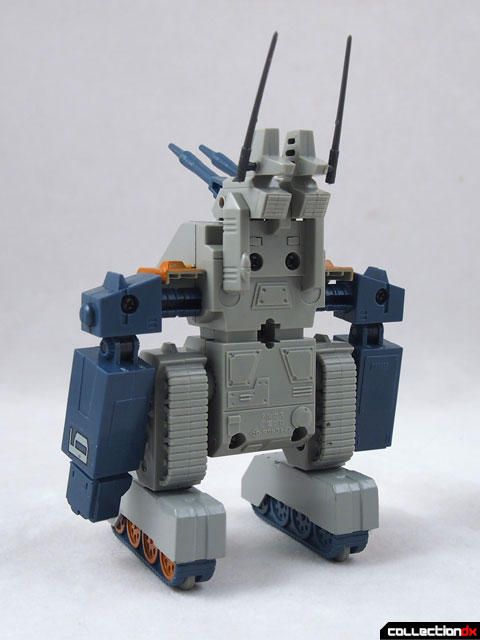 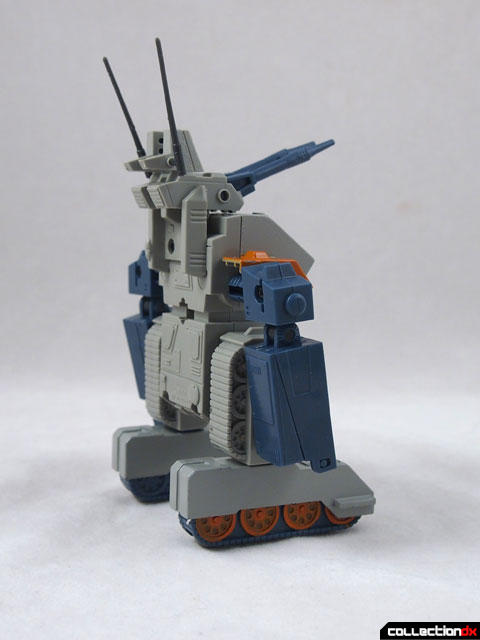 The “head” features two moveable guns, and the cockpit can open to reveal a detailed interior. The door is a bit tricky to open, and if you don’t do it just right there’s a danger of snapping the hinges. 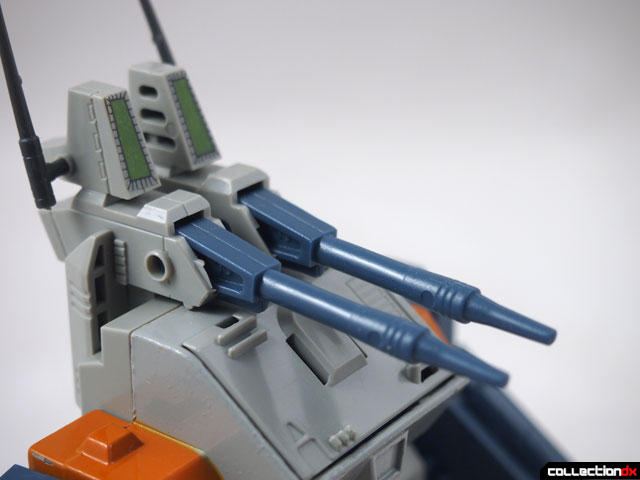 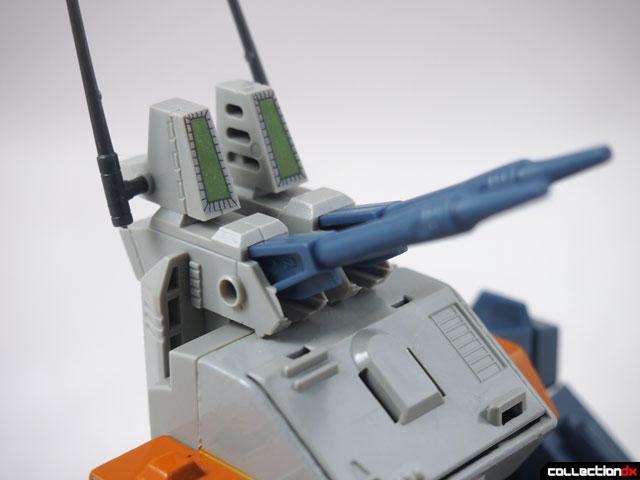 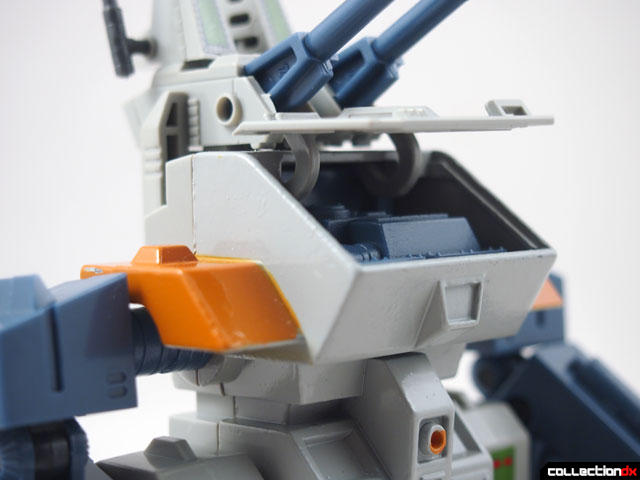 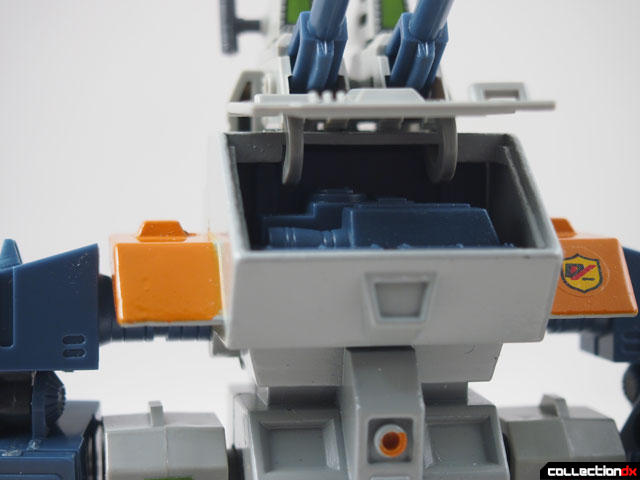 The arms rotate at the shoulder, and there are elbow hinges that also swivel. 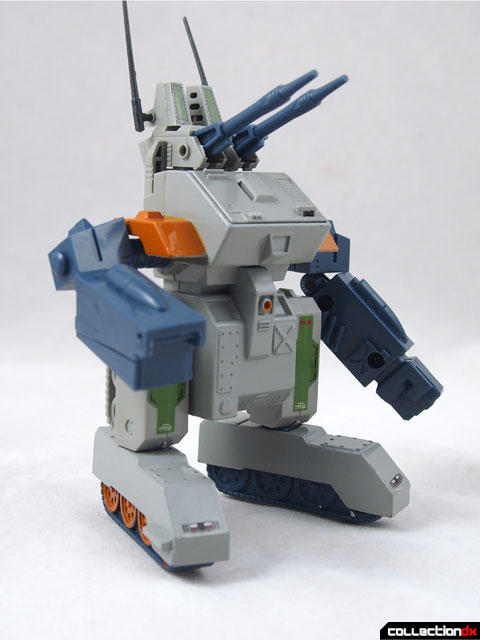 The left arm features the traditional fist, but the right arm holds a secret. And the design is a bit of the mystery. Notice on the left arm that there is a missile-shaped bump on top. Judging by the orientation of the fist, it is clear that this area is meant to be on top. But now look at the right arm. That same bump is there, denoting the top, but there is a door that opens on the other side to reveal gimmicks. For this door to open properly, you need to turn the arm around. It’s something that has never made sense to me. Perhaps it is explained in the anime, but it always has been a curiosity. 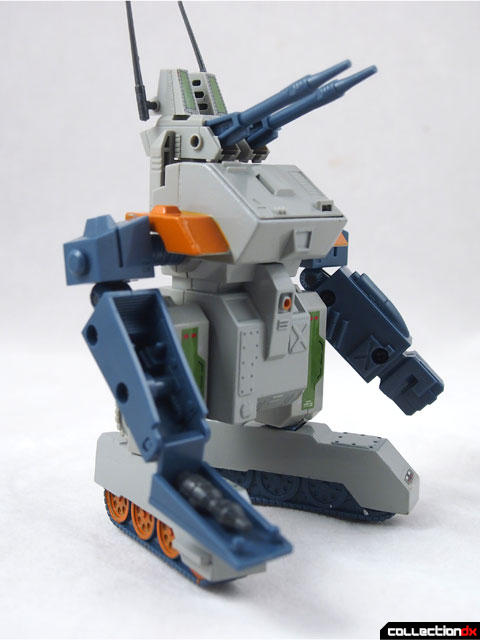 Inside this shovel-like apparatus is a missile that can be swapped out with something that looks like a walkie-talkie. No idea what it is, but it looks cool. 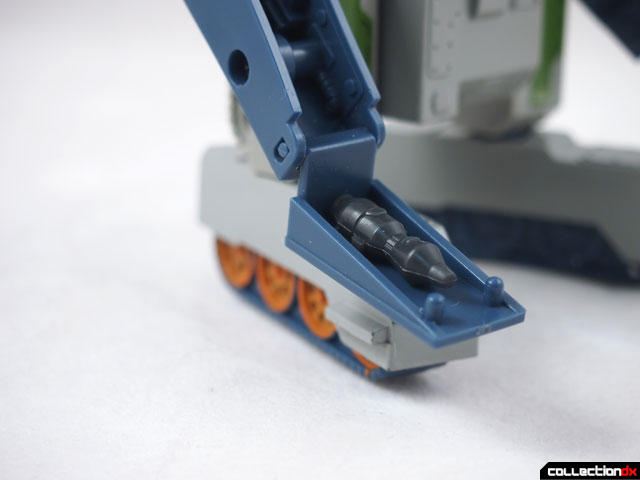 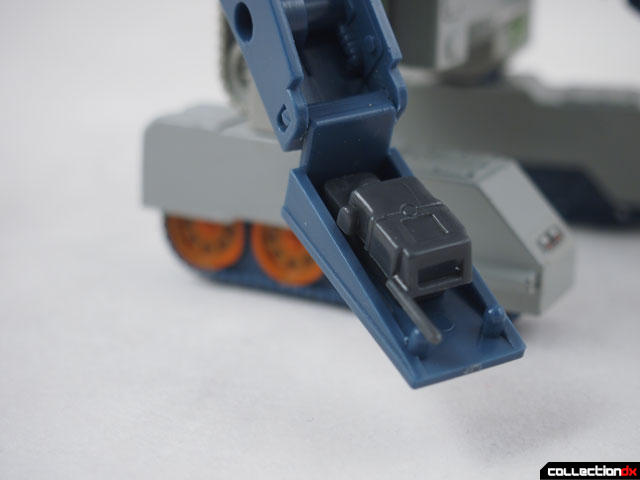 The legs rotate at the waist, and then rotate again at the tank treads. The treads do not move (Booo!) but there are small wheels on the bottom. 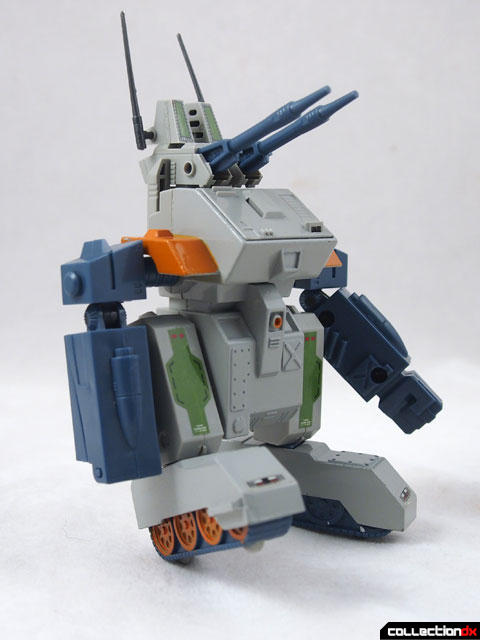 There’s a backpack included that really adds to the look of the figure.  I like the addition of the guns and the separately molded tubes. 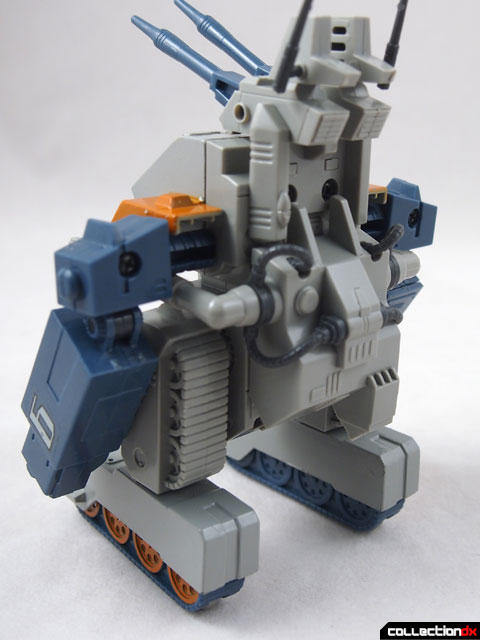 There’s also additional armor that clips to the back of the legs that hold two missiles. 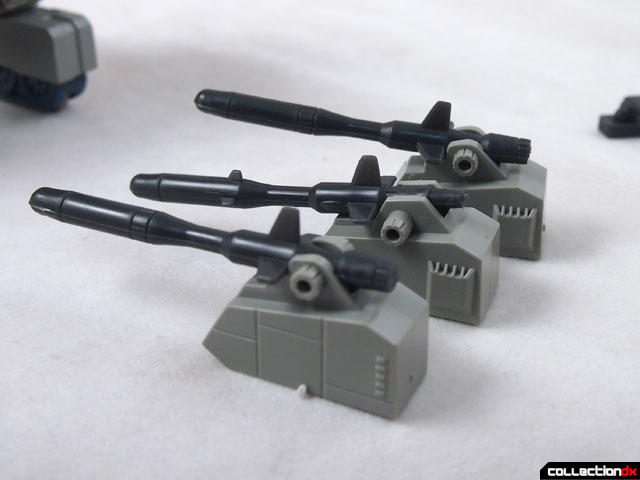 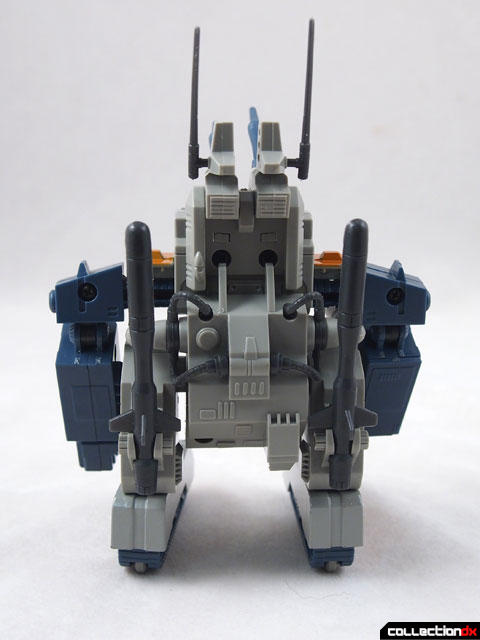 A slightly different third missile is included with a piece of armor. There is no missile launcher which is another missed opportunity.  This is the only version of the Boneparte Tulcas that includes this additional armor. 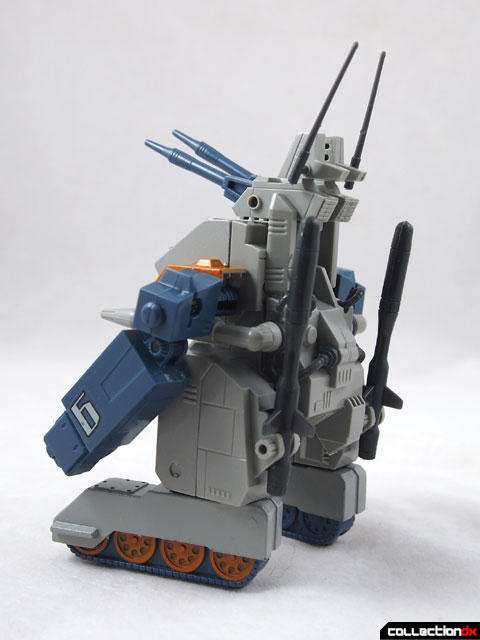 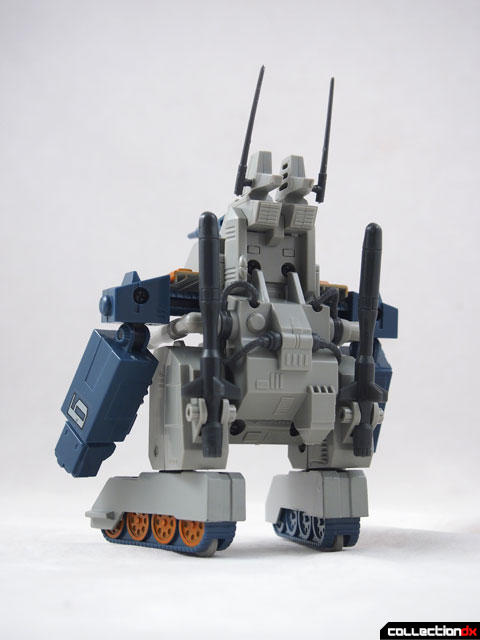 Boneparte Tulcas is a great example of 80s mecha design. It’s got a “real type” color scheme, it’s full of industrial design cues and it looks somewhat feasible in real life, if not impractical. 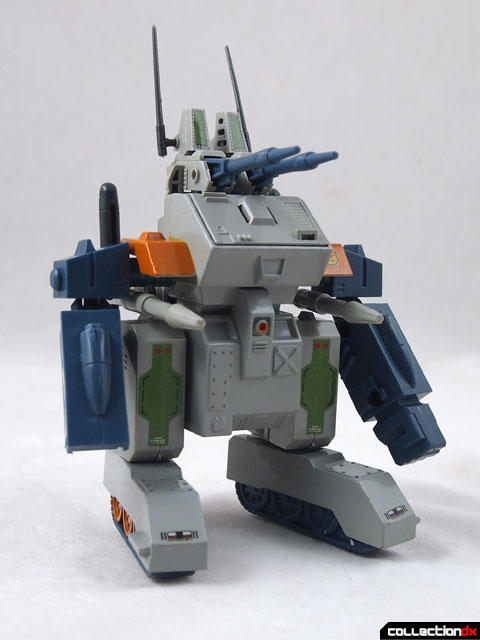 There are a few missed opportunities in the design, but overall I think it’s a fantastic piece, and indicative of where my tastes run these days. 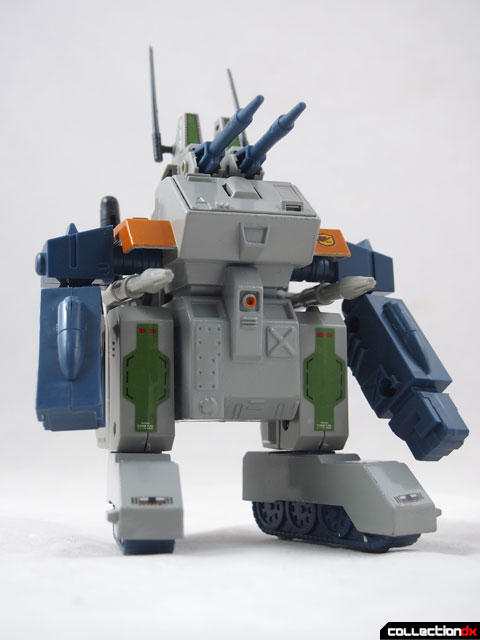 5 comments posted
What- it doesn't transform?

What- it doesn't transform? Boo!

Your dog has a great taste in toys as well!

So whats the current going rate for an item like this mib or loose?

This guy was such a third wheel in the show. And then the pilot, Pierre Bonaparte, died in a fire and got replaced just like Musashi from Getter Robo.

IT'S SO CHUNKY. I love chunky robots.