LT Col Robert Baseler was an American WWII fighter ace that served in and commanded the 325th Fighter Group in Tunisia and Italy. The 325th FG was known for its colorful and outrageous markings, specifically its yellow-checkered tail markings. It has been said a German air commander remarked the 325th FG was made up of a bunch of “checkered tailed devils” and in typically American fashion LT Col Baseler painted up all his aircraft with yellow checkerboards on their tail. Regardless if this tale is true or not, 325th FG aircraft has always been a popular subject with modelers due to their colorful markings and historic significance. 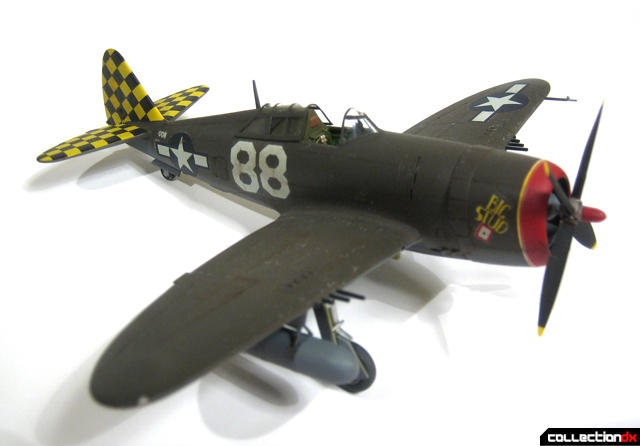 Although Lt Col Baseler started in Tunisia with a P-40 named “Stud” he continued to name his aircraft he was currently flying with various names of “Stud” including the P-47D Razorback “Big Stud” he used in Italy in 1943, where he shot down his sixth and last aircraft of the war, and the subject of this Hasagawa model kit. Lt Col Baseler ended WWII as a flying ace with six aircraft downed. I am not sure if he is still alive or not, but he was alive during the 1980’s as a friend of mine from my IPMS modeling club had the chance to meet him at an air show in the 1980’s. 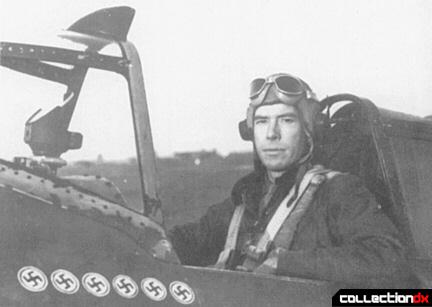 Before I start reviewing Hasagawa’s Macross Valkyrie kits I would like to go into a little bit of history of the Hasagawa Modeling Company, and review one of their earlier kits to demonstrate why they were the perfect choice for Big West to allow them to design and manufacture the Valkyrie Fighter kits.

Kabushiki Gaisha Hasagawa, also known as the Hasagawa Modeling Corporation, is one of the oldest model kit manufactures in Japan. Starting out as a wood toy manufacture in 1941, by the early 1960’s they released their first plastic ship and airplanes model kits, and later switched to manufacturing plastic kits exclusively. The kits were a huge success in Japan, and many were exported outside of Japan. 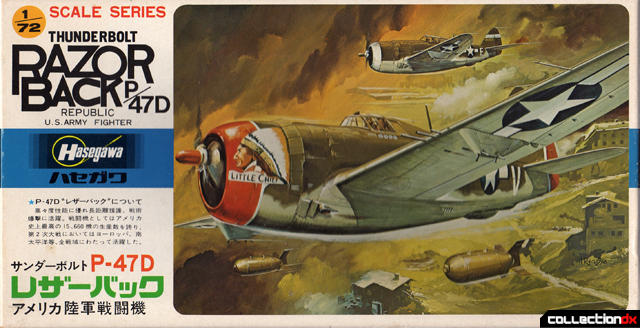 The 1970s were a difficult time for toy and model kit makers. Many companies folded, sold, or closed operations at the time due to the worldwide recession, the rising price of materials, gas shortages and the retirements of many of the upper management and designers of toys that got their careers started in the 1940s. Historic toy companies like Hawk, Airfix, Lesney Matchbox, Aurora, Frog, and Mego all had their final days with their original managements and products during this era.

What made Hasagawa stand out from the other makers was that, instead of relying on their older outdated 1960’s kits to carry them through the 1980s, such as what Airfix did and what would be the ultimate demise of Airfix, Hasagawa reinvented itself with a new line of model kits that would eventually be the standard for what all 1/72 aircraft models would be based on.

Hasagawa would take Japanese toy craftsmanship to an entirely new level. These new lines of kits would feature recessed panel lines, logical constructions, thin trailing edges, refined molding, and by the end of the decade, historically accurate and detailed decals and significantly improved aviation fine art by famous Japanese aviation artists as the box illustrations for the product. Outside Japan, these kits were much more expensive than domestic kits, but modelers knew that when they were opening the box of a new Hasagawa product they were going to get a superior product.

Hasagawa’s model kit of the Republic P-47D Razorback was released during this reboot era, and, although some aspects of the kit are dated, especially compared to the new benchmark of the recent Tamiya offering, with some slight modifications Hasagawa’s P-47 kit still holds up quite well for being 30 years old. 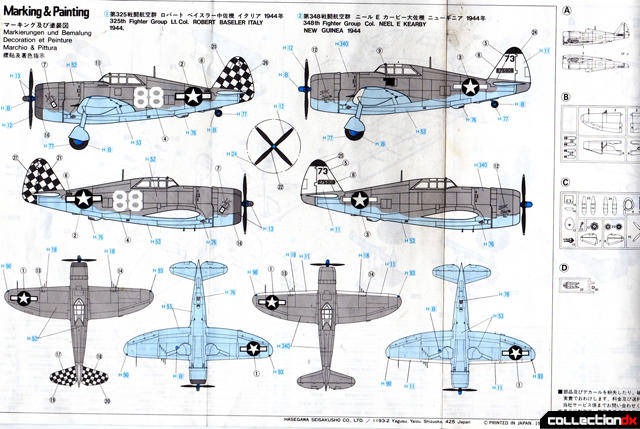 This is one of those kits I have had for many years in which I believe I bought in the early 1990s. A few months ago I thought it would be a great primer to discuss the history of Hasagawa with CDX readers. 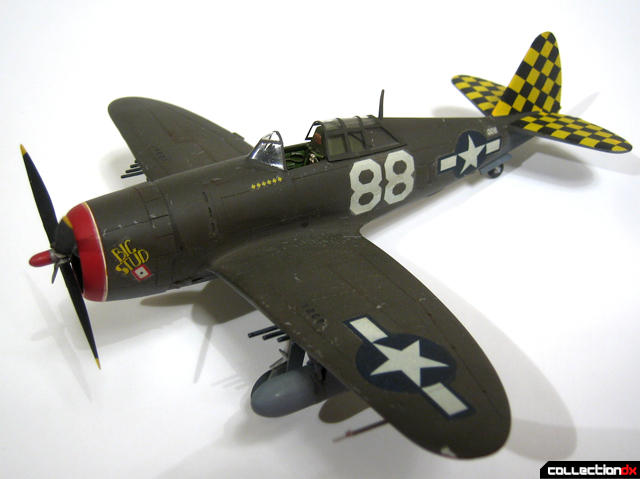 Although the look of the shape of the kit stands up well to modern kits, there are a few issues that a modeler needs to fix in order to bring it up to modern standards. I replaced the window of the kit with Squadron’s clear vacuform replacement canopy, as I had lost the original over the previous years. 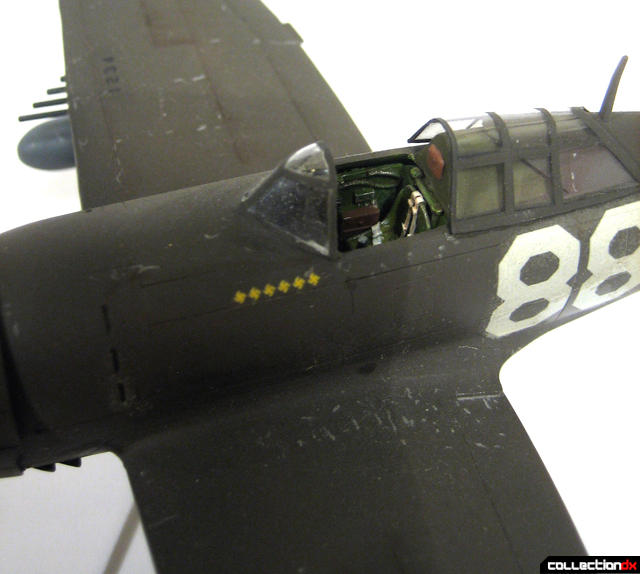 The biggest problem with many of these older Hasagawa kits is the cockpit interior, and landing gear wells. The interior is just a one-piece basic and inaccurate cockpit that looks nothing like the real cockpit of the aircraft. Luckily, True Details makes a superior and inexpensive resin replacement interior cockpit specially made for this kit. That alone greatly improves the look of the kit. 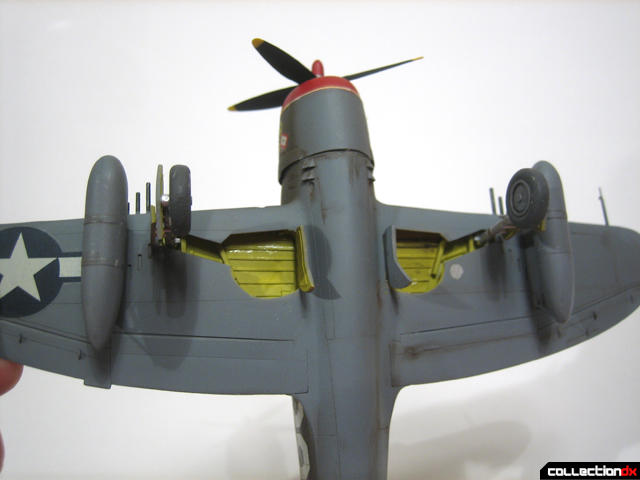 The wheel wells have always been a problem with most model kit manufactures, and Hasagawa is no exception. The wheel wells are an open hole that you can see into the wing cavity whereas the original aircraft has a boxed in wheel well. That alone was the most time consuming fix on the kit. I boxed it in with sheet plastic as best as I could, and the result is adequate. 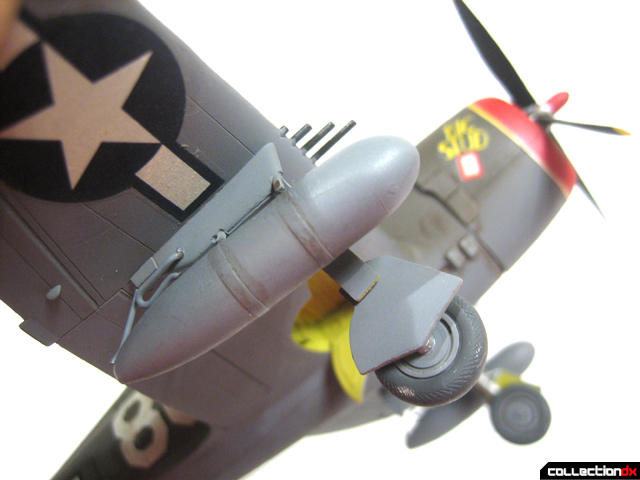 Finally, the bomb and gas tank pylons do not have the intricate sway bars, fuel hoses and mounting brackets modeled in. Those had to be scratch-built using various pieces of plastic and metal wires. For a first attempt, they came out very good. 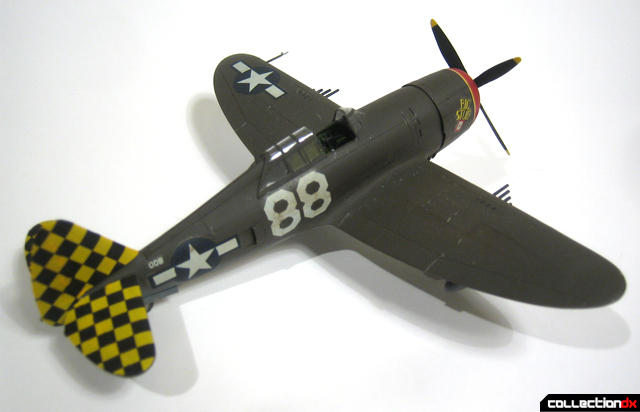 The kit otherwise fits together well, and is a very basic build. The fragile antennas and the protruding gun barrels have to be watched closely while building so they are not broken off. The landing gear doors are molded in one piece, so they have to be carefully cut out with and X-Acto blade and cleaned up.

I painted the kit with Tamiya’s XF-62 Olive Drab and XF-53 Neutral Grey. The Tamiya Olive Drab is very dark, and I plan to lighten the color up next time I use it, as it is almost black. After applying a gloss coat for decals, the decals went on great. Although they look thick on the backing paper, once the decals come off the paper they are very thin. The yellow stripe decal that goes around the cowling was impossible to put on, and I eventually settled with half of it upside down with the white showing.

After Testors clear flat coat to seal in the decals, I weathered the kit using oil paints and a silver pencil. The resulting aircraft look great and all I can say there is nothing like the look of a finished Japanese Model kit painted with Japanese paints, and reminds me of those old ads in Hobby Japan in 1980’s. I have finally reached the level of model building I have always wanted to reach. 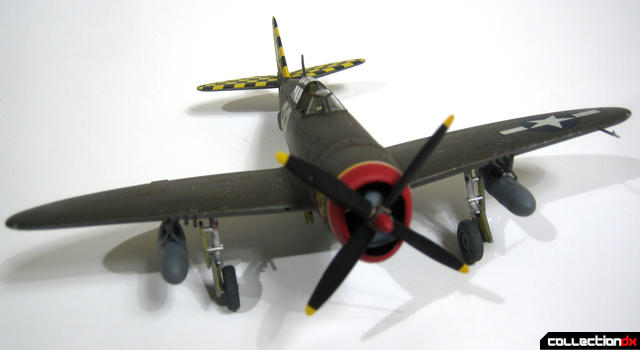 This kit can still be easily located inexpensively in its various forms, as it has been in and out of production for over 30 years. Tamiya just recently released a brilliant 1/72 P-47 kit of their own that will be the subject of a future CDX review, but considering the age of the Hasagawa kit, it stands up quite well provided if you want to spend a little time cleaning the kit up and replacing the interior. A fine artifact of the reboot of Hasagawa and a signal of what was to come for Macross Model kits 20 years later.

you ever do those diecast model kits they have at bigboytoystore???

Thanks Atom! The kit looks great and I should have it finished by the end of next month. The Valkyrie kit is out of this world and I cannot wait to get a review of it on CDX. The attention to detail that Hasagawa produced will blow your mind. I just wanted to get a perspective of what kind of company Hasagawa really is and where their bread and butter of their company is, Military Aircraft.

I haven't built any Die Cast model kits but could you send me a link what items you are talking about as I would like to check them out.

I think this is one of the first model kits I've seen reviewed here. Great job! Surprised at how much more consistent this kit review is with the niche robots and Japanese toy market then other items I have seen!

The joke I've always heard is "It's a Hasegawa kit, pour some paint and glue in the box and shake it a bit and an airplane falls out."

It makes me kind of sad that Hasegawa didn't get licensed to produce fighter-mode kits of the Macross F Valkyries. And that they haven't taken on Macross 2, either; I'd love to see some injection-molded kits of the VF-2 (as opposed to an obscenely expensive bootleg of a 1990s-era resin kit!)

Thanks for the interesting review, nice model also.

Starro & O. Rigas, thanks! Those who grew up with Model Graphics and Hobby Japan in the 80's, those magazines always gave a few pages tp Fujimi, Hasagawa, Tamiya and Otaki airplanes out of respect of the craftmanship these companies offered.

Hasagawa has been very slow to released and get into the Sci-Fi market for many years, but recently they have been making those inroads with the Ultraman jet, SF3D / MacH K, and more Macross. I have a feeling when that upper management starts retiring the younger engineerings and designers who are about our age who grew up with these shows, Hasagawa will start releasing more Sci-Fi items.

Hasagawa has always been a very private and cautious company but I think we will see those releases eventually.