I first set eyes on him at Alen's house. He stood out amongst the other toys, with his translucent firebird wings. They sparkled with metallic flecks in the sunlight. A glorious metal god amongst common robots. He was the Clover Tryder G7 Bird attack. I had to have him.

Eventually, via ebay, I secured a specimen through a Hong Kong dealer. I couldn't wait to open him. Inspecting the package - the box was a bit worn, but the toy looks as if it had never been removed from the box. Interesting note about this box - there's no back, it's just a styrofoam tray and a window-box cover. There are actually 2 versions of the box for this toy - solid and window boxed. As you take off the flimsy cover, you notice a very cool detail - the character's name is embossed in the styrofoam in katakana. Awesome. 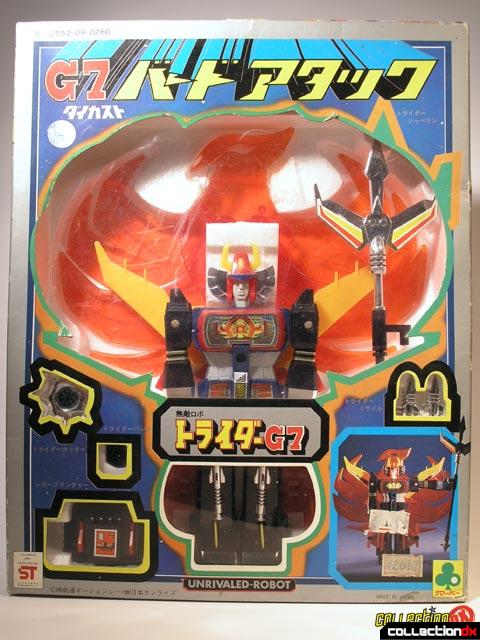 Tryder G7 comes with quite a few accessories: 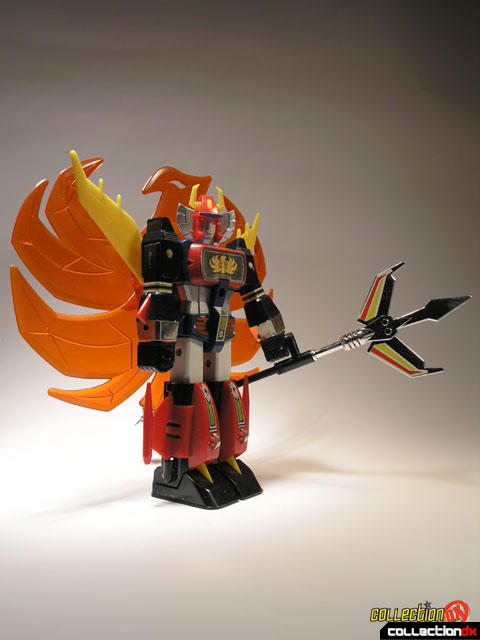 Each accessory has its own resting place in the tray.

Right away, I notice something is wrong - the firebird wings. They don't have the metallic flecks in the translucent orange plastic! Bummer! But have I stumbled upon an unknown variant? This needs further investigation. The wings plug into Tryder G7's back via 2 pegs. The wings have moveable sections, with little tabs to make sure they stop in the appropriate place. 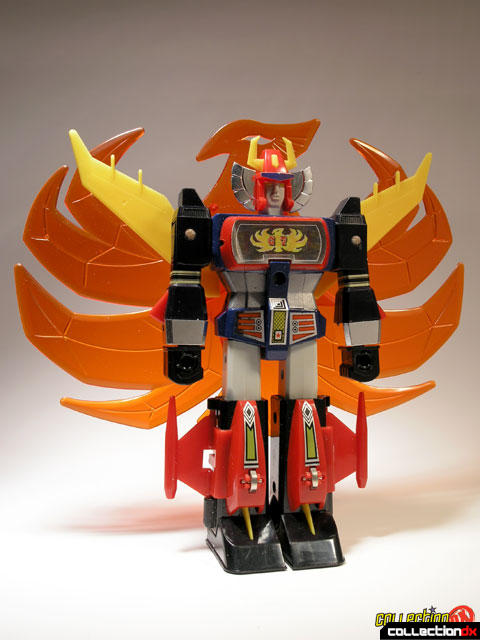 The Tryder figure itself stands about 6" tall and is heavy. Most of this toy is diecast metal. There are several cool gimmicks packed in to this beauty. First, there is a lenticular sticker on the chest. Depending on which way you tilt the toy, the image changes. 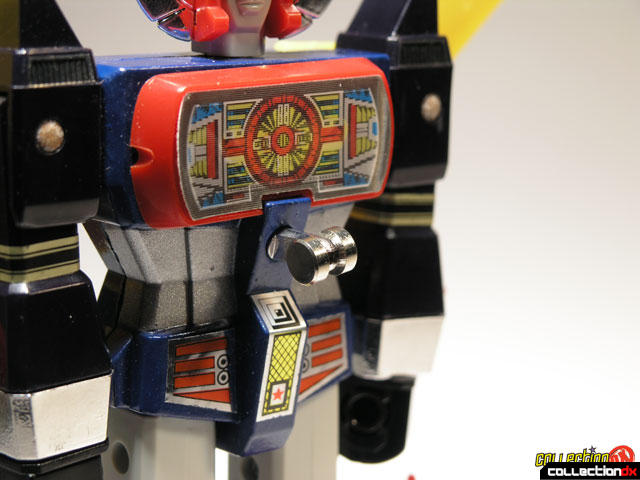 Next, the fists fire, and you can also insert missiles or the disc weapon in his arm and fire those as well. The Fists can hold the giant Trident weapon. The legs open up to reveal hidden missiles, and the head is removable and becomes a small ship. The yellow wings on the back can swivel. 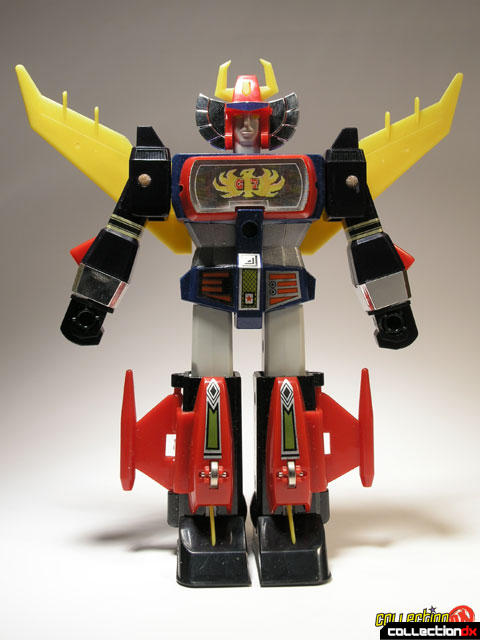 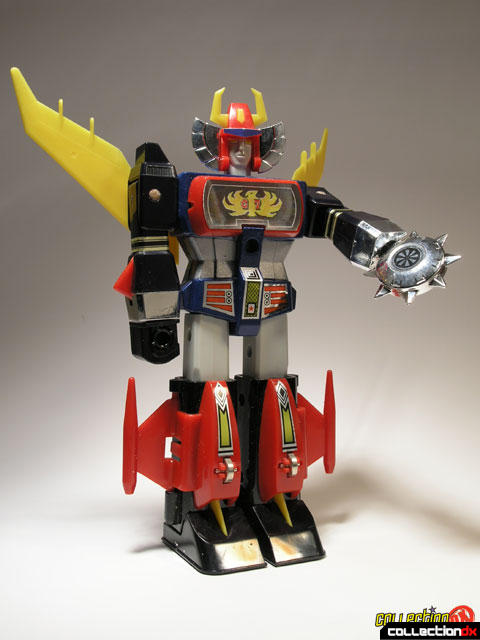 Tryder G7 can transform into 2 vehicle modes, both kind of lame, but you have to give Clover credit for getting the most out of a toy. The first mode is simply the toy lying on its back, with toes pointed down and a missile launcher placed on the feet. The second mode places the toy on its stomach, and adds a third wheel that plugs in the chest for support. 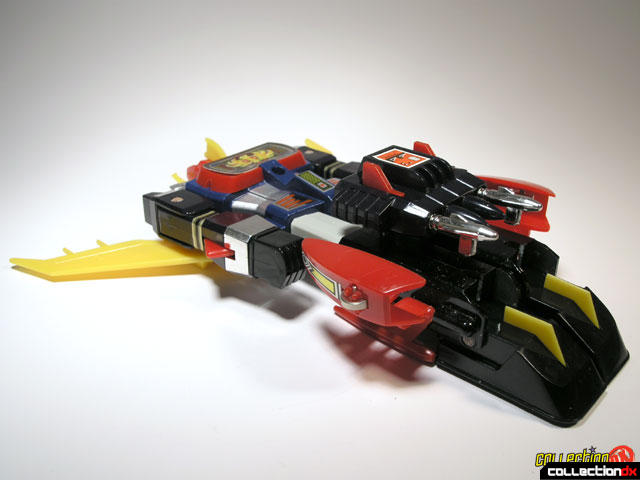 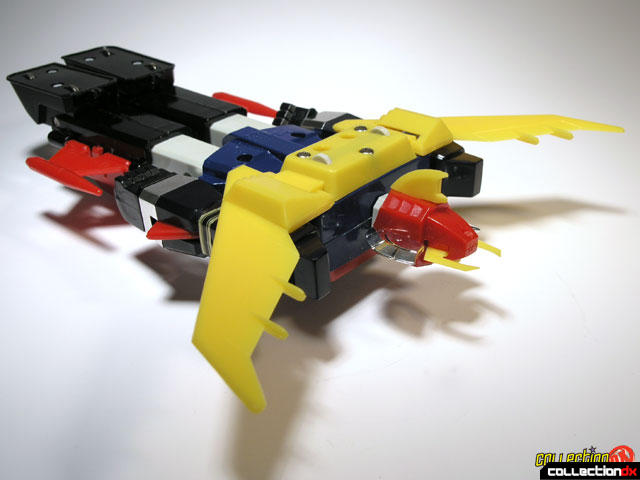 Not only is this a fun to to muck around with, but it is a work of art. It has that 70s funk, mixed with 80s mecha. Truly a beautiful toy, and one of my favorite pieces.

However, it was battery-operated and it could walk, light up, rotate on its waist and make a noisy cannon shooting sound.

Besides, it had an awesome anime-accurate head sculpt (way better than the CLOVER offering) and the paint application was mouth-watering to say the least.

It was the apple of my eyes!

Much later, I remember dismantling it (after a plastic gear cracked) and giving the external body parts plus box to an old friend of mine. I really miss it. I still have its two small light bulbs which...still light up. In the 1980s LEDs were still not invented!

Nice review Josh! Thanks for sharing.

Oh and by the way, keep in mind that Tryder G-7 was constructed mainly as a mercantile space freighter destined to carry mineral ore from other planets not as a fighting robot. He has to transform into Trider G-7 when there is an attack by some enemy robot. There is also another transformation besides the spaceship mode - namely the beagle mode which I find very, very cool!

Hopefully, Tryder G-7 will be released by BANDAI as a Soul of Chogokin by the end of this year!