Stand tall and proud metal lion. Revel in your spikes and your inexplicable weaponry, for you are almost too awesome for words.

Gokai Tiger is one of three gokins made by Takatoku from the series Gokaiser. It was a manga featured in early 80s issues of Terebi-kun, a Japanese children's television magazine. I don't believe there ever was an anime for it, but I could be wrong.

The box is awesome. Silver rimmed like all vintage gokin boxes should be, adorned with bright logos in Japanese. 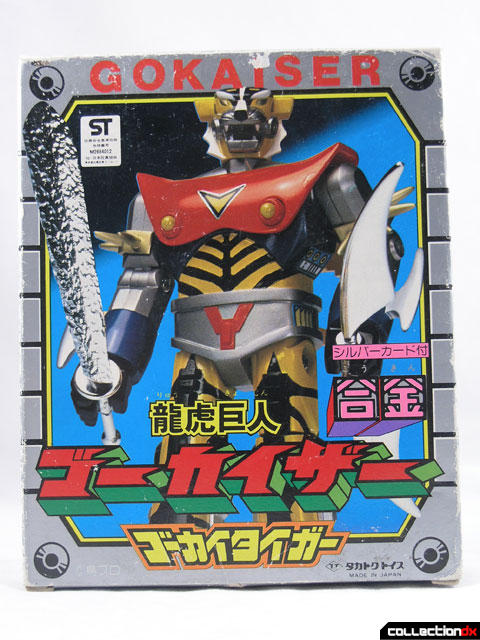 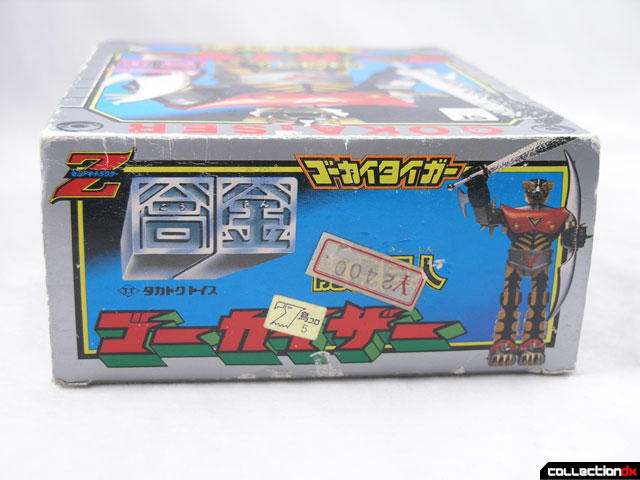 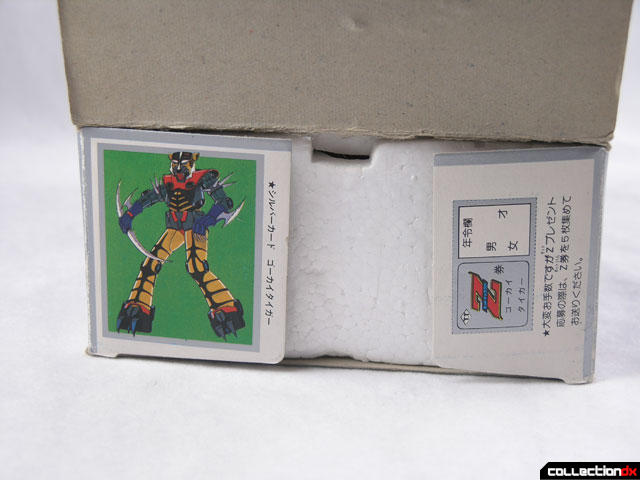 The sides of the box feature amazing cutaway drawings. 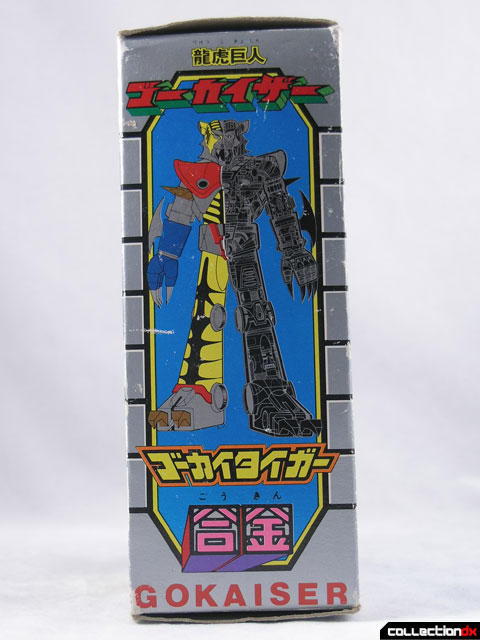 The back features beauty shots of all three robots in the line, the others will be reviewed later. 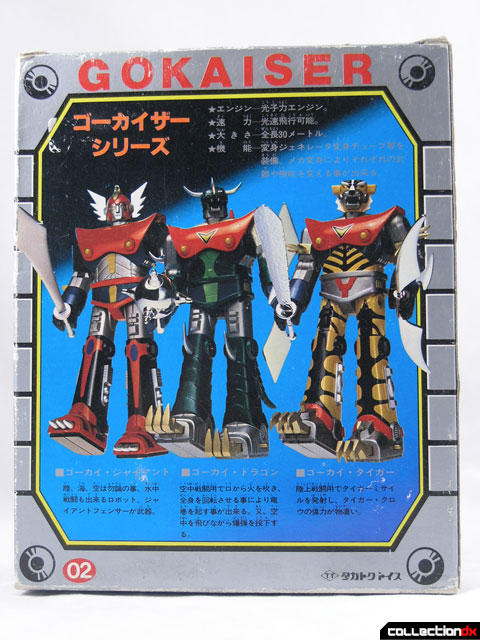 Slide the styro tray out of the box and bask in its glory. Gokai Tiger is a regal sight. Inside the accessories beckon you. They say “Come and play with us!” 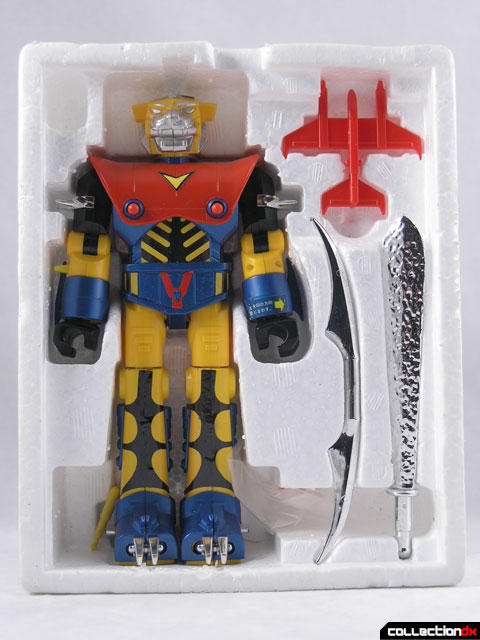 Gokai Tiger looks a bit different than the box art. This toy is simpler, less refined and more toy-like. 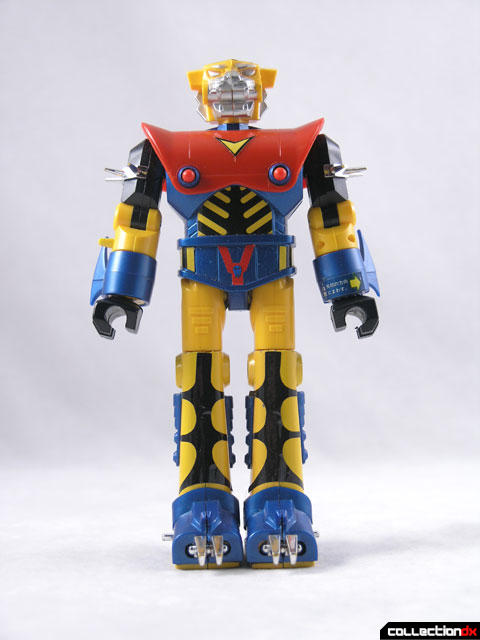 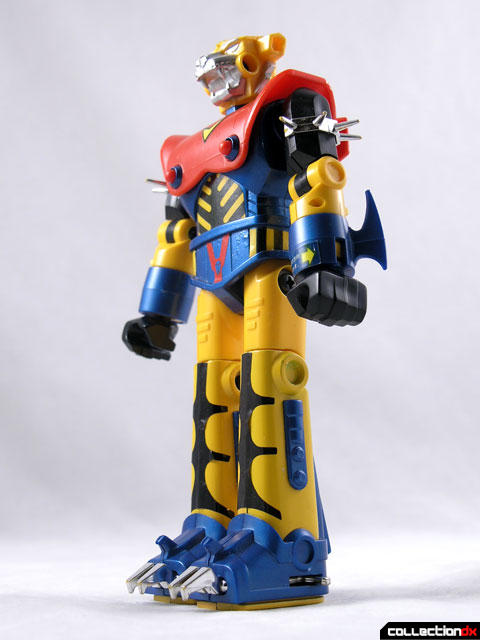 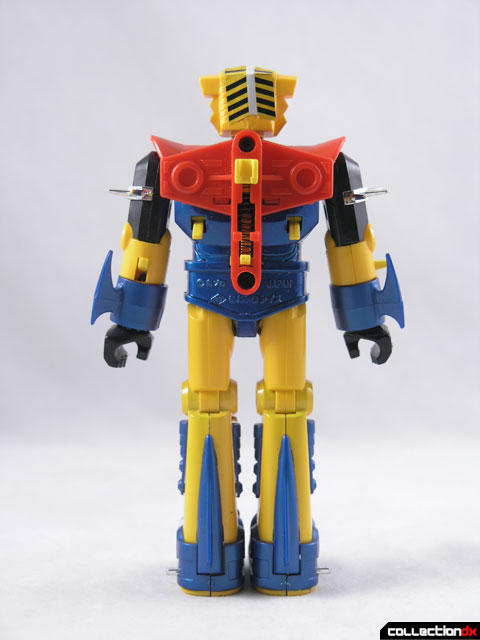 The movements are limited but satisfying. It's about what you expect from a toy of this vintage. Head turns, arms move, elbows bend, legs swivel. Things fire. The toy is loaded with gimmicks. 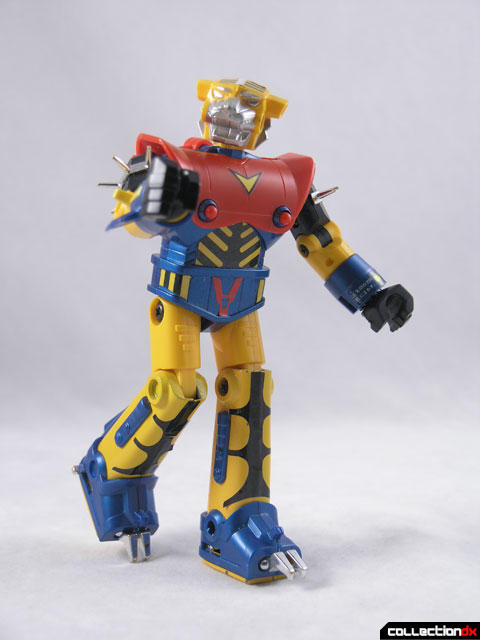 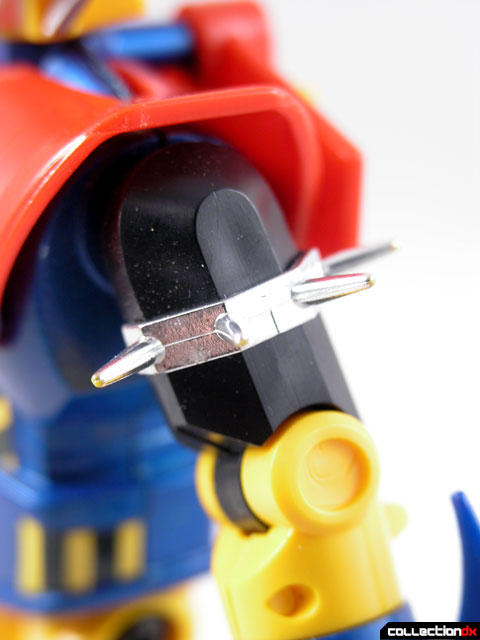 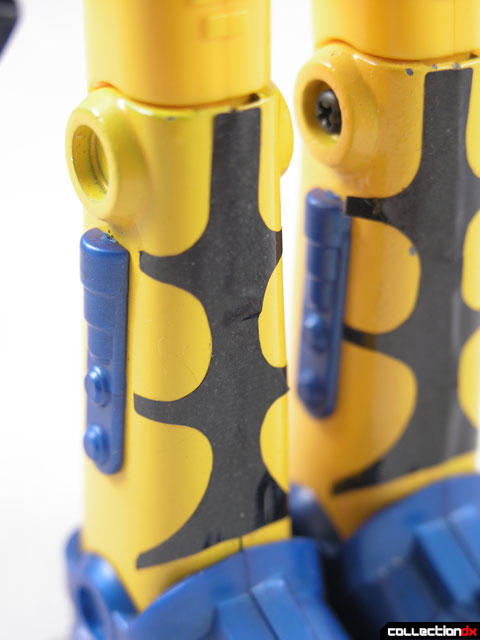 Two missiles launch from the chest with rocket fired nipple fury. They are small and easily lost. 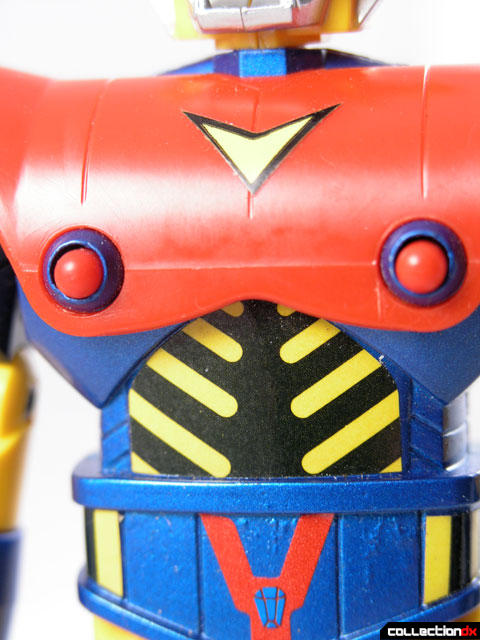 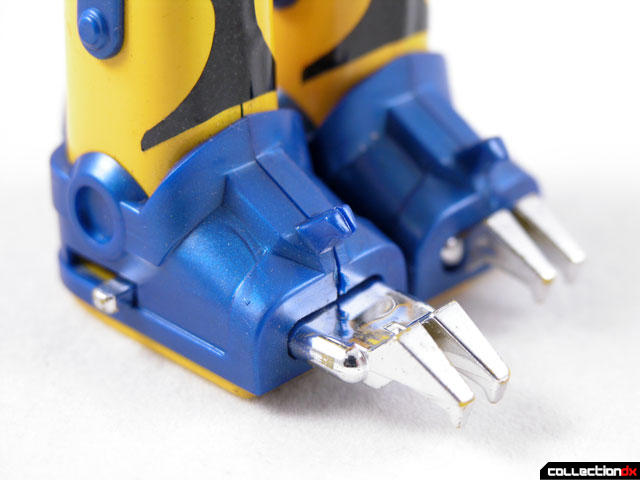 The right fist can fire, but the left fist contains a more unusual action. The fist can be wound up to build tension, and it's held in place by ratchets. Either chrome weapon can fit in the hand. Press the button and the fist spins with vicious fury! 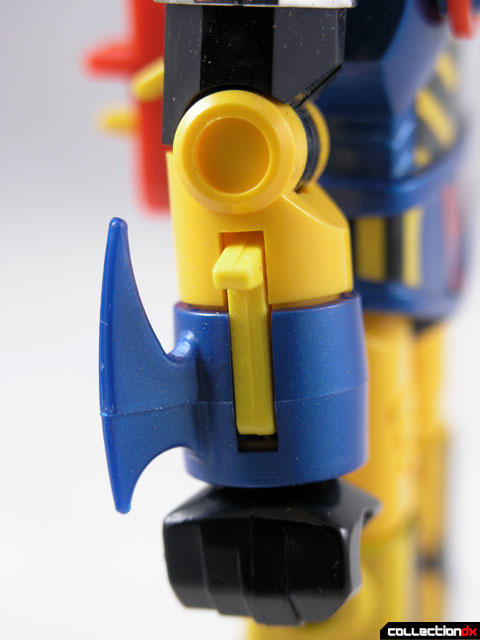 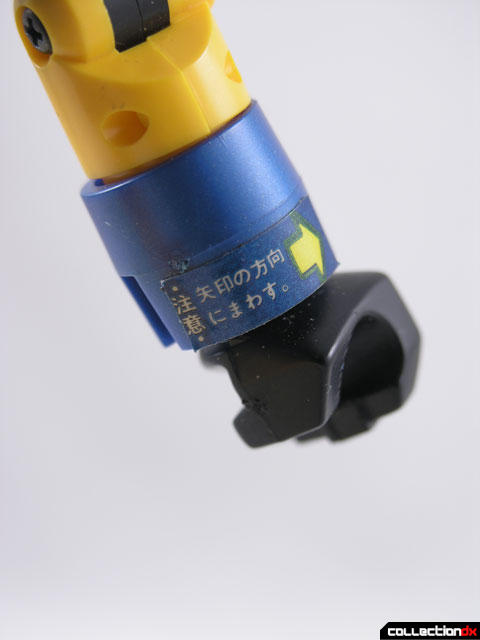 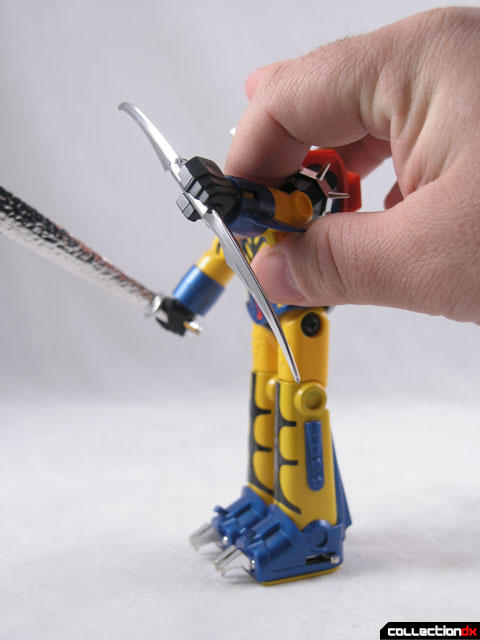 The two chrome weapons can be held in either hand. The sword has a unique texture that makes it feel ancient. 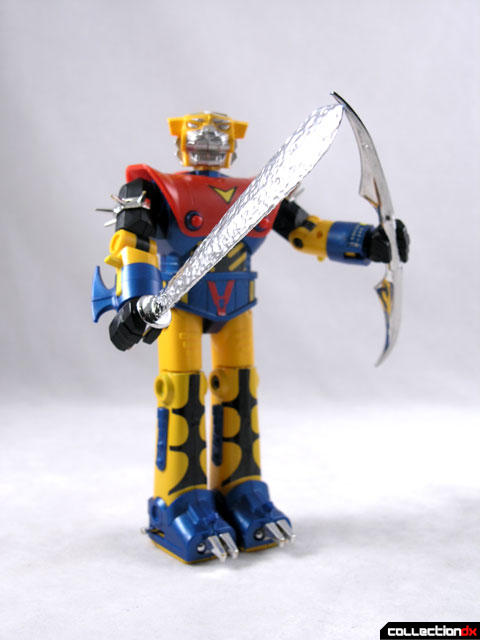 Finally, the most inexplicable gimmick is the launching plane. Dock the large red plane onto Gokai Tiger's back and then press the center yellow button to release. The fit is snug, so it just moves up rather than launches. 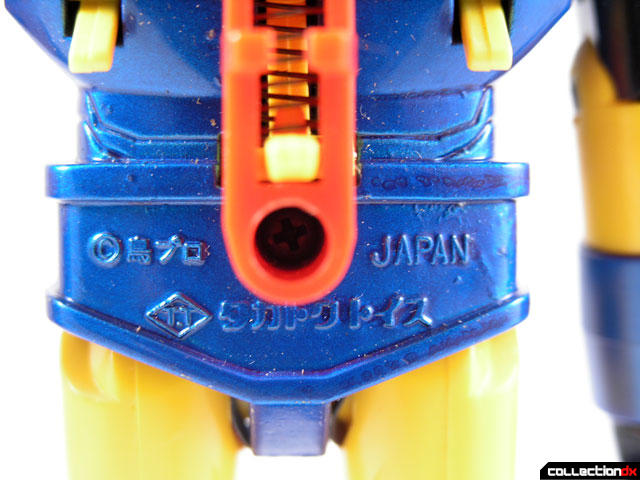 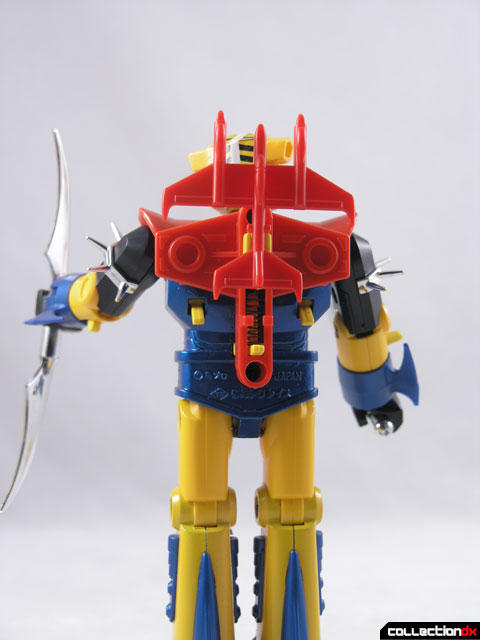 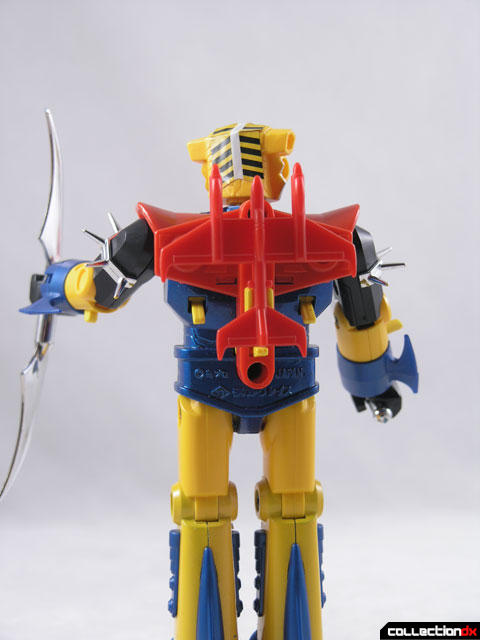 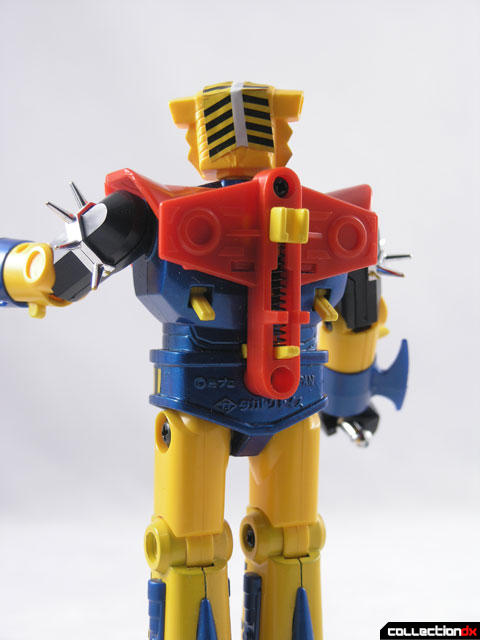 Gokai Tiger is beautiful to look at and satisfying to hold. Painted metal and sharp plastic combined with multiple gimmicks make for a classic toy.

simply amazing...I must source one of these. I love it!

Spinning fist sounds awesome! I would love to see that on video!

Fantastic toy I have never seen before. The details and articulation are awesome and I really like the proportions and blockiness. The spinning fist would be a bit hokey if not for the completely awesome directions sticker with the arrow and everything. I can totally see that being an actual warning sticker on the robot. Can't wait to see the reviews of the other two, especially the middle guy!

I own this beauty ever since 1980, and it's always been a favorite of mine.... I remember it felt so ... different, with the spinning hand (that I obviuosly misused to death) and the protruding claws....

Albeit battered and broken spiked, this is still one of the main items in my coll!

(I shall have to hunt down the other two, now, you are morally responsible for this)