Like a stone golem protecting a city, Gokai Giant stands ready to attack! 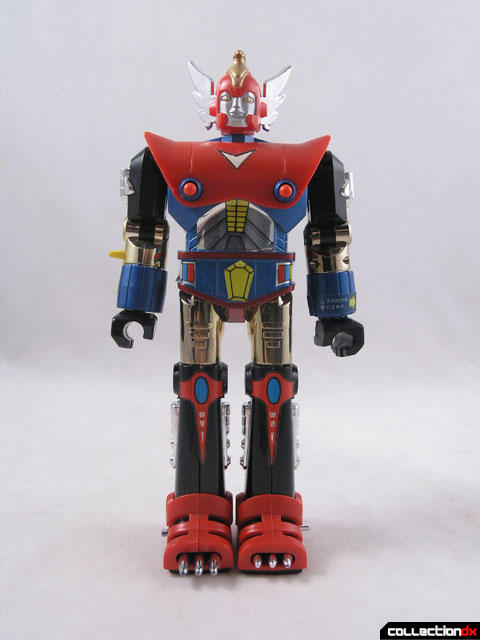 Gokai Giant is one of three gokins made by Takatoku from the series Gokaiser. It was a manga featured in early 80s issues of Terebi-kun, a Japanese children's television magazine. I don't believe there ever was an anime for it, but I could be wrong.

Gokai Giant shares many of the same parts of the other two toys in the line – Gokai Tiger and Gokai Dragon. It is unique enough, however, to be recognizable as its own character.

The box is pure Takatoku love. Taking a cue from Popy, Takatoku also rimmed their gokin boxes in silver-grey paint. Perhaps they were hoping to catch the purchase of a confused parent? Either way, it’s a marketing strategy that worked. The boxes feature other similar design elements, such as cut-away drawings on the sides. 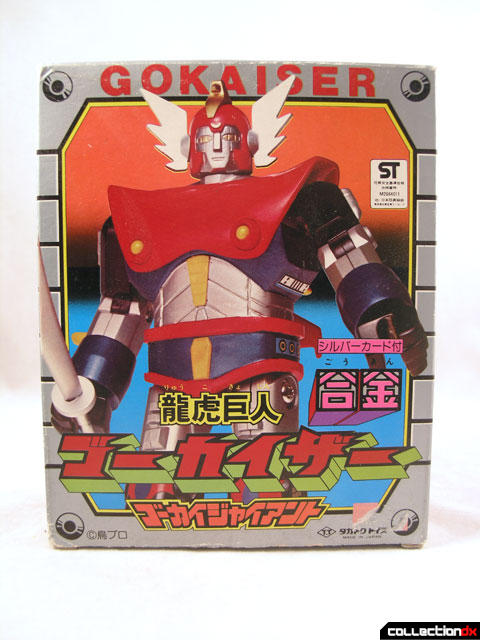 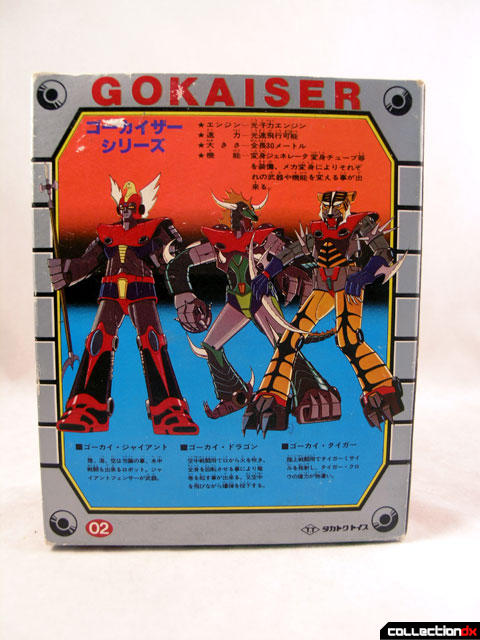 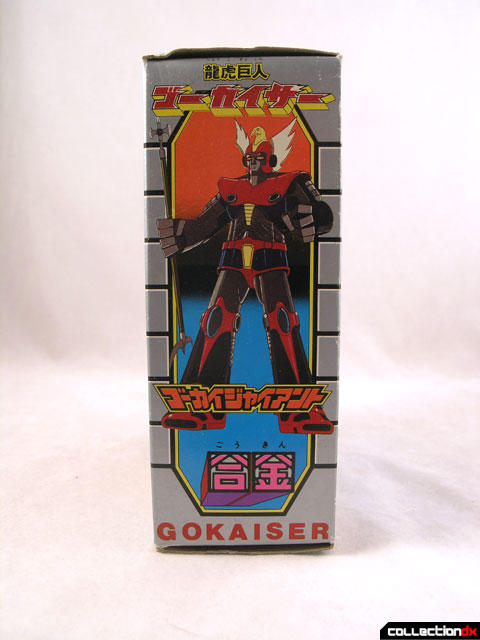 Inside the toy rests in a Styrofoam tray with a styro lid, instruction sheet, and catalog. 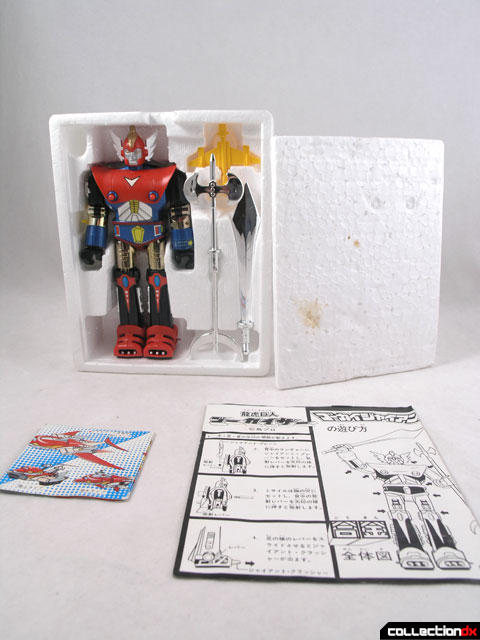 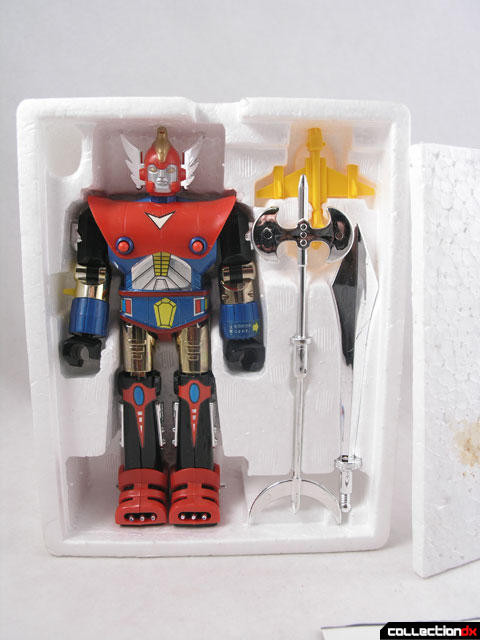 You will notice that the actual toy looks a bit different from the photos on the box. This was often the case with vintage Japanese toys as they used shots of the prototypes for packaging.

Gokai Giant is full of metal and shiny bits. You will notice that the chest, forearms, and parts of the legs are the same used on the other two toys. The gimmicks are also the same, with subtle tweaks for each character. 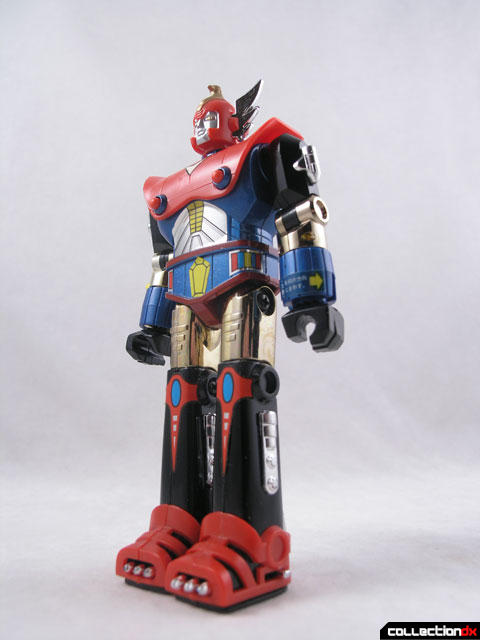 The head features chrome bird wings on the sides and a golden bird head on top of the helmet. The face is stoic, as any Japanese robot face should be. 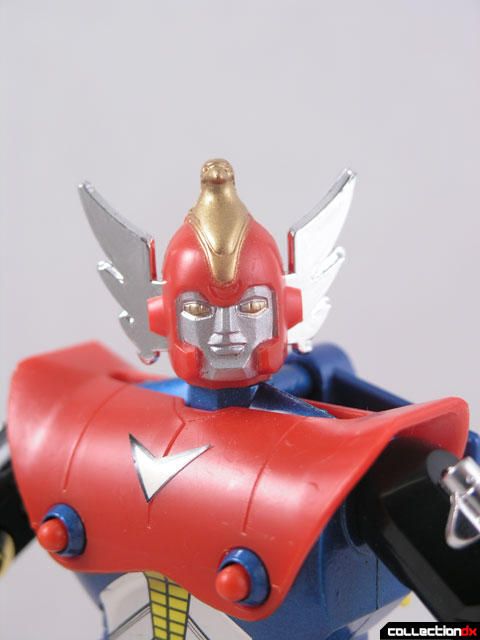 The chest is diecast metal with a plastic covering over the top. The paint is a rich metallic flake blue with assorted chromed decals. The two tiny missiles in the chest fire when the buttons on the back are pressed. 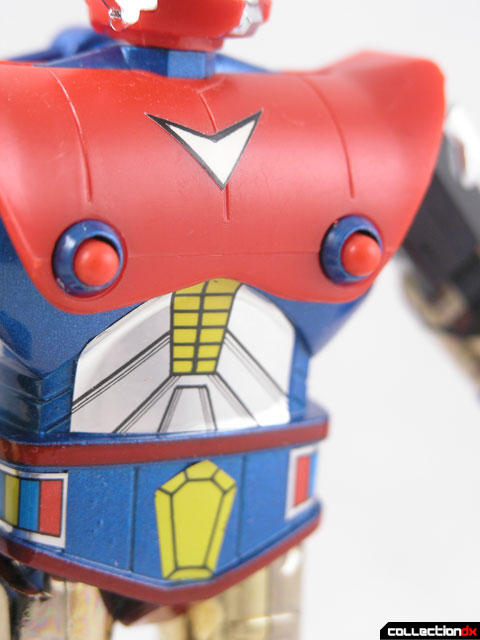 The upper arms are shared between the three models, but the chrome adornment has changed. The shoulders are on ball joints and the elbows are on swivel joints. 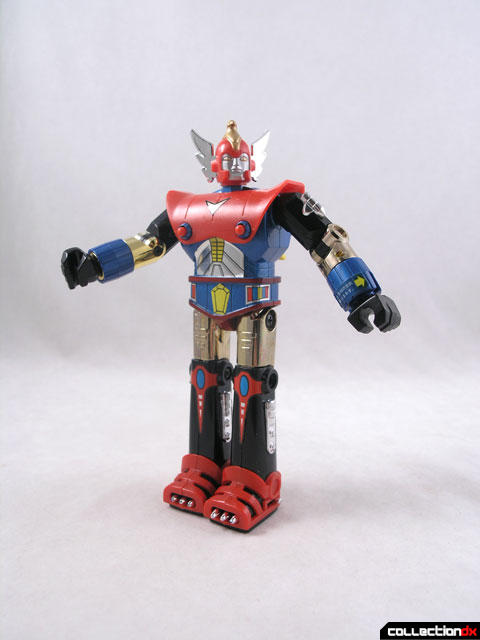 Each hand retains the gimmicks from the other models – the right fist shoots and the left fist spins with a wind-up action. 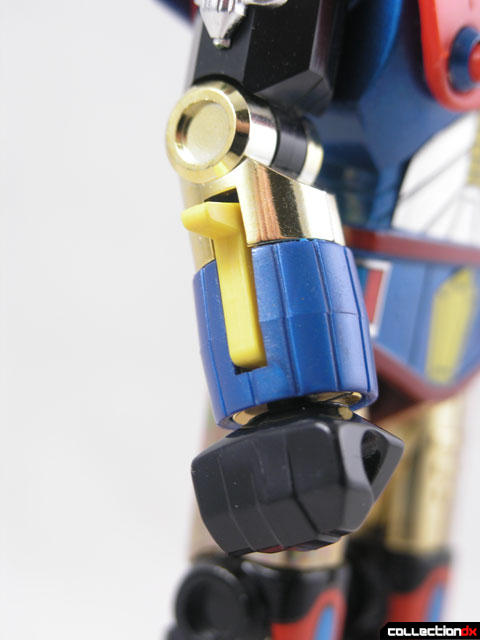 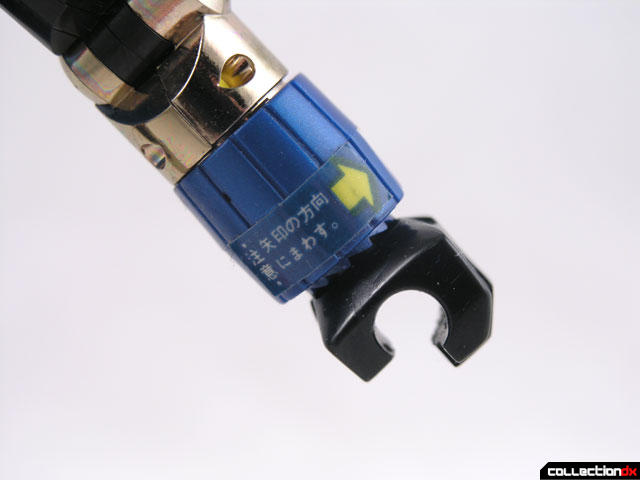 The upper legs are a nice chrome and are jointed with swivel joints at the hips and knees. The metal part of the lower legs is shared between the other toys, but the feet sections are different. 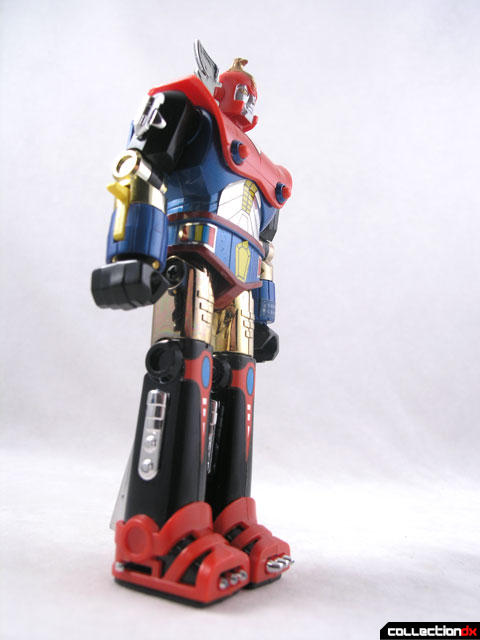 The feet retain the slide out gimmick, but this time they are pointed toes instead of claws. 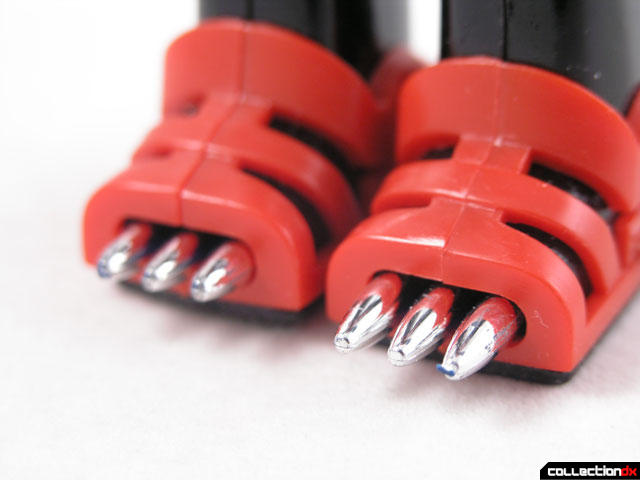 On the back of the figure is the same launcher, but this time the plane it launches has changed. 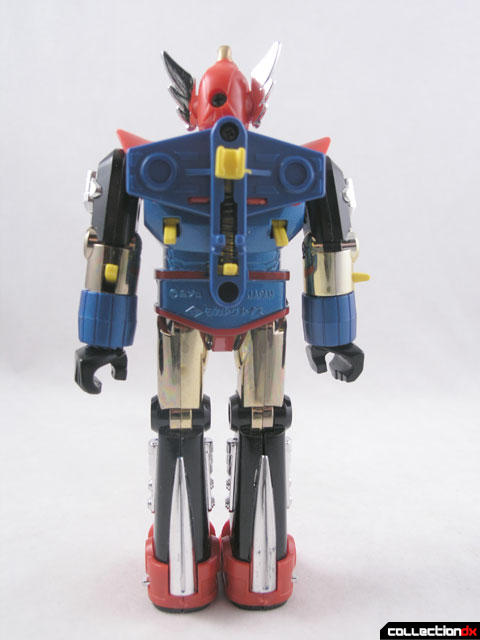 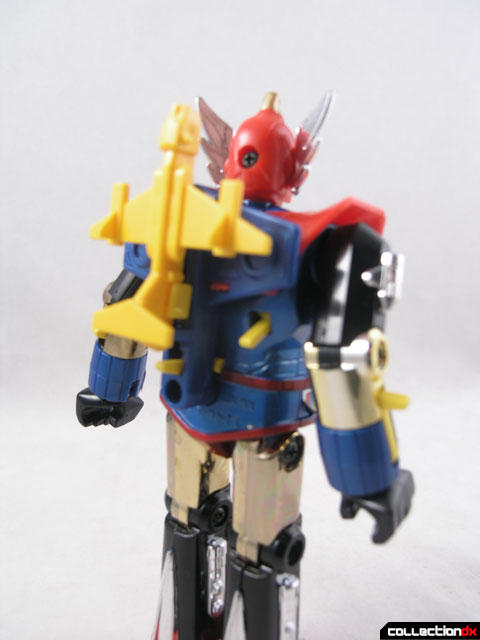 Weapons include a chrome sword and a large double sided staff with blades on it. It’s an imposing weapon, made more imposing by spin action. 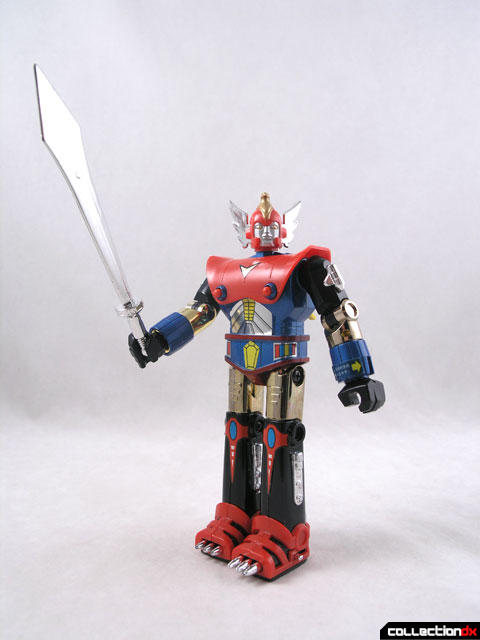 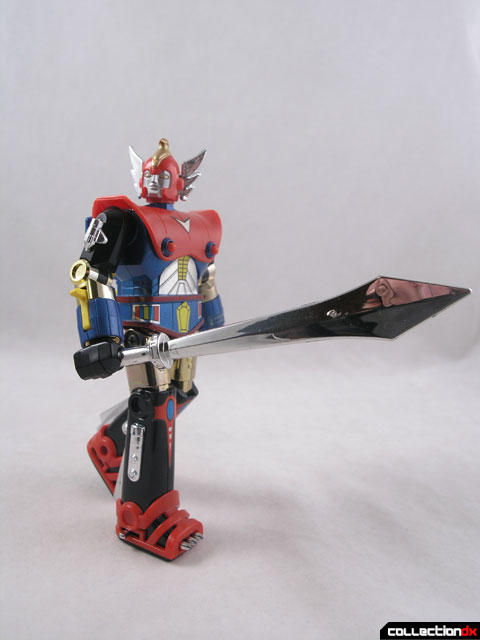 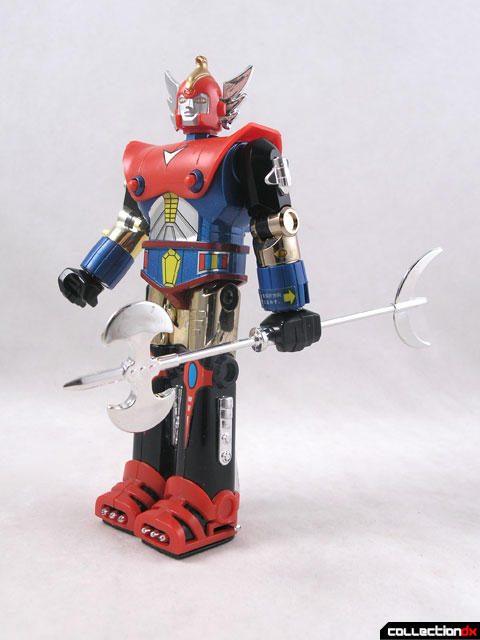 These are every thing I love about vintage Japanese toys. They are simple, shiny, heavy, funky and packed with fun. They capture an innocence and naïveté that has long since disappeared from the shelves.

I clicked on the article title before the image loaded and I was trying to figure out why I hadn't heard about a new Gokaiger mecha...

...I think you have put in the wrong plane.

That one belongs to Gokai Tiger.

Here's hoping this is just a mismatching for the pics and that you have the correct red plane for the Giant...

I saw the Tiger and Dragon version at Morphy's auction, and they left a real impression on me.
It's good to finally see images of the third mecha.

Oddly enough, these ARE the ones from the morphys auction! I bought them all bwahahahah!