I am not a huge fan of small-scale model kits. I usually prefer medium or large-scale model kits. I hate putting all the effort into something so small to have it just disappears on the shelf when you are through. A gamer modeler and painter I am not. But like everything there is an exception to the rule and my exception is Bandai’s original 1980 model kit releases from the groundbreaking anime series Mobile Suit Gundam. 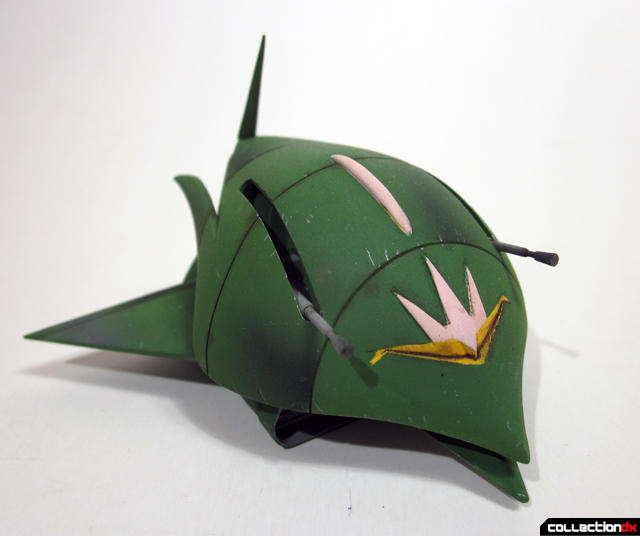 It has been said the model kits that were released after the first series run saved Gundam from oblivion, especially after the misguided Clover Gundam toys did not do to well on the market after the first series run. Not only were many of these 0079 model kits were fairly accurate representations of the Mecha of the series, they were hugely profitable even though most of the kits were priced at $3.00 to $7.00. 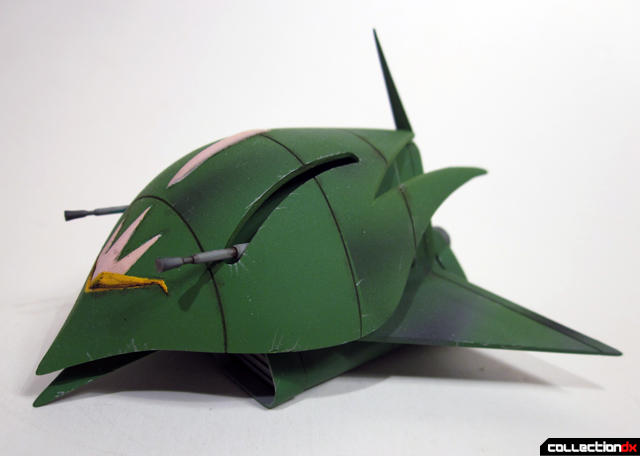 Although the minor details and articulation might be a bit dated by today’s standards, the release of these kits in 1980 is the birth of Gunpla, as we know it today. As a kid in the 1980’s I must have built hundreds of these kits from Gundam and Zeta Gundam. Maybe not hundreds but it sure felt like it, as it seems to be at least an endless amount of kit releases from the first run of models alone.

The three general scales that were represented were 1/550 for larger ships, 1/144 for small-scale Mecha and 1/100 for medium scale Mecha. All three scales are still being used today for anime robot model kits and it all goes back to this original 1980 Mobile Gundam Line. Before the 0079 Gundam line of model kits were available, most anime and tokusatsu model kits were released in an un-scaled “Boxscale” and were more toy-like than anime accurate representations of the Mecha subject. 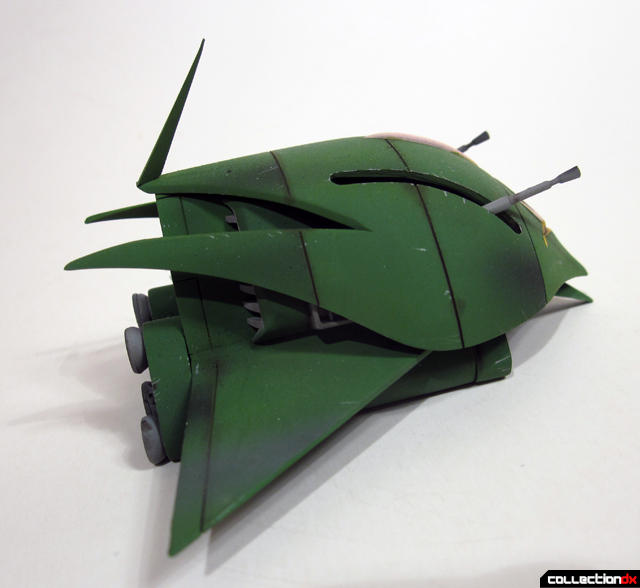 Hobby Link Japan has been stocking the reissues of these kits for a number of years now and it has been great to go back and revisit some of these kits of my youth and build others that I never have the chance to build when I was younger. 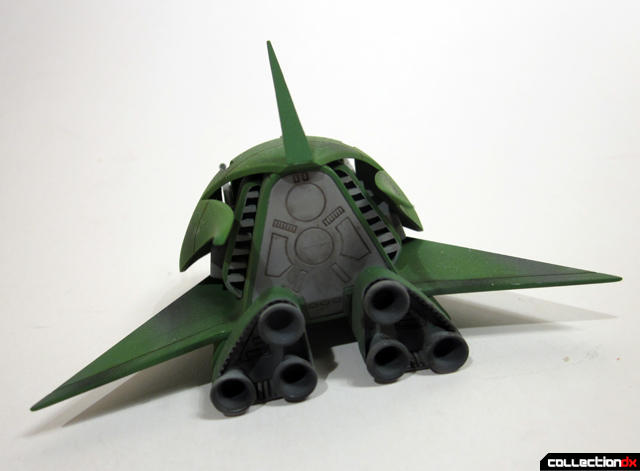 The story arc of the original Mobile Suit Gundam/Zeta Gundam/Char’s Counter Attack comes down to one defining moment and that is the destruction of the Mobile Armor called the Elmeth and death of its pilot Lalah Sune. Lalah death has a profound life changing effect on both lead characters and main rivals Amuro Ray and Char Azanable. Even in their final moments together in Char’s Counter Attack their thoughts and memory of Lalah Sune is still not far from them. 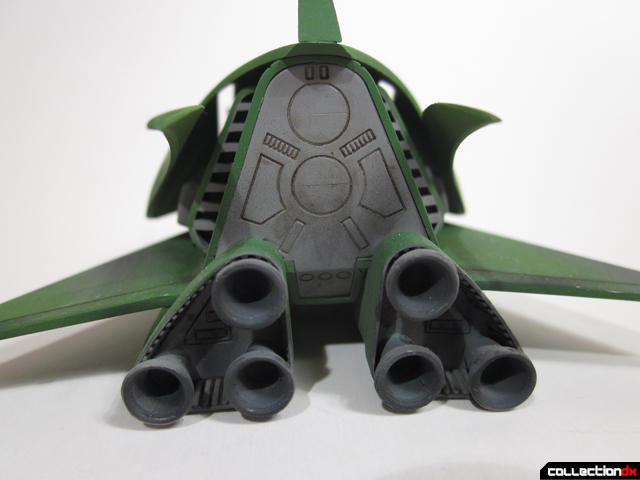 If one is a huge Gundam fan an Elmeth is a definite must for the model kit and toy collection. I have always enjoyed the art design of the Elmeth, with its graceful sparrow inspired lines and intricate rocket pod array underneath the smooth armor shell. Part of the reason for building the kit was to get underneath the mystery of the subtle but complex design of the Elmeth.

Options include: Lowered or reclined landing struts, Gelgoog comes with an extra hand with the rifle attached. 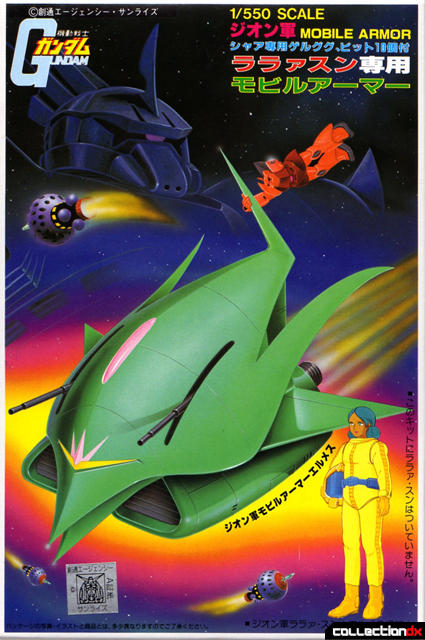 The box art on these kits are excellent and I am surprised such a beautiful box and the model kit itself is only $3.00. It seems to me that the high quality box value is worth more than $3.00 alone. Inside are two sprue of crème green colored parts. I must say that the plastic color is a nice choice and in many ways these kits unpainted seem more like today's gashapon kits and I would suggest that if you build one without painting it, the Elmeth would still look very nice due to the nice choice of plastic color. 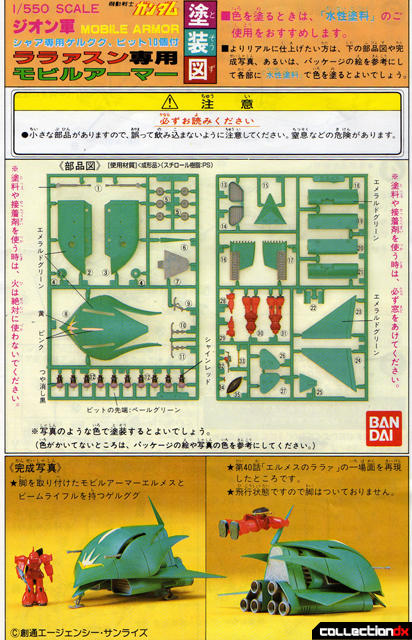 The great thing about these smaller 1/550 kits is they come with a lot of extra bonus figures and gear, with the Elmeth including a small 1/550 Geloog and ten external Bit laser pods. This is great for dioramas and adding that little extra to your display. 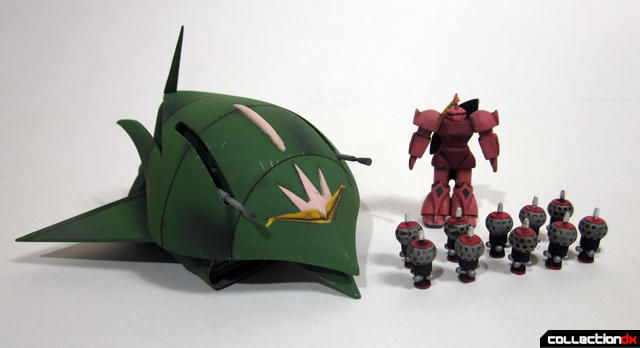 The kit is a simple and easy build and for a 30-year-old mold. I did not experience and flash or ill-fitting parts. The kit essentially it two different components, the bottom rocket pod and main body and the armor shell that in the shape of the bird. In fact I would suggest the gluing those parts as the last step of building the kit. 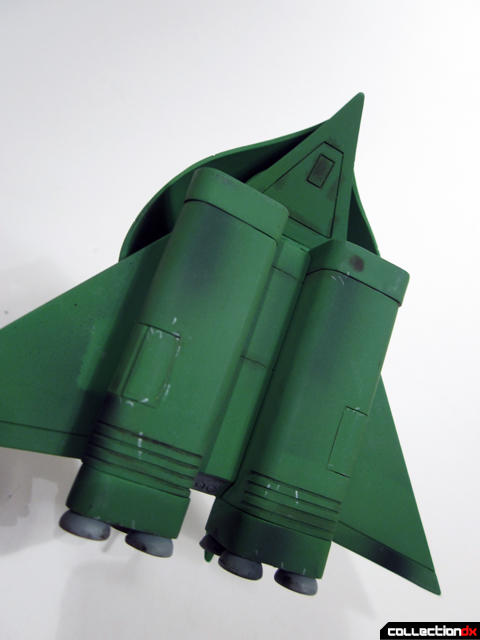 I choose to build the Elmeth with the landing struts up, as I did not want to compromise the beautiful lines of the Elmeth. This includes cutting off the landing gear part nub in the nose and filling the hole with modeling putty. I painted parts 16 and 17 separately and did not attach them until finally assembly. Parts 5 and 7 were painted grey and attached in finally assembly.

Since it is a small-scale kit it goes together fast. I thought I would try out Mr. Color for the green, as it seemed to be the only paint company that matched the funky green of the Elmeth. I have never tried Mr. Color before but I will tell you now it is the Guinness Stout of model paint as its very thick and needs to be thinned. I actually liked the paint but it is extremely difficult to locate Mr. Color in California due to stupid environment laws that California is burdened with.

The most difficult part of this kit is painting the yellow window that proved to be a nightmare to paint and mask. It turns out after I was through the yellow only goes on back lip and not the bottom lip. I know that would have made things so much easier. Next time I should breeze through painting the window. 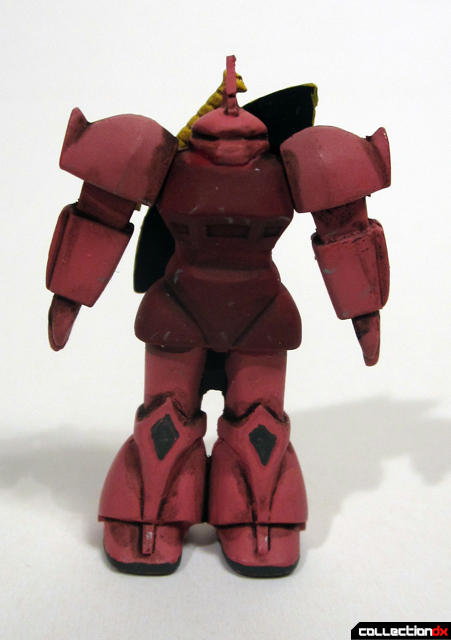 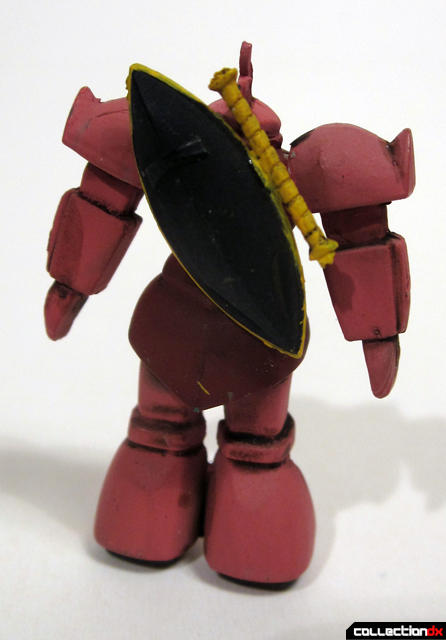 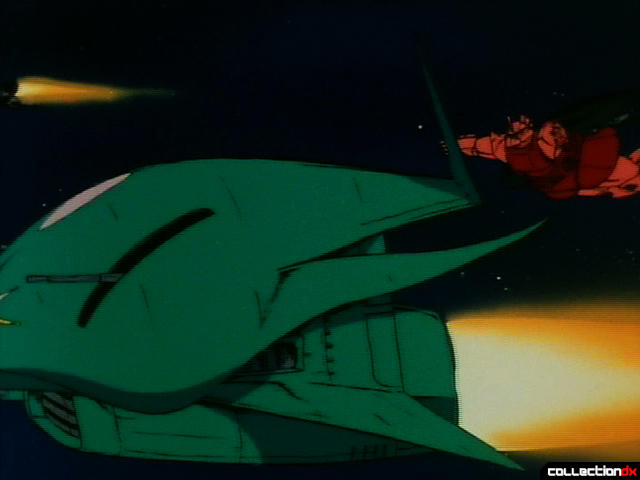 Although the Geloog figure does not have any dynamic pose, it is still a neat little figure and actually builds up quite well and looks great standing next to the Elmeth. Bandai even suggest that you can cut off the battle-damaged arm and then glue the figure to the Elmeth’s pointy rear antenna like the episode of Mobile Suit Gundam that it is suppose to depict. The only drawback is trying to paint light red over bright green plastic. 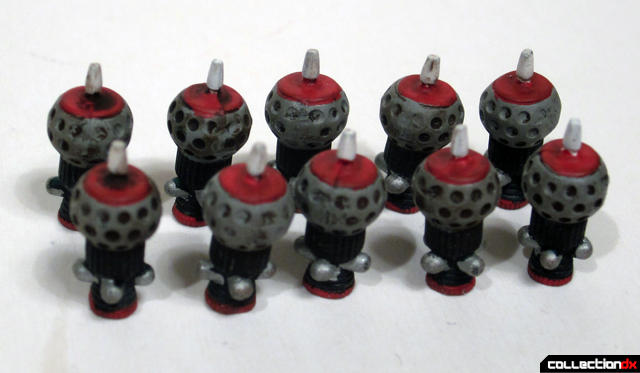 Ten Bit laser pods are also included and another nice addition to the kit. Normally I would not have even taken them off the sprue but for our beloved CDX readers I actually cut them off the sprue, cleaned them up and airbrush and hand-painted all ten Bit pods. It was time consuming but I am sure CDX and this review is better for it. Or at least that is what I want to believe.

I weathered the kit using oil paints and airbrushed exhausts and finally added silver “dents” with a silver pencil. I think I over did the battle damage but, hey, it is only a $3.00 kit and I could just purchase another. 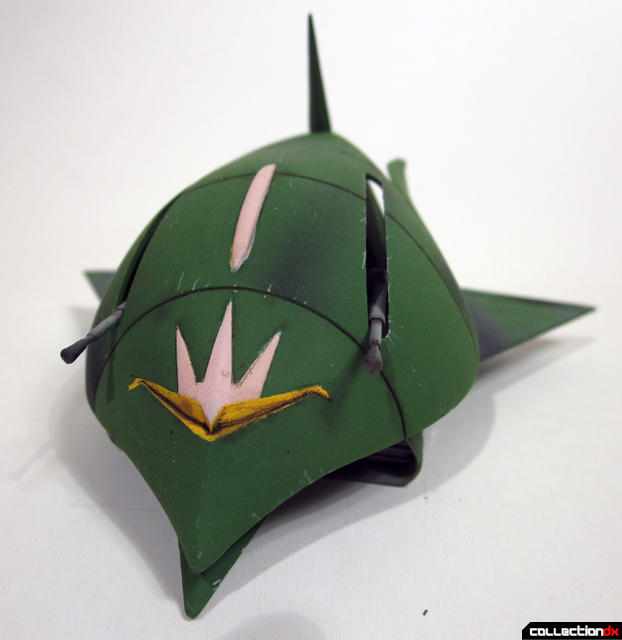 Overall this was a very fun, relaxing and satisfying kit to build. For being a 30-year-old kit it still holds up very well and Bandai still has a winner with it. If you are a beginner or a master builder you should have a great and rewarding time building the kit and should be easy for beginners to paint as the Elmeth is only one color. With so few representations of the iconic Elmeth in toys and model kit form, I highly suggest picking this one up. It is only $3.00 my friends, do it today!

Man, this is amazing. You've done the Elmeth justice with that paint job, the bits look wonderful. I'm more of a fan of the modern kits, but I had no idea that these could look this good. I might have to buy one, though I can't do as good a job as you have.

VV,
Thanks for the comments, it is greatly appreciated! Its a fun little kit and builds up to a nice representation of the Elmeth. Many of these 1980 Gundam kits still have a little life left in them. For $3.00 pick a couple up and have blast, you won't regret it!

If memory serves me right, Char was close to hitting the G-fighter with his Gelgoog's beam saber, then realized the piolt was his sister. He withdrew and the gelgoog's arm was sliced off by Gundam. Amuro was ready to finish off Char but Lalah took the hit and died. So I don't think Lalah and Char escaped together as shown on the box.

I added a screen-shot from the anime. If you have the old Bandai Mobile Suit Gundam DVD's the scene happens at the end of DVD Vol. 10 episode 39 Lalah's Dilemma. The battle you are referring to happens in a later episode.

cool! I am guilty of just watching the movie version. I needs to watch the tv series again, it has been over a decade.

There is an episode MS Gundam , Number 15 called Kukurusu Doan's Island, that was never aired in English and not on the English DVD. Accordingly it screws up the official count of the episodes by one from the English list and the Japanese list.

I guess Tomino never really liked the episode and its considered the "lost" episode. I'm sure its on youtube but I haven't got around to watching it.