This is my first review, and I am not totally sure where to start.

I guess the beginning is as good as anything..... 1988, the year we got our first VCR. We went to get some videos. On that day I got 2 videos, one was Fraggle Rock, the other was Star Fleet- Space Quest for F-01 (I still have both videos in immaculate condition). Since then I have had a love of Star Fleet, and in particular, the robot from the series, the Dai-X. Originally called X Bomber in Japan, it was re-named Star Fleet for the UK and it aired in ’82. One notable difference between the UK and Japanese versions is the UK’s superior theme music.

Back then I wanted a toy of Dai-X so much. Flash forward to December 2002, I was starting collecting G1 Transformers, Thundercats, and dabbling with MOTU, G.I. Joe, M.A.S.K. and various other 80’s toy lines. At this time I was getting a UK based magazine called Model and Collectors Mart, which always reviewed figures, and had articles on old toy lines and adverts for various shops around the UK and some State side. To my utter amazement in the advert for Offworld (long since out of business), pictures of their shop and contact information, there it was... Dai-X. Not just Dai X, but ALL the various Star Fleet toys. This set about an internet search finding out all I could about Star Fleet. What I discovered was, it was originally called X Bomber, there were various toys made, and they were far too expensive. At this time I called Offworld and found out the Blitz Krieg Combination Big Dai-X went for around £200 MISB.  At the time, for an unemployed 17 year old College Art student, the prices for any of the Dai-X toys were far out of my price range for one toy. I finally bit the bullet and used some cash from selling various Transformers, etc. on eBay to purchase the one robot I always wanted, Blitz Krieg Combination Big Dai-X! Big shout out and thanks to Albert Penello.

Now, enough of my story, and on to the review. For arguments sake I will be referring mostly to the English names. 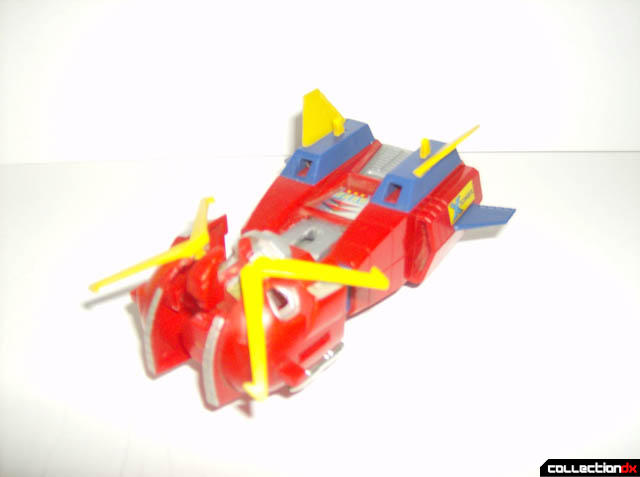 The smallest of the three ships forms the head of the mech. It is pretty light, and aside from the front section, not the most interesting of the group. It has two missile launchers. It also has retractable landing wheels made of metal and plastic. I wish the cockpit had been made of translucent blue like the other ships. Braincom is definitely the least show accurate of the three, but then that is not necessarily a bad thing; otherwise it would just be the head with the face opened up. All in all a nice ship, but not the best of the three. 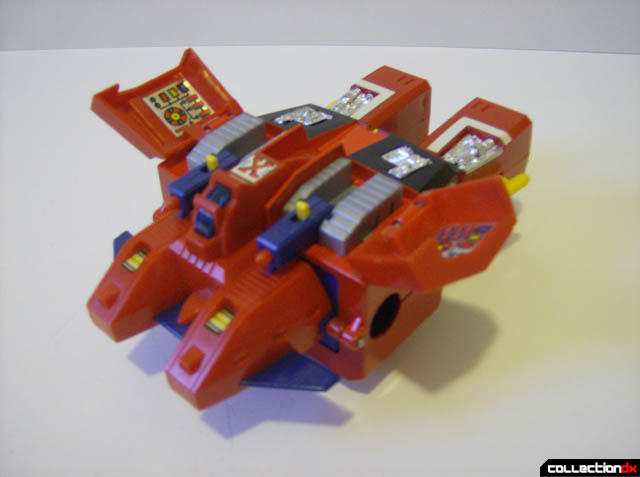 The second largest ship forms the body for the mech. Packing the most diecast of the three, the entire front and back sections are made of metal, like a metal armor clam shell. It also has metal and plastic landing gear, and boasts a beautiful, ingenious way for the landing gear to retract. It also has two missile launchers on top. Unlike Braincom, this is quite show accurate... having said that, for it to be show accurate it involves kind of being left between ship and body. It is a great ship and definitely my second favorite of the three. Also just to point out the missile launcher canopies, which open to reveal the missiles, are featured in the show. 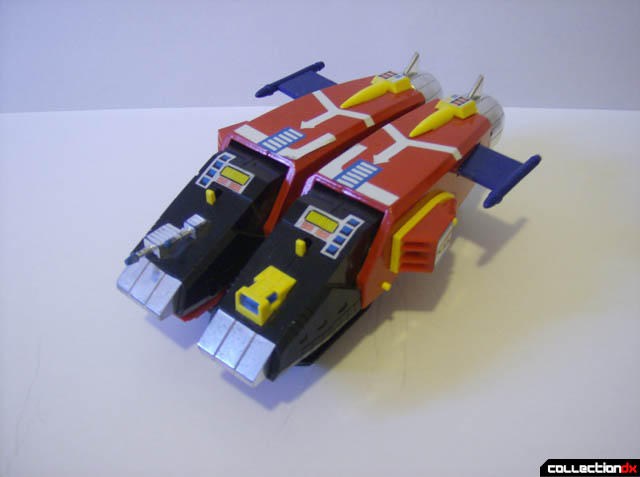 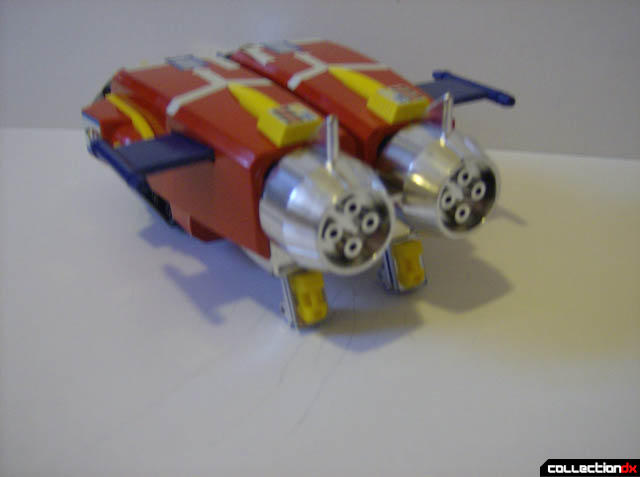 The largest of the three ships forms the legs. Legtrax also has a lot of diecast, nearly as much as Mainbody.  It has two missile launchers on both sides, which can be rotated, and both front sections are also projectiles. Like the other two, it has the metal and plastic landing gears, but Takatoku included the same feature as on the Macross Valkyries, the nail hurting spring loaded landing gear. This is definitely my favorite of the 3 ships.

Standing at 12” (well 11.5” to be exact) Dai-X is an impressive robot. Dai-X was designed by Go Nagai, and is caught somewhere in between the classic super robots of the 70’s and the mecha from the 80’s, which just makes him all the more cool, in my opinion. 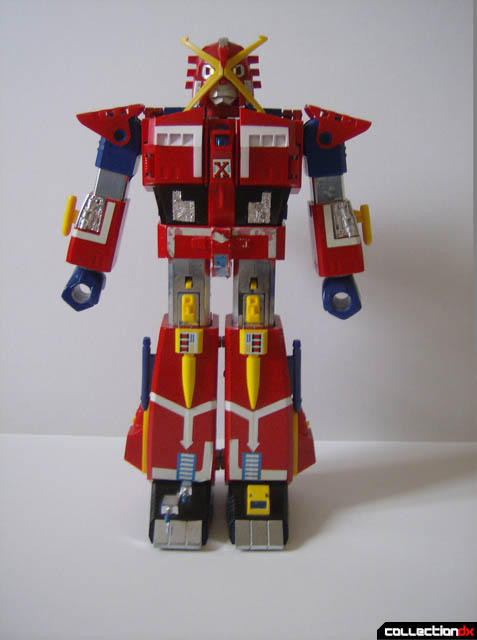 The head is very reminiscent of the Gundam robots. 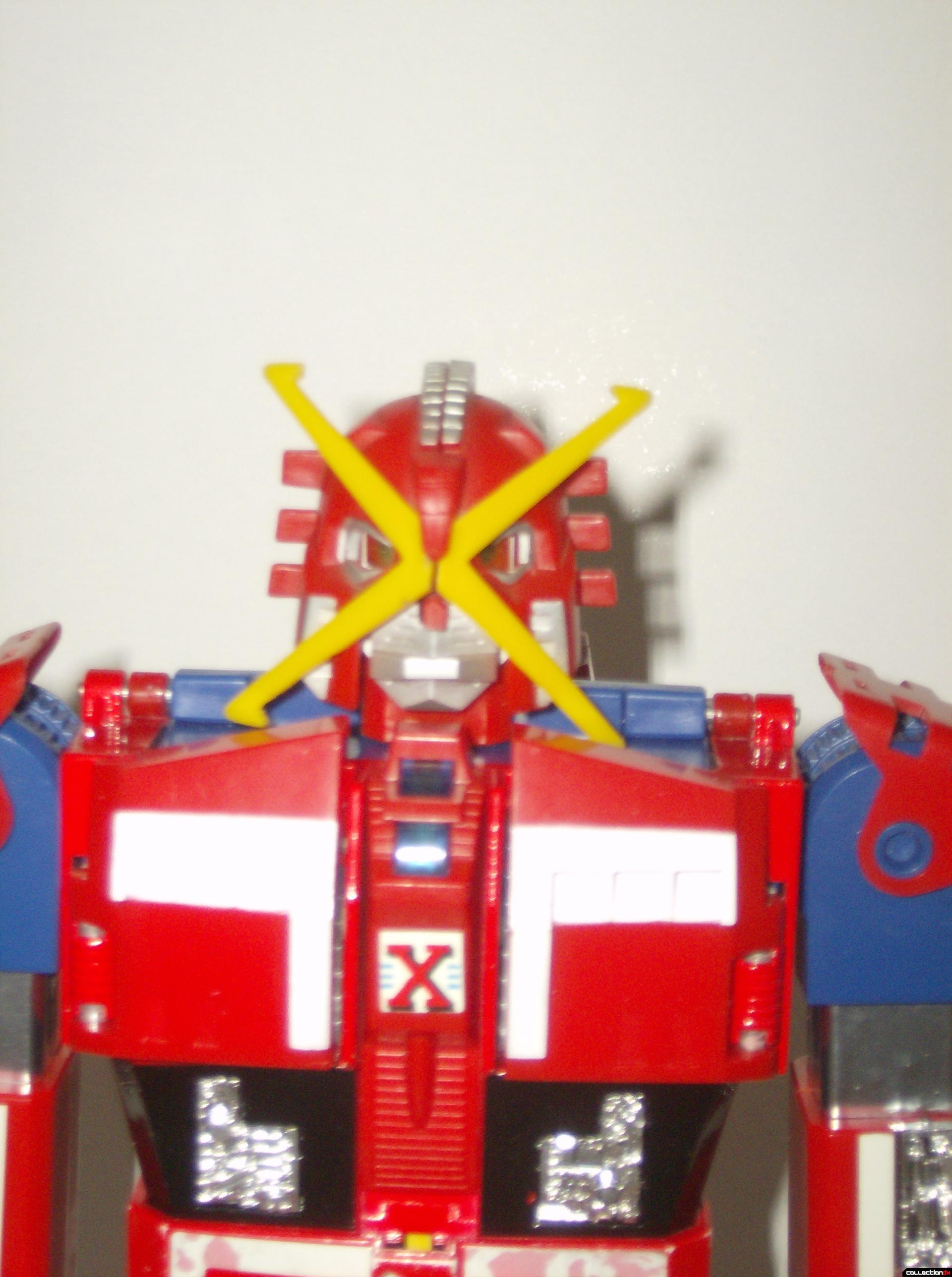 First off, he is heavy; the chest, back and lower legs are made of diecast. He also has a lot of nice chrome parts. 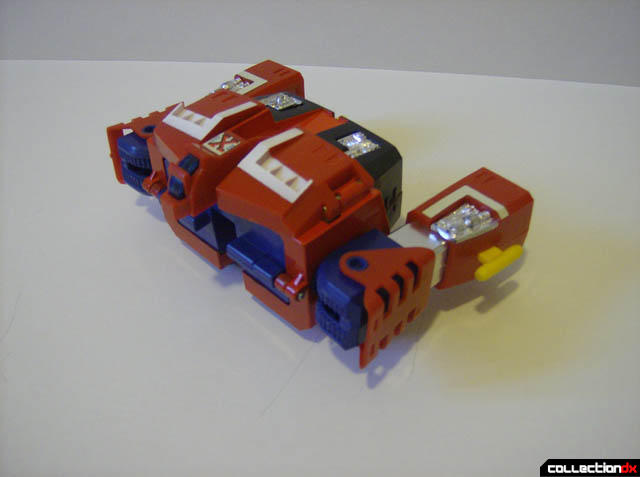 He definitely has shelf presence, and unlike a lot of combining robots, he has a unified color scheme much like Transformers Devastator, or Ideon. Articulation is very limited by today’s standard, but has better articulation than many other robots of the time. He has ratchet shoulder joints allowing his arms to do a full 360 degree turn and rise fully out to the side. That is pretty much it. 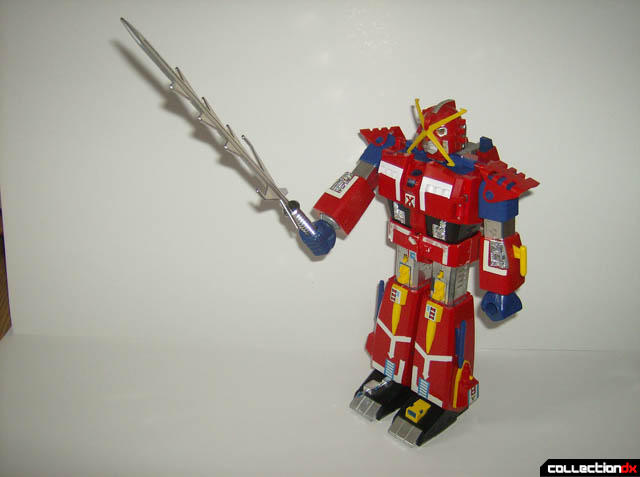 Like a lot of robots from this time he has the signature firing fists. Having said that, only the right on mine seems to work, but the left fist is definitely designed to be fired like the right. He also packs a lot of fire power with six operational missile launchers. 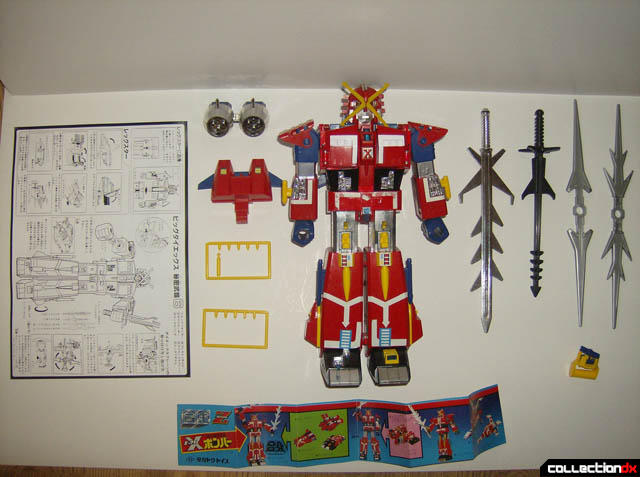 He also has spinning blades, a large black sword, and a beautiful large chrome sword.

For me this toy has been nothing but so much fun to finally own and play with. The only negative drawback to the whole toy is the price... I would love to own a mint boxed one, but I just can’t bring myself to part with that much money. This cost me £294, then an added £70 for customs charges.

Would I recommend him...Yes, if you are a fan and you can afford him and, like myself, really must have him. Aside from this there are only a few other Dai-X toys on the market and this is by far the best of all of them. He is a big brick of a toy, but a very nice looking, heavy, fun brick of a toy.

I hope this review exposes many more to a somewhat unknown show and amazing robot which dearly deserves a modern update in Bandai’s Soul of Chogokin line or CM’s Corp brave Gokin etc. Judging by Bandai’s S.O.C. Ideon, they could do an amazing job on Big Dai-X.

P.S. X Bomber had a much larger fan base in the UK than most people realized. On TV at the time, it was rivaling Gerry Anderson’s Terrahawks. It was so popular that rock legend and Queen guitarist Brian May did a cover of the theme tune and released an EP with fellow rock legend Eddie Van Halen called Brian May’s Star Fleet Project. How many shows can boast that, and how many robots can claim to have been featured on an EP cover? Exactly.

Star Fleet the complete series is now available in a beautiful collector’s box set in the UK, released by Fabulous Films.

Thanks for the great review of a somewhat neglected toy! I guess the fact that Star Fleet was just never as popular in the US as it was in the UK (and, of course, its somewhat unknown even in Japan) means that the toy line tends to get a bit overlooked, which is a real shame - I have the smaller, non-combining (though it does transform!) Big Dai-X DX and its a lovely piece of metal.

I keep hoping that sooner or later Bandai will get round to doing a Soul of Chogokin version...

Not that Starfleet was unpopular in the USA, it was just rarely shown. When I watched it back in the 1980's it was only shown on HBO. HBO used to show Thunderbirds 2086 as well, with Dyanman on VH1 Friday Night Flight and Mysterious Cities of Gold on Nickelodeon. For the kids that watched them such as myself we LOVED these shows. The big problem was these shows were on cable. Unlike today few people had cable TV back then. I actually loved Starfleet show and recorded it on VHS when it was shown and I still have the VHS tape! The best of the show was when they formed the Robot at the end. That was a mindblowing moment! Still one of the greatest dramatic Gettai's ever!

In the UK and Ireland is was a much bigger show.

Starfleet was also remembered by some with Queen's Brian Mays' Starfleet Project 12inch EP with Eddie Van Halen, Phil Chen and Alan Gratzer. Brian May's son was a fan of the show and that got Brian to think of covering the theme of the show. That is actually when I first say Bid Dai -X on the cover of the LP as my brother had the record. So when Starfleet was shown I already thought the robot was cool! I still have the record and I already located Phil Chen and he signed it. I'm working on Eddie right now as we work with on his various projects. A must pick up Tokusatsu related record to own.

The review is awesome, I so need Big Dai X right now!!!!

Thats a good point, actually, one I hadn't considered before. Back then, there were only three TV channels in the UK (I'm not sure Channel 4 had actually started then!) so to a certain extent, I guess Star Fleet sort of became a hit almost by default...! (another factor, though, might also be the popularity of Gerry Andersons productions, which created the right sort of imaginative environment for kids to be used to puppet based science fiction shows... )

Yes I also would love a Soul Of Chogokin version of Dai-X. The smaller Dai-X is also a very nice figure.

You may want to take his arm apart if the launch mechanism isn't working. Launching mechanisms are one of the easier toy fixes. Better than the nightmares that can confront you if you're into 80's batt-ops like me. Chances are you just need to replace the spring, or lube the button mechanism.

Speaking of Batt-Ops robots, I had a great robot from the Guardian Defender(?) toyline. It was a large white centaur like robot with 4 legs and came with a Sectaurs style figure. I loved that robot but due to age the arm broke and could not be fixed.

Thank you for the kind comments on my review. Sorry I never replied. I had some computer problems and could not access this site to log and reply.
Sadly since I wrote this review I ended up selling this great piece.
As much as I loved it I really needed the space, so I sold Dai-X to a buyer in the USA.
It really wasn't worth the cash I spent on it and I barely got 50% of what I paid for it.
If I had, had it from new and it been in better condition I would have kept it but as it is the space and money was more appealing to me.
I still hope Bandai or some other company release a better Soul Of Chogokin style Dai-X. If they do I shall probably buy 2 lol.

Really, it was on HBO? Granted that was before my time but that's interesting (knew it was made into the Crappy compilation movie the Thalian Space wars and the search for F01 and on VHS but not on actual tv)

The LEFT hand spins! It doesn't launch, when you turn it clockwise it loads a spring. When you press the left yellow "lever" above the fist it releases the catch and the fist will spin.... when you attach the spinning blades to the fist it will then give them a cool spin attack!

One of the coolest gimmicks on a DX robot!