This is a bootleg of the Nomura ST Baldios... or is it?

In the world of bootleg toys, sometimes things are not what they seem. Sometimes the toys are obvious bootlegs – cheap materials, weird alterations, or lack of copyright or manufacturing information. Other times it's not so clear as to what is a bootleg and what is just something that has produced for a foreign market. Consider the case of this ST Baldios by AL-ES (Originally by Nomura). 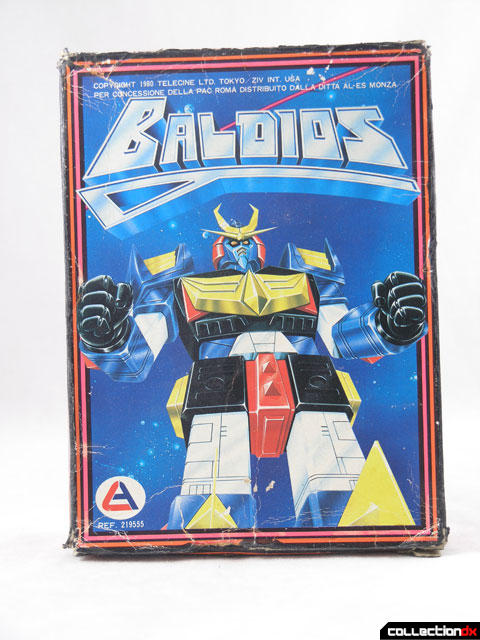 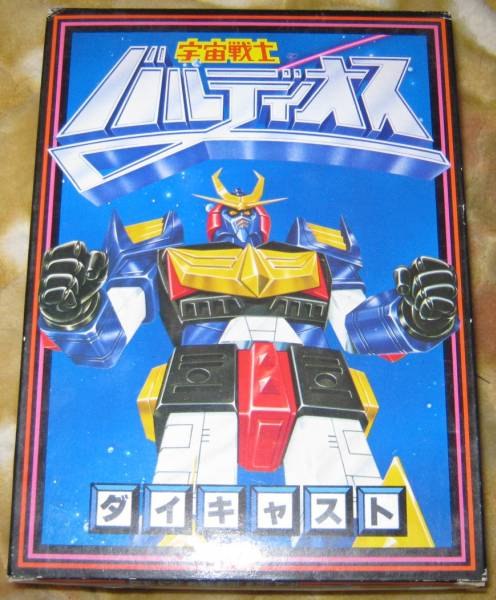 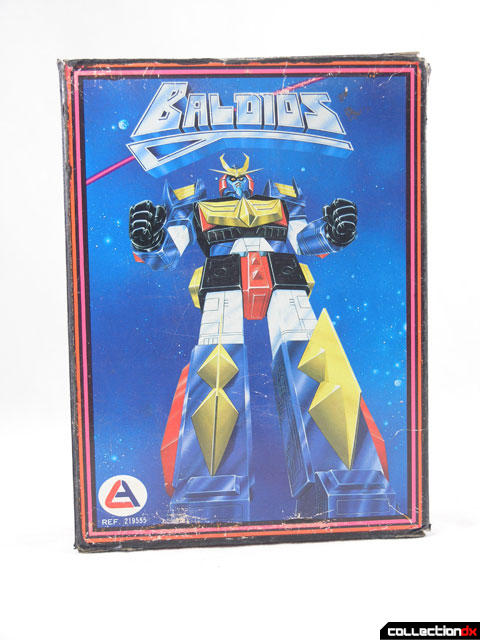 The box is similar to the Japanese release box, but obviously the Japanese text has been removed and replaced with Italian. The logo has been replaced with the English title, but the art for the robot is the same. In the bottom corner is the logo of the manufacturer, AL-ES The text on the front of the box reads:

“Al-Es Monza” was an Italian toy company which specialized in licensing and importing Japanese character goods in the 1980s. They were owned by the Fassi family until 1987, at which time they were acquired by LJN. AL-ES most known in our circles for their Junior Machinders.

The statement above basically says that Telecine and Ziv granted a license to AL-ES to sell these toys in Italy. Ziv International was a company that distributed Americanized versions of Japanese Anime in the late 70s and early 80s. It does not look like they ever released Baldios in the states, but just held the license. It's a good sign that there's a copyright statement, but I haven't been able to find anything about “Telecine Ltd. Tokyo”. The side says “Made in Singapore” but of course the original toy was made in Japan. 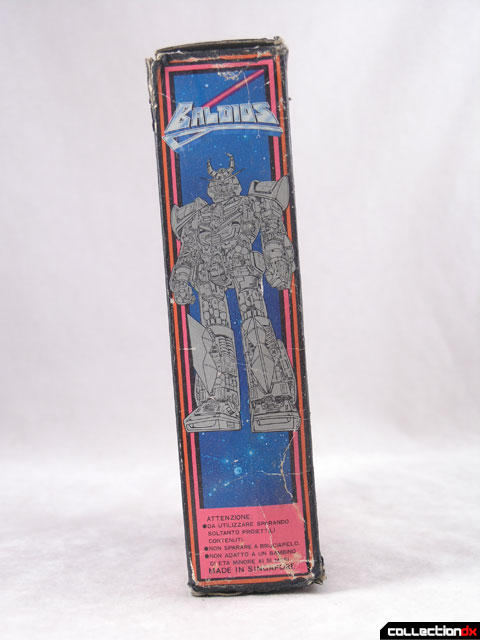 At this point – what do you think? Bootleg or not? Lets look at the toy. 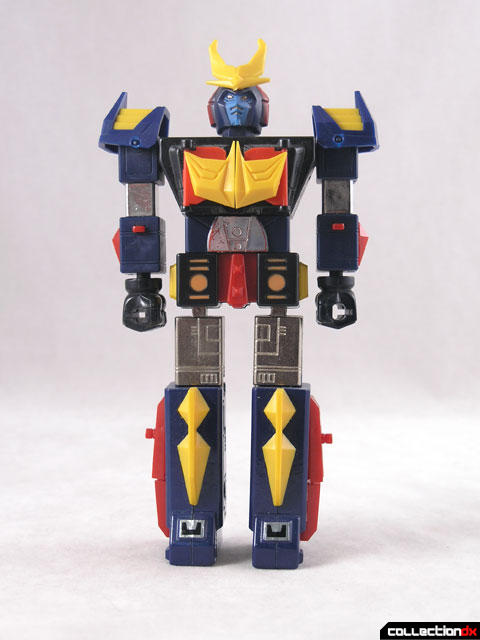 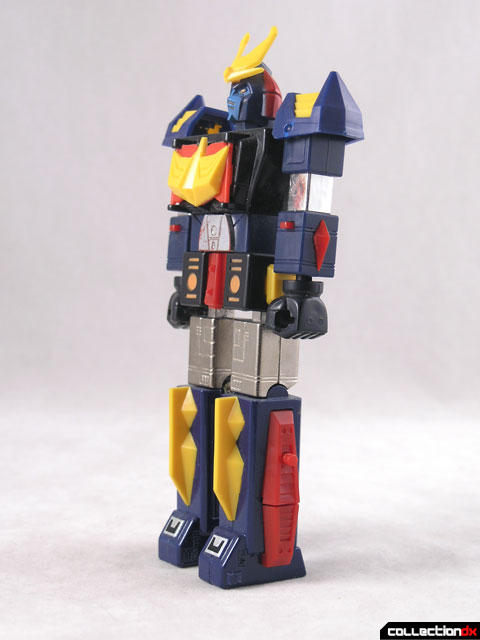 Inside, the Styrofoam is the same as the Japanese release, and the accessories are the same. 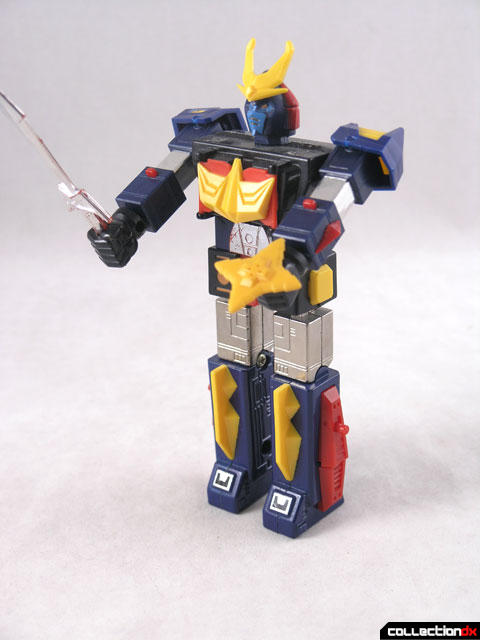 The toy is basically the same as the JP release. Same paint, same decals, same gimmicks, same build quality. The only difference is the copyright information stamped on the back. Instead of the Japanese text, it simply says “Made in Singapore” 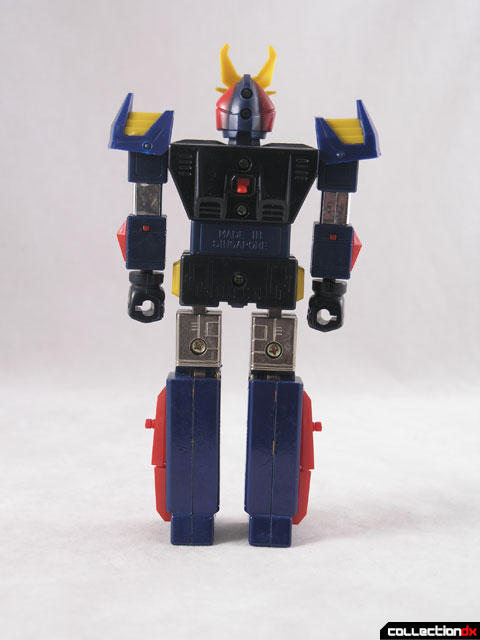 It's a simple gokin. Diecast chest and legs. Firing fists. There's a unique disc launcher in the chest behind two doors, and pull-out missile launchers on the legs. All retain the functionality of the original. 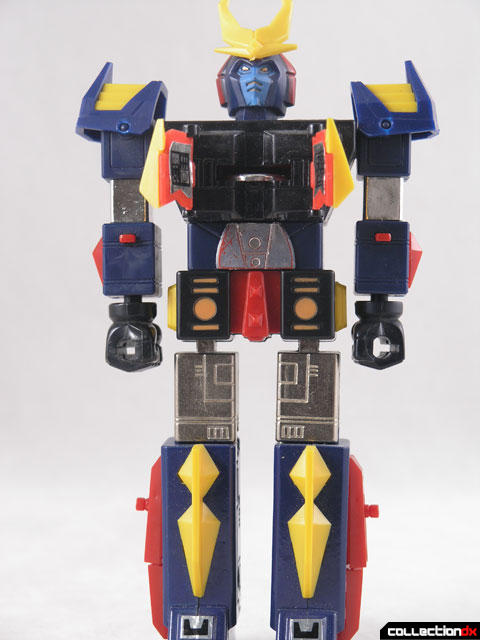 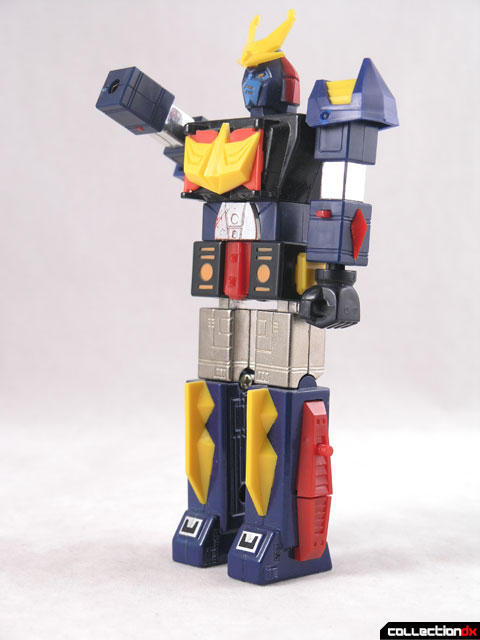 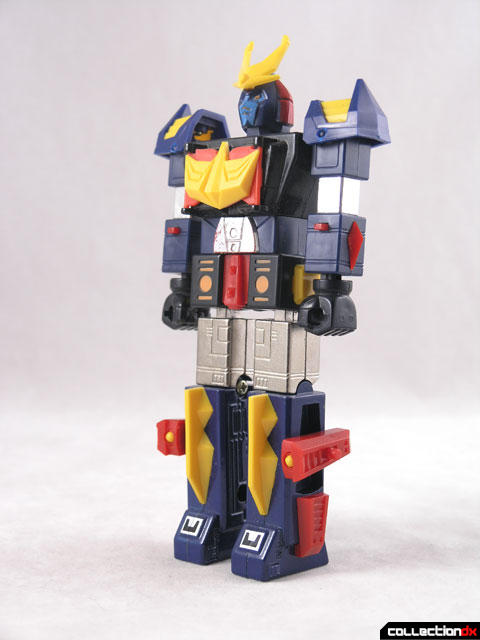 To me, the core of a bootleg toy is its unlicensed nature. I don't see that in this toy. What I see here is a foreign-market version of a toy produced with the same molds in a different factory. There is precedent for this – many Popy diecasts were produced for the European market and made in Singapore. Despite not being made in Japan, they are legitimate releases. One major clue is the box art. Both the Japanese and Italian version use the same basic art, with different text laid over it. The Italian box shows no sign of retouching where the Japanese was removed, meaning whoever produced it had access to the original art. You don't often see that with a bootleg.

That's not to say all of AL-ES releases are legitimate, but I think this one is.

Nice!, this little gokin is so beautiful to me. I like basic stuff as much or more than something with modern precision and high tech gimmicks. Basically like what I remember from my childhood. I doubt I'll ever be able to own a vintage Baldios, so thanks for reviewing it.

BTW, could Telecine be an italian word? In spanish, which is slightly similar to italian (slightly) Tele and Cine would be two words loosely translated as Teletheater, could also mean transfering film to video...not that this helps much in finding the company info, but yeah

...in Italian Cine is short for "Cinematografo" or "Cinema".

I remember Al-es from back in the day and this Baldios looks to me as a legit product. The package surely gives this away, Josh is right, the days of Photoshop were a long way ahead...

As for the copyright note, rights in Italy were such a mess back then, that I think Telecine could easily have been some kind of European or American company that bought rights to the show from Japan and then re-sold it to Italian TV, hence the AL-es people giving a wrong credit.

Famously, when Italian national TV (RAI) bought the rights to air Grendizer, the press package( guide book) for it came from France (the only country to have aired it complete, outside Japan), where the folders for each series were named "ATLAS". So, when the "ATALAS" about UFO ROBOT (as it was called in France) came about the RAI offices, they thought the series name was ATLAS UFO ROBOT, and they aired it as such!

Zmaz, you are right.
This was my first robot toy that I got when I was 4 years old, it happened when I was visiting relatives in Genova Italy. Imagine a 4 year old kid in a toy store that had piles and piles of chogokins. I was mesmerized and couldn't decide witch one I wanted so my mom and my godmother settled on Baldios :).
I can say it was a pretty good toy, it was heavy and it had a few gimmicks that I enjoyed. When I saw your review it brought so many memories back and I finally found out the robots name Baldios. When I was a kid I didn't care about the name of the robot I just cared that I had a cool looking diecast toy. At that time Mazinger Z, Grandizer, Voltes 5 were the ones I watched on Italian TV, they were my favorite but their toys were kind of expensive so I never got one.
Never you mind that because I got older and at age 30 I had me a Japanese girlfriend that I met in the US while studying Business English and ended up visiting her in Tokyo and making more Japanese friends that took me places. Those places were the second hand shops in Tokyo called nanimoya I think, where I finally bought Soul of Choigokin Mazinger Black and grey version. Heh, it took me 25 years to get my Mazinger but at least I'm older now and I don't have the urge to brake it only appreciate as a memento and symbol of my youth.
Thanx for making this nice review of Baldios, keep up the good work.