I'm sure this probably seems like the weirdest thing to "review", but I think most of us probably had these as kids so consider this more of a trip down memory lane than a review. I had a bunch of different Aladdin lunchboxes when I was little but I can't recall if I ever had this one or not. It's very familiar to me, but I don't remember bringing it to school. Perhaps one of my older brothers had one. But as an adult collector, it's one of the staple pieces of ephemera for the monster fan.

What makes it so great is the amazing artwork that depicts so many different monsters. A friend of mine owns two just to display both sides, something I should probably do eventually myself. It just looks great in a monster display. 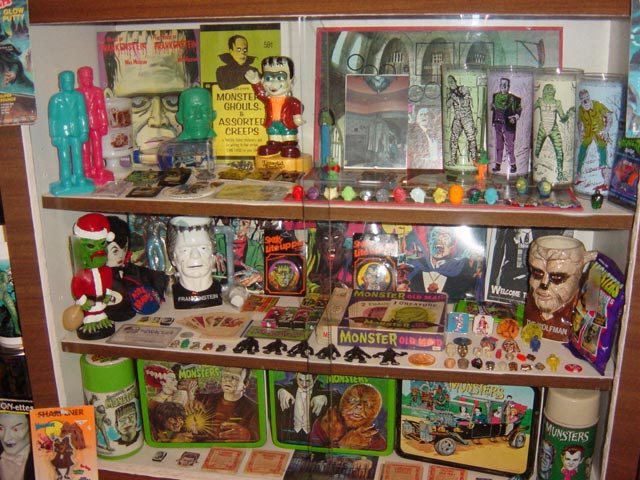 Even all the sides have great artwork and it's awesome to see lesser characters like the Metaluna Mutant and the Mole Man on it. It's been years since I've seen Tarantula (although I used to watch it all the time on 8mm film when I was little) and I don't remember the character shown in the last pic below.

Of course, the main monsters are also represented on the thermos, too.

"The best type of thermos that you can buy."

You may see this lunchbox called rare, but it's really not. The trick is getting one in good condition. I got mine for $85 at the New York Comic Con this past February. Probably could have done better on Ebay but I wanted to be sure I was happy with the condition. Mine's not perfect, but is in really good shape. When I bought it, we had all got a kick out of the fact that you could still catch a faint whiff of old milk in the thermos. Strangely, we all agreed that this was a plus and not a minus. Weird crowd, huh?

Bryan Witt, if you're out there, I've got your lunchbox!

You can't have it back.

Brings back fond memories. My older brother had this, and I remember exploring all of the sides, wondering who all of those crazy monsters were. Thanks for sharing.

This is what i shoulda had, instead I had to lug around a Bee Gees lunchbox... I didnt even know who they were at the time, Im just like.. Thanks mom, I guess this yellow lunchbox full of bearded men is pretty cool

Fear Not, there's a lot of gokin coming up soon!

I can see where younger readers may not feel this one. LOL. I was never a big fan of the movie monsters (unless Abbot and Costello were involved, heh), but that is an amazing lunchbox. Around that time I was toting either a Hanna Barbera, Monkees, or Partridge Family box myself. Ha! Man, I miss the days when you could not only get that much variety on one box but also artwork on all sides (plus the thermos!). Nowadays you get a solid color plastic shell with a design stamped on one side (MAYBE a duplicate on the other face). And often no artwork on the thermos.

I'm surprised these survived at all, much less in good condition. I remember being HARD on lunchboxes. A dozen or two easily came and went. :-)

Good con score Dave. Which area of the show did you find that? Thanks for sharing.

I'll chime in like every body else, and say I think I had the ScoobyDoo box, and definitely the school bus shaped one.

Now just to bring boxes, and gokin together, someone needs to review those old carry cases for the toys.

I can smell the dried milk just looking at this thing. Makes me want some PBnJ and some Hanna Bararra Spider-Man cartoons after school. I had the ol' standard SW box with the illustration of Luke, Ben, and the droids passing the troopers in mos eisley backed with a nice tie fighter/x-wing dogfight on the other.

Man I loved that box.

uuhh...this is a lunch box!

I must be seeing things! I visit CDX to check out updates and posts about chogokins, action figures including monsters, legos, etc etc etc... and while recently there has been a debate whether diecast cars are qualified to be in the CDX content or not, which for I say, yes they are!, all these including diecast cars have 1 sole thing in common. What is that? THEY ARE ALL TOYS! TOYS that we love! TOYS that had made a mark in our childhood! TOYS that made us happy and inspired! ..ETC ETC ETC again!

..and then we have here a lunch box.

Just curious, but what separates a lunchbox from a statue or toy with no articulation? Neither does anything but enhance the look of your display. Therefore, I really don't make much distinction between the two. Both are just collectibles to me.

This is the kind of thing you bring to a metaluna mixer.

Great review Dave! I think some people who frequent the site may be getting the wrong idea. The site is named CollectionDX. Not ChogokinDX or RobotDX or Sci-FiDX. The sites primary interest maybe these things but its still about the collecting mentality and what our writers each find cool! Thank you Dave for sharing your interests with us all in the collecting world. Please, continue broadening our horizons! Lets not pigeon hole ourselves into one genre of toy etc... We do not want to see CollectionDX become a toy snob site like some others that I will not mention. Everyone should feel accepted for what they like and no one should be persecuted because the item may not be exactly "on topic".

Awesome review Dave! Its funny I must have had a dozen or so lunch boxes as a kid and all I remember are two: The red Peanuts/Snoopy one and an Adam 12 one. What in the heck was I doing with an Adam 12 Lunch box in the 80's!!??

The litho artwork on these items are amazing especially your lunch box here. I've always been fascinated with the artwork on the GI Joe box as they artist made them look so realistic, The Snake Eyes painting on that box is one of the best painted Snake Eyes ever.

I just don't understand the paranoia people are having with items like this on CDX. Right now we have 2 transformers, 1x vintage Macross model kit, 2x collector monster dolls, 1x 8t's action figure, 1x bootleg soft vinyl, 1x soul of chogokin, 1x cospa item etc. I didn't even notice there was a video game review as I'm not into games and I just ignored it. CDX is NOT falling apart or losing focus. The fact is that most of the writers here on CDX are in our 30's and its great to finally talk about some odd things we have in our collections since we were kids, most of the time its robots, soft vinyl, etc but sometime it might be a lunchbox, or a Star Wars fan club set, or an anime 45rpm record. Its great to finally reevaluate many items we took for granted when we were kids. Instead of complaining just read the review and learn something new. That's the best thing about this site, you never know what the next review is going to be around the corner and that's what keeps CDX cutting edge.

I had a 6 million dollar man lunch box when I was 6. I wish I still had that damn thing..Great review Dave, that's funny that is still smells like old milk, that was one of the questions I had but you answered it!
Chachipower, you made me choke on my water when I read your comment about Bee Gees lunchbox!
This site is priceless..
Keep up the good work guys!

I remember when a kid brought a lunch box to Jr high (6th grade), boy that was a sad scene!

Thanks everyone for your comments! I knew this was a bit unusual, which is why I opened the article with that disclaimer. I decided to upload it for a few reasons. First, Josh said he wanted some stuff for Halloween. Two, our "ephemera" category (which was created by Josh and has existed for a long time) is sadly underused. Three, this is a pretty well known item but I don't know of many sites that show ALL the artwork on it. So I wanted to show it all and I knew it would be mostly a visual "review" and wouldn't take long to look at, if you even chose to do so. Four, when I decided to post it last night, it was only because there hadn't been anything posted that day yet. (I didn't realize Josh was working on his Daiyaking review.) You may or may not notice, but most of the time when I post a review of one of my crappy toys or whatever, it's usually because the site didn't have anything posted for that day. If there is a Transformer, Chogokin, or whatever already uploaded, I will always hold off and wait for some down time. We don't like the site to be stagnant, but it's just not feasible for there to be a new, expensive robot review every single day. I understand fully that my tastes are different than most here and don't try to compete with that other stuff. Lastly, and this applies to the car stuff too I think, the more variety we have, the greater exposure it brings to the site, which can only help us in the long run. Try Googling "Aladdin Industries Universal's Movie Monsters" and see who comes up first. ;)

CollectionDX never fails to amaze me!
I find this review about Univeral's Movie Monsters lunchbox very interesting and yes it does form part of a collection which brings back very fond memories. There is absolutely nothing out of place here! After all this site is called CollectionDX. Thanks for sharing and please keep up the good work. This is what makes CollectionDX unique. Do not limit yourselves to just chogokin and toys. After all the subjects we deal with are the anime/movie merchandise/gadgets and not just toys!