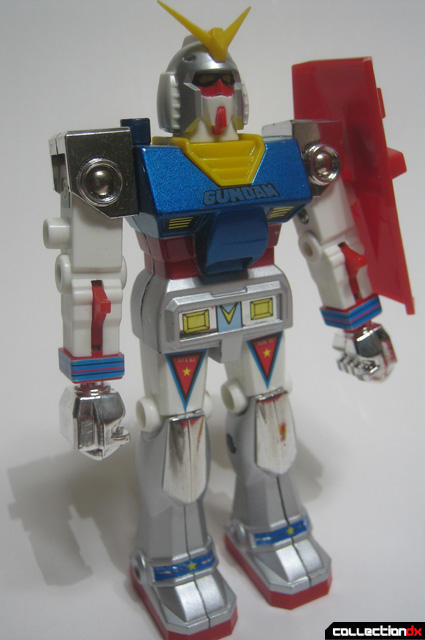 When Mobile Suit Gundam was released back in 1979, who would have thought it would be the worldwide phenomenon that it is today. But Gundam had a couple of missteps at the beginning that if it was not rectified it could have easily been another little known anime from the late 1970s. For example, the first airing of Mobile Suit Gundam was not popular with the public and it wasn’t popular until the second airing of the show that coincided with the release Bandai’s iconic model kit line. 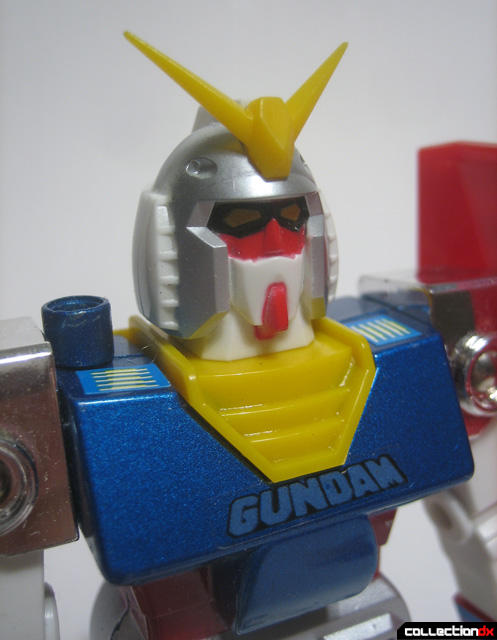 The other Gundam misstep from the early days was the toy series that was released by Clover. First off I do not blame Clover for their failure of the Mobile Suit Gundam toy series. Honestly, they have made some great toys over the years and an example of Clover toy is a must to have in the collection. Unfortunately, Clover based all their Gundam toys off of rough prototype drawings that only closely resembled the final designs that were eventually released and produced for the Mobile Suit Gundam show. 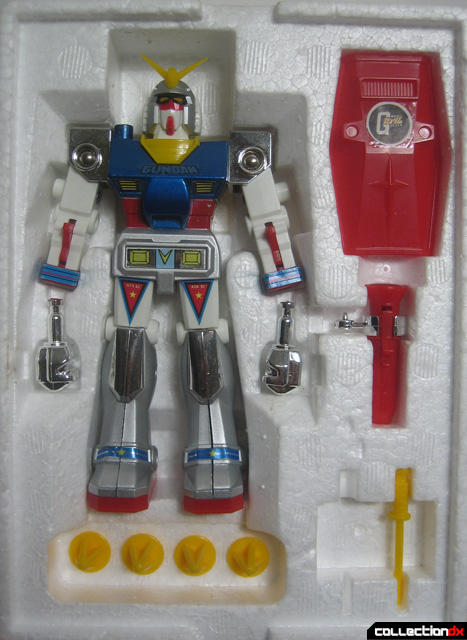 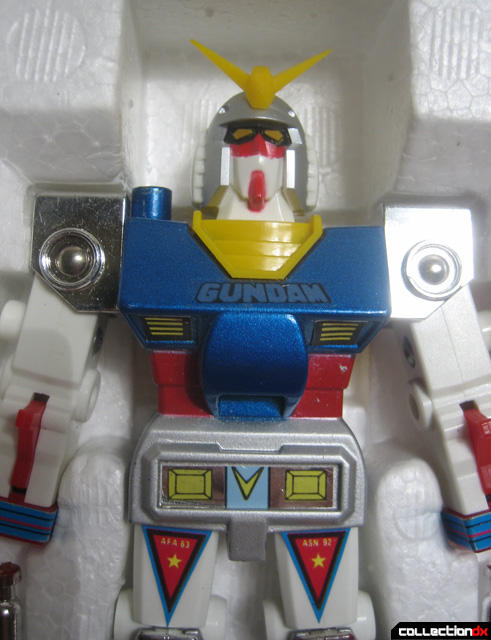 Also, MS Gundam was most popular with young adults in their late teens and twenties, due to the complex political nature of the show and the Clover Gundam toys were clearly aimed at small children. I am sure the term “ Real Robot” really did not connect with the designers of the toys, with Go Nagai Chogokin style art design the “It” look of 70’s robots. What came out of the Clover factory in 1978 was a long-faced, ill-proportioned Chogokin style Gundam that bore no resemblance to the sleek Mobile Suit armor that made up the Gundam of what we know today. 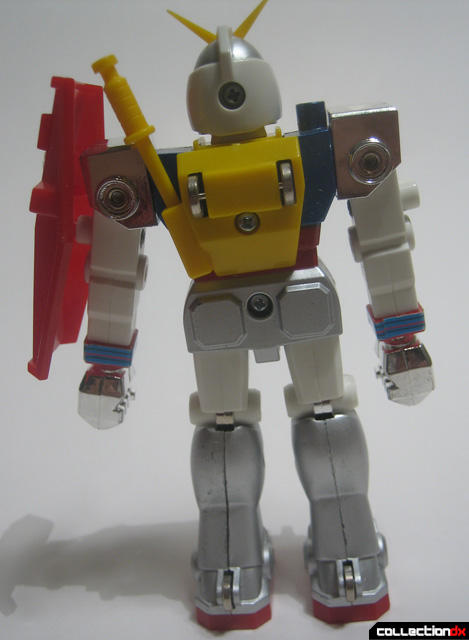 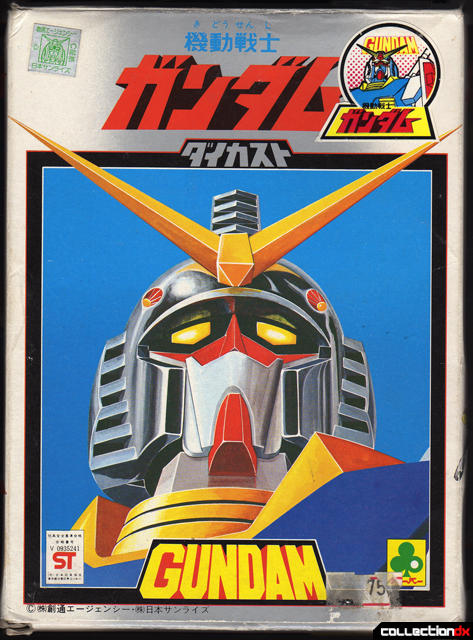 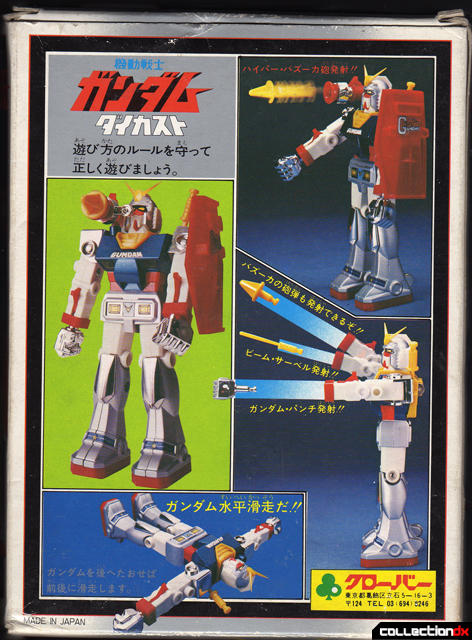 Gundam is a nice chunk of weighty metal and is solid throughout but plastic is used for the head, arms and upper legs. The knees slightly bend at the joints and the head and arms rotate. Gundam comes with some nice accessories and looks great with all the parts attached to the figure. I always question the shoulder-mounted cannon on many of these early Gundam toys because as far as I remember Gundam never had a shoulder-mounted cannon in the anime, only a hand-held cannon. Regardless it is a cool little item. Only one place is provided for the beam saber on the backpack. 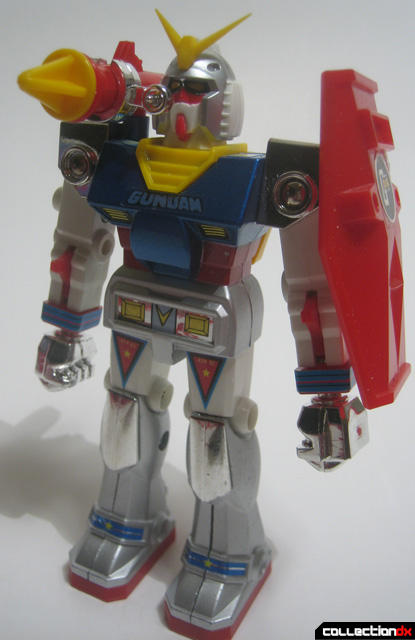 One of the more fun aspects of this set is how you can rearrange all the shooting parts on the figure. The chrome fists, beam saber and missiles can shoot from the arms and cannon. The beam saber cannot be held in the fist but is designed to shoot from the arm or cannon. A set of wheels are also attached to the back so one can roll around the Gundam for extra play value, perhaps to mimic the first episode of Mobile Suit Gundam. 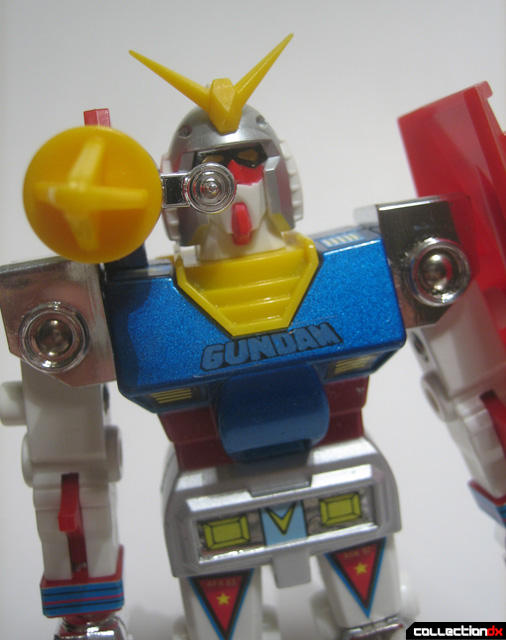 Changing tastes as they are, what is most charming about these early Gundam toys is that fact that they do have many Chogokin overtones and gimmicks. I love the color scheme, sticker and chrome details throughout. A Japanese robot is not a Japanese robot unless it has its name printed across its front in huge letters and this Gundam is a prime example.
The silver, chrome and white plastic details are very reminiscent of the 1970’s era for toys. I like the stickers that represent the waist and upper legs and the star sicker across the toes. Although the art design is quite dated, especially for a real robot era figure, it is one of my favorite pieces in my collection. Overall you can help but smile at all the oddness but somehow it all comes together in its own funky way. 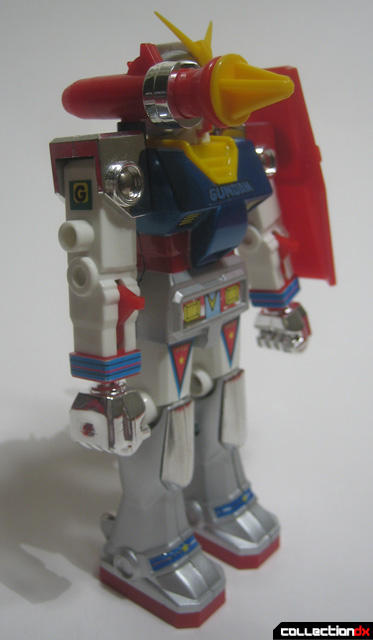 I bought this Gundam back in the 1980s at one of the Buena Park Model kit conventions for $10.00 but today these regularly sell on eBay for $100.00. It is a definite pickup for the Japanese toy collector for what it represents: The not so subtle transition from the Chogokin era to the Real Robot era.

©2008 Article and pictures by Leonardo Flores and CollectionDX

I know I'm usually the first one to say I respect the history of something I show an interest/specialty in but.. Wow...

This thing's absolutely amazing. Thanks for sharing, Leo! Apparently, this is version 2 of the Clover ST. Check out TBDX's coverage of Clover for all of their Gundam (and other) offerings.

One day, I'd like to pick up the Combination Junior...or, hopefully, the Gattai set.

These toys totally harken back to the old days of super robot toy designs (namely, the 70's!). They have a charm all their own.

Later toys and models obviously appeal to those interested in the "ultra-realistic" look. And that's fine. But I'm not really feeling the whole "Katoki-ization" of Gundam designs in the early Master Grade kits (and obviously with the FIX line). All I know is that the latest ("2.0") kits that actually look like the mecha in the cartoons seem a lot cooler to me.

Much agreed! I would love to have that Gattai set, it would go great next my Godaikin series, looks like the perfect size as well. I wonder how much they sell for these days! I will upload the box scans shortly as I wrote this review where I didn't have access to a scanner.

I do love the charm of these older designs, and the closer they look to the anime the better. Every artists is going to have their take on the theme ( take Batman for example) but the original RX-78 will always be my favorite.

I wish, never seen that before, I'll keep my eyes open!

Sanjeev is right, the GA-100 is a beautiful toy. I have one and it is one of my favorite toys in my collection. It fits right in with all my other vintage toys and I even like it more than the RX-78 and GM from the GD Chogokin series.

Misguided or not, these are wonderful toys.