All I learned about Blue Noah I learned from this fantastic article on the Starblazers website.

Essentially, Blue Noah is a copycat of Yamato, trying to cash in on the success of its predecessor. But calling it a copy isn't really fair, as much of the same staff and even the same voice actors worked on Blue Noah. Perhaps it was more of a successor. Either way, the show was obscure, and so were the toys.

If you have a penchant for naval vessels that fly through space with a big gun in the bow (as I do) you will probably be drawn to the designs of Blue Noah.

Few toys were made from Blue Noah, and most were made by the same company that made the first Yamato toys - Nomura.

This is the standard size Blue Noah. It's about 5 inches long and made out of diecast and plastic. 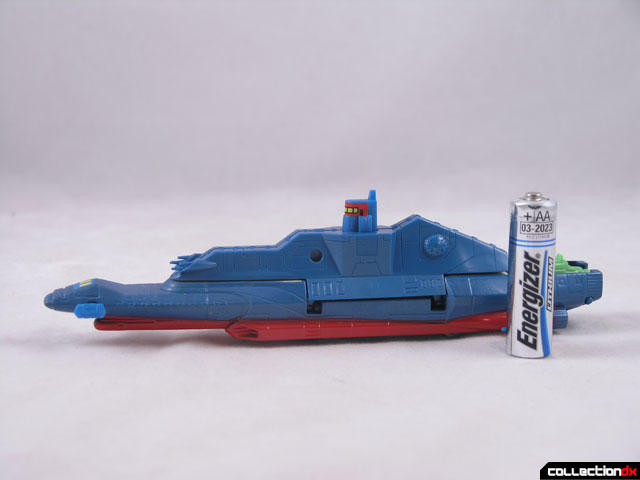 The box is stunning. I bought this for the box. I was in an old toy store in Tokyo and I made the old guy running the shop dig this out for me. I paid too much for it, but damn, the thing is beautiful. 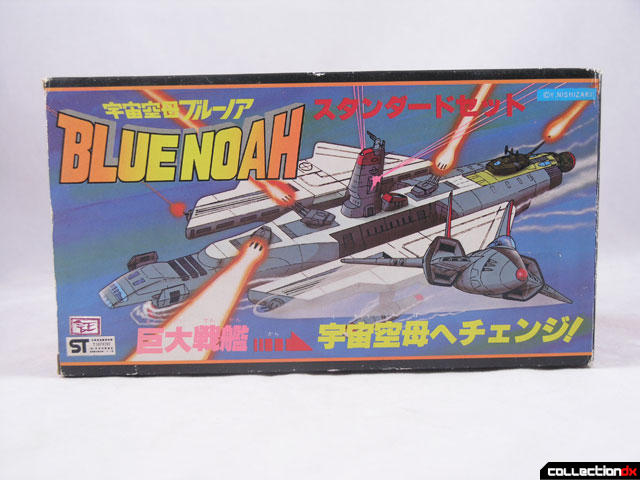 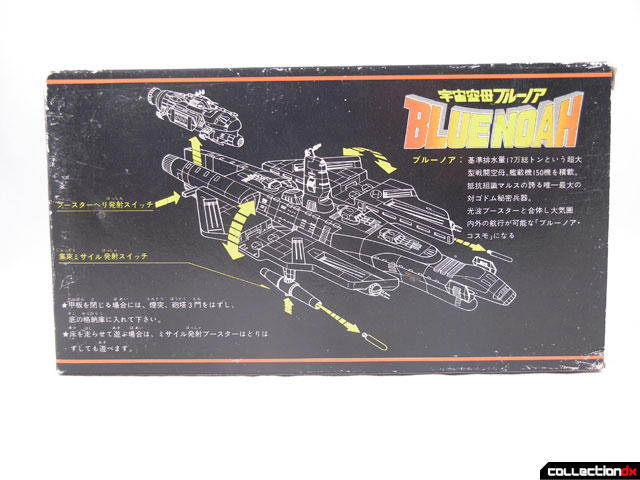 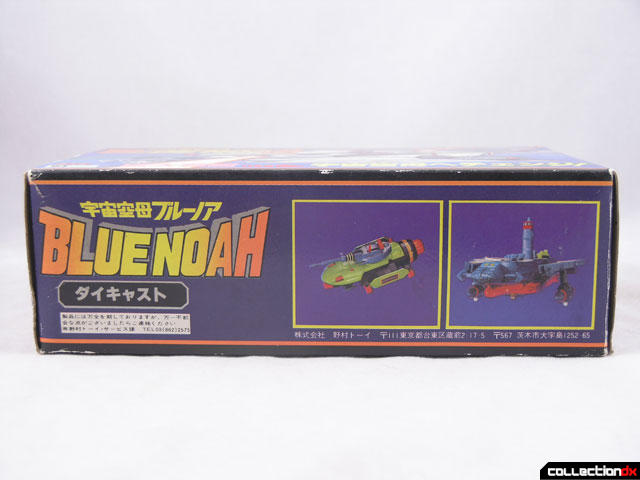 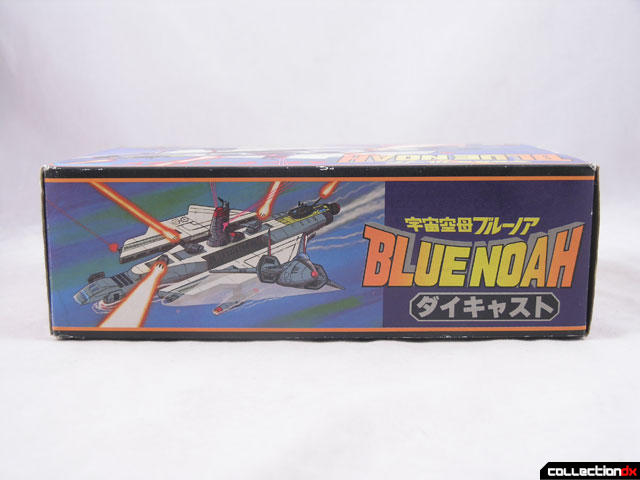 Inside is a nice styro tray a catalog, and the toy. The toy is surprisingly light.

The only diecast is in the lower level of the ship. The rest is plastic. 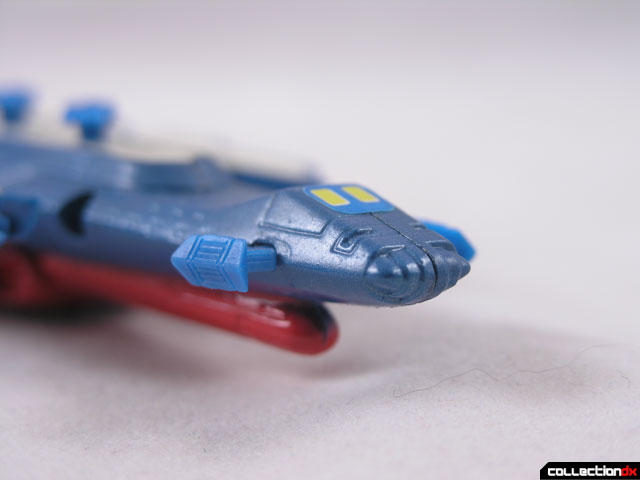 The toy holds tons of play value, but some odd decisions. The most notable gimmick is the folding hull. 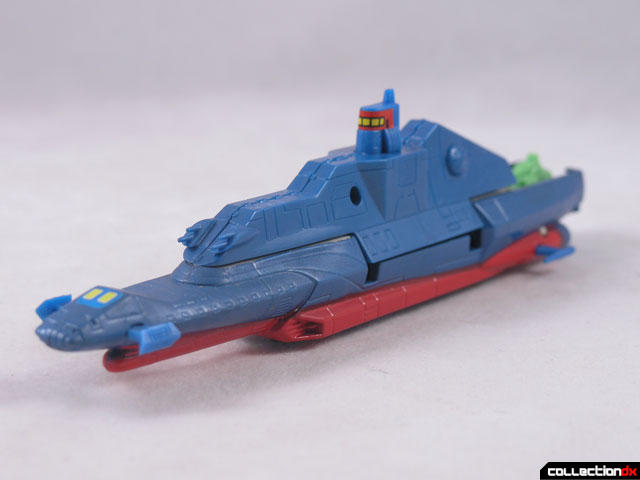 When Blue Noah is underwater, both sides of the hull are sealed up tight. But on the surface or in space, the sides split down to reveal a bunch of cannons and such. 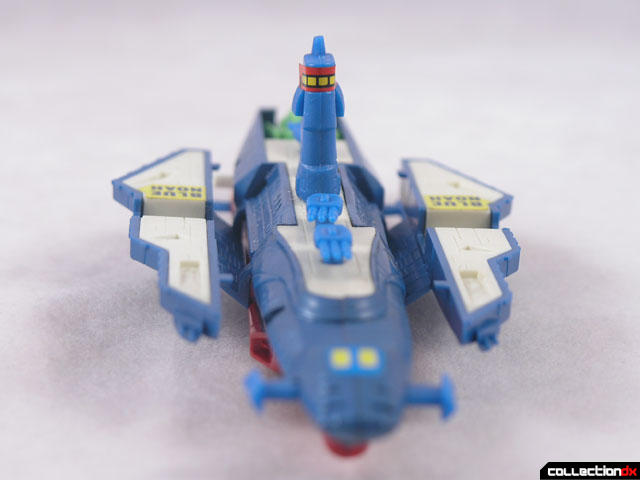 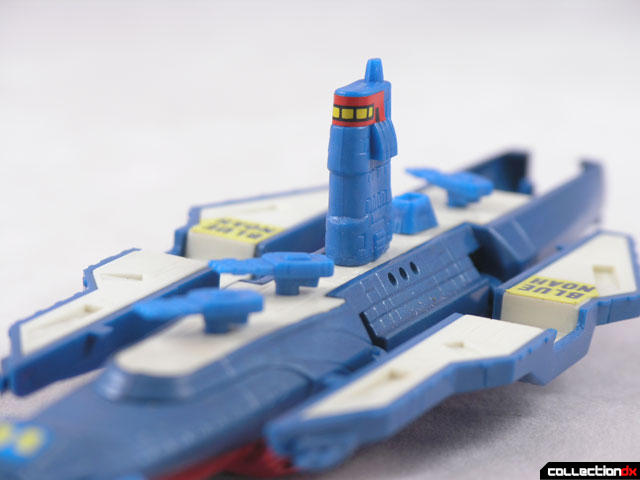 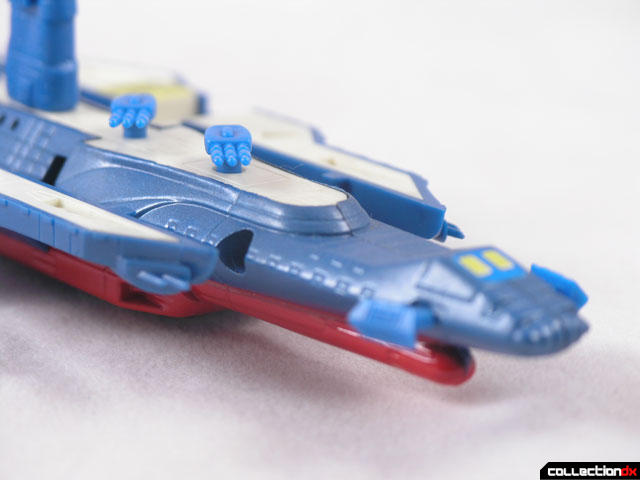 This is all well and good, but there are a few problems with the execution. For one - you can't close the sides with the gun turrets on. You have to remove them. 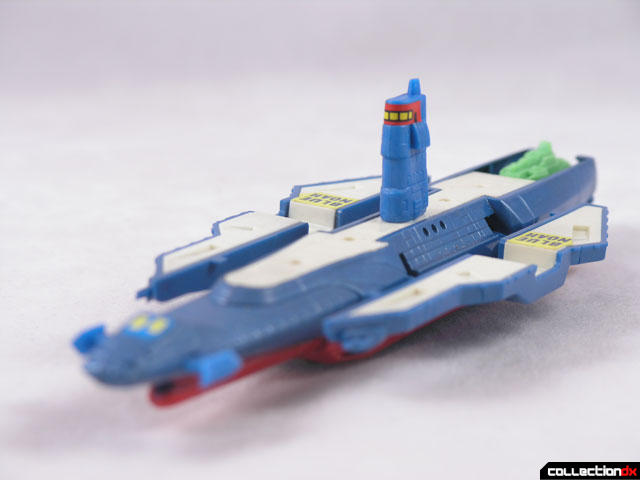 The second thing is the missile launchers that plug into the side. They fit fine with the sides closed, but when they are down they are too big and push the sides of the sub up. It looks odd. Hey, they all can't be engineering marvels. 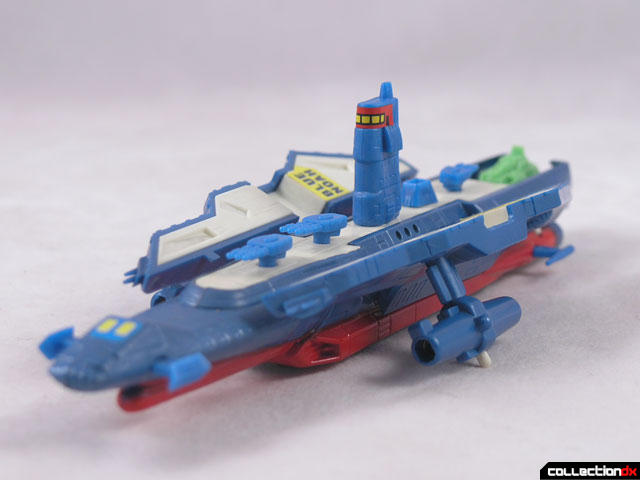 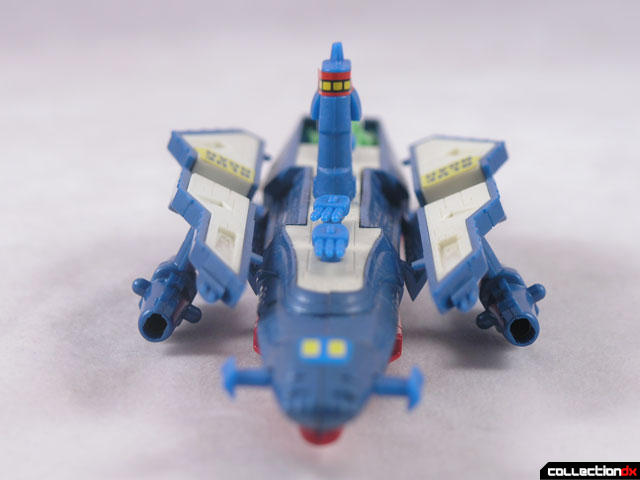 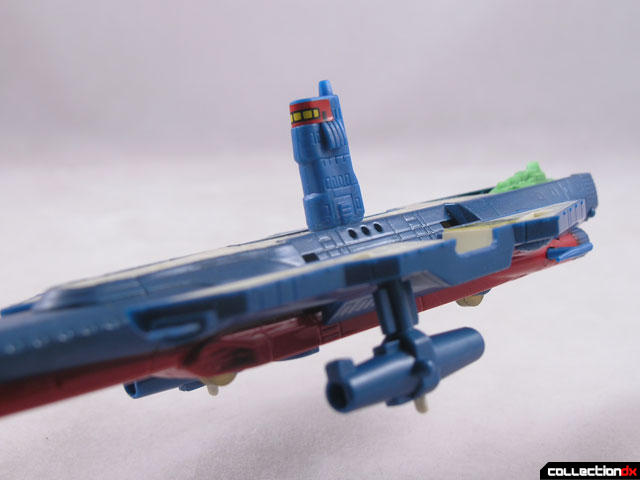 The bottom of the sub features a trap door in which you can store missiles or whatnot. There are metal wheels on the bottom to roll the toy around. 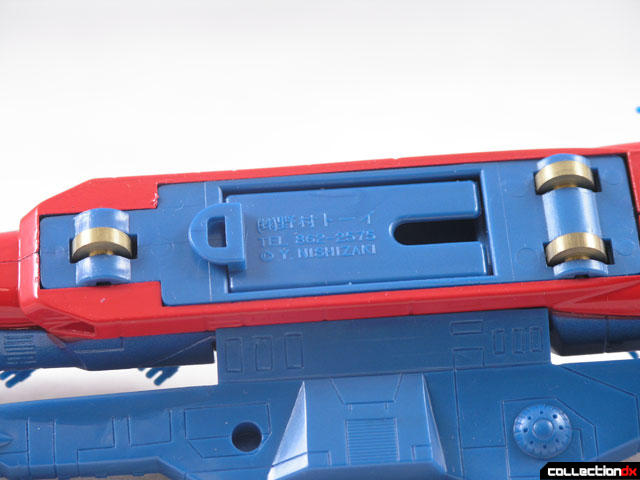 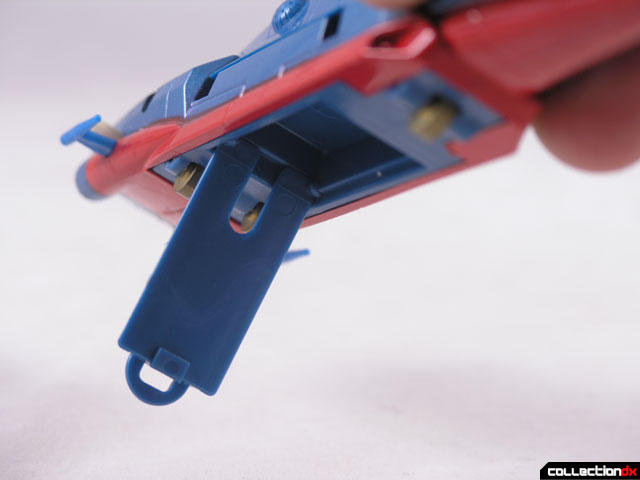 The back features a spring loaded launcher for the small sub called the Bison. (which also has its own larger size Nomura toy.) 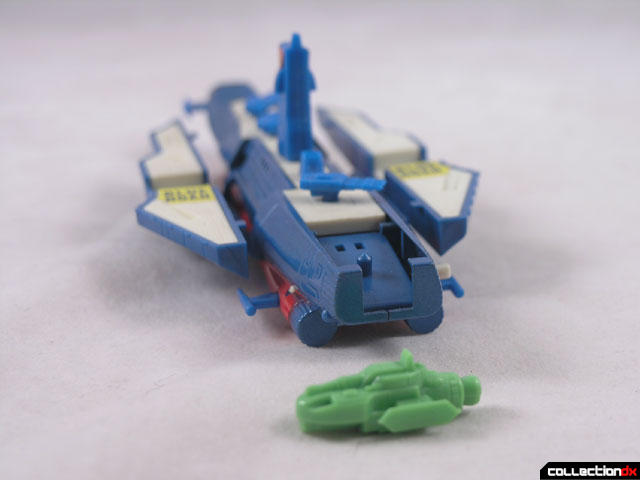 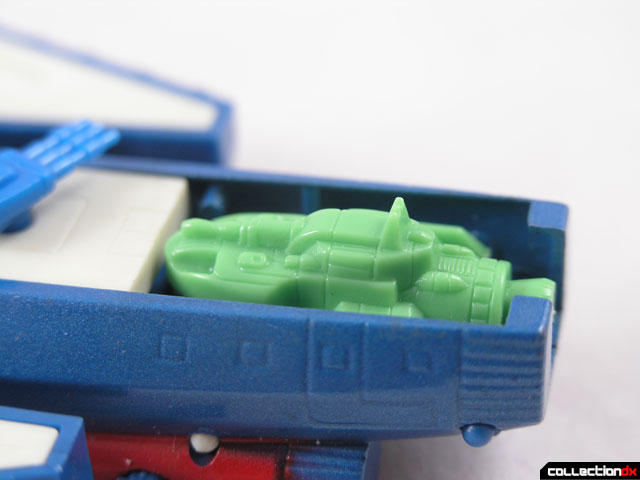 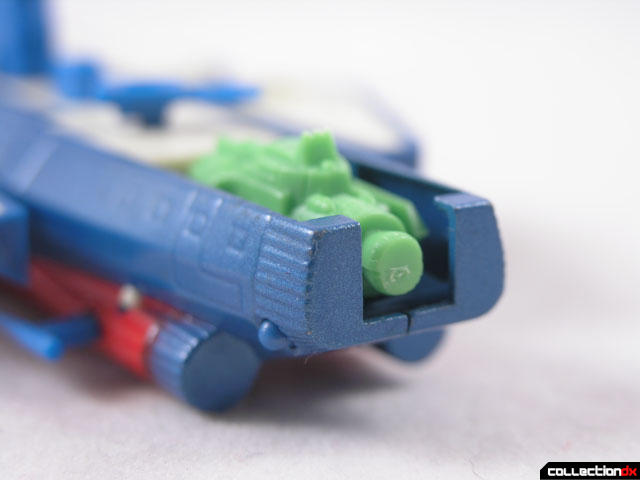 There are a few stickers for detail, but the sticker on the bridge has begun to lose its adhesive, so it comes off easily. 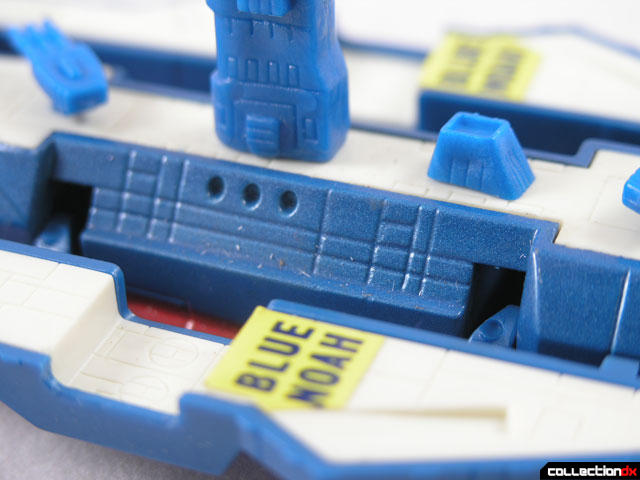 It's a fun little toy, with a neat look to it, and a GREAT box.

Note: Blue Noah was dubbed into English as "Thundersub" but I never saw it. Have you?

9 comments posted
Too much?

How much did you pay for it, Josh? Just kinda curious.

Yeah, I remember Thundersub. It aired for almost a year every weekend on TV during the mid/late 80's/early 90's but the storyline was so boring.

I'm a big fan of all things StarBlazer/Yamato, and I've never heard of Blue Noah. Damn you, Mr. B, for introducing me to this wonderful little toy.

I love these "few people only that knew" toys... great finding, Josh...

Thanks Josh, this one even stumped me!!! I love the Theme Song and music, now I have to find the 45rpm!!!!

So glad to see this today!

Blue Noah stuff in the US is really impossible to find. It doesn't come along often. It's a super deep cut for Yamato fans, and THUNDERSUB again is pretty obscure stuff.

If you liked the BLUE NOAH show, try Leiji Matsumoto's version of the show (kinda) called SUPER SUBMARINE 99 - the one DVD I saw of it was pretty good.

I would personally LOVE to see more Ulysses 31 and Blue Noah toys reviewed on the site. There's not a lot of info on these out there. Nomura and Popy put out a bunch of cool stuff for these two shows. Plus U31 is pretty popular still in Europe!

On the contrary Josh, BLUE NOAH is an engineering masterpiece as the missile launchers are semi-submerged in water when in the down position!

WANTED DESPERATELY: A Soul of Chogokin BLUE NOAH by BANDAI or at least a plastic version by TAITO!