One of the first die-cast Shogun toys I got was the Shogun Action Vehicles Varitank. I bought it not because it's particularly great, but instead because it was particularly cheap. I think I paid something like $25 shipped for it. The Action Vehicles seem to be less popular than the robots and this one in particular isn't that great. Combine that with the fact that it doesn't seem very hard to find and you end up with a cheap score 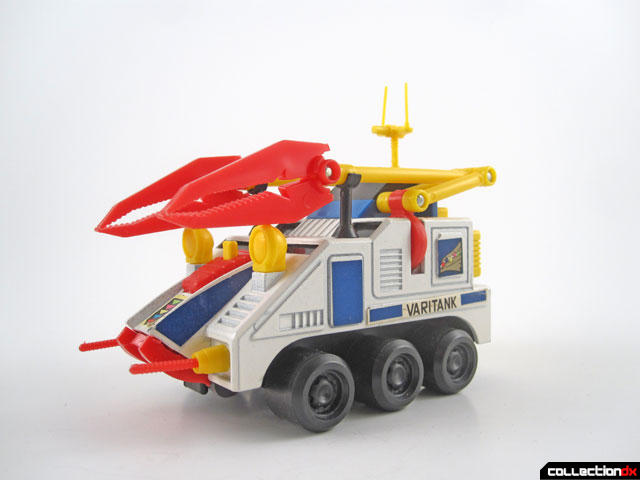 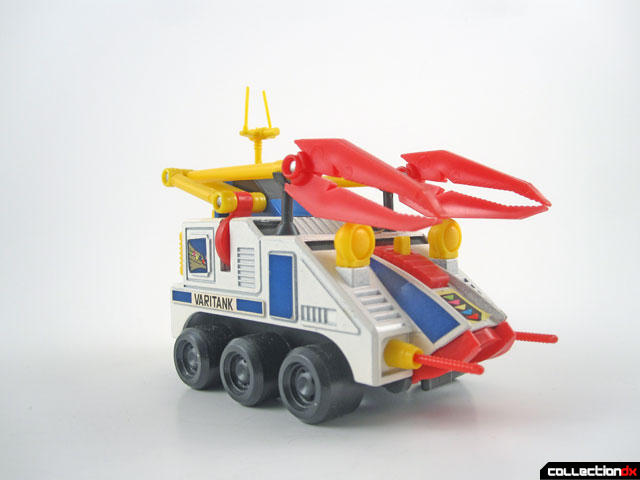 This toy is the Japanese Popy PA-64 imported and re-branded for domestic sale. The vehicle originates from the very first Super Sentai show, Go Ranger. I haven't seen the source material so I'll have to limit my thoughts strictly to the toy itself.

It is approximately 4" long with the main, white body being made entirely of metal with plastic add-ons... added on. These parts include the main yellow antenna on the back, the headlights, arms, arm rests, missile launching mechanism and rear detail. The antenna is actually a separate piece that the user must install. 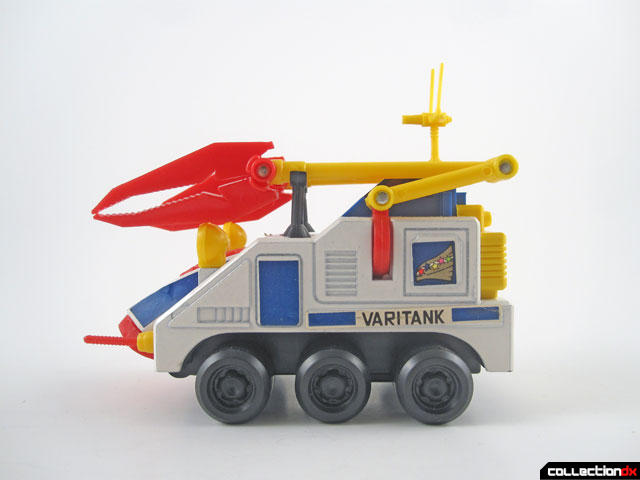 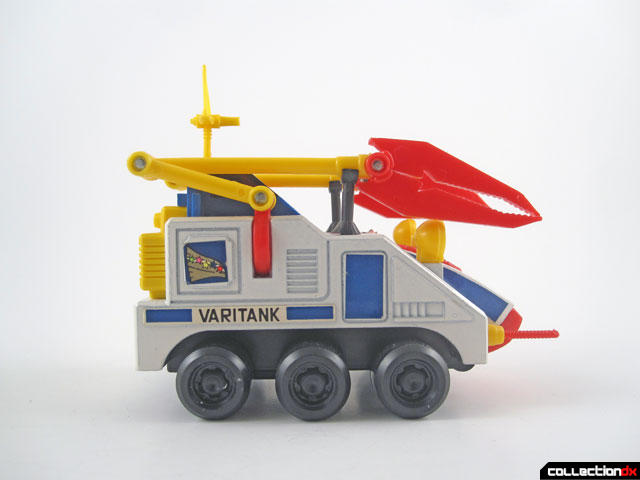 Although a small toy, it does have a couple neat play features. In keeping with Shogun Warriors tradition, of course there are shooting missiles. But this feature is not as cool as you would think due to some poor design. Notice the red plastic panel on the front of the vehicle. 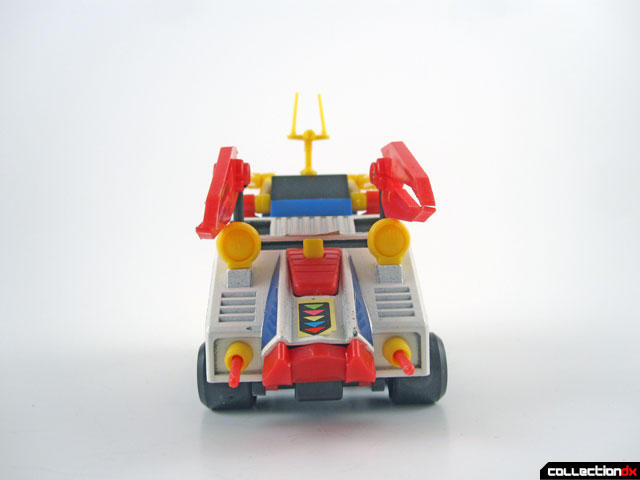 You need to pull this down to access and load the missile launchers. 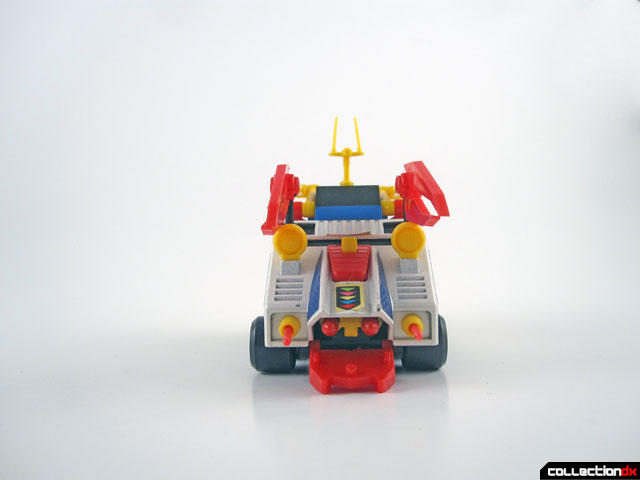 This wouldn't be much of a problem except that you cannot have the missiles pre-loaded inside the vehicle. They are too large to allow the door to close with them in there. So you have to open the hatch, load the missiles and then fire them. It would be a much cooler play feature if you could just drop the hatch and fire away!

Well, the second play feature makes up for this somewhat. The big red pincers at the end of the yellow plastic arms can be opened and closed to simulate a gripping action. Meanwhile, the arms themselves can extend both forward and backward on a hinge. And while I almost didn't notice it at first, they can also swivel down to the sides of the vehicle, giving you a much greater range of motion. Honestly, I feel this even gives the vehicle an almost life-like look to it. With the arms out to the side, it reminds me of a crab or something. 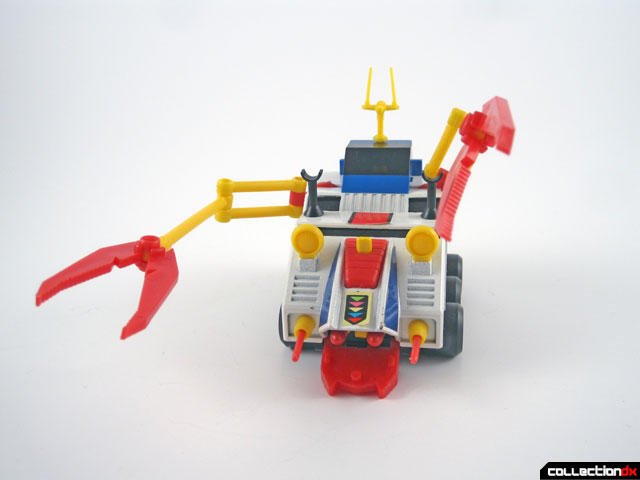 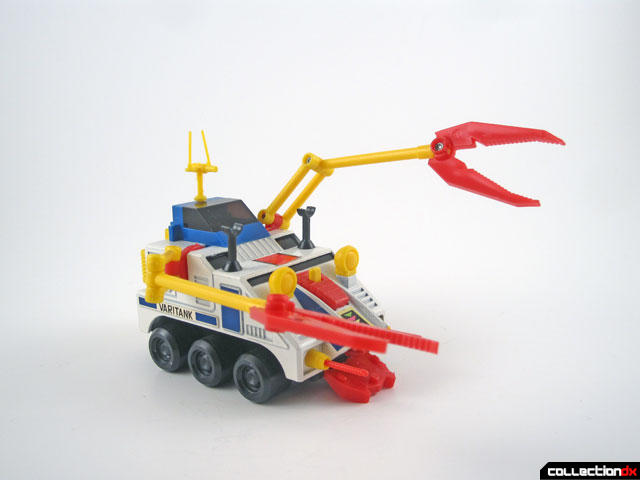 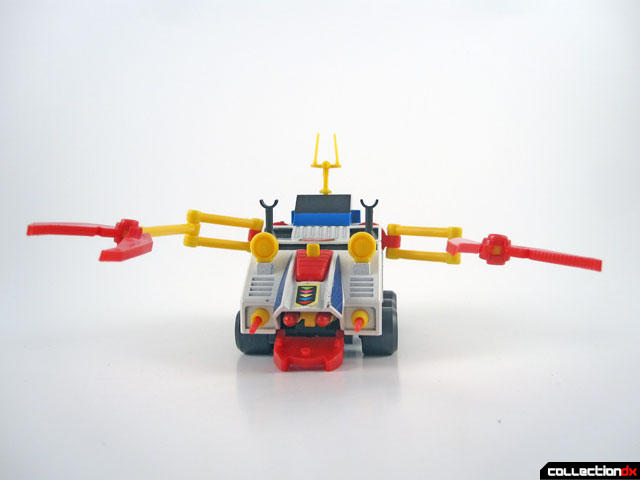 Of course, knowing me, if this toy didn't come packaged in a Shogun box, I would have absolutely no interest in it at all! So I have to take a moment to show off that box now. Of course, with a smaller toy, we get a smaller box. It measures about 4.5" x 4.5" x2.5". 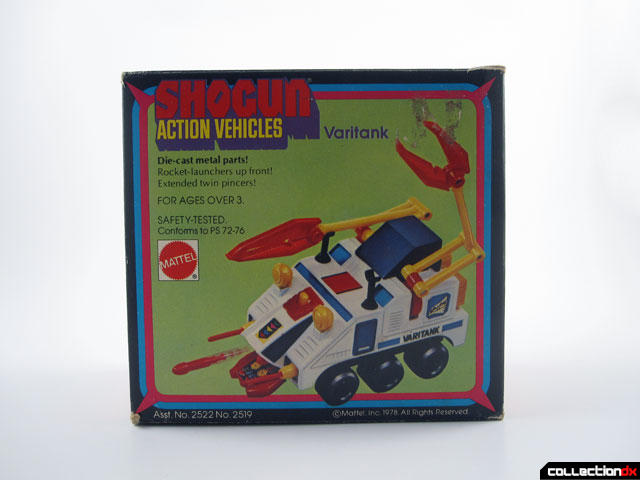 With a smaller box comes fewer vehicles advertised on the back. 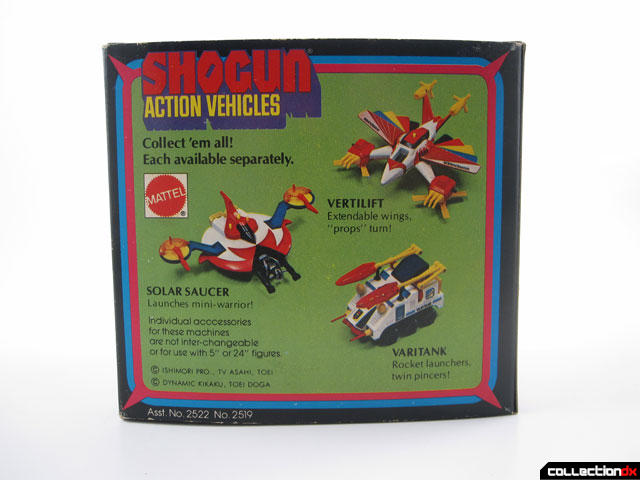 Both sides of the box are identical images depicting the gimmicks. 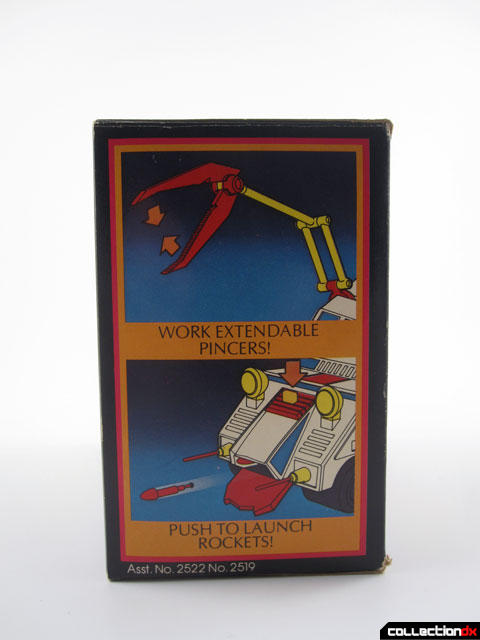 There's also the same design on the top and box flaps. 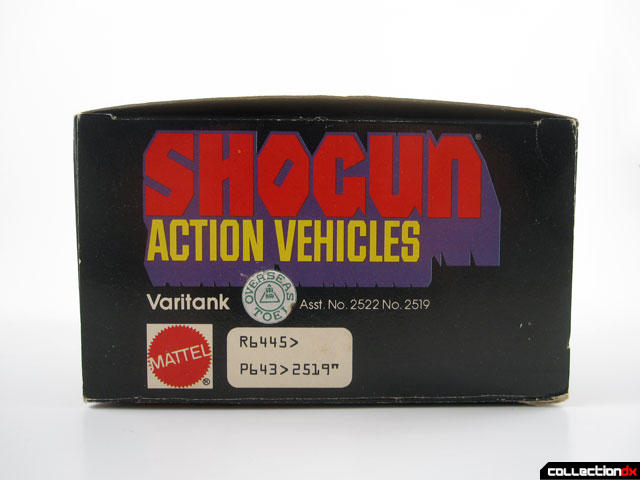 This may just be my own bias speaking now, but I don't see a whole lot of reason to own this toy unless you are a completist of some type, be it Shogun merchandise like me or just sentai or chogokin in general.

....now bring on what Josh B had long promised.... that overdue SKY ARROW review!

In school (back in the day) I overheard someone use the phrase "Death Machine". No idea to this day what they were talking about, but later that day I ran across this little nightmare at Two Guys and voila- I was instantly terrified of it! I imagined those red pincers doing all sorts of horrible things to people- I couldn't even look at it's pic in those great Shogun Warrior ads you'd find in comics. For me it was the "Death Machine", a nightmare come to life in DX metal!

Take a good look at it in this context... what 70s DX vehicle ever fit the phrase "Death Machine" better than this monstrosity?

Now that I'm a grup and have overcome such childish fears, I love the Varitank. Don't care how common it is, it's a great design and one of my favorite Shogun vehicles.