Timanic is a footnote in the history of late 1970's Takara.  Towards the tail end of the original Microman line but before New Microman in 1981, Takara was searching for their next big thing.  Timanic was an attempt to recapture the popularity of Microman with larger, more deluxe figures and vehicles and some novel gimmicks.  The line sadly did not succeed, and only consists of a handful of figure and vehicle releases that are pretty tough to find now. 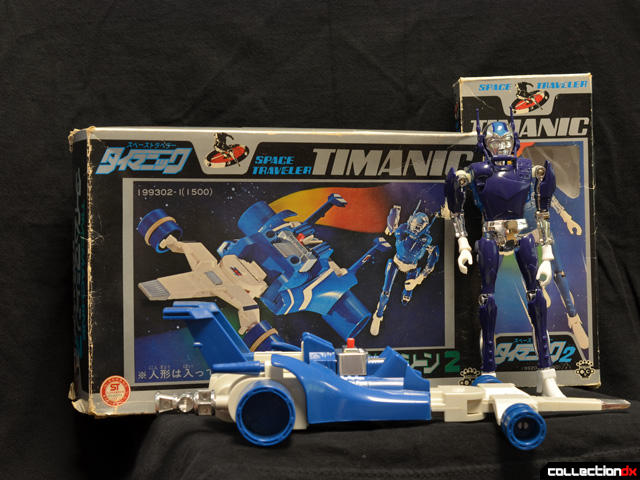 As sad as that story is, the toys are actually quite cool.  I'd only ever seen a few pictures of the Timanic figures before and not really paid much attention to them, but when I spotted this pair at the 2012 East Coast Chogokin Summit, I knew there was no way I was leaving without them.  The toys I picked up were Space Traveler Timanic 2 and Time Machine 2, released in 1978. 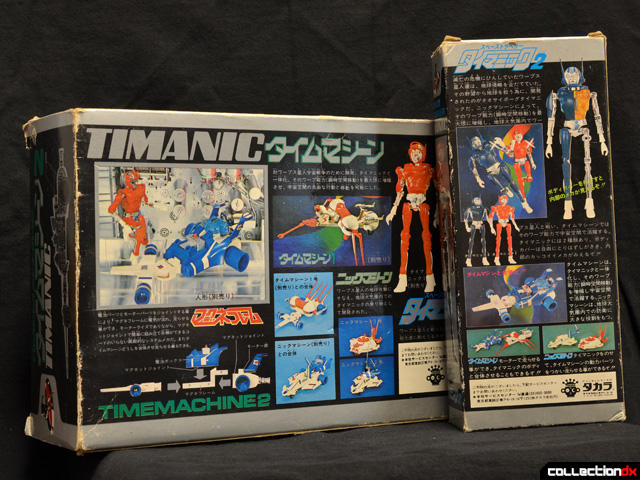 The boxes are classic 70's Takara with bold graphics and a lot of writing. 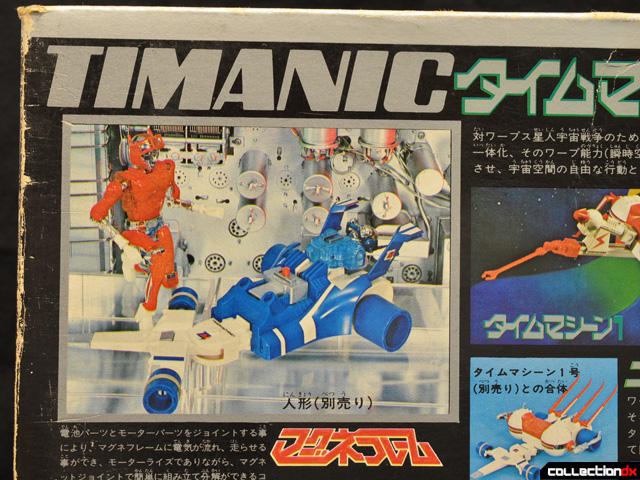 I especially love this scene of Timanic 1 hanging out in some kind of space station with all that chrome and those dials.  Fantastic pre-80's sci-fi. 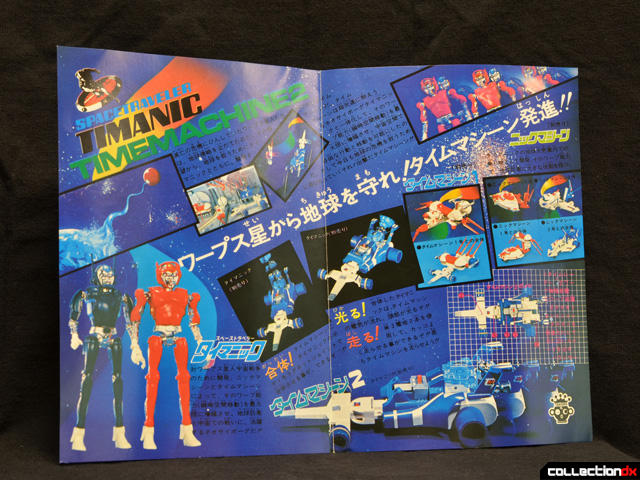 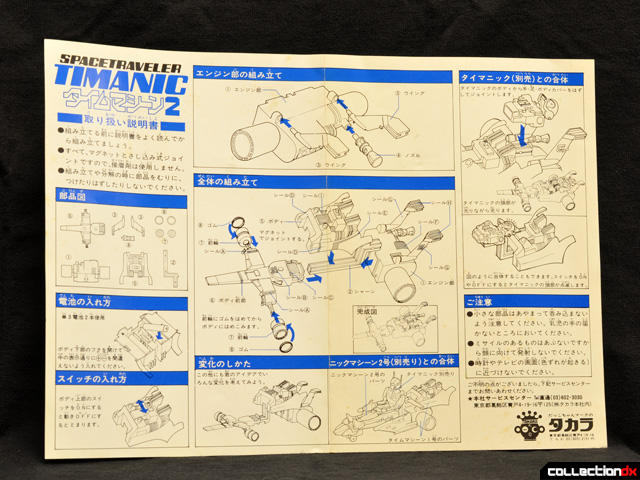 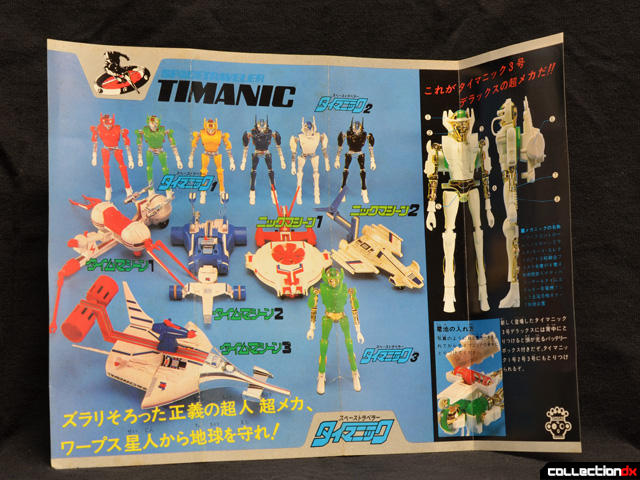 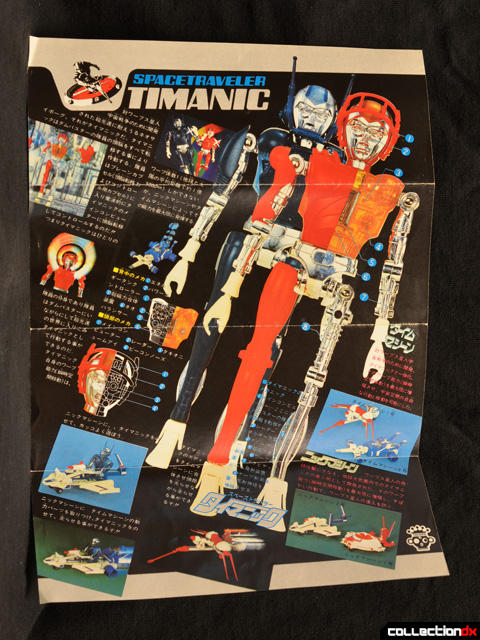 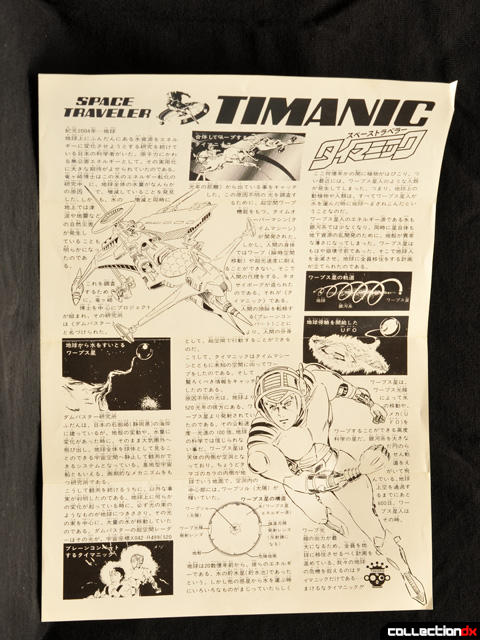 Timanic had no TV show or comic, so the only source of story was on the foldout instructions and posters included with the toys.  These also feature lovely graphics, and I'd love to have them translated if someone were up to it. 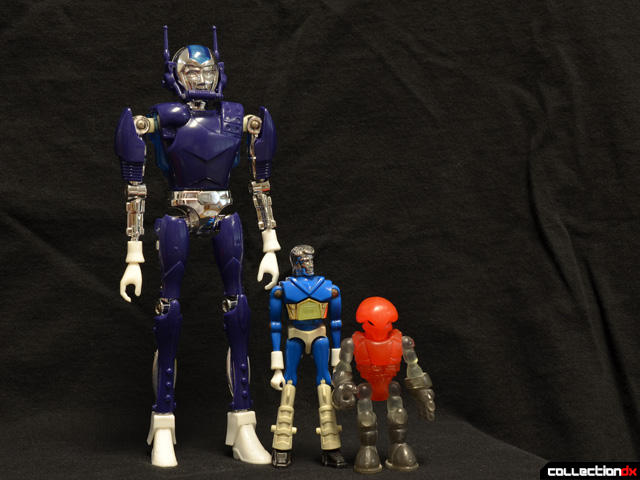 Blue Timanic stands around seven inches tall and is made entirely from hard and soft plastic, shown here with a Microman and a Glyos figure for something of an extended family photo. 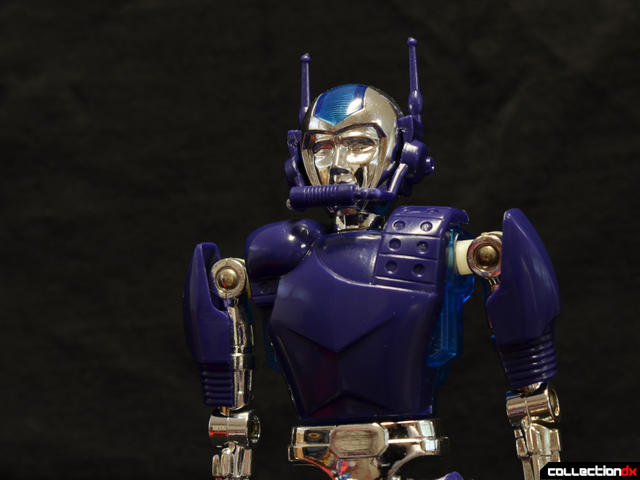 The sculpt is sharp and classy, with just the right amount of detail.  There's something really special about the mix of techy and sleek details that set Timanic apart from other sci-fi lines.  The chrome face is also gorgeous, with a stern and dedicated expression.  Worth noting here is that the blue armor parts are made from a slightly soft plastic and are quite fragile.  I had to make a couple minor repairs to this guy after receiving him, which I will mention throughout the review.  Visible here is the repaired mouthpiece, which is very delicate. 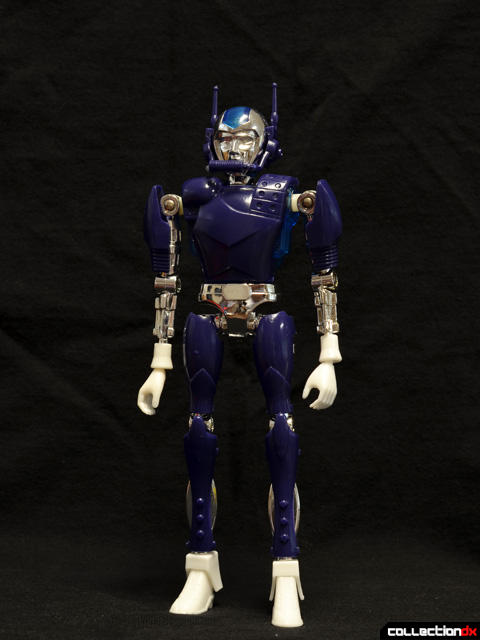 I also had to repair the peg on the right thigh armor, which explains the slight blemish visible in some of the photos. 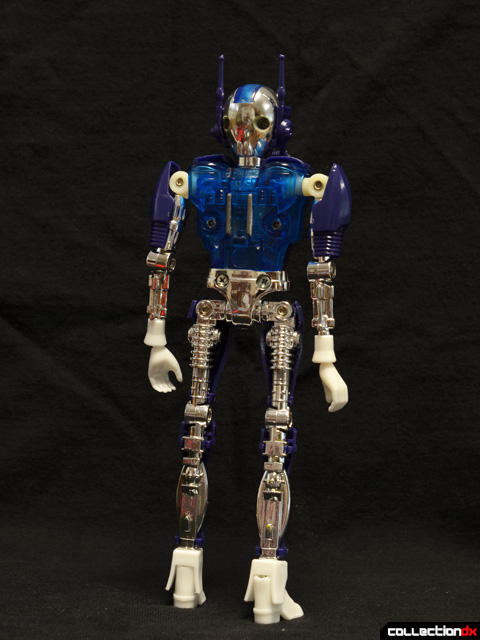 Looking from the back reveals a few interesting things about Timanic 2.  First off, the chrome skeleton is loaded with detail.  The white soft plastic hands and feet reveal Timanic's relation to the Microman line.  Also pay close attention to those two metal rails on the back, which will play a role later. 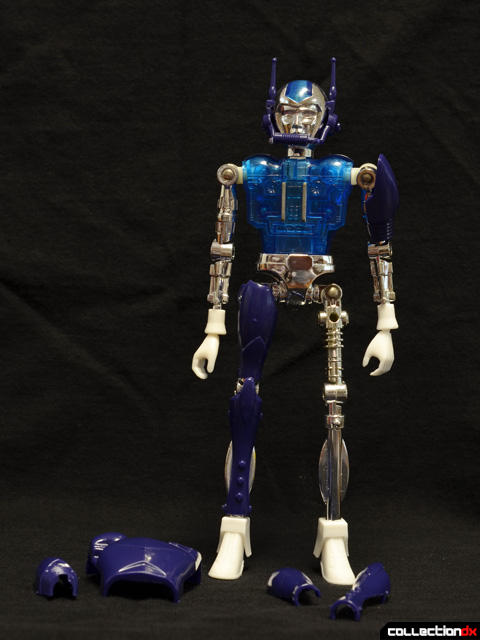 The armor is removable, but it is a harrowing affair.  The blue plastic is a little springy, but not particularly durable.  I will probably never take the armor off of this guy again. 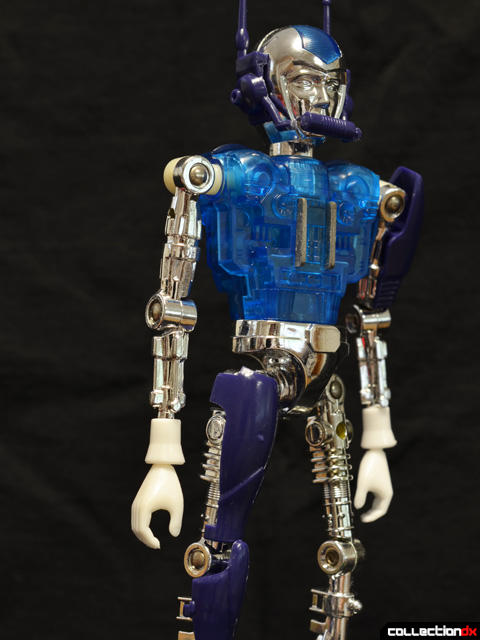 I am glad I stripped Timanic 2 down at least once, however, because the chrome skeleton and clear blue mechanical torso are worth seeing.  The Henshin Cyborg influences are clear here, reminding me of Machine Android A.  Timanic has a Terminator feel, but predates the first film by six years. 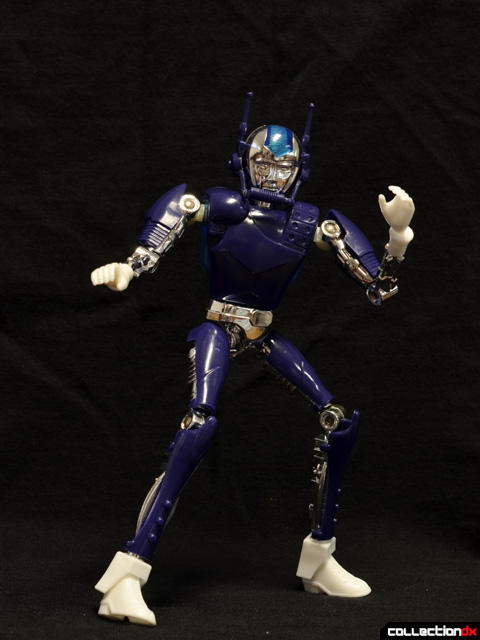 Like Micromen and Henshin Cyborgs, Timanic figures are highly posable.  There is no O-ring or rubber band in a Timanic, however, so posing can be a bit stiff.  Thankfully, the articulation points do not feel quite as fragile as the armor mounting points do. 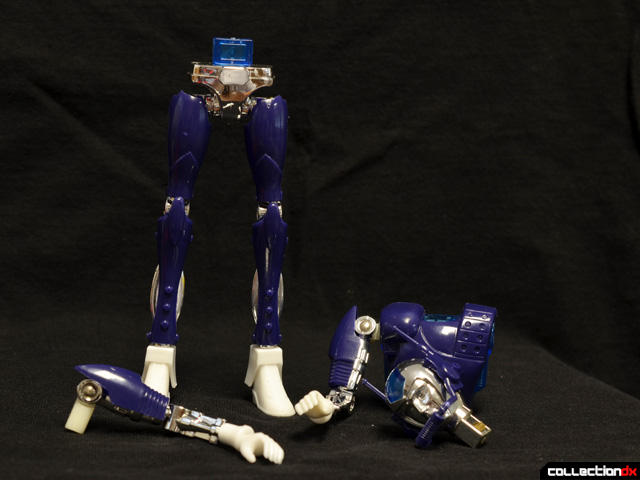 Tiamnic figures also disassemble, similar to the interchangeability of Henshin Cyborg and the Microman 5mm system. 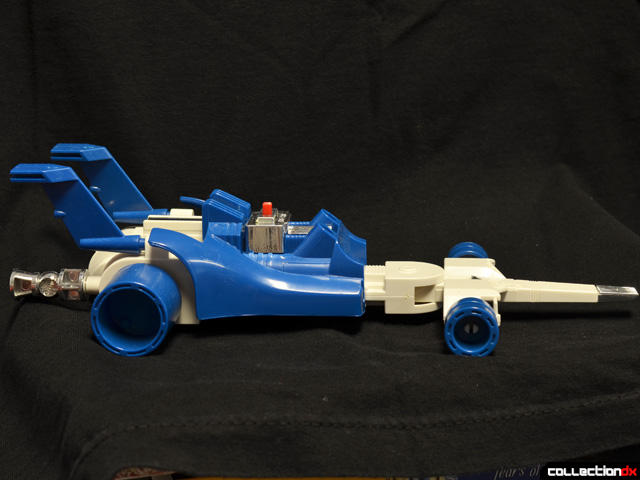 Timanic vehicles came in two flavors, Time Machines and Nic Machines.  Time Machines were the larger and more complex sets, and Nic Machines smaller and simpler.  Time Machine 2 is a funky white and blue space Formula 1 race car.  As Takara sci-fi vehicles go, it is a bit uninspired, but it is still a chunky and fun vehicle toy.  There are rubber band tires for the front wheels in the box, but I am sure they will break if I try to slip them on.  I believe there was also a sticker sheet for the vehicle at one point, but my sample did not come with one. 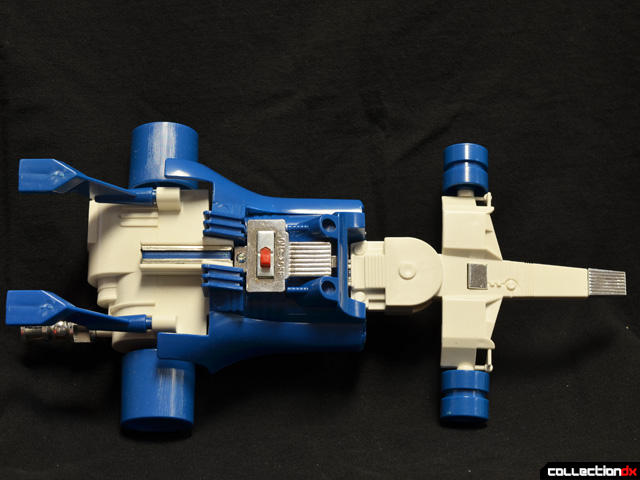 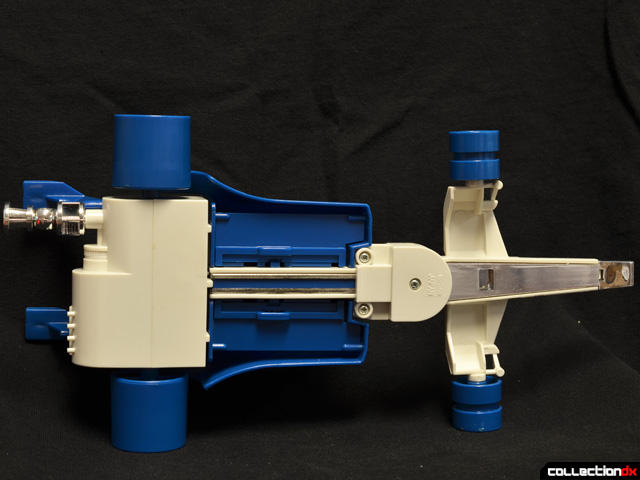 The front axle and nose of the car can steer from big hinge behind the wheel mount. 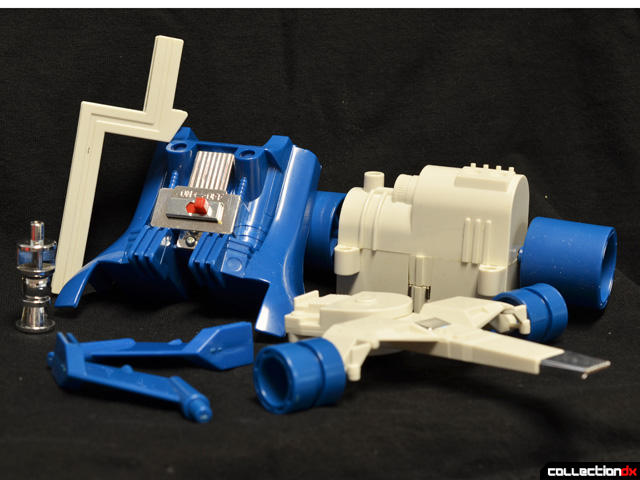 The Timanic vehicles come apart and feature interchangeable parts built on a system of magnetic parts. 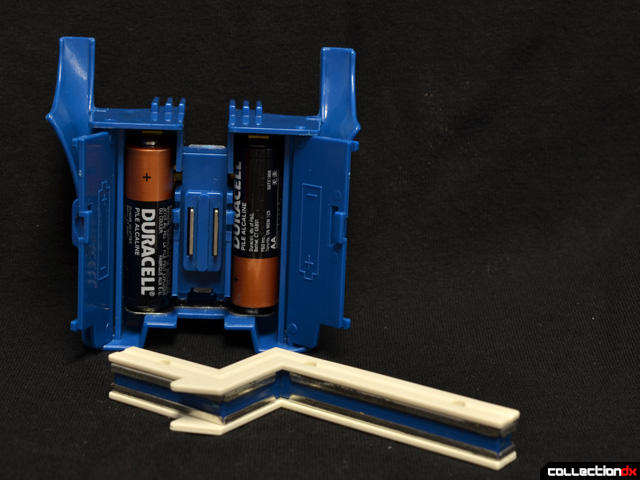 This is where things get completely bananas.  The central spine of the vehicle contains two magnetic rails, and the vehicle parts all affix to these metal rails.  Because the magnetic rails are metal, they also conduct electricity.  The main part of Time Machine 2 contains two AA batteries that send power across those rails.  Opening the battery cover doors is scary because that blue plastic feels a bit fragile, but it is totally worth the risk. 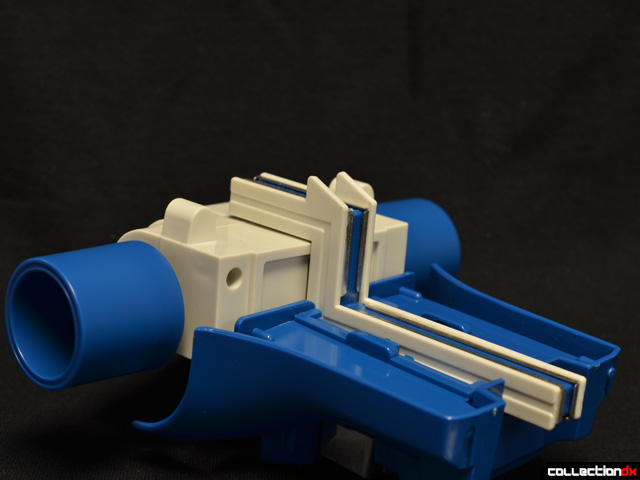 The back wheel section of TM2 contains a motor, and when connected to the battery pack via the central spine, the wheels spin.  The motor is LOUD! 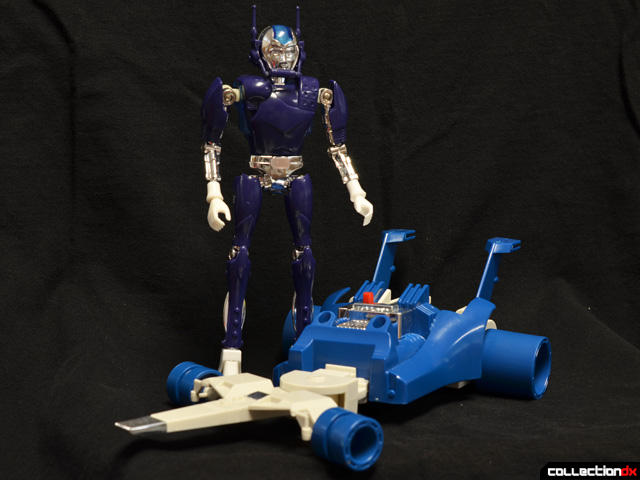 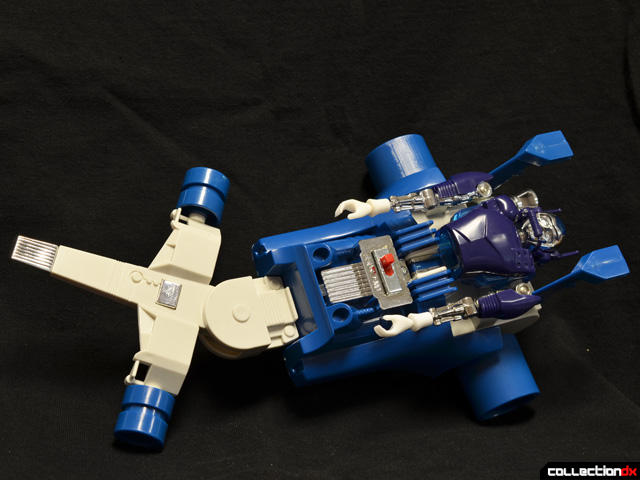 Remember those metal rails on the front and back of Timanic's torso?  They also mate up with the magnetic spine so Timanic can ride/merge with his pimp ride! 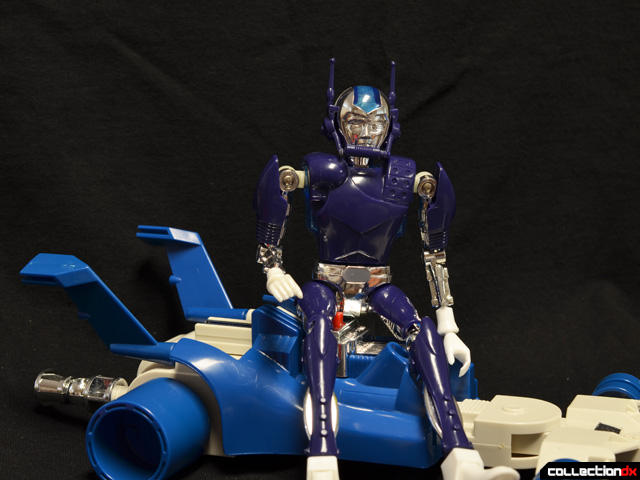 That's not all!  Those metal rails in the torso make up with contacts in the neck.  When attached to a magnetic rail with the power on, Timanic's head lights up!  I have to admit, however, that the lights shown are not the originals.  The little tiny wire coming out of the bottom of the hand-blown bulb in the head had broken, with no way to repair it, so I fabricated a whole new assembly with new contacts and replacement grain of rice bulbs.  It was pretty simple, and really adds to the figure.  One of the last releases in the line was a Deluxe Timanic figure with a backpack that contained a single AA battery to power the light without a vehicle. 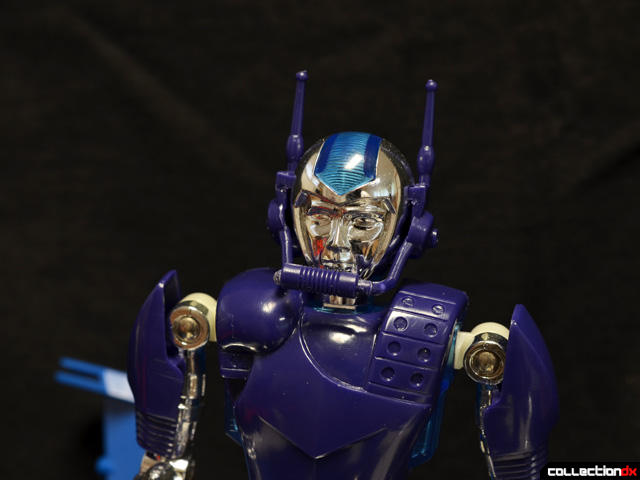 Interchangeable parts means that the car can be reconfigured into all sorts of things.  My current favorite setup is this heavy flight pack for Blue Timanic. 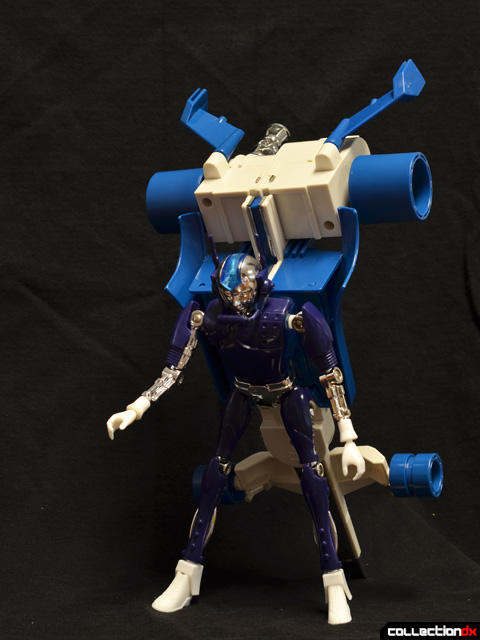 Timanic is an odd little toy line from an odd point in time.  I certainly would not recommend everyone run out and try to buy some, but fans of Microman and Henshin Cyborg could do worse.  I think the magnetic rails make for an interesting and novel interchangeability feature that's very different from the 5mm Microman style building system.  Motors and lights are always cool, and it is easy to see how ideas from this line trickled down into things like Blockman and even the Tomics line.  The figures are also quite striking, and do an admirable job of straddling a very awkward line between Micromen and Cyborgs. 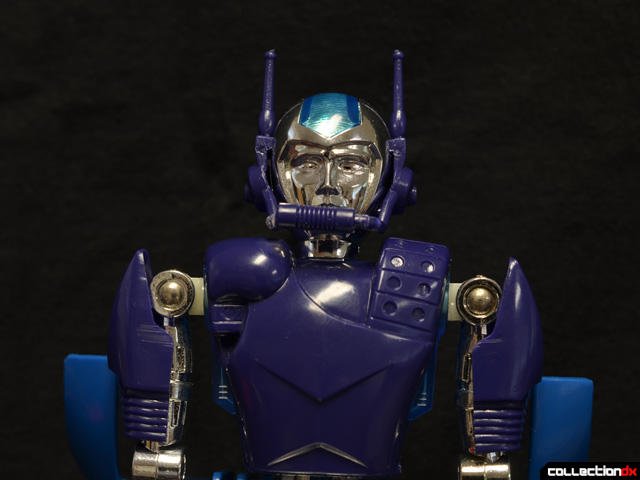 My Japanese skills are intermediate at best, but if you post up a somewhat higher-res scan of those instructions somewhere, I'd be willing and interested to give it a shot.

Could you scan it in and then send it to the WeOCR website (a free service) then run the text through a translator?

Why did it not know this existed? Insane.

Thanks, guys. I will work on getting a hi-res scan posted and let you know.

That's beautiful. I do miss the use of gratuitous chrome on robotic toys.

Thanks for doing a review on this. I love microman/micronauts and sort of dismissed these guys at a glance. I never would have guessed they were as big as they are. I always assumed they were Time Traveller size.
Vehicle motors!?!? AND They light up too?!?!?! Very cool.
I recognize the metal rails which were used again in Micronauts Battle Cruiser to power it up (remote control to motor I believe.)

Battle Cruiser (Microman Transfer Fortress) I believe came out a year or two before Timanic launched, but yes, it uses the same connectors for its magnetic electrical bits.

Very good review. The figure isn't nearly as posable as its Microman contemporaries, and the softer plastic parts are extremely fragile as noted (my figure has a couple broken armor tabs) and I should point out that the hands have a 5mm grip, but don't be tempted to make use of it to hold 5mm accessories, for the thumb will eventually crack. But with that in mind, it's a great toy to have if you loved those Micronaut/man cuffed hands and shoes and wanted to have a bigger figure that had them.

NicMachine 2 also is what the fairly rare Micronauts Hyperion vehicle was based on with some serious retooling. http://innerspaceonline.com/hyperion.htm
http://www.flickr.com/photos/microbry/sets/72157617364485801/

Huh, I have the blue Magneforce guy and totally did not connect that... thanks!