Any warm-blooded kid over the age of about 30 is likely familiar with the classic Kenner Star Wars action figure line that debuted in 1978 and had a lasting impact on the toy industry.  Outside of the United States, however, there were toys released by companies other than Kenner that are also really terrific.  You may have heard of one such company, none other than the Japanese titan, Takara!  The most prolific and common Takara-made Star Wars toy is a wind-up R2-D2 that is around the same size as the Kenner release and was available in Japan and Canada.  The toy is all plastic, and who has time for that?  Where Takara really flexed their creative muscle was in a brief line of proper chogokin Star Wars figures made on a larger scale than the Kenner toys.  Info and pics of these toys can be hard to find, with the best English-language write-up appearing in the final issue of Super7 Magazine (now available for free here), but even that has hardly any photos of the toys.  I’ve been working on collecting this line, and the first one I’ve managed to get in my hands is none other than the main Star Wars droid himself, R2-D2.  My goal with these reviews is to provide some much better pics of the toys than have been previously available, and to showcase how darned cool they are! 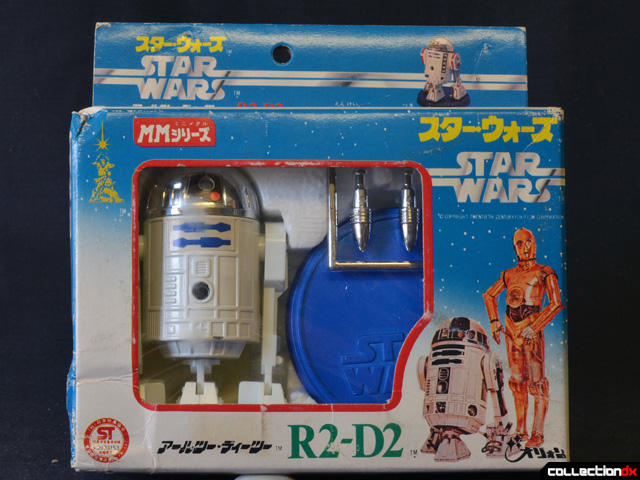 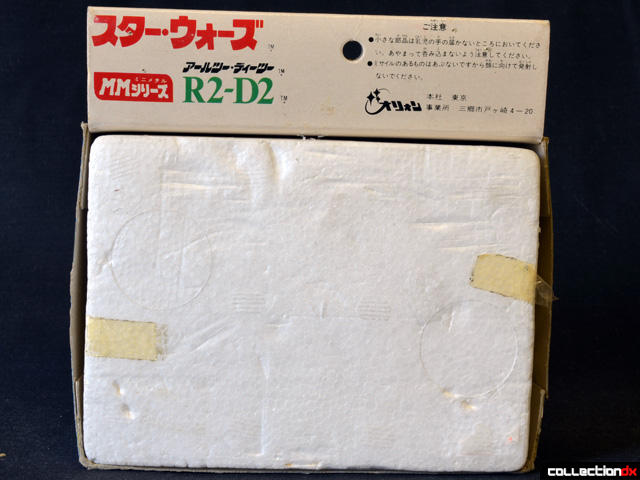 There are actually a few different Takara-made R2-D2s with varying amounts of metal and action features. What I’ve got here today is the smallest fully painted diecast R2, which was released in the blue window box seen above and a black printed graphic that matched the others in the line and is apparently much harder to find.  The blue window box is open on the back, exposing the styrofoam that keeps the toy inside safe.   Visible through the window is the R2-D2 toy, a chrome sprue of missiles, and a blue plastic display stand.  My example was sold as Mint In Box, and there does not appear to have been anything to the packaging to hold R2 in place, so he has scuffed up the inside of the window over the years. 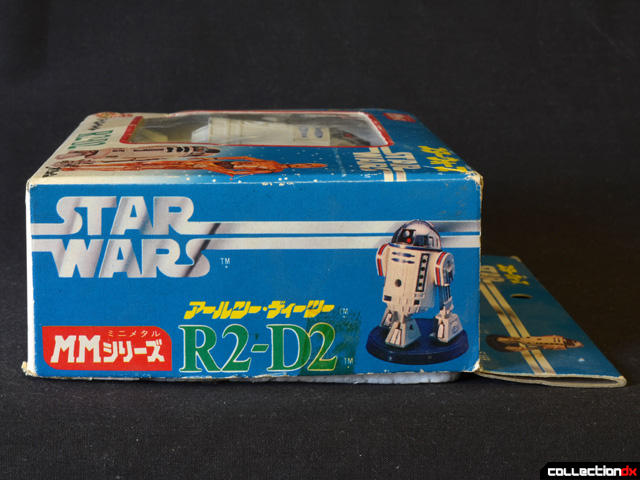 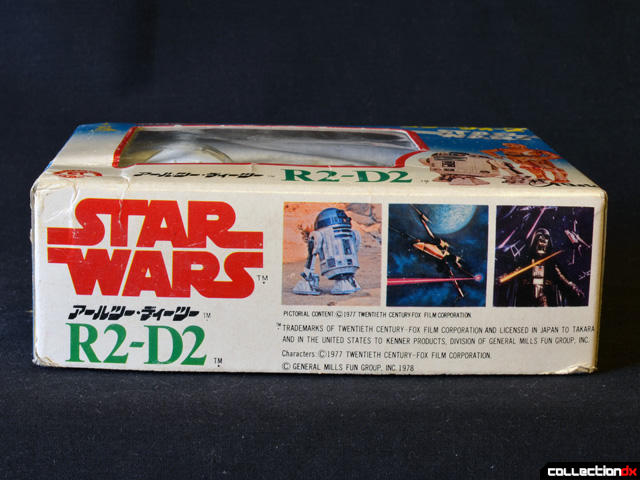 The two side prints are identical, and the bottom of the box shows off other items available. 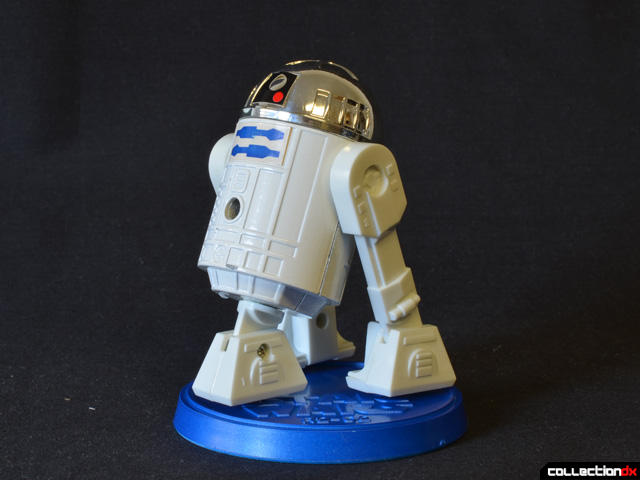 Out of the box, R2-D2 stands around three inches tall, give or take how you adjust the legs.  R2’s third leg is not removable, so he can only be displayed in rolling mode.  There is one silver metal wheel underneath each foot so the toy can roll. 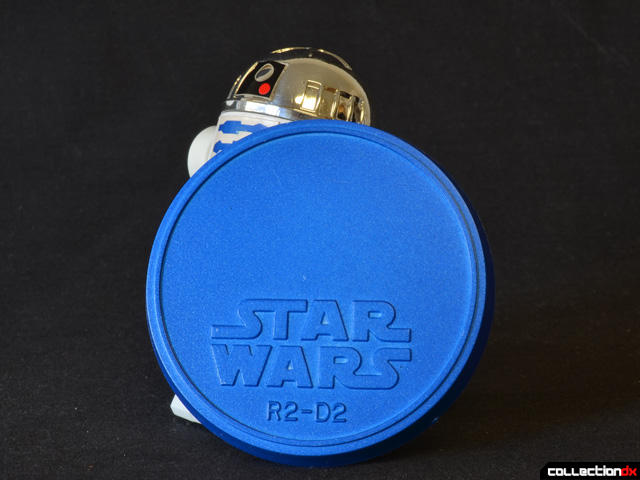 The stand is molded in white plastic and painted blue on the topside.  It’s nothing too exciting, but has a nicely molded logo and serves its purpose. 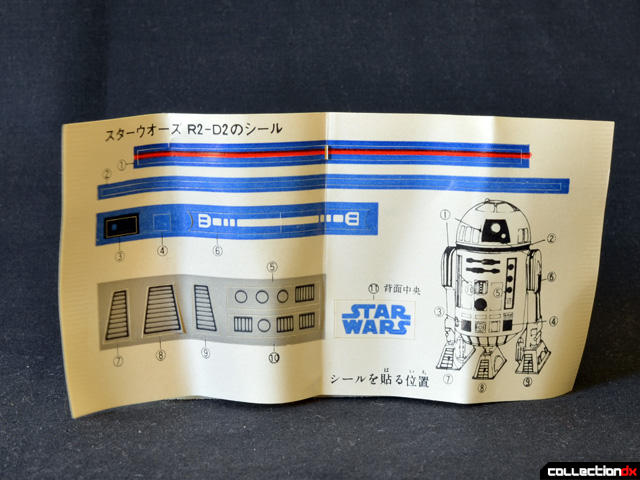 The only included paperwork is the sticker sheet, which I was thrilled to find intact on my toy.  The sheet was folded and tucked under R2, so it has curled up a bit over the years and the stickers are pretty dry.  I am hoping to press them flat with some books and get a hi-res scan to print up some replacement decals, because they really complete the look when applied. 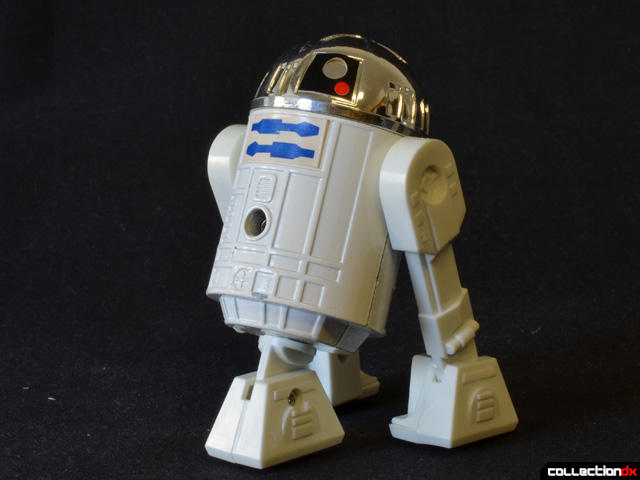 R2-D2’s main body is made from two hefty diecast metal pieces, with the head and legs being plastic.  The dome is finished in beautiful chrome, and the head clicks when turned.  The only factory-applied stickers are for the ‘face’ and chest panels.  The hole in the belly is where the chromed missiles fit in, but since mine are still on the sprue I could not show off this feature.  R2-D2 is considered one of the primary heroes of the Star Wars saga, but just think of how much more effective he could have been in bringing peace to the galaxy if he was packing some proper heat. 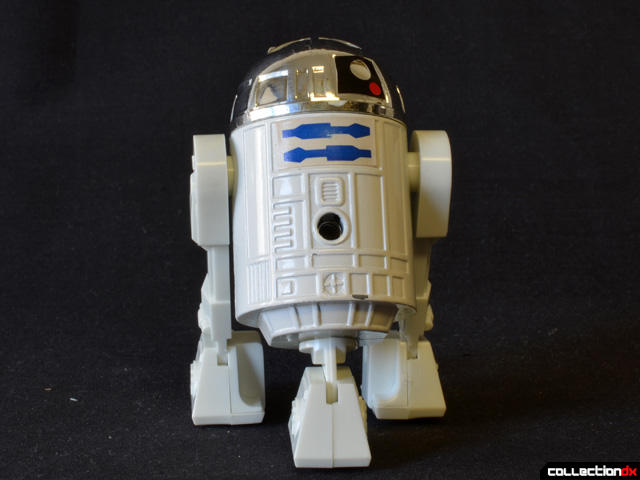 The toy is a little bare looking without the stickers, which provide color to the major detail features on his front.  The stickers also include some dope pinstripes for the leg arches, just to get a little bit of that 70's Japan funk in there. 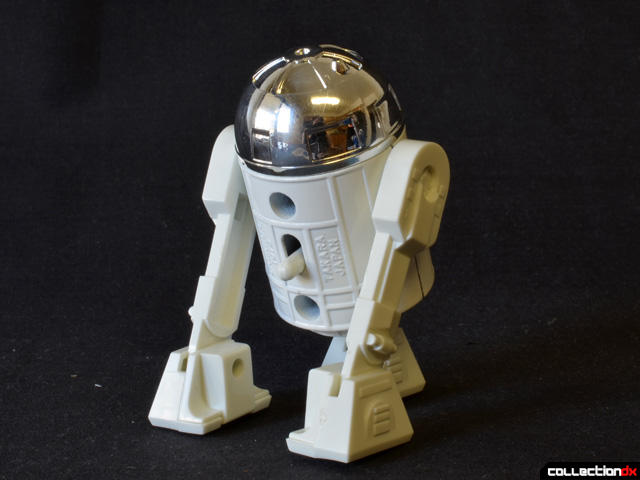 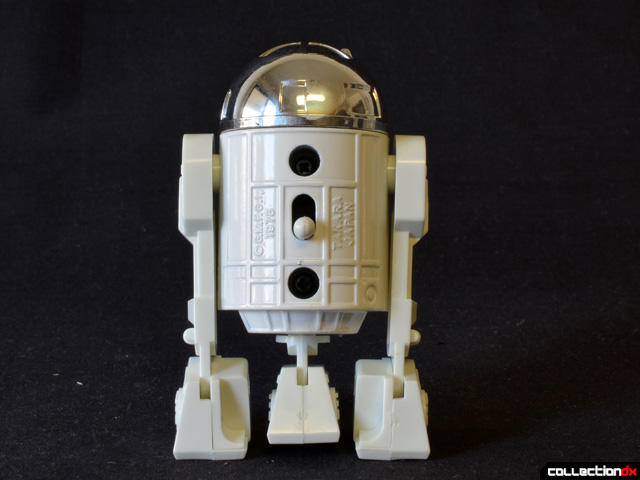 From the rear the Country of Origin (COO) and copyright stamps are visible, as well as the action feature trigger.  The COO reads ‘© G.M.F.G.I, 1978’ and ‘Takara Japan’.  GMFGI stands for ‘General Mills Fun Group Inc.’, a branch of General Mills that produced consumer goods and owned Kenner, and was the license holder for Star Wars merchandise. 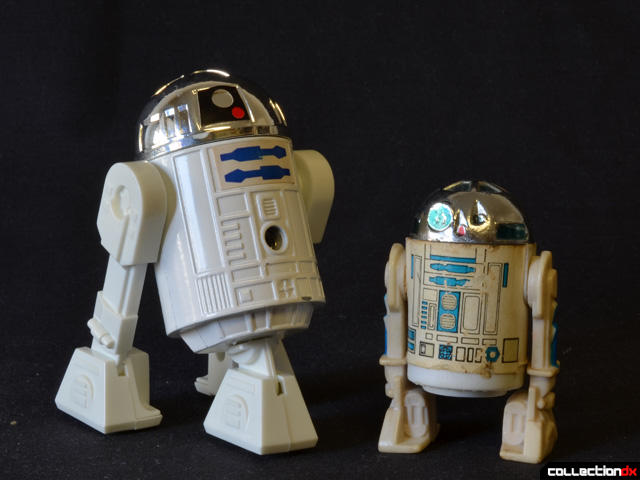 Putting Takara’s diecast R2 next to the standard Kenner release shows off the differences in size and detail.  The Kenner toy is obviously an iconic piece of history, but the Takara toy feels a bit like showing off by comparison.  In the late 1970’s, Japan was really leading the way in toy design, as evidenced by the many diecast robot toys available, as well as far more sophisticated action figures like those of the Microman line.  Kenner’s offerings stand up against other American contemporaries like Fisher Price’s Adventure People line, but cannot hold a candle to what was being released in the Japanese market.  Takara’s R2 is a proper robot toy, with sharp lines, engraved detail, and a shooty action feature. 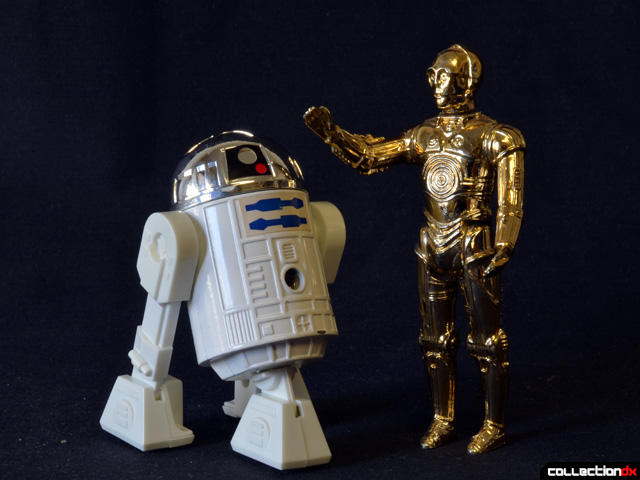 Takara’s R2-D2 does not size up correctly with Kenner’s C-3PO figure, but I think they still look great together.  3PO is one of the best sculpts in the Kenner line, and that gold chrome cannot be beat.  Takara also released their own larger diecast metal C-3PO that I will be reviewing as soon as I get it in from Japan. 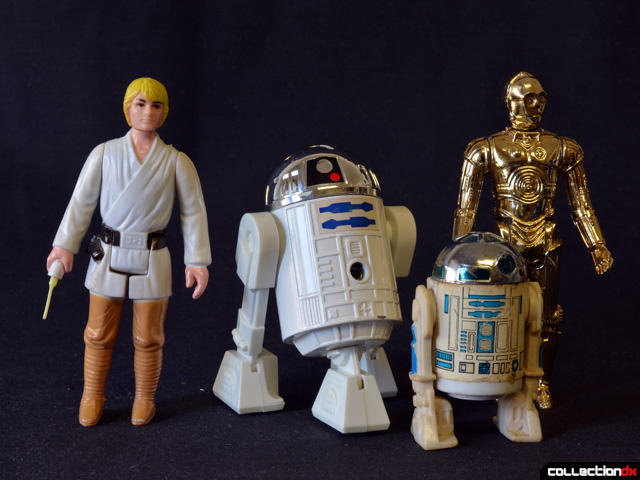 Here’s a bigger family photo comparing the diecast R2-D2 to his American contemporaries.  If American kids in 1978 had seen that there was an R2-D2 toy built like their Shogun Warriors figures and that they could not buy one, we probably would have gone to war.  Diecast lust must be satiated. 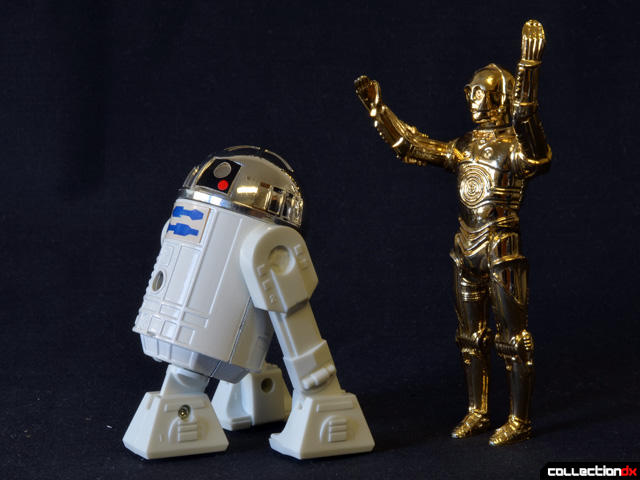 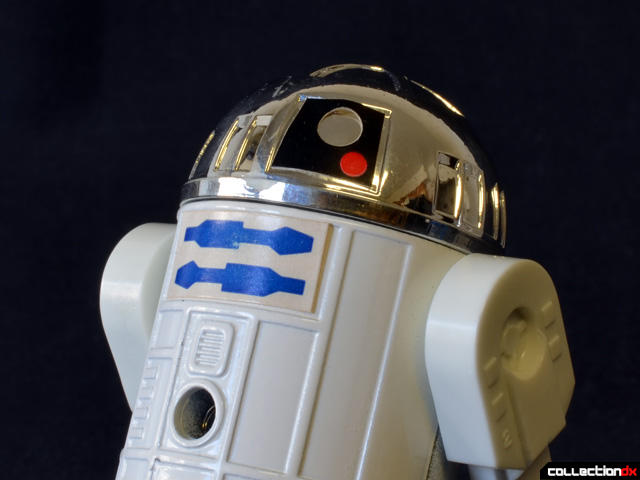 I’ll leave you with a portrait shot of this wonderful little toy.  Collecting vintage foreign Star Wars toys can be a bit of an adventure, but they are out there, and they are incredible.  Look for more reviews of the rest of the Takara diecast line as I receive the toys.