We've talked about it before, but a refresher is in order for those of you new to us. Force Five was a weekday after school show put together by Jim Terry Productions. Jim Terry brought over 5 unrelated Japanese shows and aired one each weekday. Most of these shows are names of legend. Even if you did not watch them, you likely know them now.

Which one of these things are not like the others? While most of the shows celebrated giant robots and rocket punches one stood out for being different - Spaceketeers.

Spaceketeers was the English language dub of Starzinger - a Japanese animated version of the classic tale "Journey to the West". As the epic Chinese saga is unfamiliar to western audiences, they instead tweaked the story and characters to something more familiar - The Three Musketeers.

None of my friends liked Spaceketeers. It didn't have any giant robots in it. But something about it resonated with me. Spaceketeers was the only one of those shows that I play-acted. I ran around my yard, pretending to be Jessie Dart, with an old broomstick that I pretended was his Astro Lance. And the garage, that was my Cosmo Queen.

The Cosmo Queen was Princess Aurora's starship. In it, the three "Spaceketeers" traveled the galaxy and defended the Princess on her journey.

Toys of the Cosmos Queen were made by Popy, as most were during the day. Nowadays, finding a Cosmo Queen toy is both rare and expensive. The shining star of the Starzinger toys is of course the DX Cosmo Queen, but that's for another time. Today, we talk about the ST. 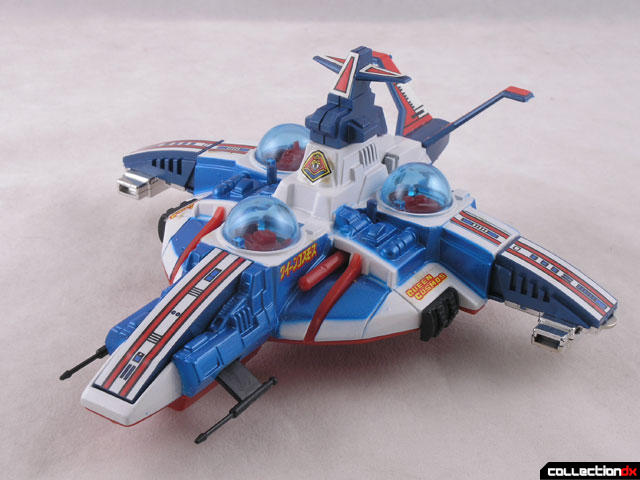 At 7 inches long and 7 inches wide, it's not a massive toy, but the top half of the hull is diecast, giving it a surprising weight. Materials are a mix of diecast for the shell, chrome engine exhausts, black pvc for the guns and side shields, and that horrid fragile blue Popy plastic for other parts. 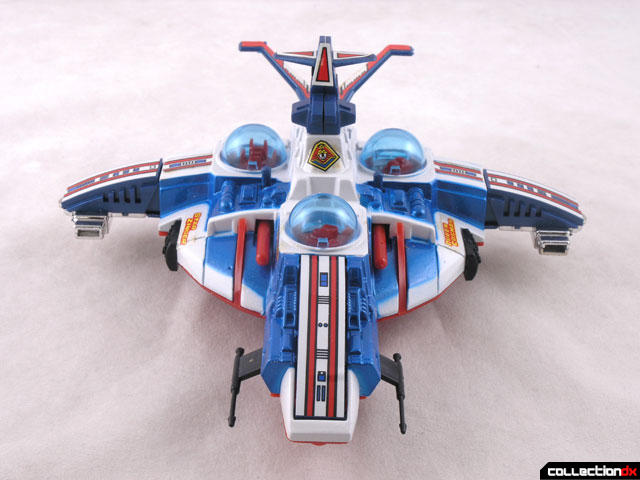 The ship features three clear domes that house the individual vehicles for the three characters. In the center is the command tower. Each dome can be opened, and each small plastic ship removable. 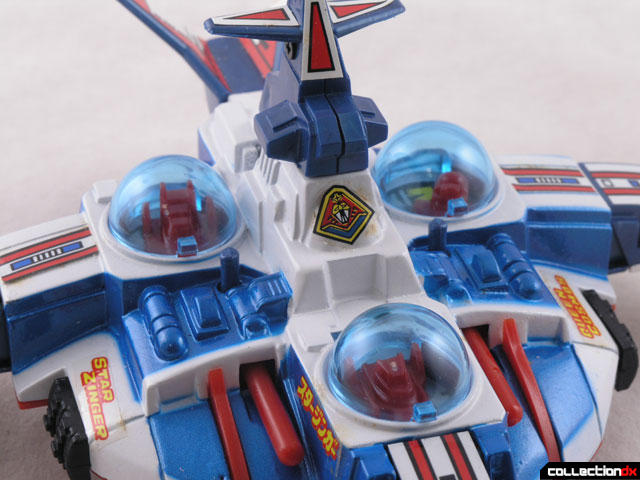 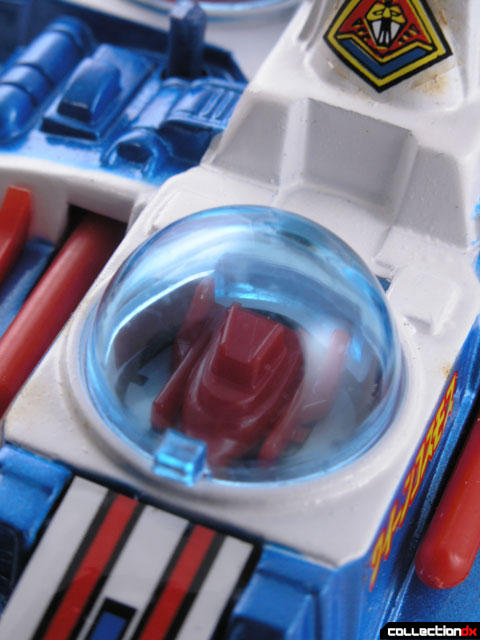 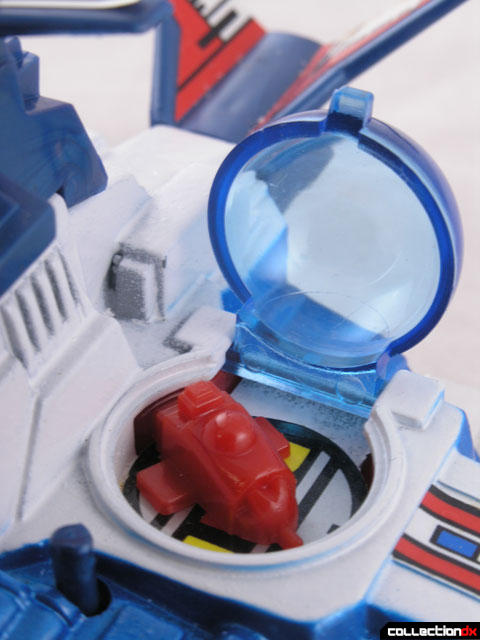 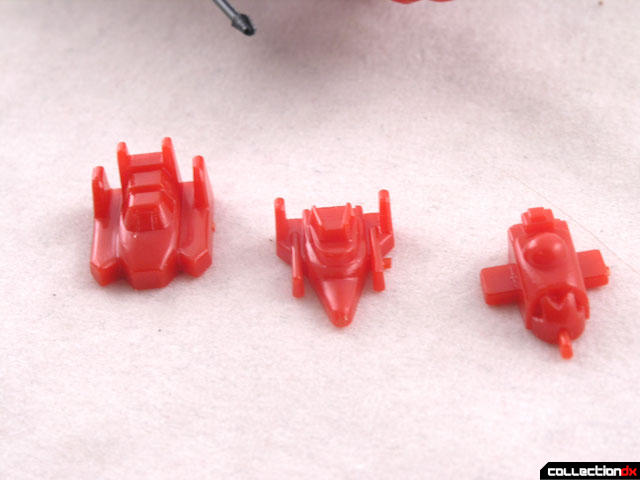 The front of the ship features a spring loaded front hatch, activated by a button at the bottom. Once opened, you can place any of the three ships onto a small tab, which you can then pull back and latch. Push the button behind the ship and POINK! Out shoots the ship. 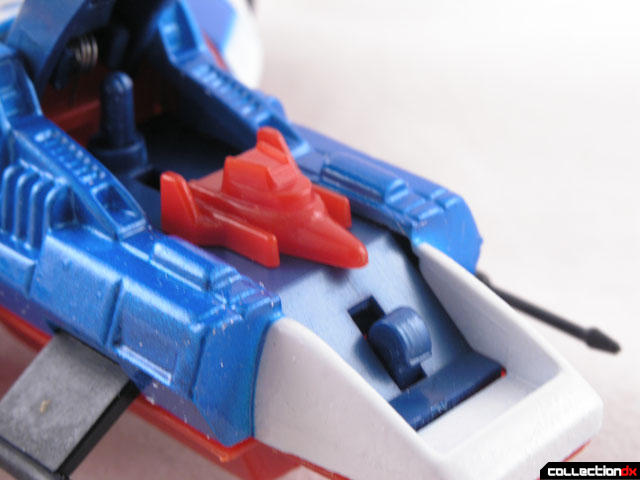 But that's not all of the Poinking action. On either side of the front dome there are large red firing missiles. Each shoots like a MoFo when you press the blue buttons on top. 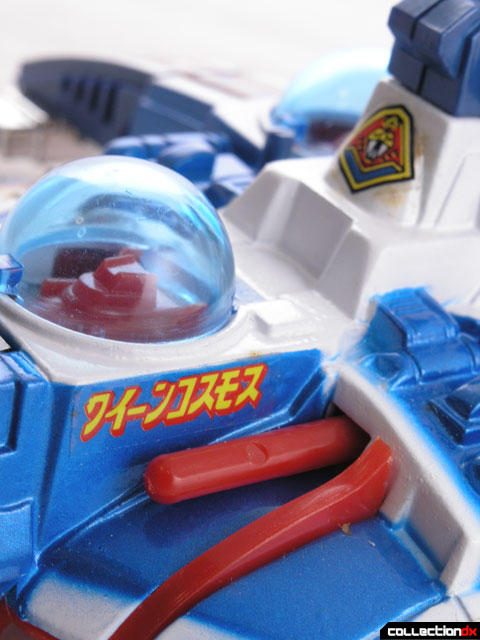 One last thing while we are talking about the top area - on either side there is a black pvc section I can only call "shields". These shields can move in and out for some reason. 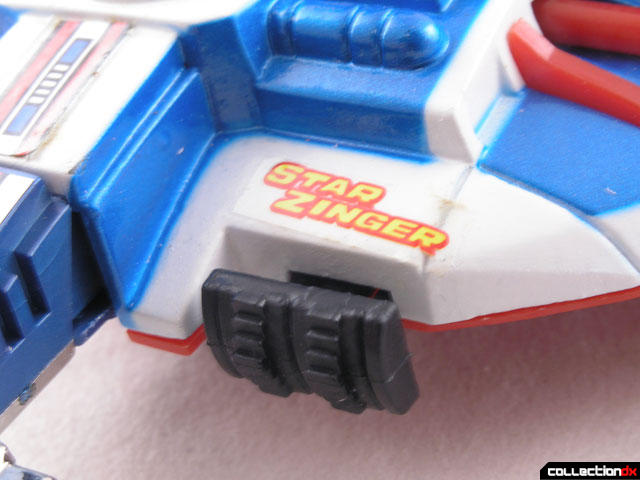 The undercarriage of the ship is plastic, with alcoves for the wheels. The wheels are shiny. 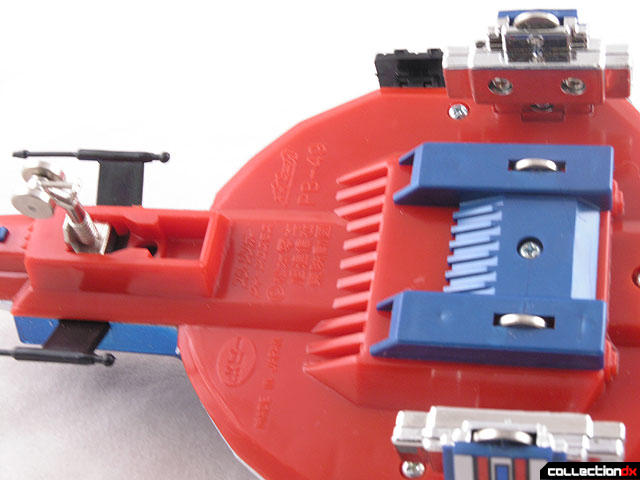 The front landing gear can fold down, and so can the side wings, which also have shiny metal wheels. This creates a sort of tripod mode. I really don't remember it's purpose in the show, its been so long. But it looks cool and adds play value. 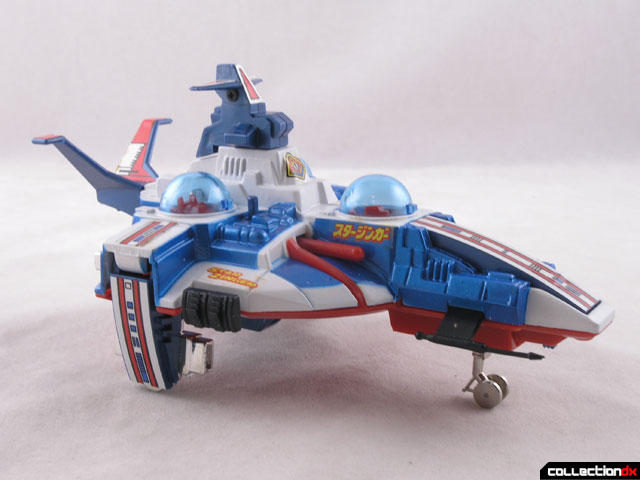 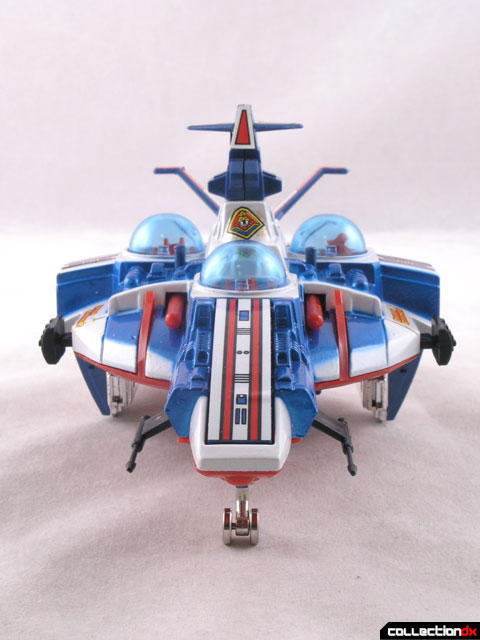 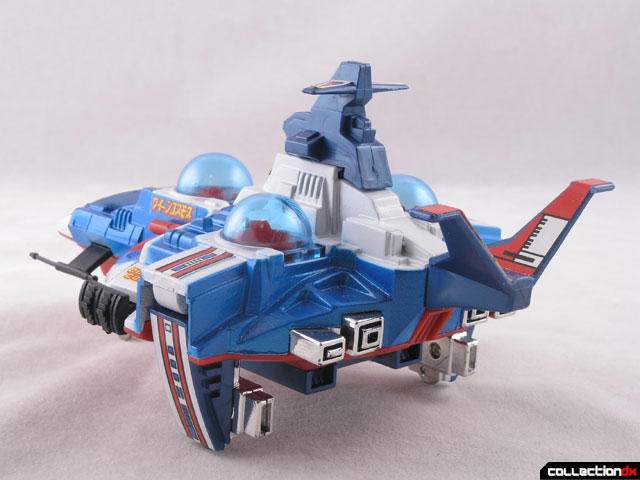 The overall design of the ship is very toy-like, from the primary colors to the large decals in both English and Japanese. It is bright, colorful and fun. Everything a toy should be. Why aren't they made like this anymore? 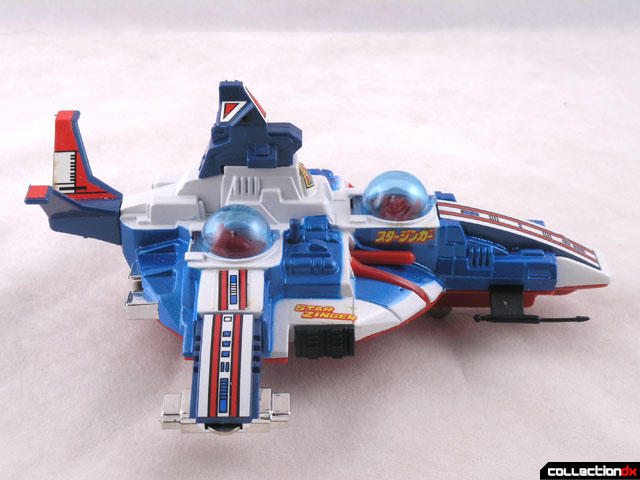 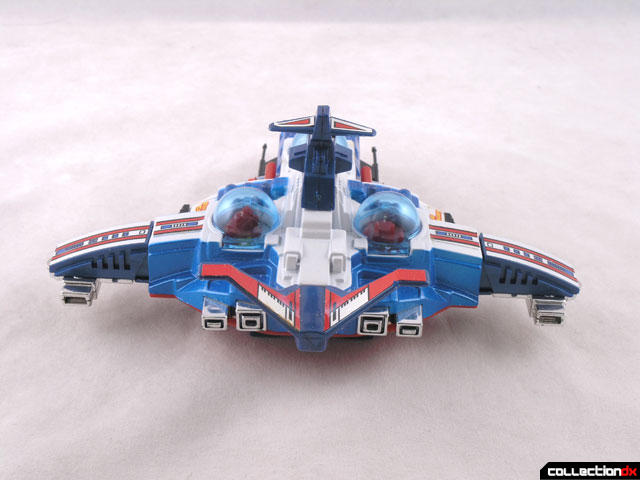 And the icing on the cake? The box. Ooooh the box. It's gorgeous. Primary colored precision, vintage Japanese style. Lust inducing. 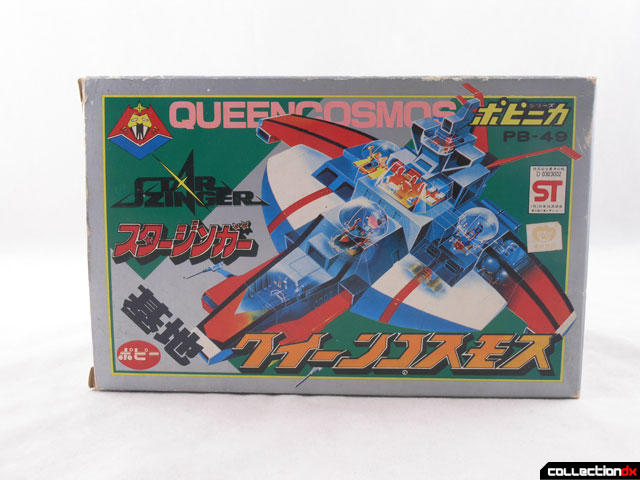 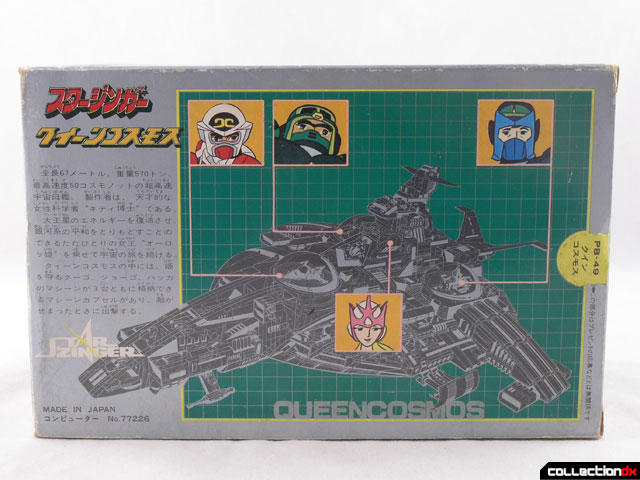 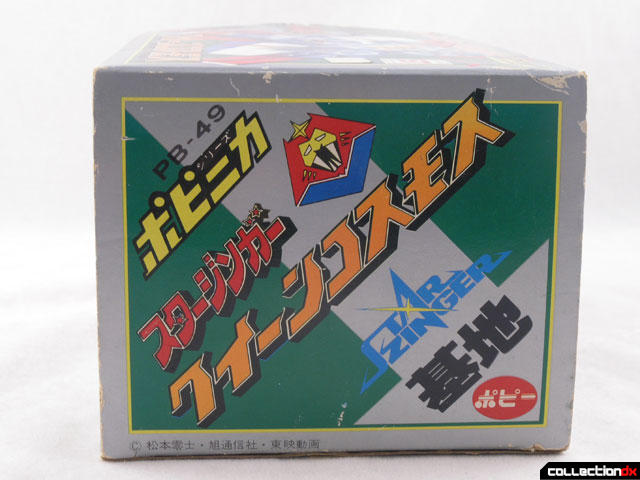 It's a harsh truth we all know too well. These things of beauty, they come at a price.

I remember watching this show in Italian back in the 70s and 80s. The Italians were wise enough to leave the original names: Jan Coogh, Sir Gorgo and Don Hakka plus Princess Aurora. The purpose of the side wings which fold down is to act as a VTOL system. I didn't quite like this anime as it didn't have giant robots and was too long for my tastes. However it was quite an interesting anime. Thanks for sharing this review.

My secret hope and prayer is that Bandai, Fewture, or someone releases a modern version of this...with the five million mazingers on the market...you would figure someone would...but alas all we can do is hope. At least Yamato released a Danguard Ace...this is the only thing missing from Force Five in the modern toy world...sniff...Princess...Star Crow...Porkos...Jesse Dart...WHERE are you???

Question, you going to do review of the big one you were fiddling with during the pod casts????

Because these are so rare and so hard to get...I have to live vicariously through pictures...that and the Popy DX version of the Yamato...

Admittedly, that ain't a bad design for a ship. It's not a typical flying sea-going battleship like the Yamato, yet it's got a little flying saucer-ish feel to it to twist things up. (Only complaint I got is perhaps there is a bit too much red.)

Everything a toy should be. Why aren't they made like this anymore?

LOL. I'm right there with ya, Josh, makeshift Astro Bat and all. Despite the cheeseball voices, something about Spaceketeers really clicked with me. In fact, I can even recall visiting a Kay Bee in my late teens and finding a double-bladed extending sword/staff that would have made an excellent version of Jessie's weapon. Too late for me, though. Heh.

Nice toy. I took a stab at this during the big auction. I've chased all the toys over the years but never managed to snag any. The Star Crow is near the top of my list, but the Queen Cosmos isn't far behind.

I'll second that request for a write-up of the DX! ;-)

Being nine years old in 1978 that would of made my christmas!
Great looking Toy! Glad to see the box too. Nice find.