Among the characters that Mattel chose to import from Popy's Jumbo Machinder line, the Shogun Warrior Gaiking is easily the most different from it's predecessor. It's almost a completely different toy. Since I don't actually own a Popy Gaiking, for the purposes of this review I'm actually comparing the Mattel version with the Unifive version, which is basically the same thing.

The first difference you can't help but notice is that the torso has been changed. Instead of separately molded parts that open to reveal the missile launchers/storage racks, the entire torso of the Shogun Warrior version is one molded piece. Stickers provide the black of the eyes as well as the silver and red off the mouth and the effect is far less impressive. The missiles still shoot from the eyes, but now the firing mechanism is located on the back. It utilizes the same mechanism as the one found on the Popy Dangard Ace Jumbo. Of course, what this means is that now there can be no wings on the back like the Popy Gaiking.

The firing right fist was carried over, but here Mattel added a hinge that allows for greater poseability than before. But the downside to that is that now the symmetry of the design has been compromised. And the extra black on the right arm has always sort of reminded me of Canada's Greatest Athlete. With the missile racks no longer available inside the chest, they are now stored on top of the shoulders. Most of the Shogun Warrior Jumbos had the regular red shaft/white fin missiles, but my Gaiking has the opposite color scheme. 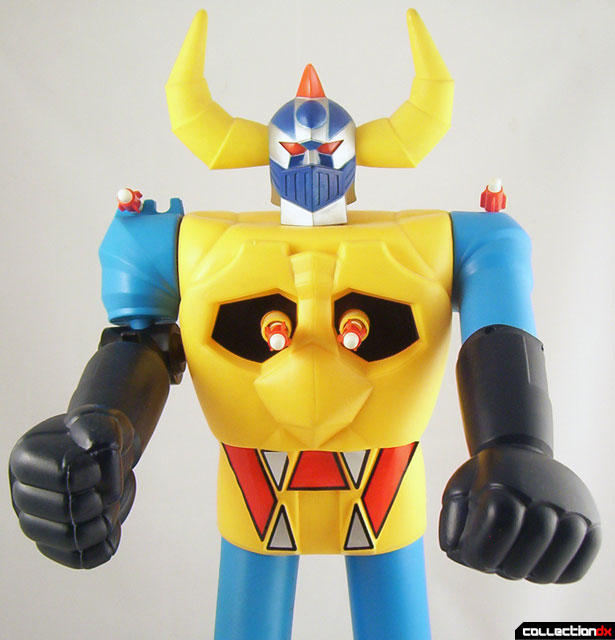 The "Counter Cross" weapons that could be removed from the legs of the Popy toy have been replaced with simple stickers on the Mattel toy. Most people hate this, but in a way, I think it works better on this toy, since the chest has also been simplified. I think if you had separately molded "Counter Cross" weapons on the legs, they would stick out much further than the now flat torso and the effect would be strange looking. Of course, it would have been better if none of these changes were made at all.

About the only things that were not changed here are the hips and the head. The head looks like the exact same sculpt, but the paint job is much, much poorer on the Mattel toy. Not only is it more sloppily applied, but there is no color within the grills of the mouth. That missing detail makes a huge difference. The horns were molded in yellow instead of gold, but I have to admit, even though the gold looks nicer on the head, I sort of like that it now matches the color of the chest. 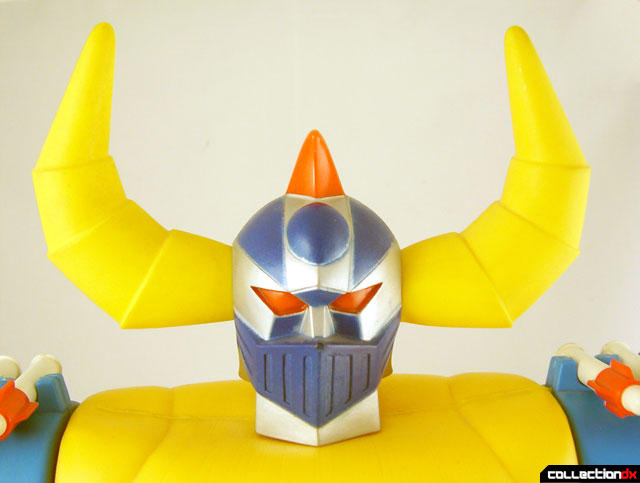 Now, you're probably reading all this and thinking, "Gee, Dave really hates the Shogun Warrior Gaiking" and that couldn't be further from the truth. I'm just acknowledging that it is in fact inferior to the Popy toy. But it's also the toy I grew up with and loved as a kid. Due to it's inclusion in the "Force Five" cartoon, which was widely loved where I grew up, Gaiking was a VERY popular robot and remains so to this day. Though the cartoon wasn't one of my favorites of the group, only it and Getter Dragon were chracters from the show to be released in Jumbo form in the United States, so familiarity alone made me love the toy as a child. And despite it's flaws, I still love it as an adult.

It seems all the Mattel Shogun Warrior Jumbos were produced in great numbers and are pretty easy to find on Ebay. However, as easy as it is to get the Shoguns, it's not so easy to get them in PERFECT condition. Often the boxes are pretty beat up and things like inserts and paperwork are missing. A perfectly deadstock example will command a much higher premium.

I've listed the original price for Gaiking as $13.88 because I've seen a picture advertising Mazinga, Dragun and Raydeen for that much, and until I know better, I'd assume that Gaiking was the same cost. If you know otherwise, please let me know. 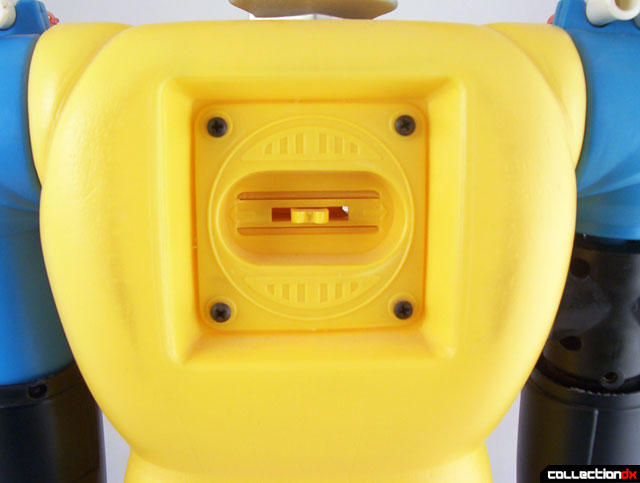 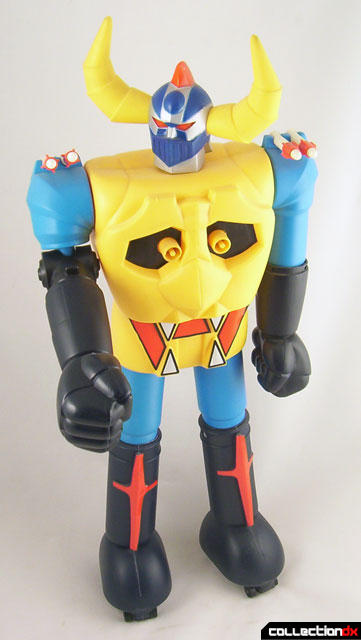 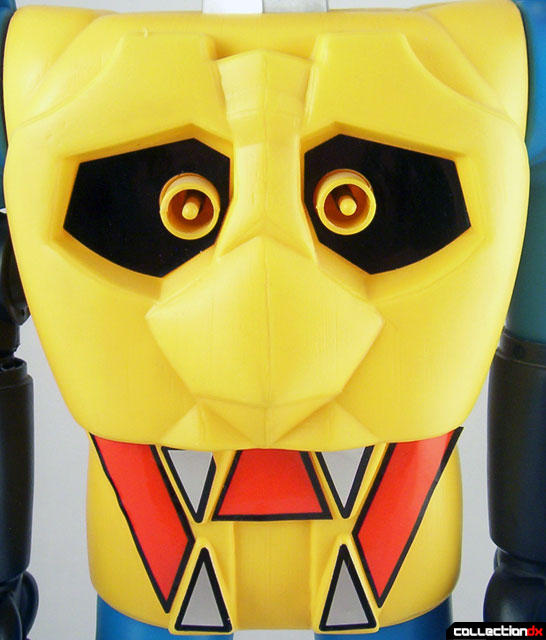 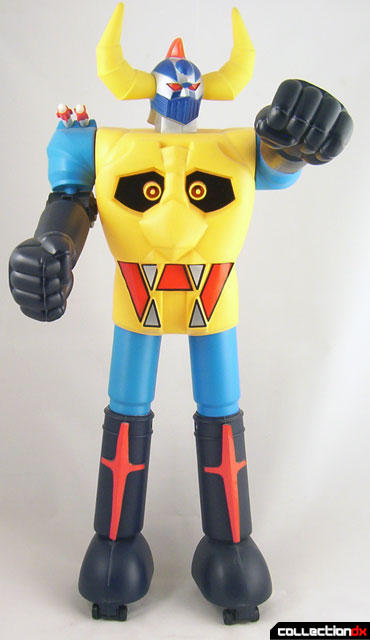 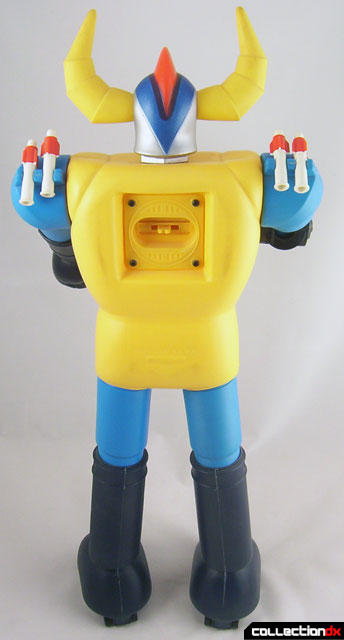 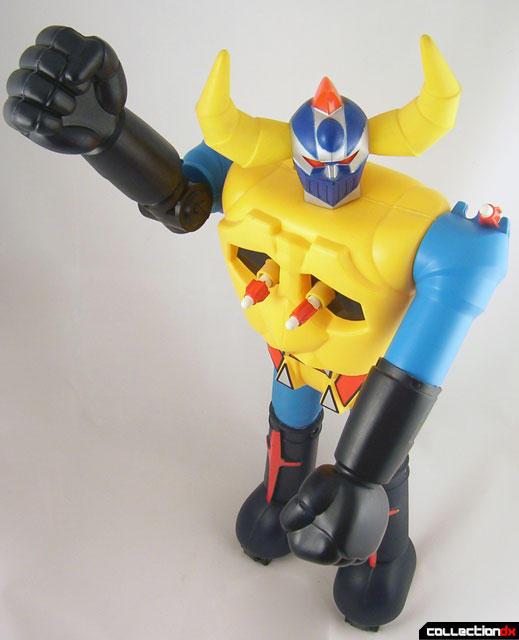