I purchased most of the die-cast Shogun Warriors that I own in the order that I did largely due to whichever ones turned up at a good value first. I didn't put much of a priority on any particular one...except Danguard Ace (and to a lesser degree, the Kargosaur. I made a point to win the first auction I saw for one of these after deciding to get the entire line. As I've said in the past, it's my favorite character.

Danguard (referred to as "Dangard" on the box) is part of the subset of Shogun Warriors toys known as the "Two-in-Ones". These were ostensibly intended to be something like early Transformers, in that each one was supposed to have two separate modes. As with most of the toys in the Shogun Warriors line, this is a re-branding of a toy original released in Japan by Popy, specifically the GA-78 ST Danguard A. 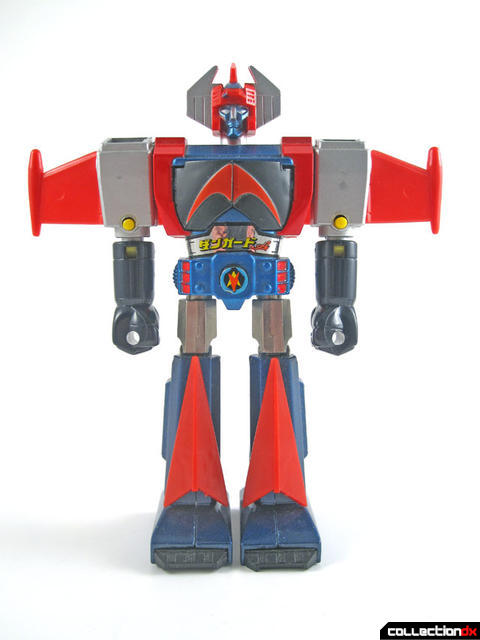 Like most of the robots in the die-cast line, Danguard comes resting in a styrofoam tray. I believe the tray was always colored white, unlike some of the standard, non-Two-in-One warriors who may have had green trays in their first releases. 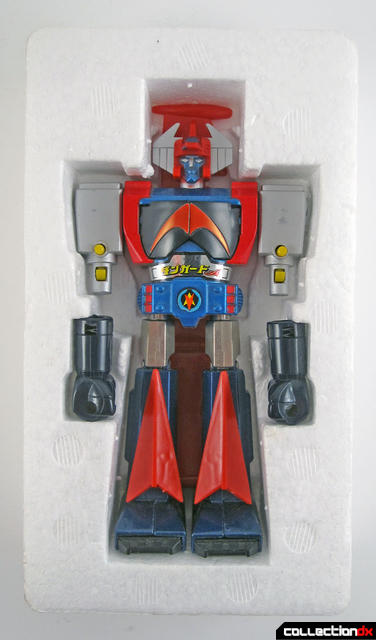 It stands at just a little over 5" tall and features heavy die-cast content. The helmet, chest piece, double lancers, fists, wings and bottom of the feet are plastic, but everything is good old fashioned gokin.

The sculpt of this version of Danguard looks a little short and thick compared to other toys and it's appearance in the cartoon, but I like it. It gives it a strong, compact appearance. Many prefer the DX version (only released in Japan) but for my money, you can't go wrong with Danguard either way. 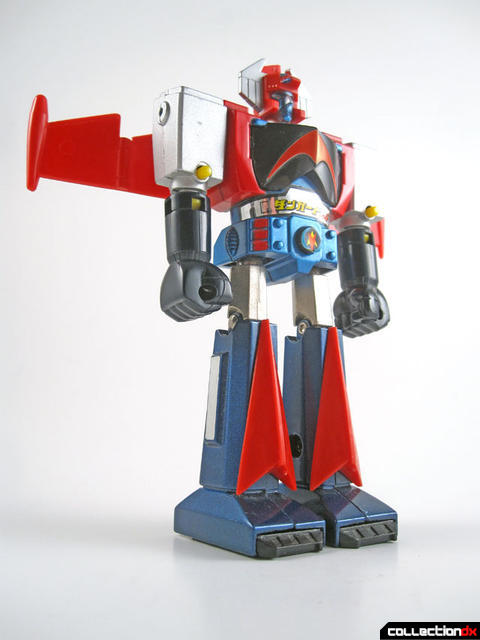 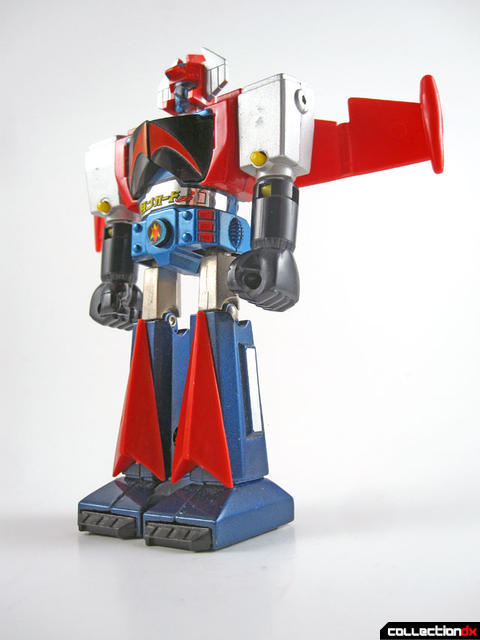 Articulation is limited. The arms rotate and the legs bend at the knees and hips, but that's it.

The fists do fire when you depress the yellow buttons on the biceps. 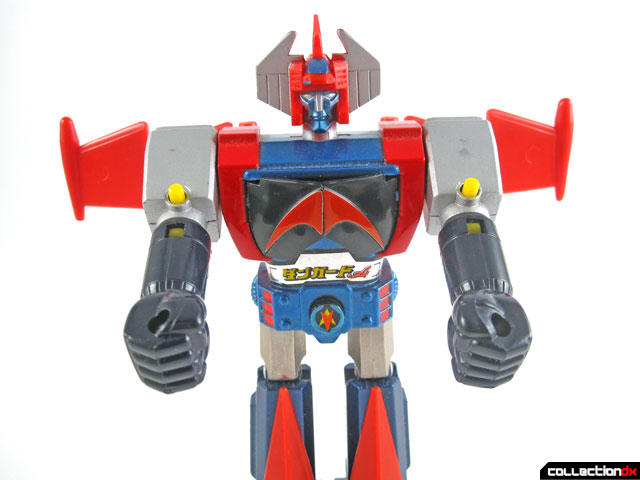 The chest opens to reveal it's inner mechanism, but unlike the Jumbo Machinder, there are no firing missiles to be found there. 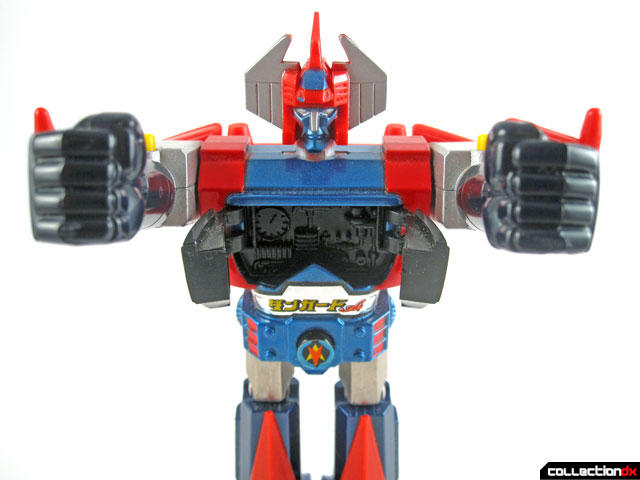 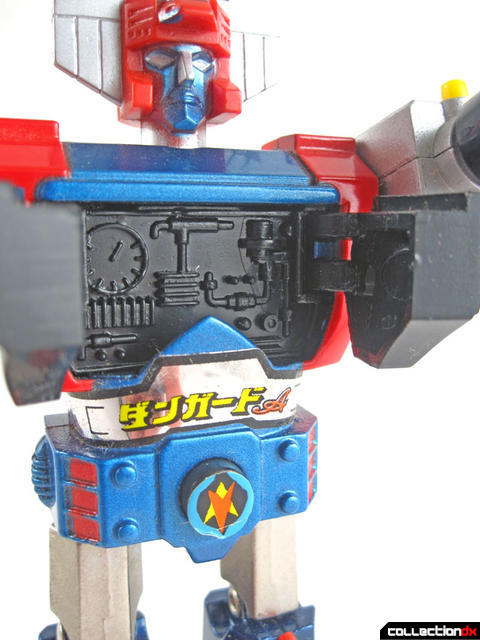 The double lancers do come off and can be held in the robots hands, however. This is not shown on the box, but is on the instruction sheet. 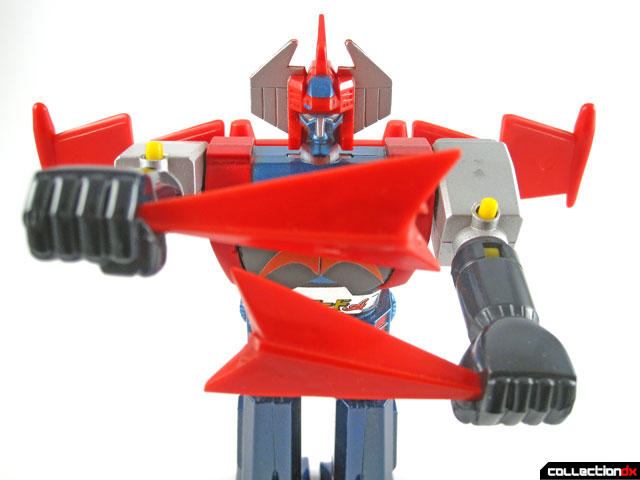 The wings attach to the back via two thick pegs. 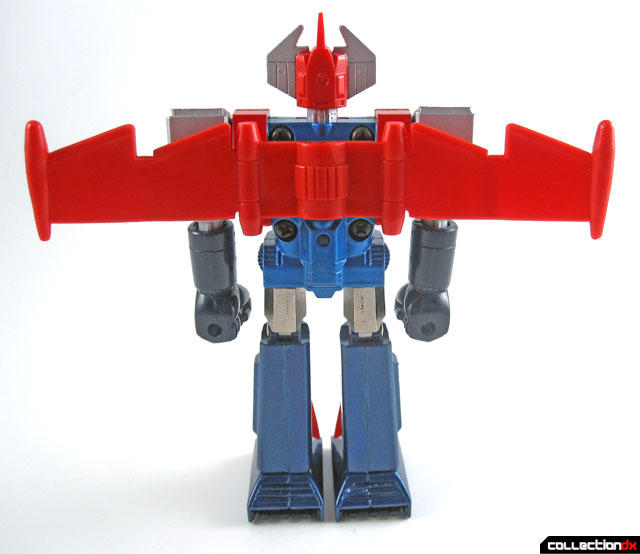 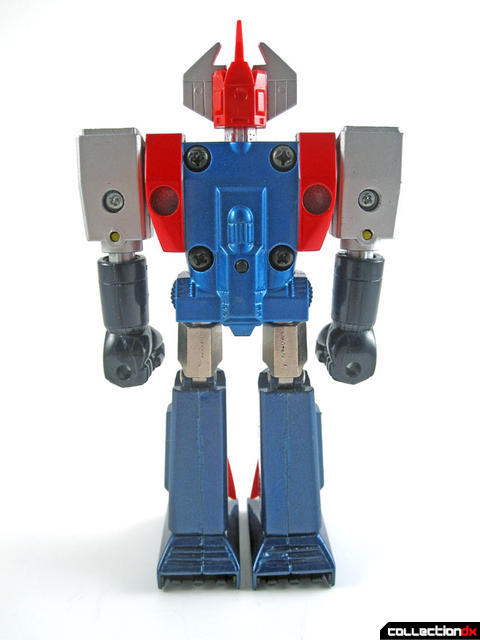 Lastly, the head also launches when you press the Danguard insignia on the waist. 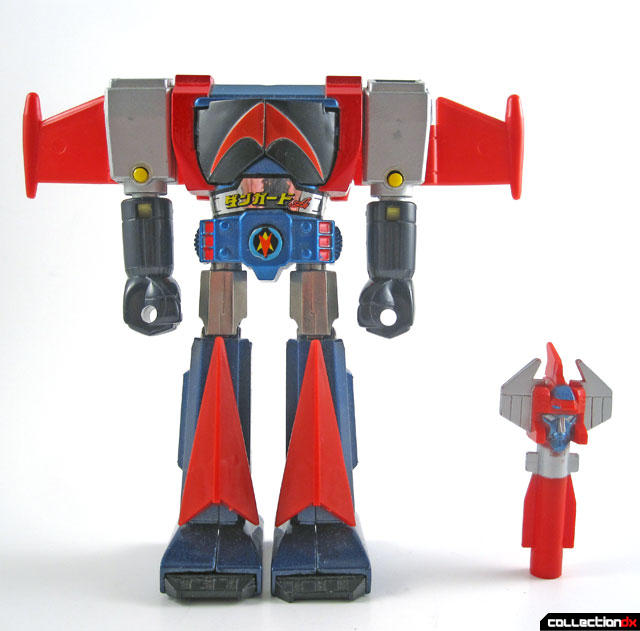 At this point, you might be asking "But Dave, what do you mean 'lastly'? Isn't this supposed to have a second mode?" True, but really Mattel tried to market this has something that it's not by saying it becomes a "flying wing" if you remove the head and fists and flying it around like that. It's a feature that isn't really a feature. Here's the picture from the front of the box. Pretty weak, right? 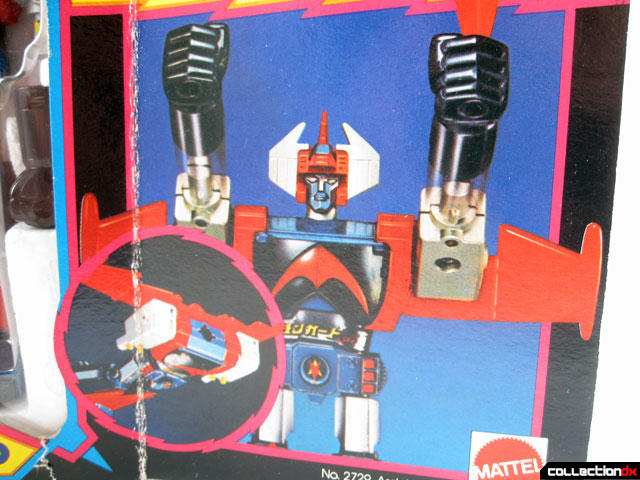 The Danguard Two-in-One comes in a cardboard box with a flap on the right side and an open window to see the toy. There is no cellophane in the window. Instead there is a harder plastic covering for the styrofoam tray that is molded to the robots body shape. This is actually a pretty decent way to package them. Too often those cellophane windows get torn or detached, making it really difficult to find intact specimens of certain toys. That's unlikely to happen here, although the covering is at risk of being lost entirely. 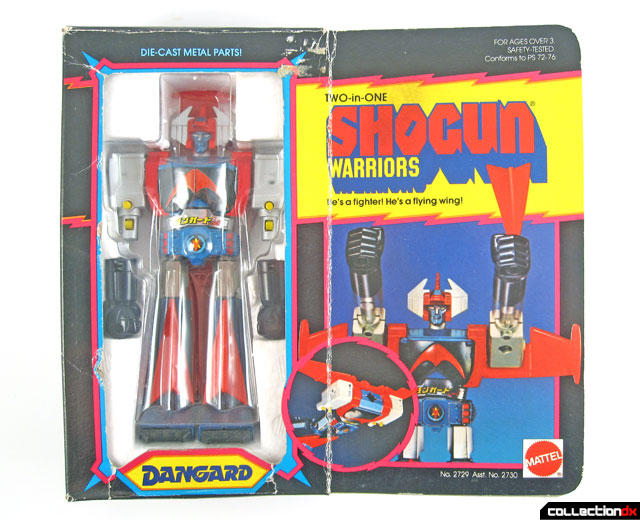 The back of the flap and sides of the box feature artwork demonstrating it's gimmicks. 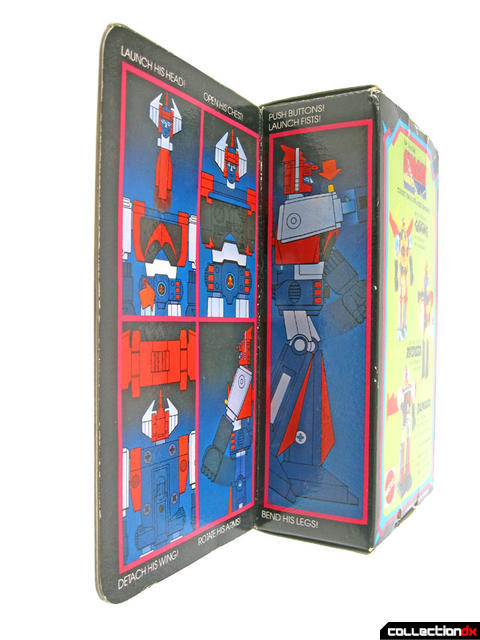 The back of the main part of the box shows the other Two-in-Ones from this wave, Raydeen and Gaiking. The later, final wave would feature Daimos and Voltes V. 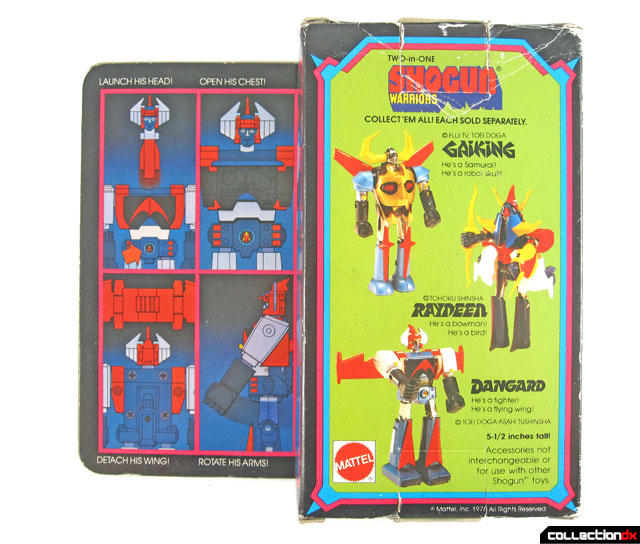 Lastly, an instruction pamphlet is included. I've been collecting toys as an adult for many years now and although I love the toys dearly, somehow seeing these little drawings succeeds in returning me to my childhood even more than the toys do. The same sheet was used for multiple toys, so you can see three Two-in-Ones on one side and three Action Vehicles on the other. 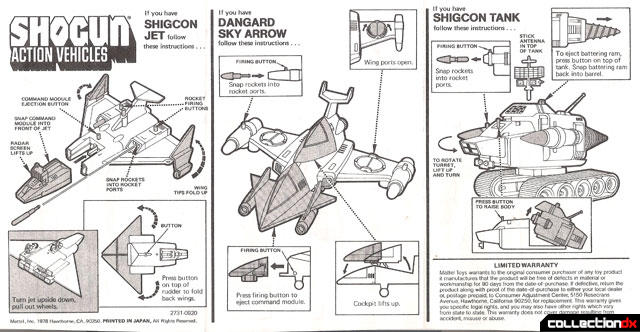 You're absolutely right - as wonderful as the toys are, the instructions (and even the packaging) are just as magical. I used to pore over the catalogs and manuals that came with my toys from that era, especially the few Japanese imports that I was lucky enough to find. Knowing that I was probably never, ever going to see most of those items in person made them even more interesting...

Oh, the random catalog or multi-toy instruction sheet was a window into a mysterious and fascinating world back then. A friend has several figures from this line, including Daimos and Danguard, both of whom I lusted after. But Danguard was the only one that I tracked down many years later (US release). Such a great design.

Two In One??
Hahaha! Dave, you're totally right about the mislabeling, and I never stopped for a second to question the packaging.
The Dangard ST toy is totally not a transformer, but they went and stuffed it into the category by drawing a Sleepy Hollow version Dangard, LOL.

Nice pics and review as usual.