Tekkaman comes from the anime "Space Knight Tekkaman" (aka "Uchuu no Kishi Tekkaman, 宇宙の騎士テッカマン) which aired for 26 episodes from July through December of 1975. Evidently it was a flop on it's initial Japanese run, being canceled only half way through it's planned 52 episode run. However, reports say it did very well here in the United States, though I never even knew it aired here. Must have been in another region of the country. (Source: Wikipedia and Anime News Network)

Kazunori Saito's Encyclopedia Of Jumbo Machinders stated that the Tekkaman Jumbo was released in 1977, but this seems strange to me. Why would Nakajima release a jumbo of a failed character two years after his show was canceled? Seems like a weird thing to do, especially back then, long before retro toy collecting was in vogue. Perhaps the toy came out very early in '77 and combined with the sudden cancellation of the show in late '75, maybe Nakajima was already far enough along in the process that they just decided to go ahead with it regardless. There is nothing on the box to show date of release, and while there is a copyright molded into the back, no date is shown on the toy either. Whatever the case, we would end up with two more Jumbos from this show (this one and his robot, Pegas) so I'm glad they were made. 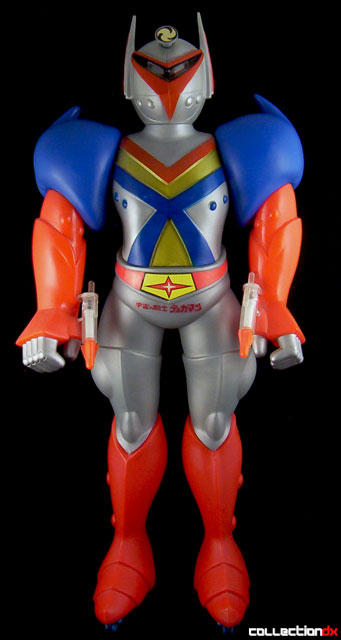 This in another one of those jumbos that collectors are somewhat divided on. It's not a bad toy in it's own way, but it's not a robot character (though it sort of looks like one with that mask on) and the style and proportions are different from the classic Popy style. The large rounded shoulders clash with most other toys of this type. Of course, I like it (hey, have I reviewed a Jumbo yet that I DIDN'T like?!).

Much like Nakajima's previous Jumbo release, Capsule Robo G, Tekkaman comes with a missile launcher attached to each hand. In fact, these are almost the exact same launchers except that the version on Tekkaman has been molded in clear plastic. Also, I'm not sure of the significance of it, but the one on the left hand of my Tekkaman has a little number 5 molded into the outside edge of the button you press to launch the missile. 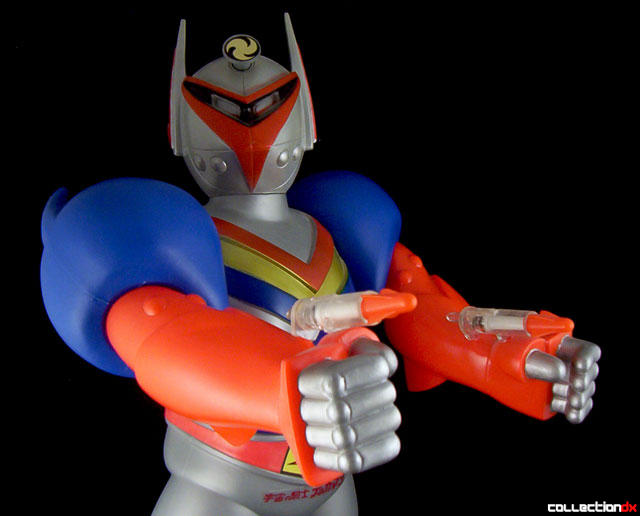 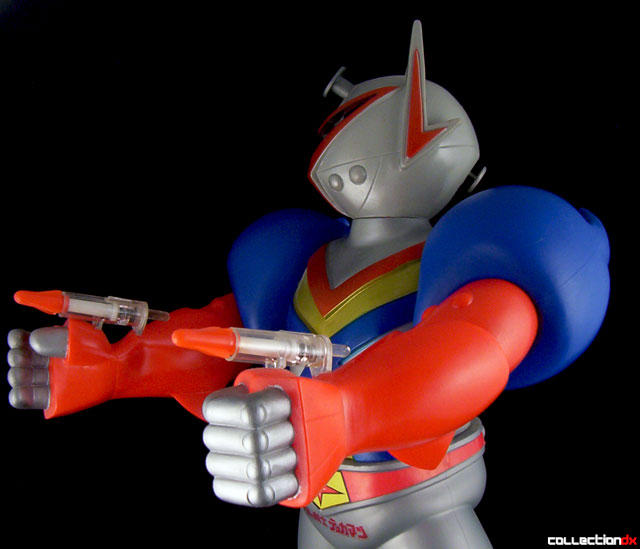 More weaponry is included with the toy in the form of another missile launcher, this time from the very forehead of the toy. This missile appears to have the same shaft as the other Nakajima missiles, only the front has been changed from the typical red, 4-finned nose to a circular disc with a sticker on the front. There is a button on the back of the head that you press to fire this missile.

But that's not all. Tekkaman also comes with a pretty cool and unique weapon that he can hold in either hand, a double sided and extendable spear. The blades on either side of this weapon can be pulled out to increase the size of the weapon. Getting Tekkaman complete isn't really that hard, but this is one of the items that is most often missing from loose specimens. Lastly, you also get two more mini vinyl monsters for Tekkaman to do battle with. 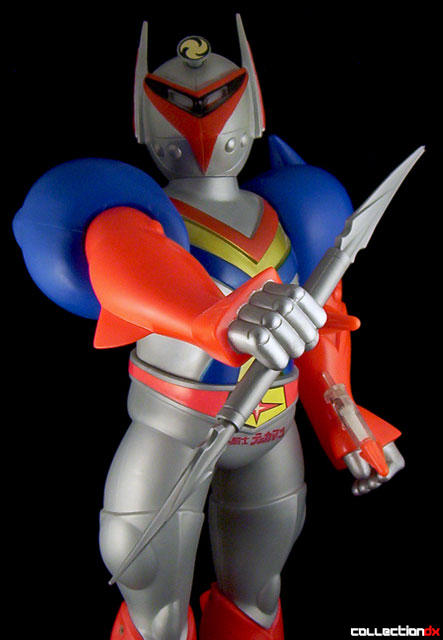 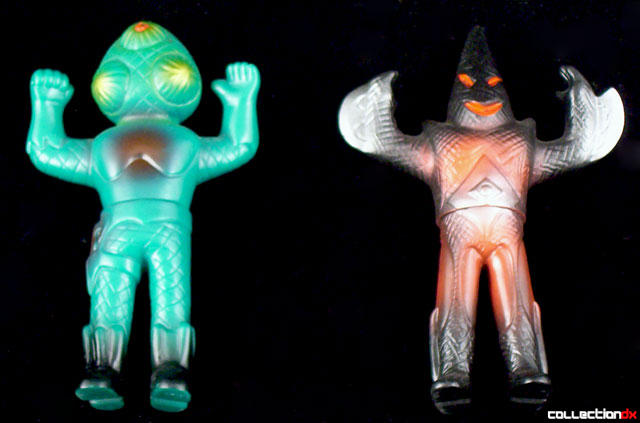 The articulation on the arms of this jumbos is different than most others. You can turn the arms at the seam where the red and blue meets. Since the joint is at an angle, you get a different look than the most straight forward jumbos. He can achieve a pose that is reminiscent of an Old West gun fighter, hands at his sides, waiting to draw. You can also turn the head and waist, and there are wheels on the feet. 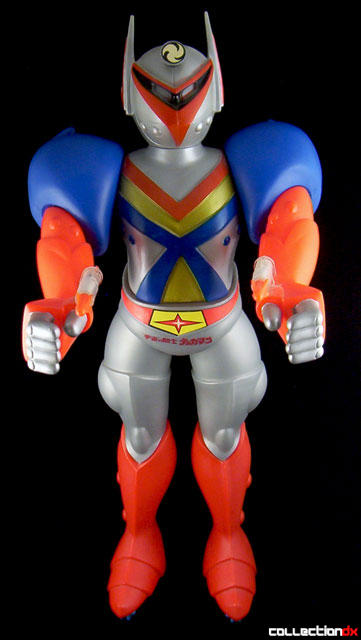 I've also encountered one very minor variation in the Tekkaman specimens I've seen. While the waist sticker on mine is red, I've seen at least one other that was blue. The box image (which is really kind of boring) doesn't show this sticker at all and the red is more uniform throughout the toy. But otherwise, it's the same sculpt as the finished product. And one thing I never really consciously noticed until now is that with the exception of the missiles shooters, everything above the waist on this toy is made of vinyl. On most Jumbos, just the head is vinyl.

The Tekkaman Jumbo isn't for everyone. Unless you are a Jumbo completist or just love the character, I'm guessing you could probably do without it. It might be a bit too funky for most. But I think it makes a great companion piece to Capsule Robo G, even though the characters are not from the same source media. If you do want a Tekkaman Jumbo, it's probably one of the easier ones to get. Maybe I should say "less rare" than most Jumbos instead of easy to get, but they definitely turn up several times a year, in varying conditions. 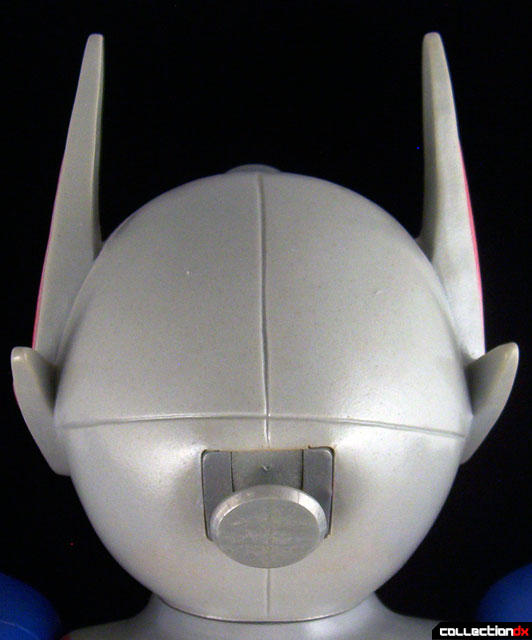 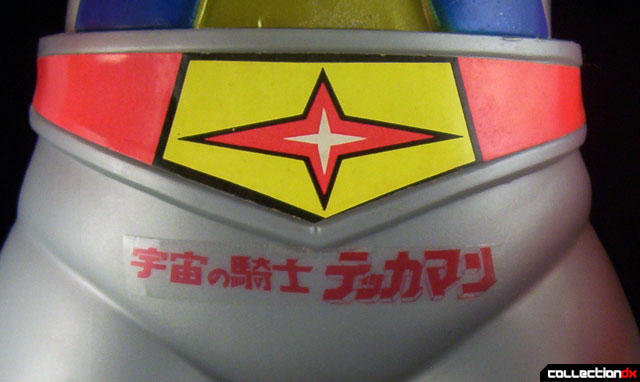 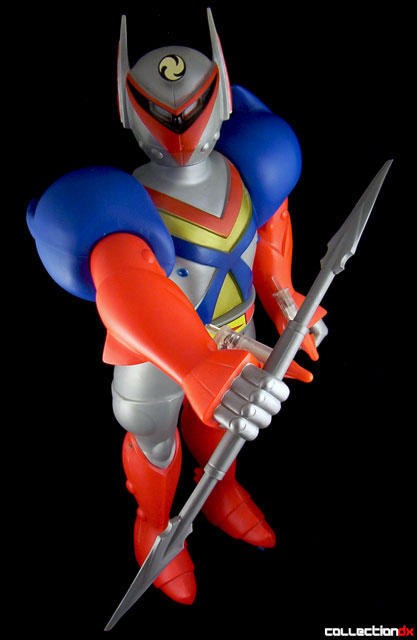 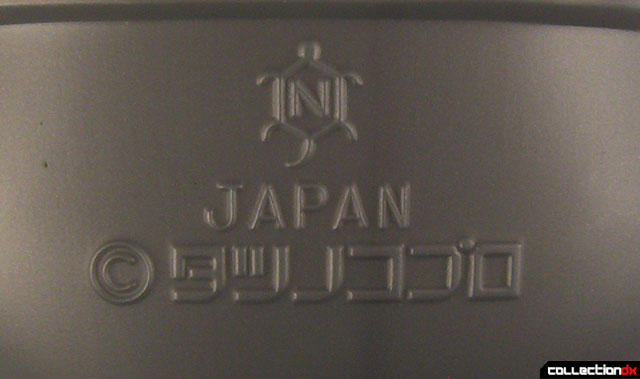 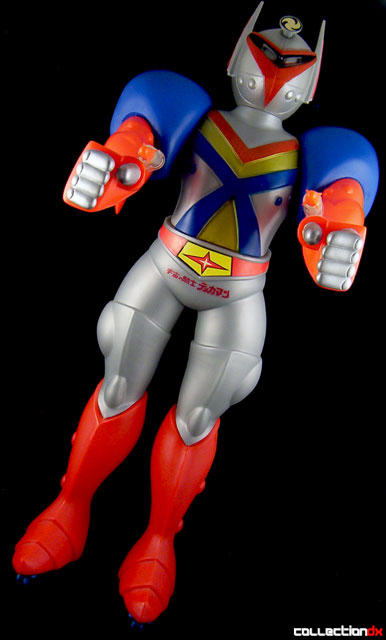 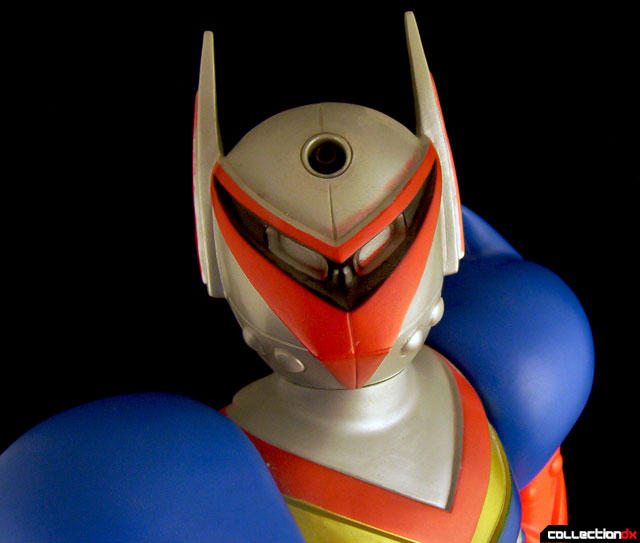 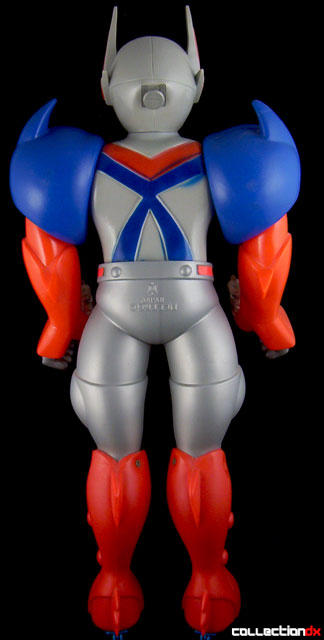 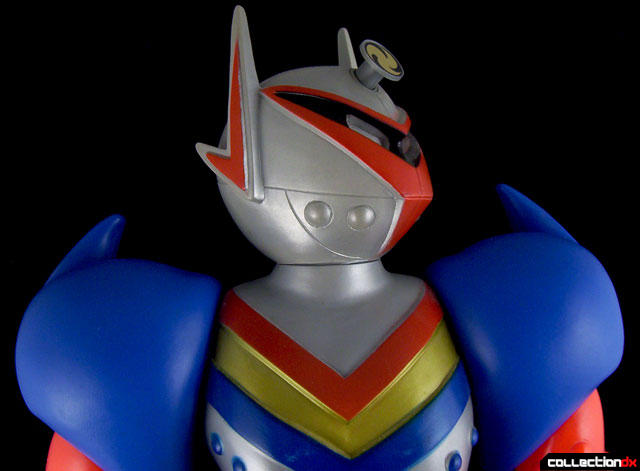 You're too cool Dave!

Tekkaman has always been one of my favorite characters although the US version of the anime's Dub was sooo badly done! So bad it made the show real funny to watch. I picked up my VHS copy as a budget tape at K-Mart all those years ago, although I don't think I have it anymore.

...in any way related to a character of the same name from a later anime series also called "Tekkaman Blade" in the mid-to-late '90s? I only know it because it was dubbed in the US on the then-newly-created UPN TV network as "Teknoman", but failed to finish its American run for whatever reason. Even though I'm certain the dub was simplified for kids, I liked that show!
.
The T-shapped visor is similar between them, as is the double-sided blade weapon and color scheme (white, red, gold/yellow, and green).

Yeah, I have the Jumbo Pegas and planned to get working on a review for it this week. I'll publish it sometime next weekend probably.

Yeah, I guess Tekkaman Blade was a remake of Tekkaman. I never saw either show, though.

My dad rented it (my local video store had all the good stuff) and the dub....good lord was it HILARIOUS. It was mostly unintentionally funny, since Tekkaman....was like Adam West.