Sometimes things must be bought, because if not, nobody would believe you when you told them about it. Such is the case with this Gaiking bootleg.

Lets talk about the card and packaging first. Daiking is sold blister-carded, meaning encased in a vacu-formed plastic bubble that adheres to a card via glue. When this arrived, the glue had dried up, and the bubble was mostly off. The front card art is gaudy, loud and obnoxious - in other words - Awesome. 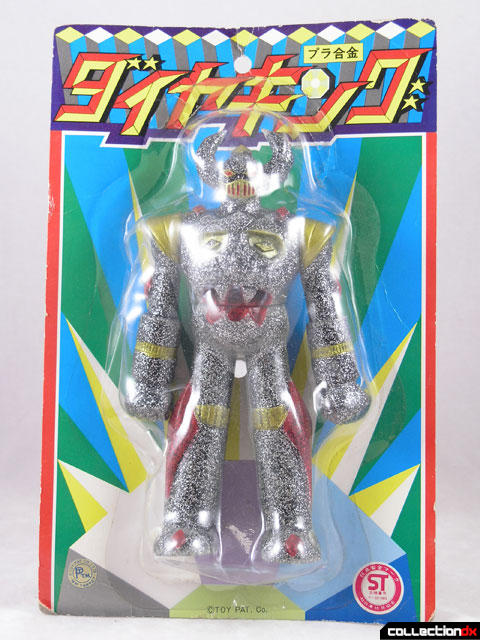 At the top of the card, in a small yellow box is the phrase "Pla-Gokin" (プラ合金). Below that is the character name - Daiking, likely named to avoid the obvious impending lawsuit.

The "Pla" in "Pla gokin" stands for plastic.

The bottom right has the toy safety inspection seal (no idea if it actually got inspected), and on the left, the logo of the Manufacturer, Toy Pat Co.

The back of the card is just black printed on cardboard, with an illustration of Daiking that looks remarkably inspired by the Shogun Warriors version of the Gaiking Jumbo. 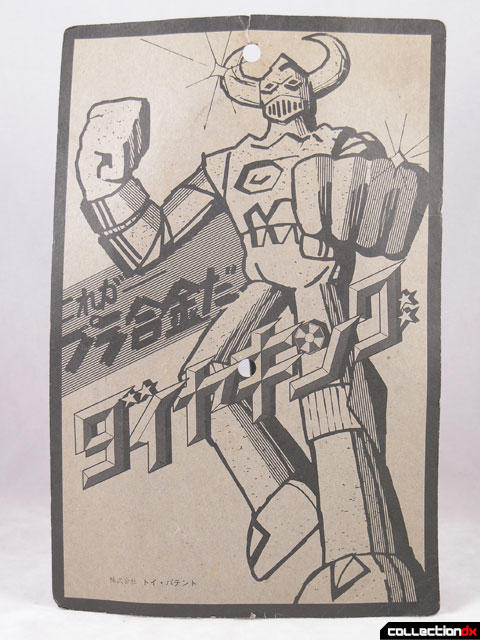 The toy itself is a hideous monstrosity, but I can't help stare at it and marvel at its weirdness. It looks like Gaiking, but it doesn't. It's as if they made the toy based on a drawing by a Japanese 6 year old, without ever actually knowing what Gaiking really looked like. 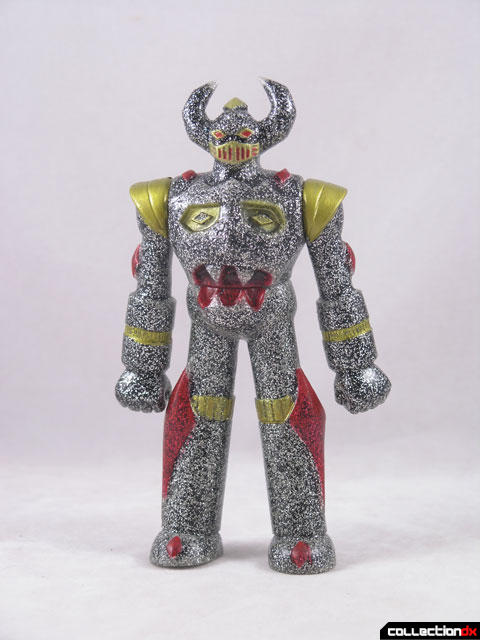 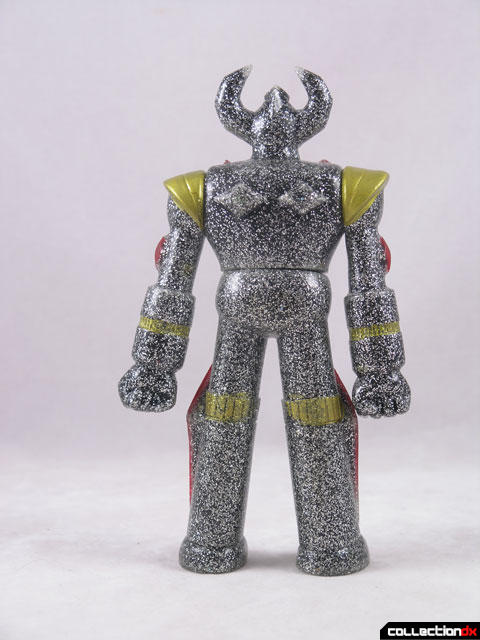 The material is a smoky clear vinyl infused with large metallic flakes. I guess that's the gokin in Pla-Gokin. The vinyl is thick, smelly, with a slightly sticky texture. 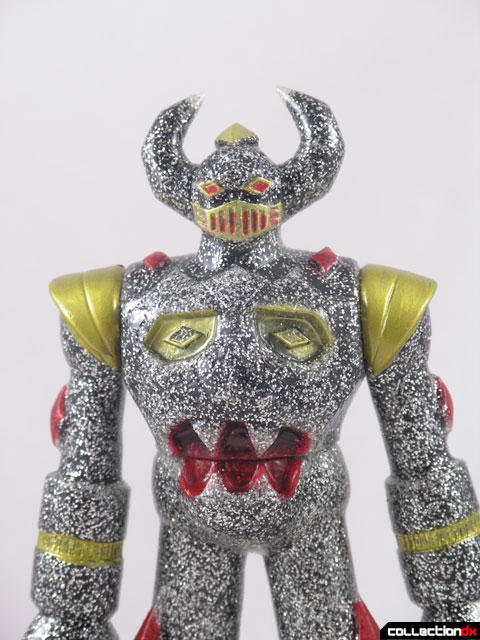 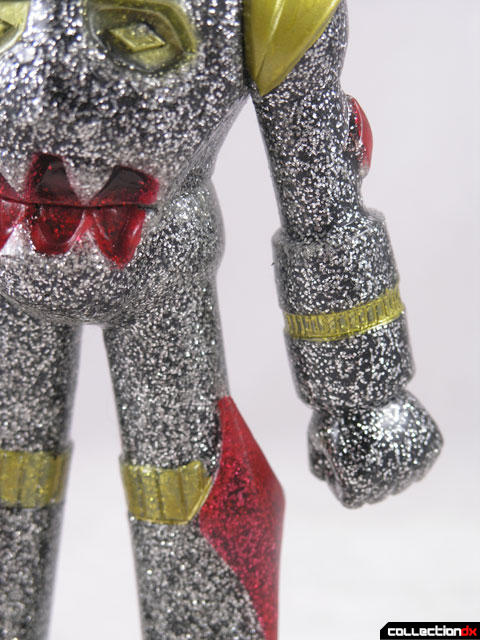 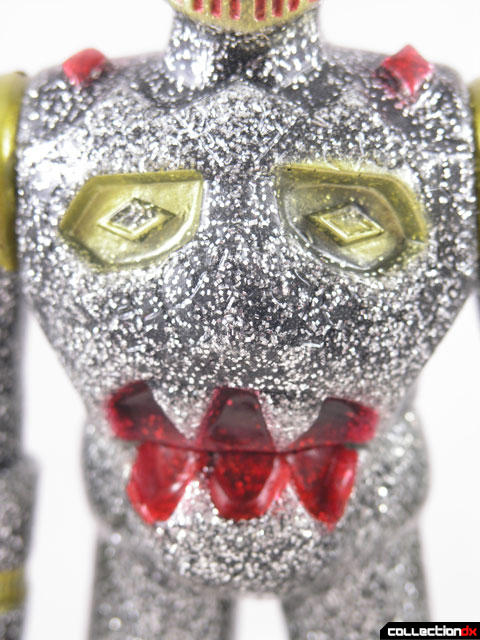 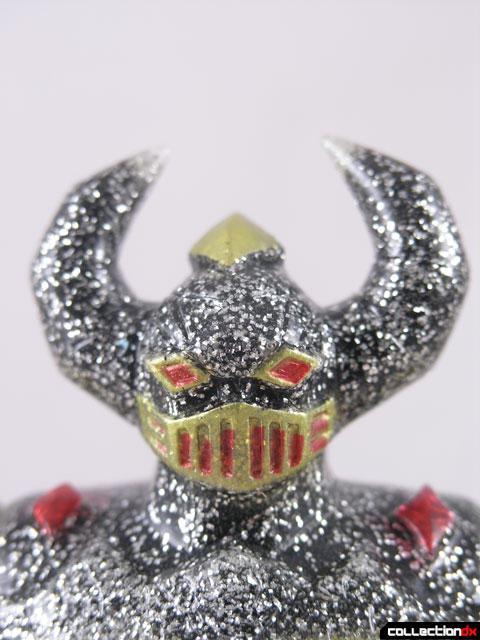 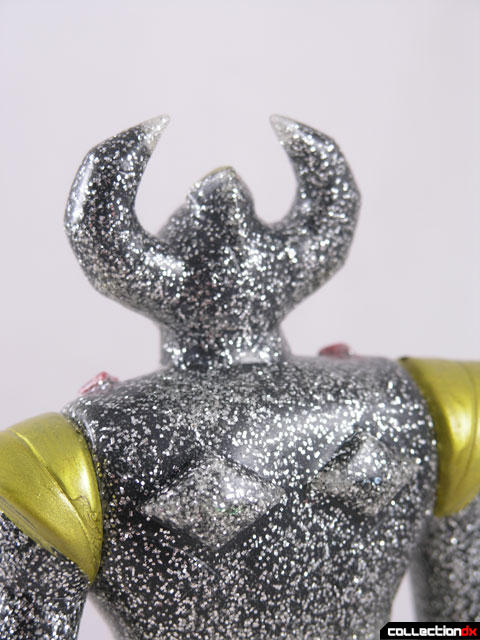 Articulation is kind of a moot point with this, but it has the standard arms and waist movement. The toy stands about 6 inches tall. 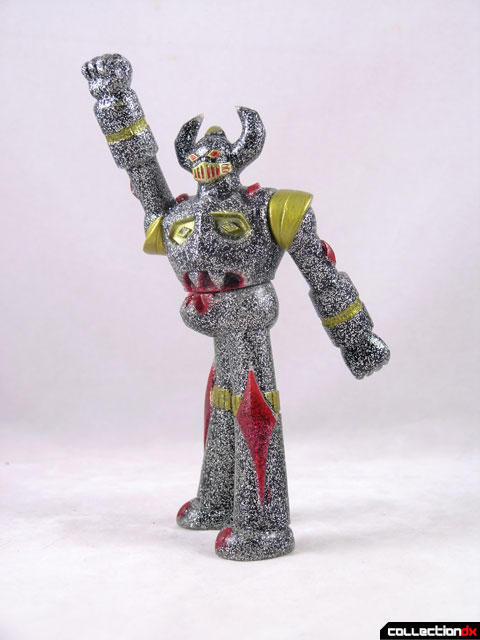 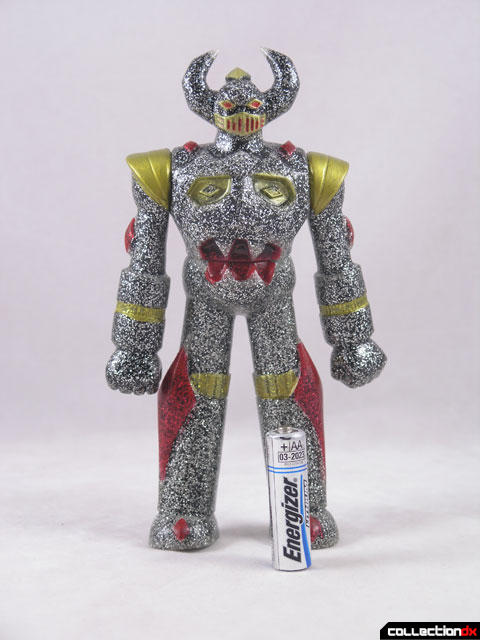 Really, it's another obscure funky oddity in the world of Japanese toys. I love the almost folk-art take on one of the most iconic super robots. I am also intrigued about the fact that this appears to be a bootleg made by the Japanese for the Japanese market - something of a rarity. You almost never see these for sale. When they do come up, expect them to sell for a few hundred dollars. 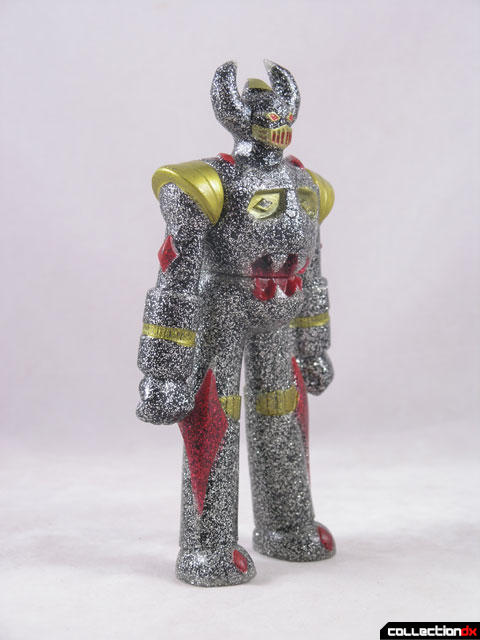 9 comments posted
Oh my god, it's amazing! I

Oh my god, it's amazing! I looooooove the silver flecks in the vinyl, and the wonky chest/face rendition. Very cool and scary bootleg.

oh god. I think I need to take a shower. This looks like an eastern bloc dog toy. Needless to say, I love it, although you've ruined its value by removing it from the packaging. At least it has a waist joint.

Josh didn't ruin this toy's value. It ruined his.

Needless to say, I love this thing.

dude, I don't mean to offend anyone here, but that thing is tits.

Does not exist.
You're a big liar, liar, liar.
You made this out of playdoh, and your daughters BRATZ playset toy glitter.
Fess up.
I don't even need to consider looking, and paying for one of these.
Hah.

It's as though the maniacally happy head is mocking the sad, sad torso.

Well, I don't even know if it matters, but technically its name is Daiyaking. Love the head sculpt.

It looks like some voodoo fetish doll. Maybe if you poke it with a needle the real Gaiking feels it?

It also looks like it was carved from asphalt.

this is stuff I dream of finding.. crazy figures that my wife would smack me for buying. crazy cracked out bootleg stuff that even my dog would ignore. Bootlegs are awesome on so many levels.

I mean some guy walked into a board room and presented his idea for this toy and all these suits looked at each other and said "Great work Johnson, lets do it!" and high fived each other. They is probably a crazier explanation of its history though