It's as if Timothy Leary had a flying space fortress....

Kageboshi (カゲボーシー) is a flying fortress from the obscure 70s Tokusatsu show "The Kagestar" (ザ・カゲスター). Kagestar aired from 1976-1977 on NET. The show ran for 34 episodes and was co-produced by NET and Toei.

Supposedly, the show has something to do with people merging with their shadows to become superheroes, but honestly, I have no idea, and I think I am better off not knowing. Why does the main character look like an American flag exploded on him? What's with the eyes on the helmets? 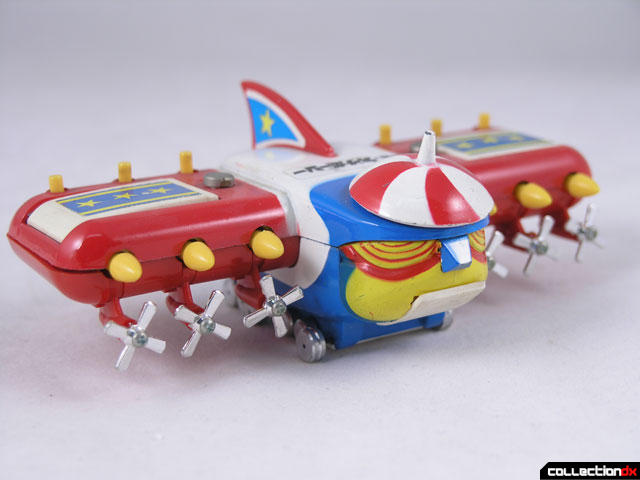 The Kageboshi Popynica is just one of those WTF toys that I love just because it is so out there. Out of context, it makes no sense, and stands as a classic example of Japanese toy design of the time. Its this aesthetic that makes my pants shrink.

Being a Popynica toy, the Kageboshi comes in the standard popy box, with the silver border and chogokin logo. Sharper viewers will notice that the toy on the package bears little resemblance to the toy inside, which was often the case with Popy toys. Here the image is obviously of the Kageboshi in the prototype stage, with red missiles and different decals. The toy is wrapped in foam padding, and not cardboard or styrofoam like other chogokin. 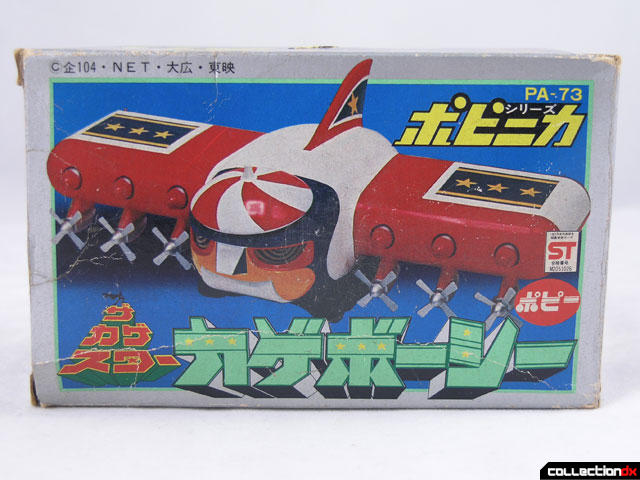 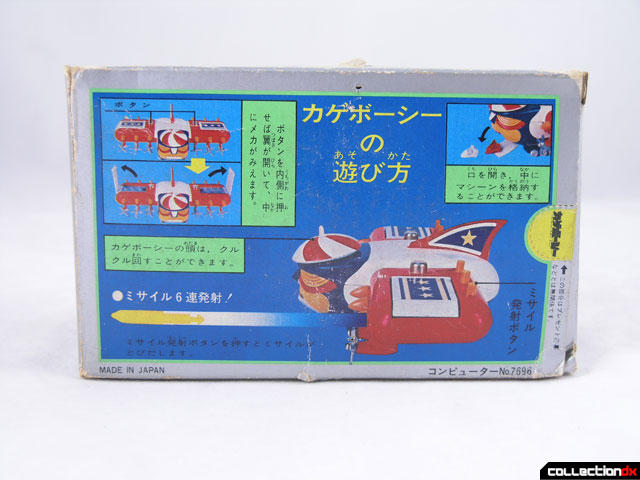 The body of Kageboshi is almost entirely diecast. The whole chassis can roll along the ground on shiny metal wheels. 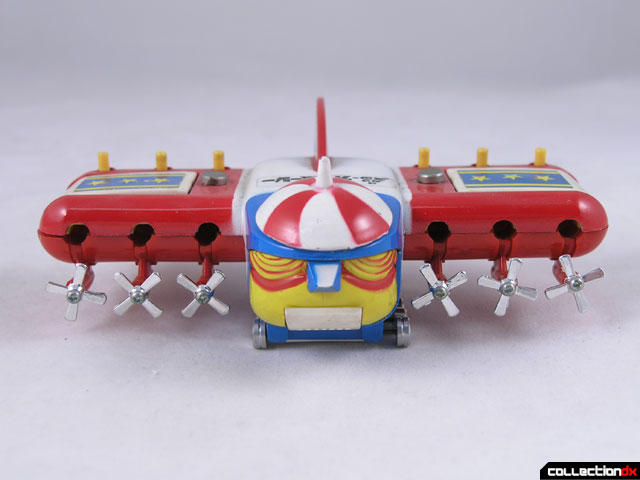 The "hat" can rotate, as can each individual propeller.

Six missiles can be loaded into Kageboshi and shot individually. Unfortunately, age has taken its toll and the missiles don't really launch as they get caught on the springs and need to be pulled out. Not sure if this is just a problem with my sample or with all of them. 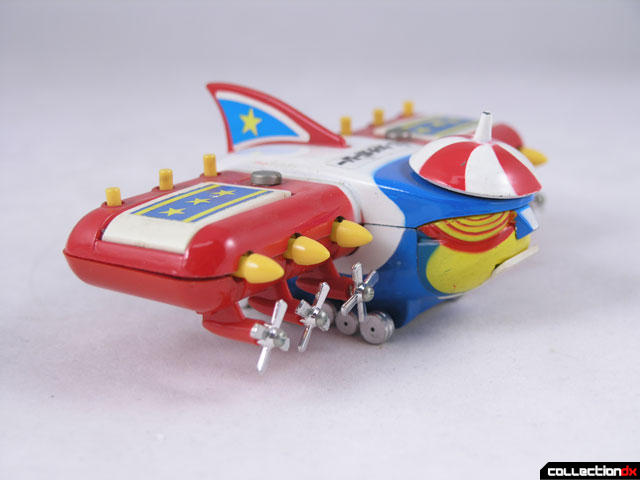 In addition the two large panels on the top of the wings are spring loaded and can be opened by sliding the silver buttons toward the center of the vehicle. Inside is spectacular chrome detailing. 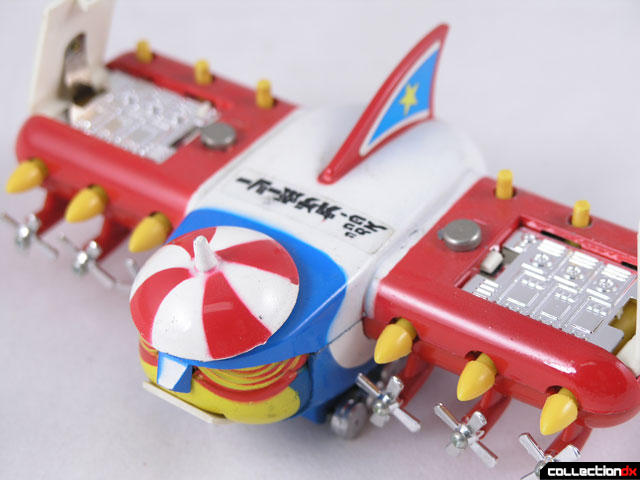 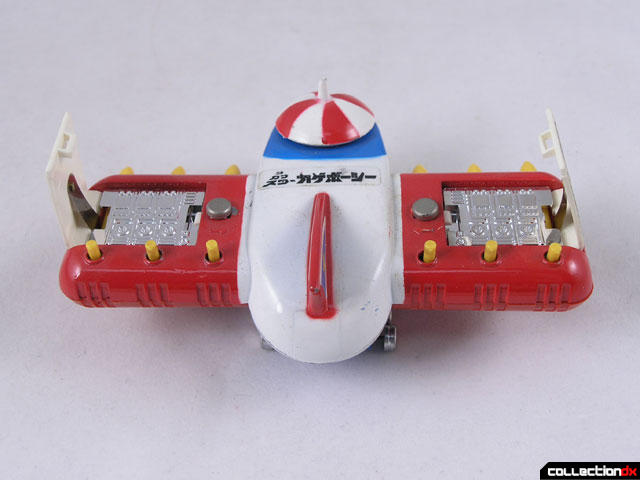 The "mouth" of Kageboshi can open and you can store miniature vehicles in there. Included are Kagestar's "KageroCar" and "BelleCar". 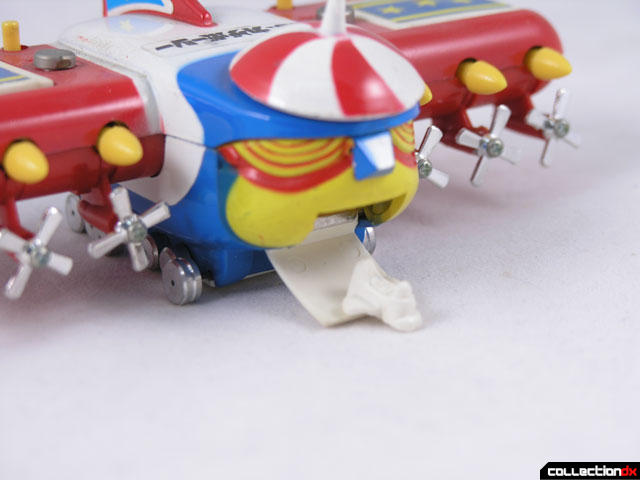 I don't know what it is about Kageboshi, but this little guy is always for sale reasonably cheap. There's always one in Mandarake, and it never goes for more than 5,000 yen, but I have no idea why. Overstock? Unpopular show? Who knows?

Kageboshi has the funk, and you need the funk.

IIRC I remember reading (probably on TBDX) that Kagestar had pupils to give him familiarity among children. IMO the pupils make him look creepy.

I also remember reading that the actor that played him was arrested for murder. Anyone want to confirm that?

He killed two little kids from what I read about the guy. He was a sicko... very tragic. But that's not what we're here for this toy is cool and strange too.

I'm enjoying all of the obscure Popynica. Keep it coming!

Ya know what? I agree. I can almost- almost- see myself getting one of these from before my 'tweens.

I'm watching the show on youtube (Toei has put a bunch of old toku and anime on their official youtube page with English language subtitles). It's as crazy bonkers as the designs lead you to believe.