According to Saito, the venerable Jumbo Machinder came out in 1975 as well, and if you check out Nekrodave's review of Raideen, Getter Dragun, Getter Liger, and Getter Poseidon, you'll quickly see the stylistic similarities not only among the toys themselves, but also the packaging design, inserts, etc. 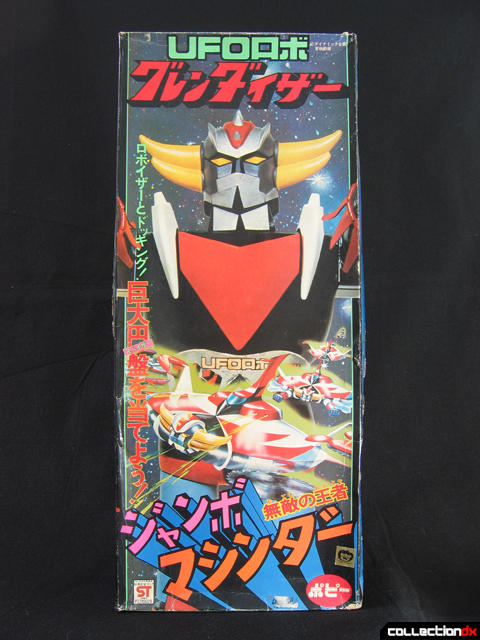 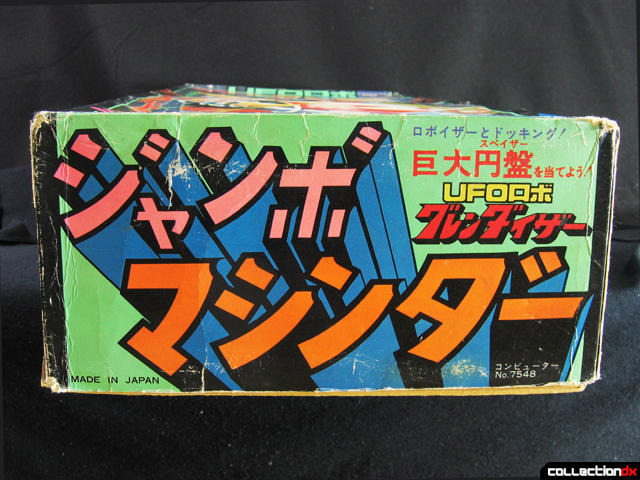 It really seems like the popularity of this guy's through the roof these days. Then again, if you look at the Jumbo Machinder market, it looks like prices are up all across the board. Thing is, Grendizer's not even that rare! Sure, complete/boxed examples aren't falling out of the sky, but they do show up on Y!J several times a year. The version I'm reviewing today is the more common Japanese version with the unfilled-in "UFO" on his belly sticker. There's a much more rare version with these letters filled in blue. That little variation will add at least $500 to the pricetag! 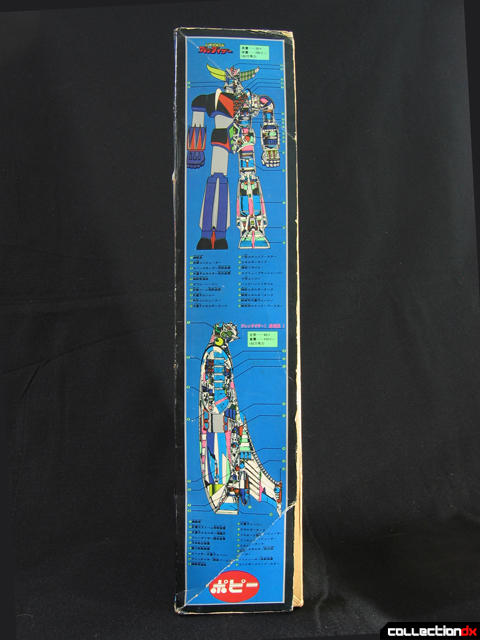 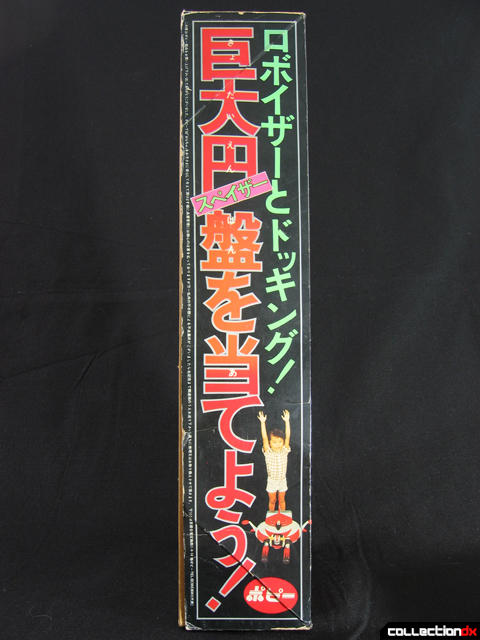 Of course, if you're looking for a cheaper 2-foot vintage Grendizer fix, you could always go with the Mattel Shogun Warriors version. I don't have one to compare in this review, but stay tuned. You may just see full coverage of the Shogun very soon from Nekrodave. Either way, I'm guessing the Mattel version is far easier to track down. 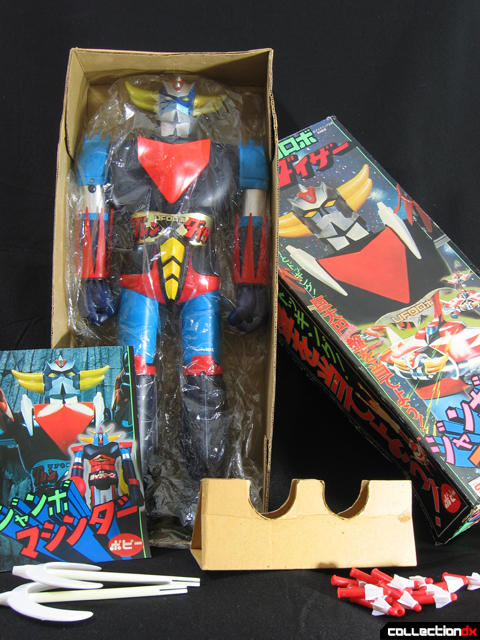 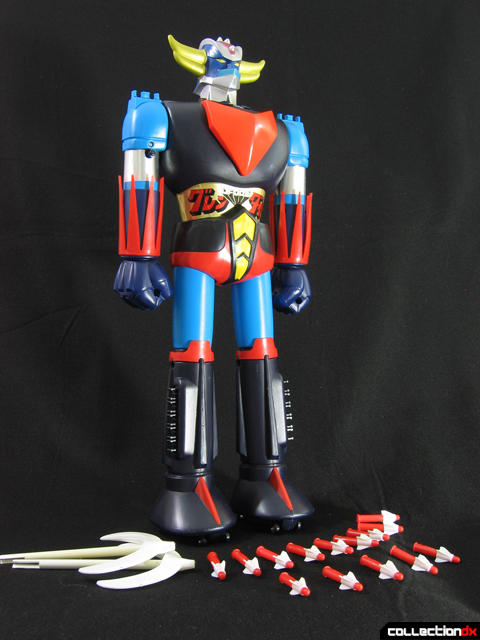 Grendizer comes in the typical colorful two-part cardboard box from Popy. He also has the early Jumbo Machinder catalog, 14 standard Jumbo missiles, and the two Shoulder Boomerangs, that can combine into his signature Double Hariken (Hurricane) weapon. Also, though this is more of a feature than an accessory, his right fist launches off in classic super robot fashion...though the red blades on the forearms obviously don't swing forward into a proper Screw Crusher Punch! This gimmick was replaced in the Shogun version with the three-missile-launching fist. I prefer the cartoon-accurate look of the Popy right fist, but at least you still get a sweet shooty gimmick with the Shogun. 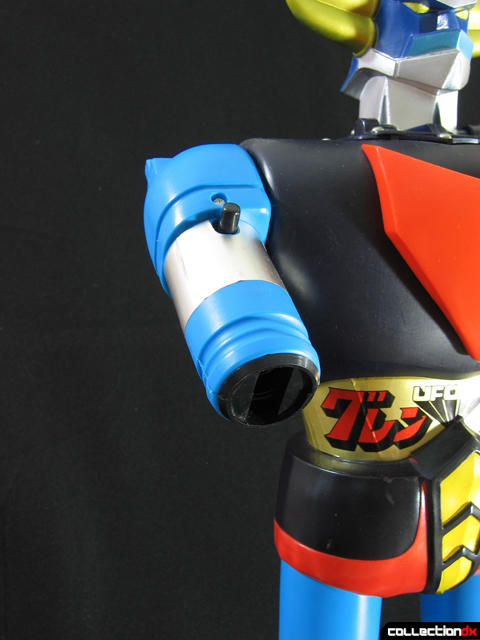 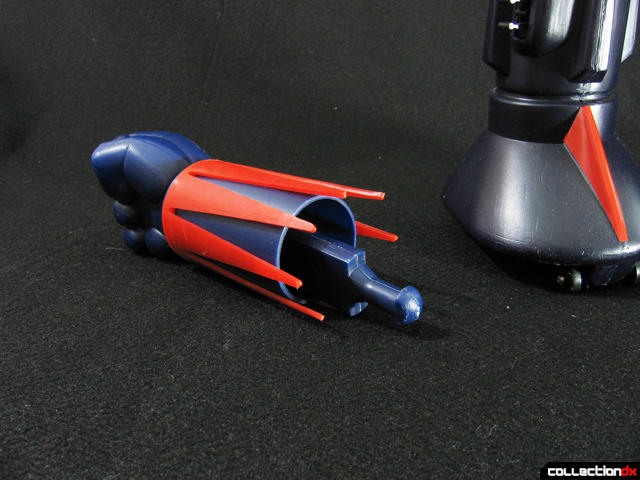 Yup, he's got wheels on the bottom of his feet and he boasts a whopping four points of articulation! You certainly have the shoulders, but you can also rotate the forearms at the elbow. Anyway, one thing that honestly annoys me a little about this toy is the missiles. I mean, sure, they're classic and they give it that iconic "Jumbo Machinder" look...but there's no way to fire them! At least the Shogun version comes with the missile hand that can make use of these things! Eh well. 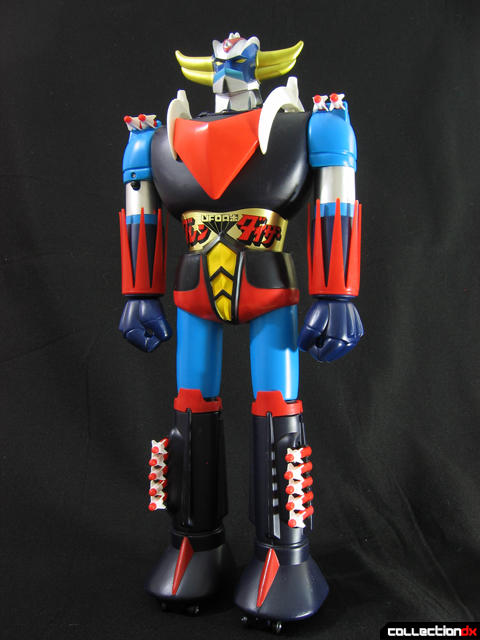 My favorite gimmick, however, is the Double Hariken (or "Double Sickle" in the Force Five English dub). The Shoulder Boomerangs slide up, out of the chest, and have matching prongs at the ends that slot together to form the continuous staff. It's sorta hard to tell from these pics, but the plastic handles have actually yellowed a little over the years. From what I've heard from others who have this toy, it's not from sunlight as much as just time and...air...messing with that type of material. 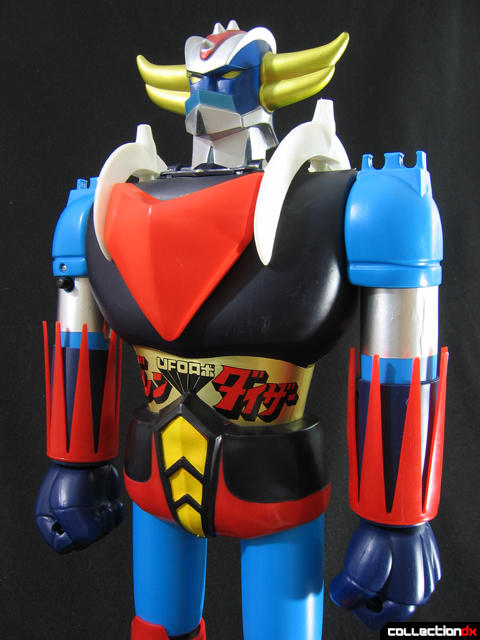 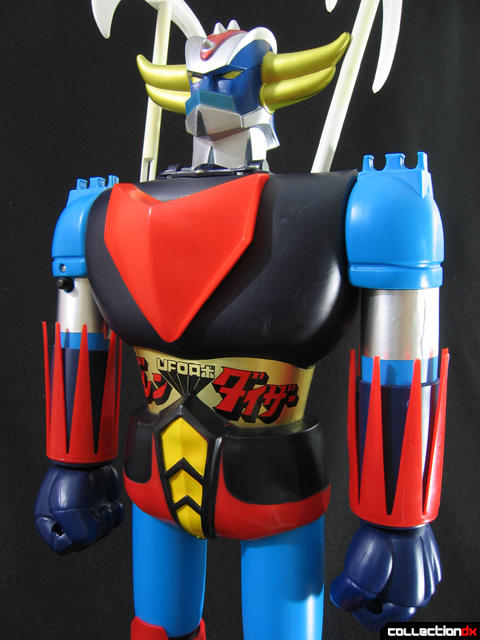 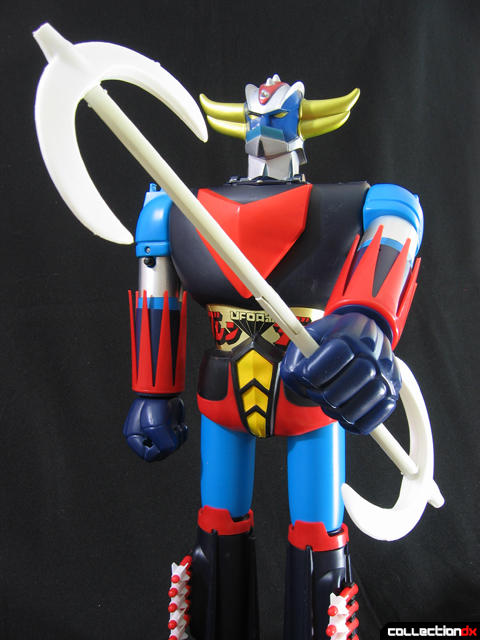 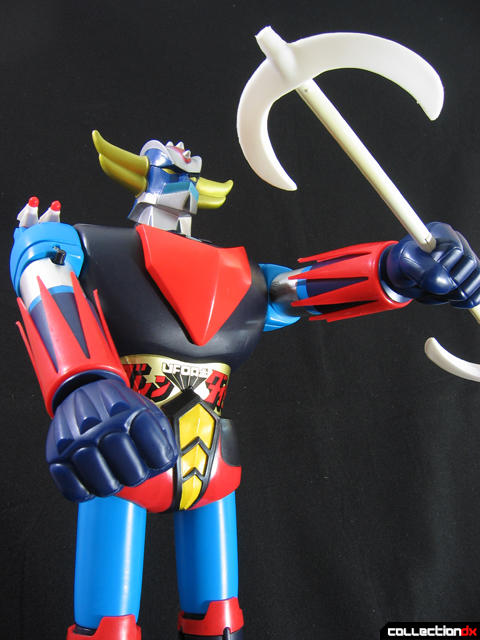 That's just a badass melee weapon for a super robot. I was never all that fond of super robots carrying swords. Always seems sorta unimaginative. The Double Hariken, on the other hand, was so much cooler in the cartoon, and the way Popy reproduced it so faithfully blows my mind.

As for the rest of the figure, it's a colorful, blow-molded polyethylene, 2-foot tower of awesome. The lines are slick. The colors pop. The proportions are killer. The heft is just right. But you don't really need me to tell you all that... 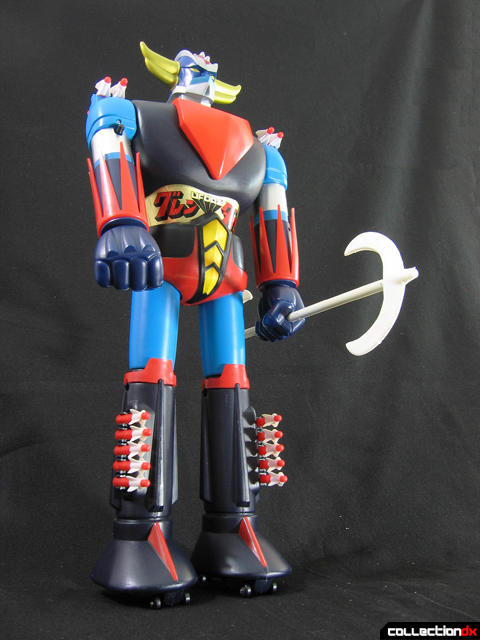 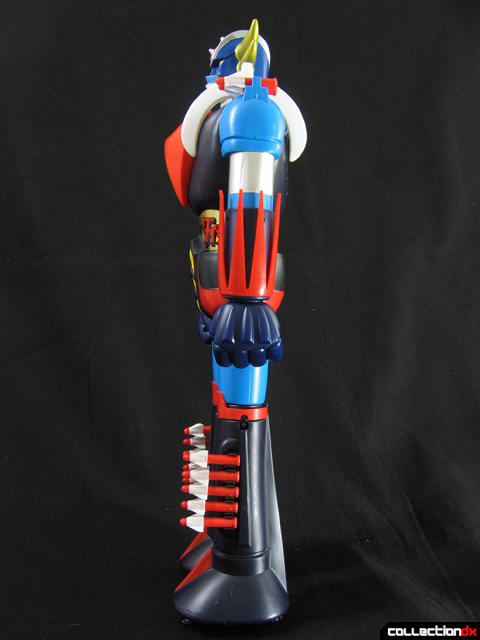 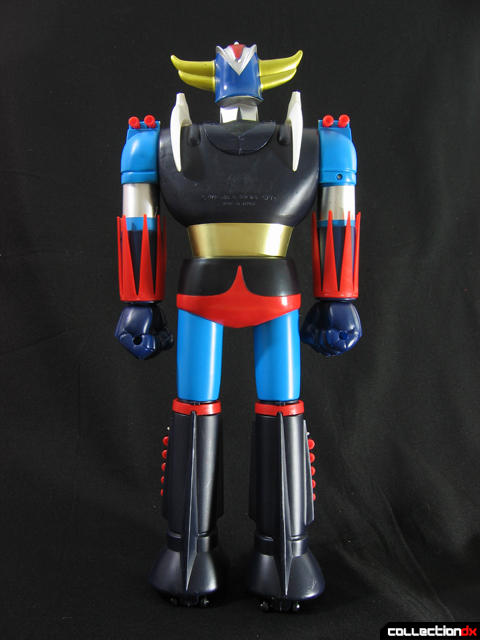 Oh, one last thing of note: I lied earlier. There are actually five points of articulation... 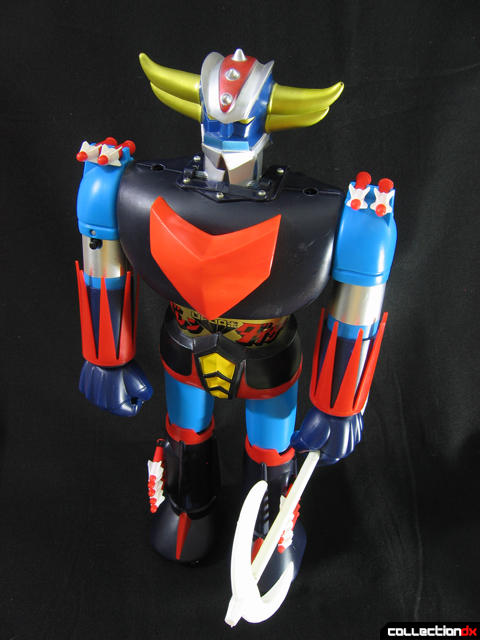 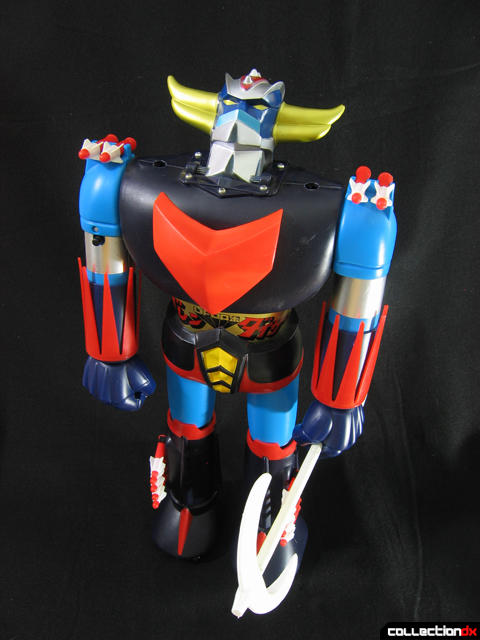 More on that later...

Now, folks, I kept the review above very academic in keeping with the format Nekrodave has established with his beastly coverage of these giants of the toy world. I normally throw in a lot more personal stuff about why I, personally, have an attachment to the character or toy.

Well, those who know me are fully aware that I'm a huge Grendizer fan. In fact, check out my Daigokin Grendizer review for more about me and Grendizer, as well as more Grendy toy fun.

your Grendy is beautiful man. Cheers to you, congrats.

We all know that Popy Grendizer's neck bends that way to more effectively beg for scraps at the dinner table.

If it's that big, maybe you'll need handles.
Or a place for a tiny one to take a load off his feet ;)

I know what's coming. And you can sit on it.

Maybe it will have wheels too.

I mean if it's big,
and you *can* sit on it,
then you'll *need* handles to carry it.
Do you think there's room for a Duke Fleed Pilot sticker on something big? That would be cool. ;)

First off, congratulations Sanjeev for this excellent review of the King of all robots. "It really seems like the popularity of this guy's through the roof these days." - well to be honest Grendizer has always been the number 1 super robot here in Europe particularly France, Italy and Malta since it was the first anime to be broadcast on French and Italian TV stations. Furthermore, I don't know what happened to the cartoon industry but recently kids are getting a load of rubbish (sorry)! Grendizer was ultra cool as both the storyline as well as the artwork were of very high quality considering they were produced 30+ years ago. High Dream seem to have understood this as they are releasing various toys and figures from this great anime. No wonder UFO ROBOT GRENDIZER is the uchu no ocha - THE KING OF SPACE.

Since that french company did a well-marketed bootleg UFO GRENDIZER DVD set a few years back (and the big 6million euro lawsuit that followed), and the SOC GX-04 Grendizer set, there has been a renewed interest in Grendizer over the past decade.

You also need to keep in mind about the speculator market; Grendy toys have historically been a bit tough to get a hold of, or very expensive. The Grendizer Machinder shown here is a big deal to all Jumbo Machinder fans as well. Add the specific popularity of the character in Italy and France, and this bumps up the price and demand for any and all Grendy stuff.

I sold all of my grendy collection on ebay over the last few years and without fail, they all go to Italy, and for at least double the original price I paid for them.

This is really beautiful. I just wish Unifive had reissued Grendizer along with Mazinger Z and Great Mazinger!

But then again, we can always pine for other clutch reissues, like Danguard Ace, Voltes V, really any of the Robot Factory dudes...Daikumaryu(!!)...

Gah, I forgot about that... maybe when I'm older (and rich) that'll be my 4-figure toy.

Dang, I have this exact jumbo, still in the box (though box is a bit weathered), but with all the missiles, both the sickles, and all the inserts / marketing material that came in the box. I also have the ZZ-3, ZZ-4, and XX-9 accessory arms.

Anyone have an idea of what this jumbo sells for these days?

I just checked and mine does not have the apparently very rare 'blue' ufo sticker though....

I need to take some time to take photos of all my japanese toys. I lived in Okinawa from 1974-1978 and was totally hooked on these toys and the TV shows. I have two other jumbos as well, plus a bunch of the smaller metal versions. I even have a couple of 78 records with the theme songs from the tv shows, still in the original packaging. Damn those were some good times.