Portions of this review are taken from my Super7 article about Raideen.

I can trace the obsession back to Christmas of 1978. I had discovered comic books, and my favorite was the Marvel Shogun Warriors comic. I had begged my parents all year long for a Shogun Warriors toy. I didn't care which one; I just had to have one. On Christmas morning my wish was granted. I tore open the wrapping paper to find my very first giant robot: Raideen. It was the Raideen Jumbo Shogun Warrior. It was the third version, but I wouldn't know that until years later. My dad instantly took it out of my hands and cut off the sharp point of the shield with toenail clippers. I was five years old, and the only kid I knew with a Shogun Warrior. I ruled the neighborhood with a shooting fist.

Years went by, and Raideen got burnt, painted, buried and eventually lost. As a teen, I ignored my toys and all but forgot about him. After college, I began to get into toys again, and once I got online I decided to look for my favorite childhood toy again. I discovered Alen Yen's ToyboxDX, and through them, eBay. It was all downhill from there.

Raideen's original name was Brave Raideen, or Yuusha Raideen. The Japanese TV show aired from April 4, 1975 to March 26, 1976, and ran for 50 episodes. Produced by Sunrise, Brave Raideen told the story of Akira Hibiki, who pilots the giant robot to fight against the Devil Empire. Akira would ride his "Supercar"motorcycle off of a cliff and yell "fade in!'" as he entered the dormant Raideen.

Yoshiyuki Tomino, the creator of Mobile Suit Gundam, directed the first 26 episodes of the show. He quit and was replaced with Tadao Nagahama, who also directed Combattler V and Voltes V. The mechanical design of Raideen was done by Yoshikazu Yasuhiko and Suzuki Yoshitake. Originally, Raideen was intended to be green, but Mr. Yasuhiko changed his mind about this. The show was also the first to incorporate mystical or supernatural elements into the super robot genre.

Popy produced the very first Raideen toys. Raideen was the ninth toy in the Popy GA series of die-cast robot toys, known as Chogokin. It has a place in history as being the first Popy toy with the DX label, and the GA-09 is commonly regarded as the first transforming die-cast robot.

The GA-09 Raideen is a work of art. In robot mode, it features firing fists and weapons that attach to the arms. Transformation to Godbird is simple - close the face plates, fold the wings back over the arms, fold down the shoulder pads, bend the legs at the knees and move up, and finally swing the landing gear out from the back. Simple and beautiful.

The story of the Popy GA-09 is a complicated one. The first version (shown) of the GA-09 came with white legs with chrome stickes on the arm. later versions would have no stickers, and chrome legs. The GA-09 was reissued in the "Etarnal Heroes" (yes, that's how they spelled it) series, and again in the mid-80s in a blue and white box. Raideen was also released in 1978 as part of the Shogun Warriors "2-in-1" line by Mattel.

Popy also issued an extremely limited black version of the GA-09, officially known as Super Metal Black GA-09, which has become very expensive over the years. It came out three years after the original and was sold in limited quantities and intended for older fans. It is not known where the idea of the black version came from, as it does not appear anywhere in the show. The Super Metal Black GA-09 was the very first black version toy, starting a trend that continues to this day. In the mid-1990's, there was also a re-release of the Black Raideen, along with a Black ST Combattler and Black ST Godsigma. Unlike the original, this black version has no gold trim. Rumor has it that these were made by the molding company without Bandai's consent. The boxes have no markings, and the toys are less detailed then the originals, due to the degradation of the molds over time.

In 1999, Bandai released the GA-09R, a re-tooling of the original Popy toy. Over an inch taller, the reissue featured an entirely new sculpt and paint job. Some of the notable differences are red wings instead of white, and metallic gold horns instead of yellow. Although it looks similar to the original, it is an entirely different toy. Bandai also created a limited gold version of this toy, available only at the Tokyo Toy Festival in February 2000. Only 1000 were made, and they were completely sold out. 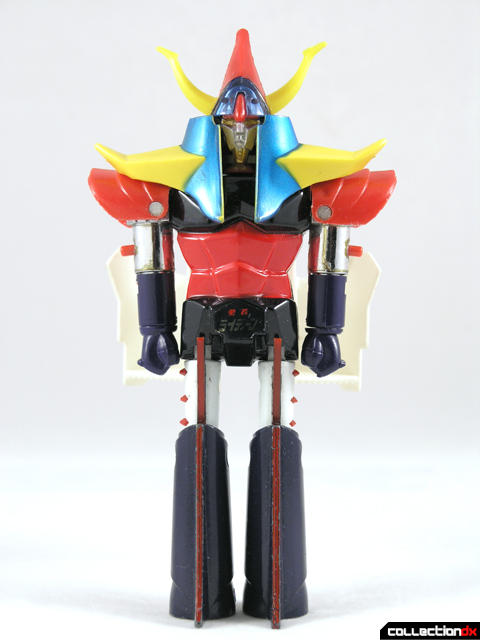 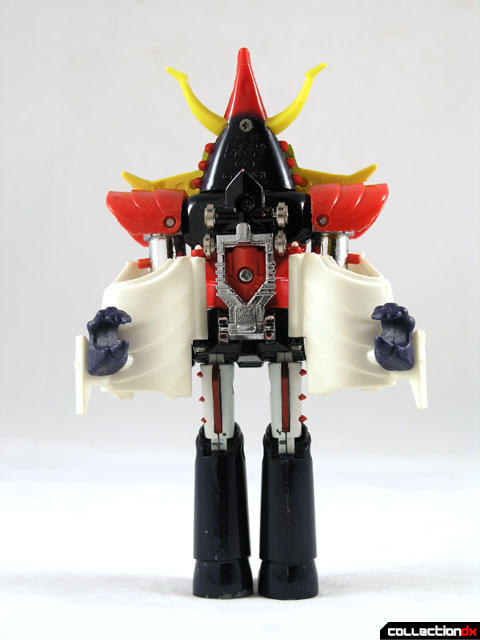 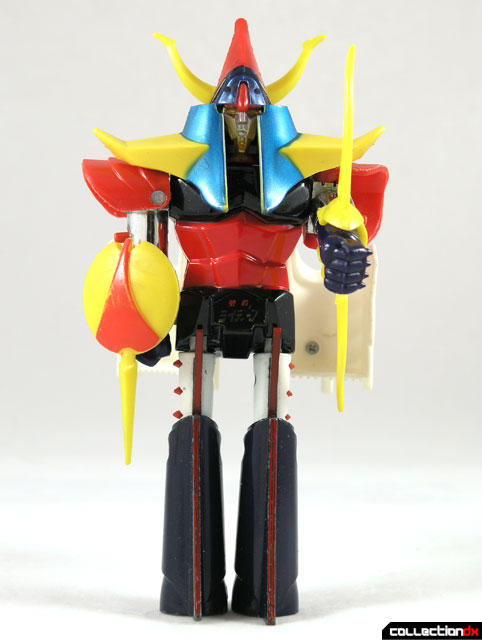 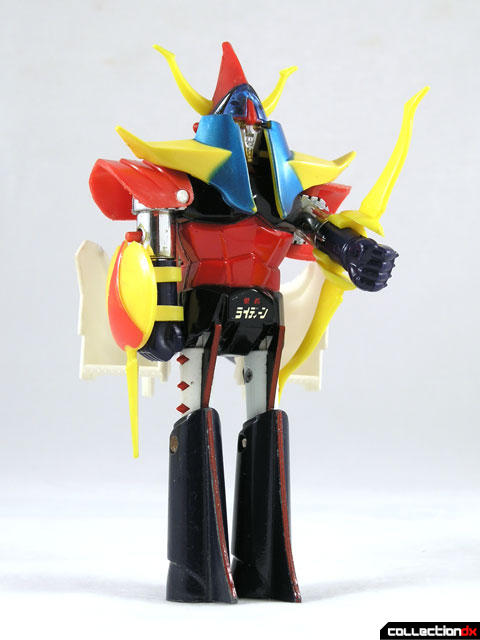 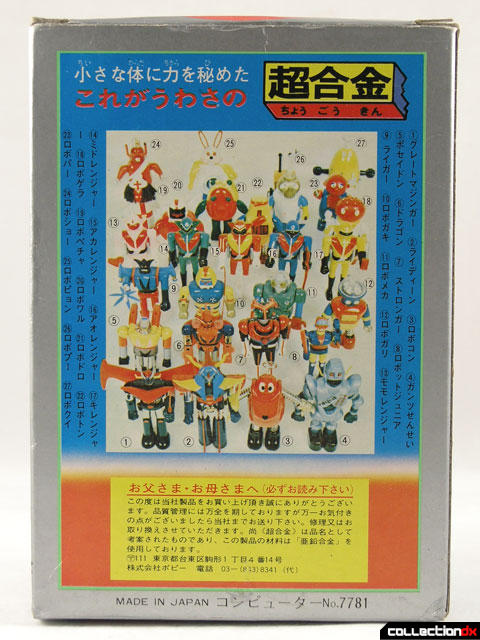 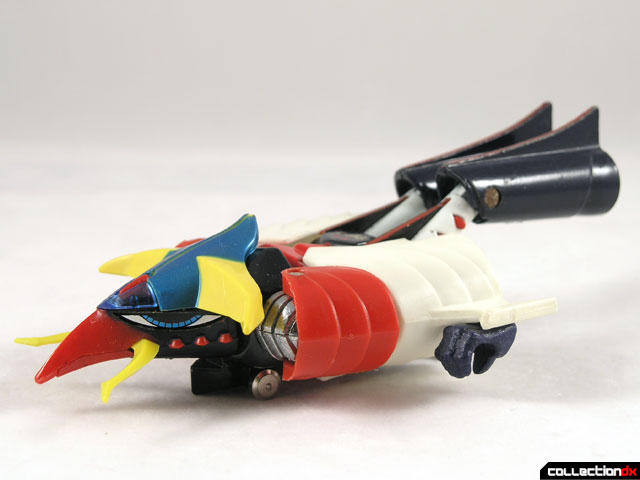 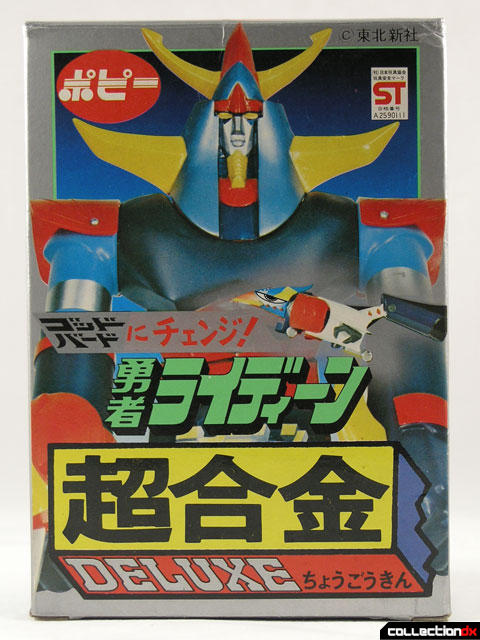 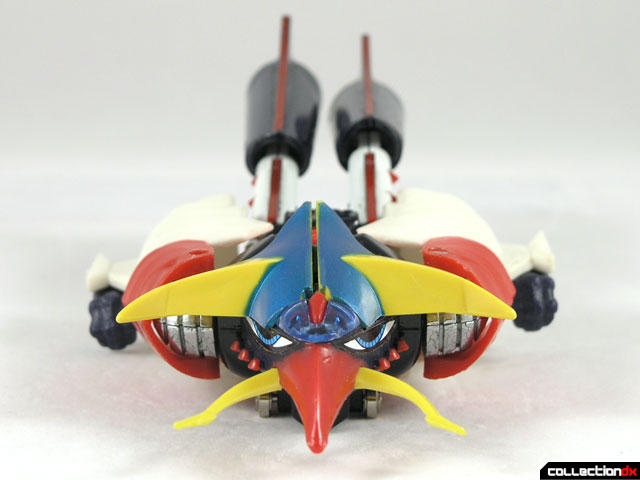 So glad you guys have these old reviews archived. So useful for double checking details, like the 2nd version box. Great to have this in addition to the books and other datafiles out there.
Just picked up a 2nd version Raideen, and so easy to compare features with write ups like these.
I'm curious if all 1st versions of GA-09 had green squeaky foam color like other early GA series gokins. The second has white foam.
And seems only later did the actual number of "GA-09" appear on the boxes, yet the one English word of "DELUXE" was very prominent.

Thanks again. Keep it up!
And other users, post up, and let it be known when you get to make use of these older reviews.

It could be great if this review offered more details on the toy and more pictures. :)

Josh, would it be cool with you if I used a couple of your images from this toy for a video on Raideen? I'd also want to use one from the GA-01 reissue as well. (http://www.collectiondx.com/toy_review/1999/mazinger_z_reissue)

As long as we get credit it's fine, thanks! Drop us a link here when the video is done! Thanks for asking!

Will do! Hopefully it'll be ready within a week.