Capsule Robo G (カプセルロボＧ) was one of my first Japanese Jumbos, arriving along with Getter Poseidon from the now defunct Kuru Kuru Toys. The specimen I received was missing a few missiles, but strangely, not long afterwards, there was an auction on ebay for some. What a nice stroke of luck! It's not uncommon at all to see missiles for Jumbo Shogun Warriors or Popy Jumbos for sale, but not since have I seen loose missiles for a Nakajima Jumbo on ebay. [A quick note about the missiles. Nakajima Jumbo missiles look very much like the missiles that come with the Italian bootlegs Jumbos, such as Space Valour, but they are NOT the same. The bootleg missiles are shorter and have a wider base. What this means is that while a Nakajima missile MAY shoot out of a bootleg jumbo (It worked on my Titan, but not my Space Valour), a bootleg missile will NOT work with a Nakajima Jumbo.]

Anyway, this is a great toy and it's the only non-bootleg Jumbo to not have been based on a character from a TV show. Instead, Nakajima created the character specifically for their line of Astro Mu 5 toys, which only had an original comic book to provide backstory. This was the only character from the line to be released as a Jumbo. It would also be released as a 10" missile firing vinyl and a 3" mini vinyl, both of which are much harder to come by than the Jumbo.

Capsule Robo G is a really great toy. It combines the sheer size, majestic stance and simple colors normally associated with Jumbos, but in terms of design really harkens back to the tin robots of the 1950s. Some don't like this break with (or return to!) tradition, but I think it's really neat looking and sure stands out from the pack as a result. The design of the face alone is worth your toy dollar.

The toy comes armed with 4 working missiles launchers. Only the ones on the shoulders and hands work. The missiles in the chest are just for show/storage. They can be manually turned, but they do not shoot. I really dig the ones on the hands, always at the ready, just waiting to take on some foolish enemy. 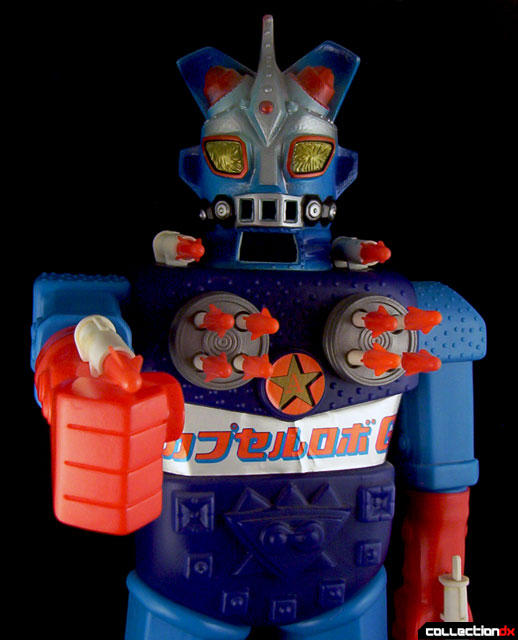 While the toy is made primarily of polyethylene, the head, hands and missile holders on the chest are all soft vinyl. Both the head and hands can be easily removed. The head is lifted out to allow you to place an Astru Mu 5 action figure inside to pilot the robot. The head of the figure should then be able to look out of the hole in Capsule Robo's neck. The hands can come off and be replaced with accessory fists. Evidently, Nakajima planned an accessory fist for this called "Gun Hand", but I'm not sure if it was ever released. I've certainly never seen it. But fear not, the Popy fists will work just fine, too. 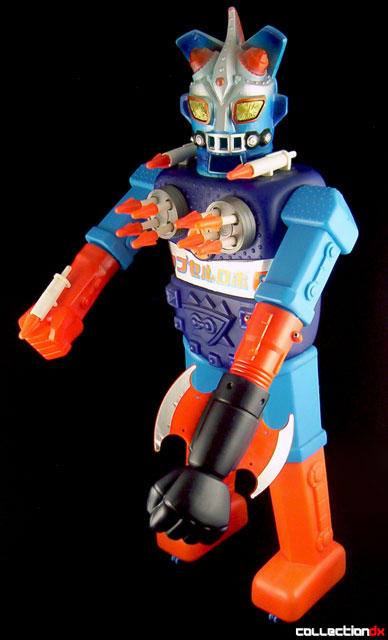 This toy has the standard articulation you would expect from a Jumbo and has wheels on the feet. One of the cooler ways that Nakajima set themselves apart from the pack with their Jumbos was that they also included 2 mini-vinyls with each. I typically don't actually display these with my Jumbos, instead putting them in my vinyl case. So sometimes I forget which ones came with which. These two are for Capsule Robo G. 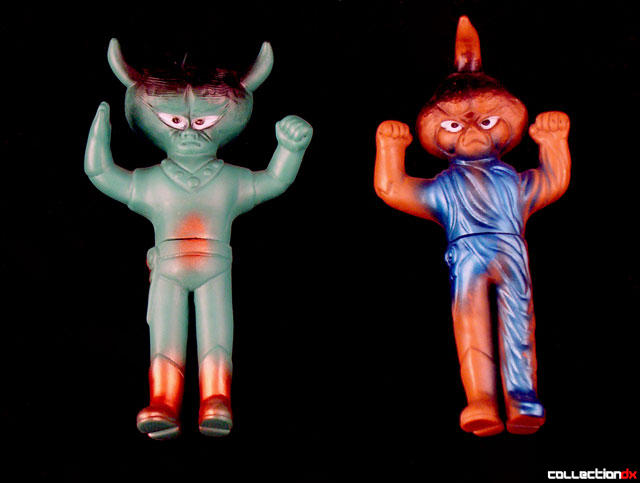 While this is still considered one of the easier Japanese Jumbos to find, in the years since I started collecting, they seem to have become much scarcer. Back when I got mine, it seemed like they were everywhere, and always mint in box. (It was only the excitement of a Jumbo newbie, along with the prospect of combined shipping, that convinced me to get one missing parts.) But recently I've not seen nearly as many. I'm sure they are still out there, but I'm guessing the price has probably gone up (like it seems to be doing with all Jumbos unfortunately!).

Furthermore, I forgot to mention a variation on this toy. On most, the head of the toy is simply inserted into the opening in the shoulders, but on some, there are two tabs on either side of the neck that have to be lined up with holes in the shoulders first, then inserted and the head turned to straighten it out.

At least one known example of this actually came with Gun Hand included and 3 vinyl villains. I don't know if this was the way it was released or if there just happened to be extras in the box.