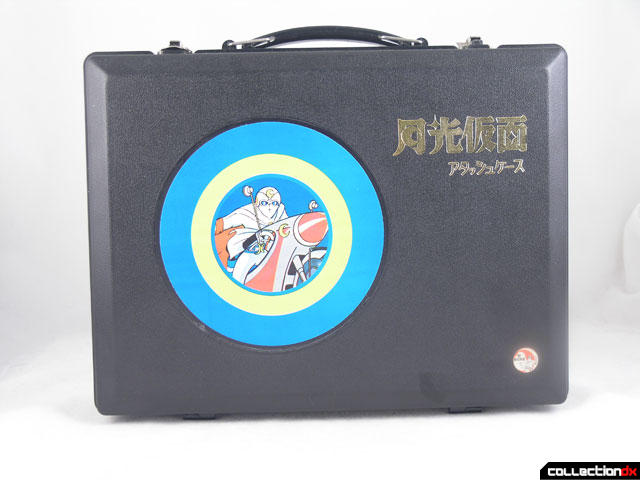 Back in the early 70s, Bandai made a bunch of Attache Case sets for a lot of the live action shows at time. Shows like Ultraman and Ultraseven got these briefcases full of all the accessories one might need to pretend he himself was the hero. 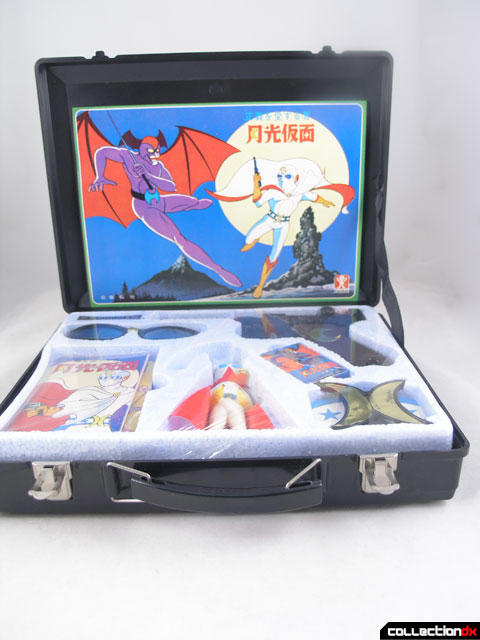 "Moonlight Mask (月光仮面, Gekk? Kamen) is a fictional superhero that has appeared in Japanese tokusatsu and anime television shows and movies since his TV debut in 1958. Created by writer K?han Kawauchi, Moonlight Mask is best described as Japan's answer to The Lone Ranger and Batman.

Whereas Super Giant is Japan's first celluloid superhero (only he had debuted in movies), it was Moonlight Mask who set the standard as Japan's first live-action TV superhero, and was a huge success with children. Television was already new in Japan, so many children that didn't have a TV set were gathered around to watch it at a friend or neighbor's house. Children also bought toy capes, sunglasses, masks and pistols and played Moonlight Mask in schoolyards and backyards."

This toy looks to have come from the 1972 Moonlight Mask anime series, due to the art used on the package.

The plastic case is sealed shut by a metal clasp on either side the handle. Inside the case is a cardboard print of Moonlight Mask battling a character that is reminiscent of Devilman. 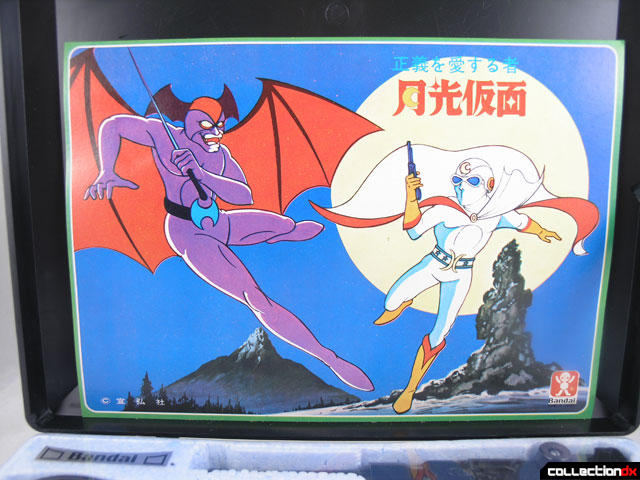 The bottom of the case features a styrofoam tray, sealed in plastic. 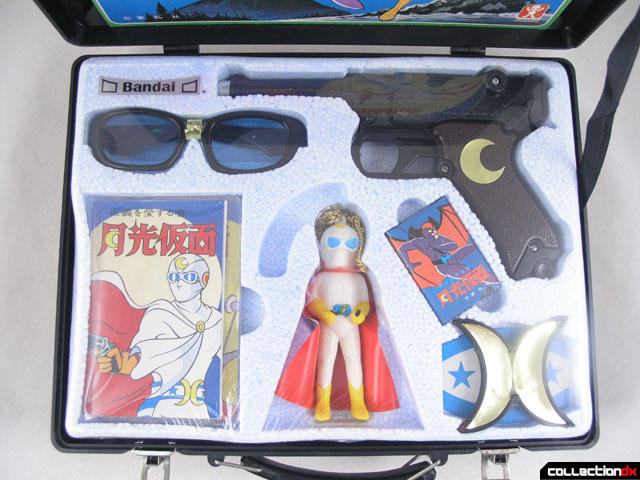 36 years; still sealed in plastic. Josh Fraser was not about to let me open it.

From what we can see inside, the set includes a variety of gear, including: 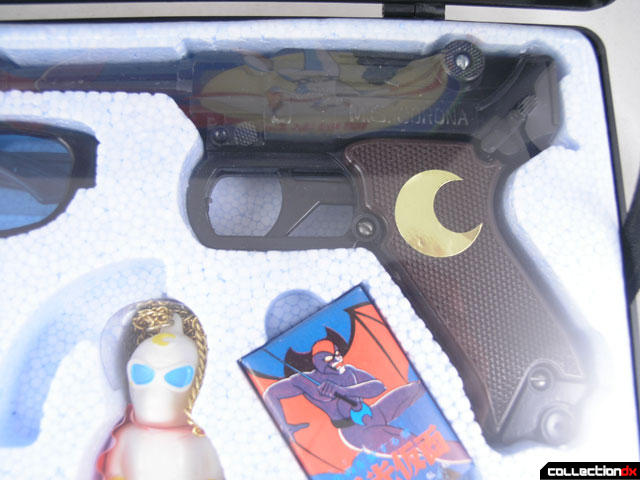 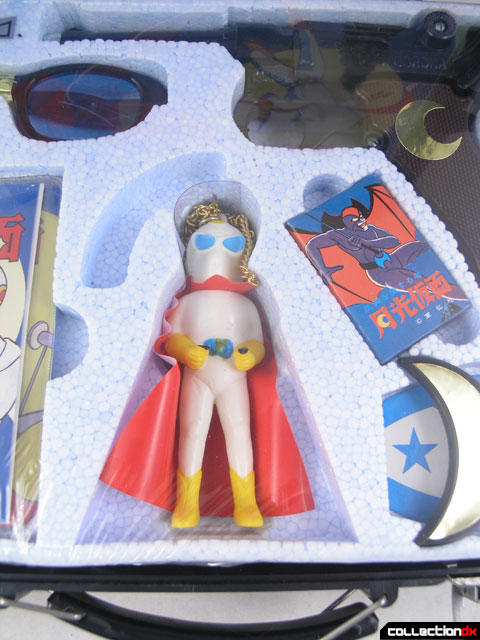 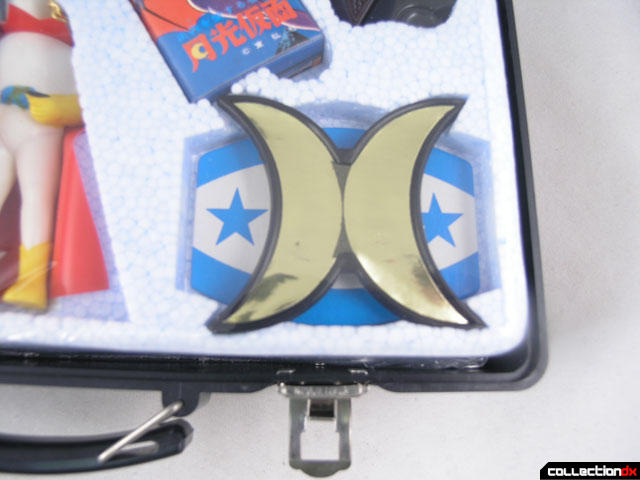 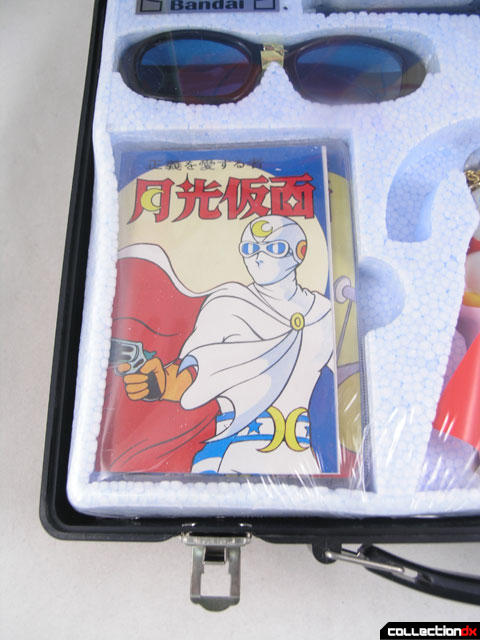 Its interesting to note that this was actually made by Bandai in 1972 - not Popy, at a time where Popy was really dominating in character toys. Note the retro Bandai logo.

This thing is so cool, I am sorely tempted to start a collection of character toy Attache Cases...

That's pretty awesome, although I think it's pretty clear that that vinyl figure is not just a figure, but a pendant.

Iirc, a clip of the original show can be see in the movie "Good Morning" (aka "Ohayô")

THANK YOU JoshB and Josh Fraser- I hope the "Mr. C10" series of reviews continue, these are real treasures, that you can see in mint and pristine condition (great for seeing what a REAL mint c10 piece looks like, and I look forward to each item from the collection that you guys showcase!

That's a very interesting Toku superhero. I'm very curious to wonder if Moonlight Mask had inspired Doug Moench to create the Marvel superhero MOON KNIGHT. If not then that's one hell of a coincidence b/c their costumes look almost identical; there's no question about it. I wouldn't be surprised if this predates the creation of Moon Knight.