Shortly after returning home from Japan with my four other yokai toys, I was informed that there was one more that I needed to get to complete the set. That toy was Ikkaku Daioh, commonly referred to as the "Blue Demon", although according to Club Tokyo, the term actually means "One Horned King". 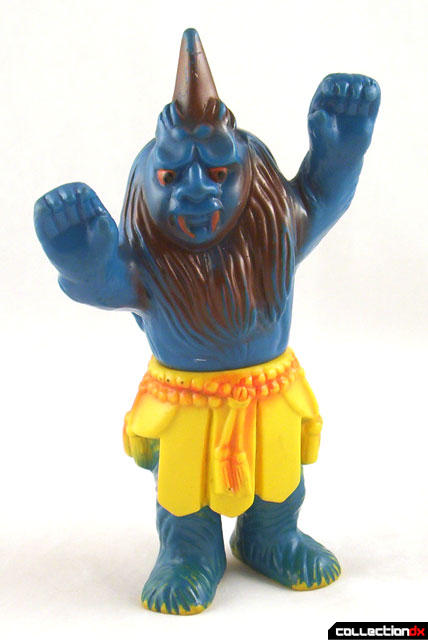 Like most of the others in the series, Ikkaku Daioh features only one single point of articulation, that being at the waist. His arms are permanently in a fixed upright pose. He looks like he might be casting, or warding off, a spell. 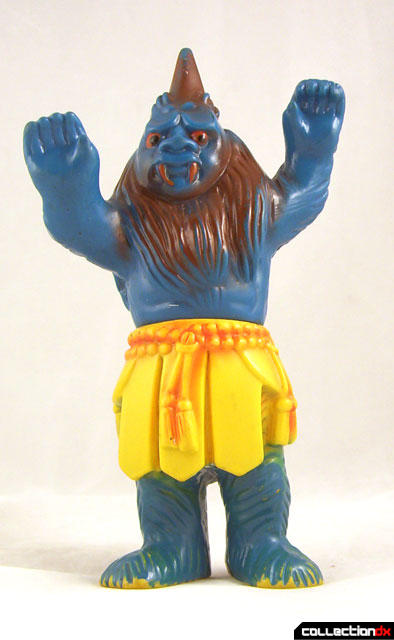 Although he is roughly the same height as the Abura Sumashi and Hitotsume-Kozou toys, he looks smaller since it is his horn is nearly one inch tall. His appeal lies mainly in his dark blue color which is nicely contrasted by the bright yellow of his clothing. Some brown and red round out the color scheme.

Two other factors may make Ikkaku Daioh appealing to the yokai collector. First, he's probably the rarest of the Nitto Yokai toys, so one might enjoy hunting for him and treasuring the toy more once it's acquired. However, even though he's the hardest to find, he does turn up. It took me nearly one year to get one, and even in that time I passed on at least two specimens while waiting for one at a price I liked.

Secondly, this is the only character in the set that does not originate in traditional Japanese folklore. Daiei Studios created this character specifically for their late 1960s series of yokai movies.

Like most of these vintage yokai toys, Ikkaku Daioh is best enjoyed when displayed with the others. Unfortunately, there are only the 5 vintage yokai vinyls. Some more recent toys have been released, but not many. Perhaps the most notable recent yokai toys are the Daimon standard size vinyl by M1 and several smaller yokai vinyls from companies such as M1, Tomy and Bear Model. There is also a very nice doll of Abura Sumashi by Tsukuda Hobby, but overall the yokai seem to have gone somewhat neglected in toy form, which is a crying shame, in my opinion.

If you are interested in learning more about traditional Yokai monsters, be sure to check out the upcoming book Yokai Attack! The Japanese Monster Survival Guide. It's available this summer in Japan and later this year in both the US and the UK. The book is written by good friend Matt Alt (of ToyboxDX fame) and his wife Hiroko Yoda, both stars of the "Great Yokai War". 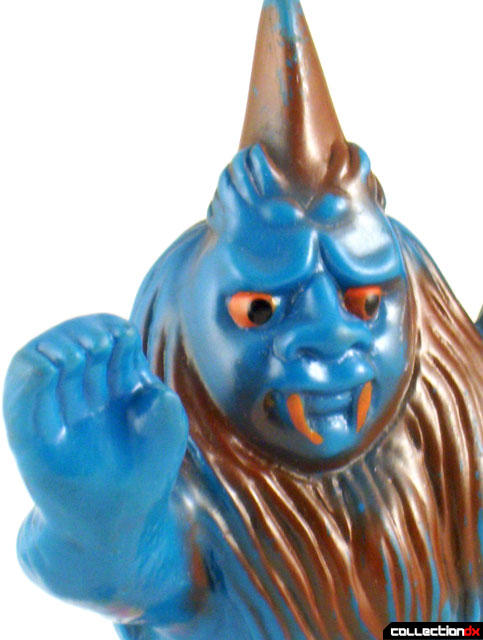 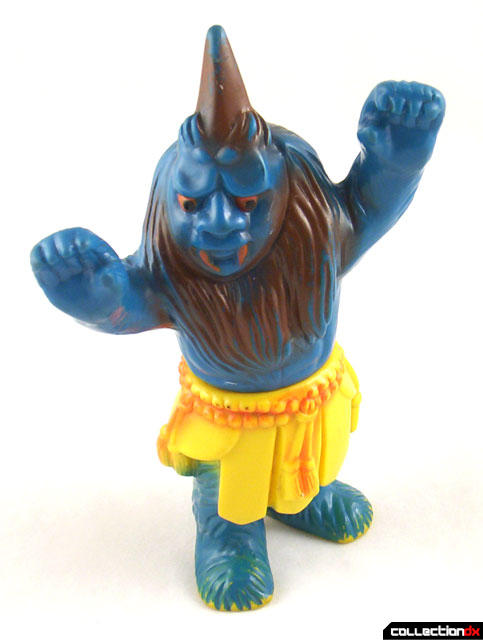 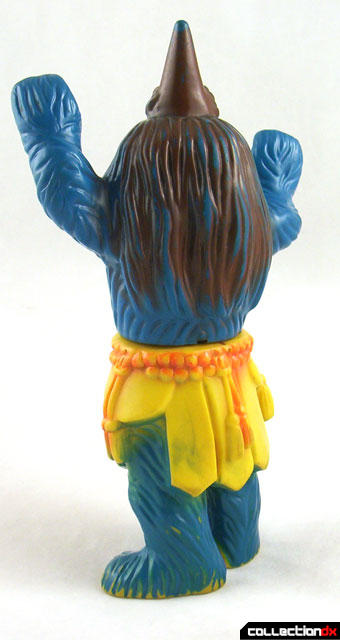 4 comments posted
The pose and the yellow jams

The pose and the yellow jams make him look like he's surfing. Cool toy.

What a wild line of toys you've been reviewing and thank for reviewing them! I would have never known about them if it wasn't for you reviews.

I don't particularly want to know how much you paid for them but it would be great if you put a ballpark price just so we know!

Thanks, Leonardo! As for the prices, well, as I mentioned in the Kara-Kasa review, I paid 70,000 yen total for the first 4, but that was with a 15,000 yen discount. I think the original asking price at the shop was 30,000 for Kara-Kasa, 20,000 yen each for Abura Sumashi and Ushi-Oni and 15,000 yen for Hitotsume-Kozo. I distinctly remember being happy that the discount was that much (I thought maybe 5,000 yen) and thinking that I basically got Hitotsume-Kozo for free. Unfortunately, after I got mine I really haven't tracked prices too much so I'm not really sure if what I paid is typical. There is a Kara-Kasa on Yahoo now for 26,000 yen though, and I know it's been there for awhile. It's missing the elastic like mine.

Ikkaku Daioh I later got a really good deal on on Yahoo!Japan. Literally two weeks after one sold for 47,500 yen, I got one for 13,000 yen!! I had seen another previously that ended in the 40,000 yen range and I remember when Matt Alt first told me about this one, he said one had just ended at 35,000 yen. So I guess if I overpaid a little on the first four, I made up for it on the fifth!;)

I've heard of the yokai movies, but have never seen any of them. How are they?