These days I have been spending much of my extra hours at the local flea market antiques fairs, looking for odds and ends for my many collections and generally having a good time at it. I just never know what I am going to find at these swap meets as the strangest items often turn up. 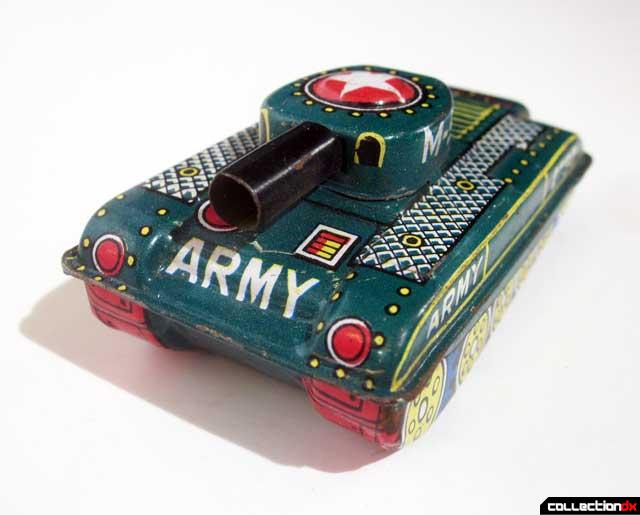 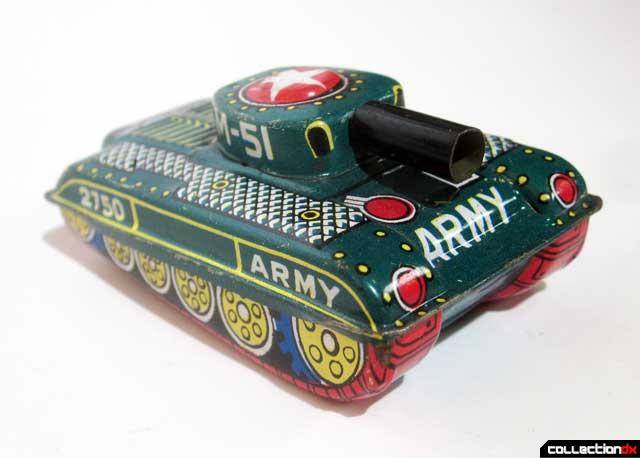 Take for instance last month. I was in the middle of purchasing an item when I saw the cool little vintage tin tank that was made in Japan sitting in a basket of toy cars. I made the deal and walk away with $1.00 in my pocket. I walked few vendors away from the seller. Then it hit me. “You know, I better turn around and go back and buy that tin tank or I’ll regret that I didn’t and kick myself for doing so.” I only had a $1.00 in my pocket and when it came down to it that was all I had to offer. I approached the dealer and picked it up out of the basket it was in and asked him if he could take $1 for this tin tank. He said, “Well, I really shouldn’t but you are a return customer, OK I’ll take it.” And with that I walked away with this tin tank. 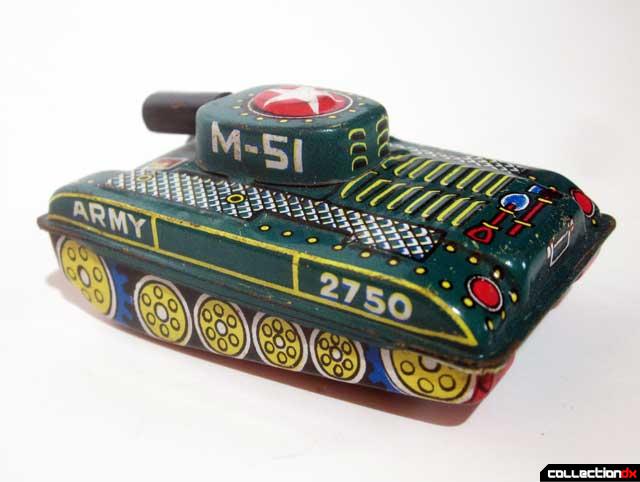 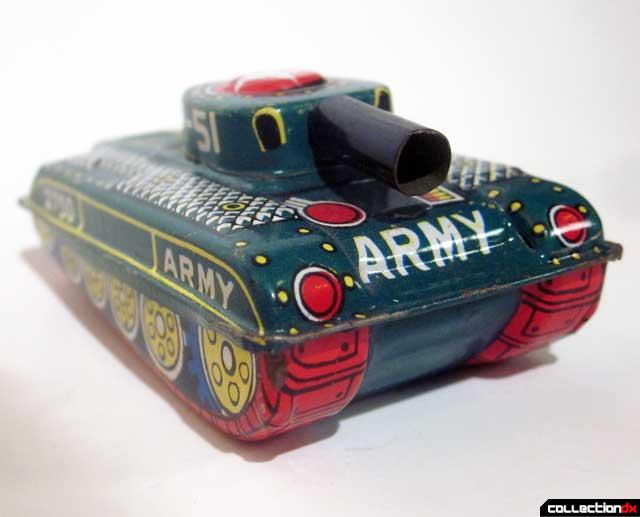 What I loved about this tank is that this is old world Japanese toy making at its best made up of a few stamped brightly color lithographed tin pieces with a friction engine with hard rubber wheels set into the body with a few bent tabs with that phrase “Made In Japan” prominently stamped on the bottom. Although I do not know who the maker is, this was a wonderful example of Japanese toy making of the 1950’s and 1960’s Showa era. 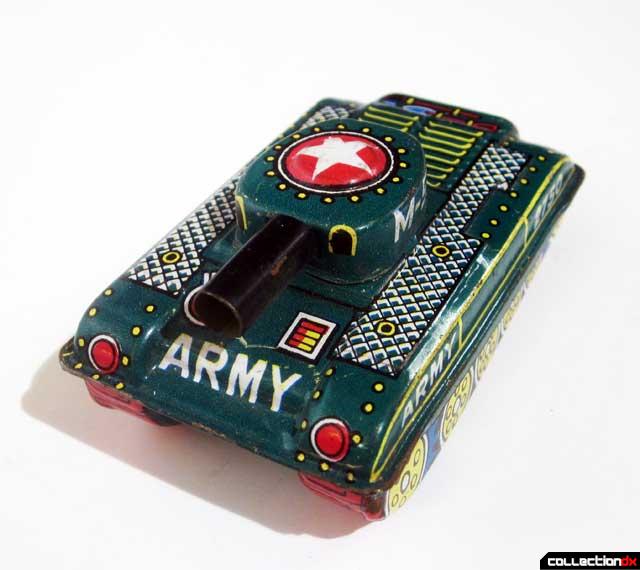 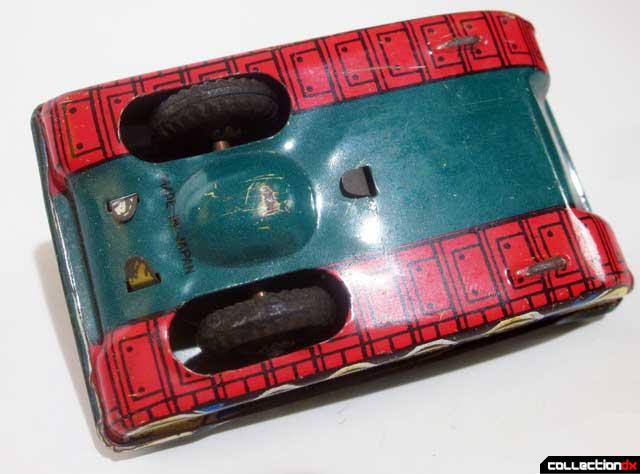 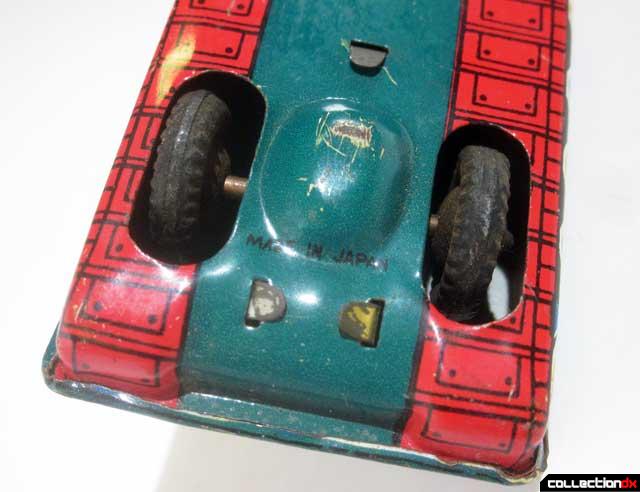 Talking to my militaria friends, it appears it might have been influenced off a M-551 Sheridan tank but over all is just a standard 1960’s looking anonymous tank that was made to simply appeal to young children. Although I do not have a set time this was manufactured I do place it sometime in the 1960’s most likely after the Sheridan tank was put into operation in 1966. 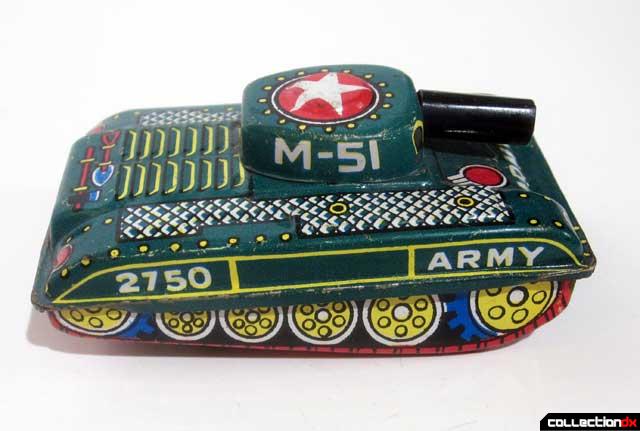 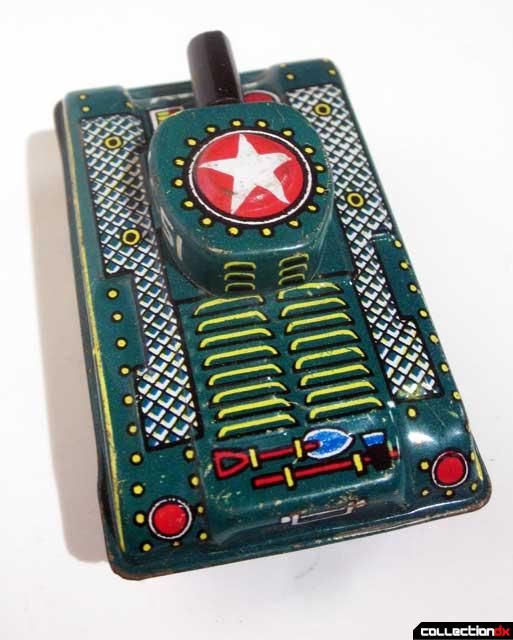 And what a wonderful toy it is, I like all the great details of the colorful tin lithograph such as the shovel and entrenching tools on the back and white stencils throughout, almost a foreshadow of colorful Popy toys of the 1970’s and 80’s. I love the circular bent short cannon and what it appears to be “eyes” on the turret SD style. Perhaps you can even say it was a SD version of a Sheridan tank. Overall the beauty of this tin tank is in its simplicity. 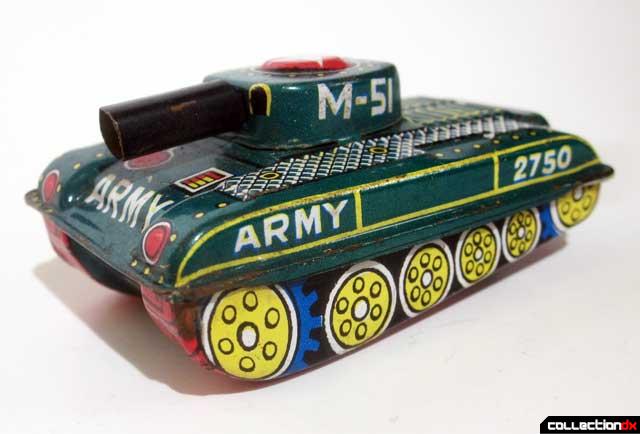 The 1960’s were a changing time for Japan and their many industries, which were still recovering from WWII and It was these small simple items such as this vintage tin tank that would help bring Japan back as one of the foremost toy designers in the world.

©2012 article and photos by Leonardo Flores and CollectionDX

The best reply ever...made me laugh out loud!!!