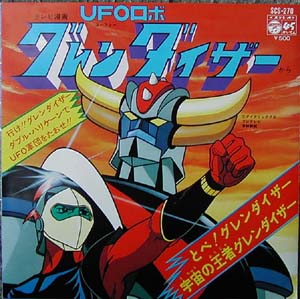 UFO Robot Grendizer (UFOロボ グレンダイザーin Japanese, a.k.a. Grandizer in America, Space Adventures in the Arab World , Goldorak in France and Québec, and Goldrake in Italy and Malta) was a mecha anime show created by legendary Japanese anime artist Go Nagai. It was shown on Japanese TV in 1975 and lasted 74 episodes.

Grendizer is a fictional mecha from the anime and manga series of the same name, created by Go Nagai. Within the story, Grendizer was created by the Vegan Empire and stolen by the Prince of Planet Freed, who piloted it under the guise of the masked warrior Duke Freed. (Wikipedia)