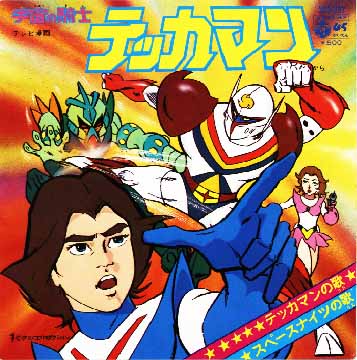 ekkaman: The Space Knight (宇宙の騎士テッカマン Uchuu no Kishi Tekkaman) was an anime produced by Tatsunoko Productions in 1975.

Released in the mid 1980's in the United States, Tekkaman the Space Knight
received excellent ratings on television in the U.S. and generated lots of
positive fan mail. As syndication sales grew, television was suddenly bombarded
with toy-driven "robot series" including "Voltron," "The Transformers," "Go-Bots," "Robotech," "Silverhawks," and
more. This flood of bartered ("free") programs, all produced by large multi-million
dollar corporations, destroyed future sales of Tekkaman (regardless of the
excellent ratings) because at the time William Winckler Productions was a small
independent company without a major toy company behind it.

Winckler attempted to stay as true to the original Japanese series as possible,
doing as little editing of violence as possible, and leaving all the original
Japanese music and sound effects in. This was very unusual at the time, considering
how show's like "Gatchaman"/"Battle of the Planets" were handled. In fact,
at the time, Ted Turner was considering buying Tekkaman for his giant cable
network, but turned the show down due to the heavy battle scenes. Tekkaman
is one the last of the four hero shows from Tatsunoko Productions, and has
a huge cult following worldwide. The opening theme Tekkaman
no Uta is sung by Ichiro
Mizuki. (Wikipedia)