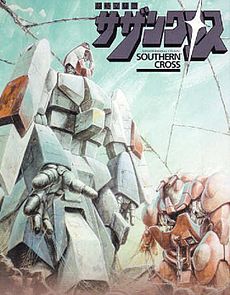 Super Dimension Cavalry Southern Cross (超時空騎団サザンクロス, Chōjikū Kidan Sazan Kurosu) was the third Japanese animated (anime) series released under the "Super Dimension" moniker by the sponsor Big West. This 1984 science fiction robotic mecha series followed Super Dimension Fortress Macross (1982–1983) created by Studio Nue with Artland and produced by Tatsunoko, and Super Dimension Century Orguss (1983–1984), also created by Studio Nue with Artland and produced by Tokyo Movie Shinsha. Unlike the other two series, The Southern Cross was created and produced almost entirely by Tatsunoko with mechanical designs by its sister studio Ammonite. The series lasted for 23 episodes. The three titles share some of the same creators, and Macross is referenced by character cameos and inside references by the latter two series. However, the basic stories are unrelated. Southern Cross was the least successful of the Super Dimension banner and was actually canceled due to low ratings, forcing the scriptwriters to hastily conclude the series.

Most of the animation of The Southern Cross (with edited content and revised dialogue) was adapted outside Japan for the second part of Robotech, following The Macross Saga, and preceding The New Generation. In this form, it is frequently referred to as Robotech Masters (as it was titled in the comic book adaptation released by Comico).