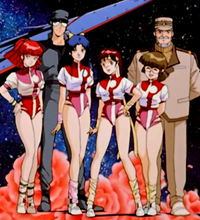 Gunbuster, known in Japan as Aim for the Top! Gunbuster (トップをねらえ!, Toppu o Nerae!) is a six episode anime OVA series created by Gainax in 1988. It was the directorial debut of Hideaki Anno, best known as the director of Neon Genesis Evangelion. The title is a combination of the titles of classic tennis anime Aim for the Ace!, whose plot inspired Gunbuster's, and the 1986 film Top Gun. To celebrate Gainax's 20th anniversary in 2004, an official sequel to Gunbuster, Diebuster (or Gunbuster 2), was released as an OVA. The series features new characters and mecha, but retains the format and many of the concepts of the original series.