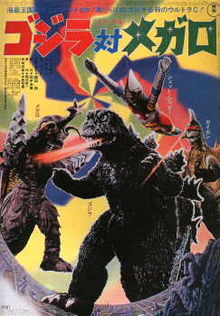 Godzilla vs. Megalon (ゴジラ対メガロ, Gojira tai Megaro) is a 1973 Japanese tokusatsu kaiju film directed and co-written by Jun Fukuda with special effects by Teruyoshi Nakano. It was the thirteenth film in the Godzilla franchise. It is the second film to feature Gigan and the first and only film to feature Megalon and Jet Jaguar.