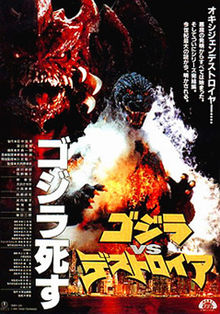 Godzilla vs. Destoroyah (ゴジラVSデストロイア, Gojira tai Desutoroia), alternatively titled Godzilla vs. Destroyer, is a 1995 film directed by Takao Okawara and written by Kazuki Omori. It was released in Japan on December 9, 1995. It is the 22nd installment in the Godzilla series of films and the seventh & last of the Heisei series.