Do you know who Alen Yen is?

Alen Yen is a man of passion. He is driven by shooting fists, missiles you can choke on, and most of all, the “funk” of a vintage Japanese robot toy.

This passion has served him well in life. Back in 1996 he created ToyboxDX.com as an outlet for his love for the toys from his childhood. He put up a message board, and as people began searching about those fuzzy memories from their childhood, they found their way there. I was one of those people. The DX in CollectionDX is my tribute to Alen and his site. (it’s true!).

It seems like the natural progression for us creative types. After a while of collecting toys, you want to make toys. Not just any toys though, toys that are reminiscent of the toys you had when you were young. 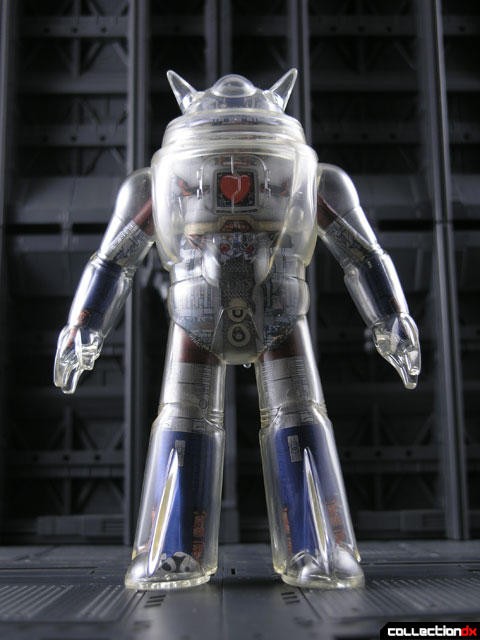 And that is what Alen did. He started Incubot as an outlet to produce toys. The first release was the Nekobot USB figure (reviewed here) and now he follows it up with the Nekosaur Crystal Sofubi. 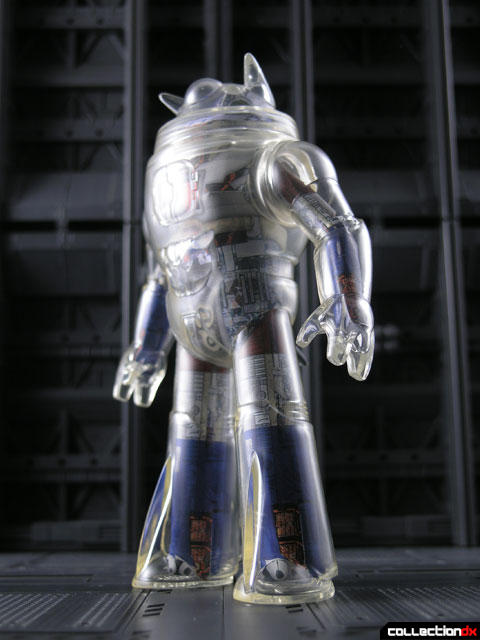 Sofubi stands for Soft Vinyl, the material that classic kaiju toys are made of. In addition to rubber monsters, they also made sofubi toys of the hero characters – Ultraman, Kamen rider, and even giant robots like Mazinger Z. Most soft vinyl was molded in color, with few points of articulation and were either sold on a blister card or in a bag with a header card. Sometimes, to get more life out of a mold and mix it up a bit, manufacturers would make the same release in different colors. It is the clear versions of these toys that drive us insane with lust. Any old Kikaida vinyl? Cool enough. Clear Kikaida Vinyl with paper inserts showing the mechanical workings? AWESOME.

It is from this particular vinyl fetish that the Crystal Nekosaur has derived. 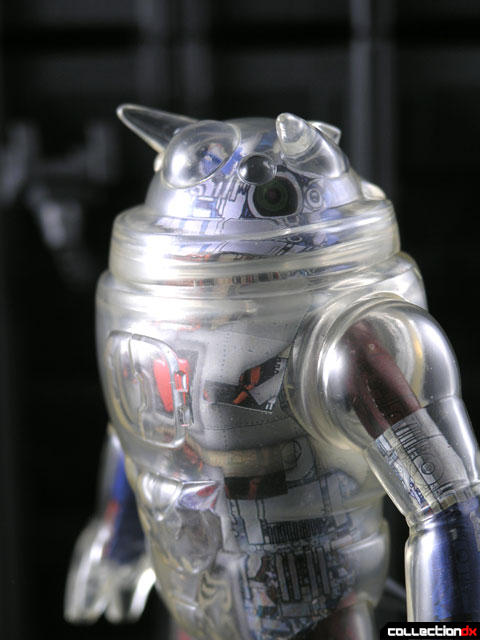 The Nekosaur stands 6 inches tall and is made out of clear soft vinyl. The sculpt was done by Kiyoka Ikeda of Gargamel, and the figure was produced in a Japanese factory renowned for making vinyl toys. Japan is probably the last place on earth that can make transparent vinyl with this clarity. You won’t find this quality in China. 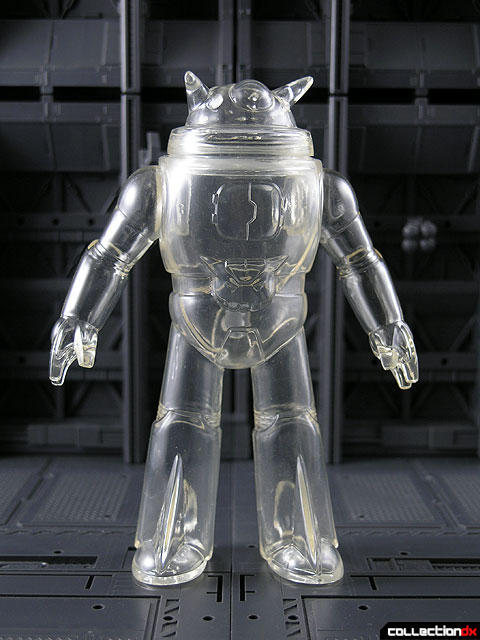 The toy is molded out of four separate parts – body, two arms, and a head. The whole figure has a classic super robot design combined with modern sensibilities. I mean, it’s a cat robot, it’s got cat ears and a tail. Neko = Cat. It’s cool. 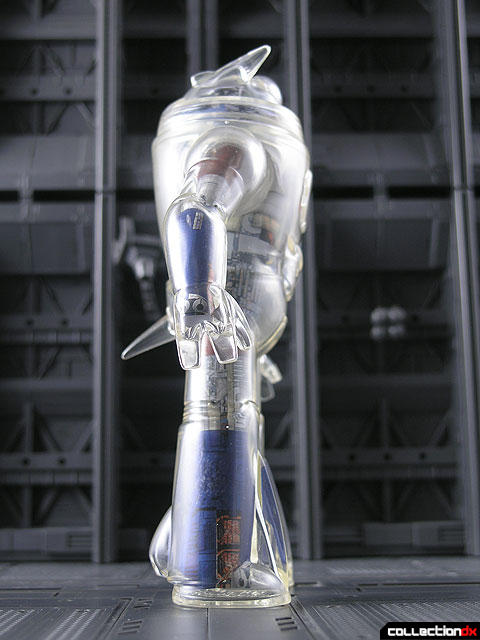 While the figure comes clear, the insides are cut, folded and inserted by Alen himself. Each one took quite a long time to assemble, and Alen probably has carpal tunnel from all that cutting. 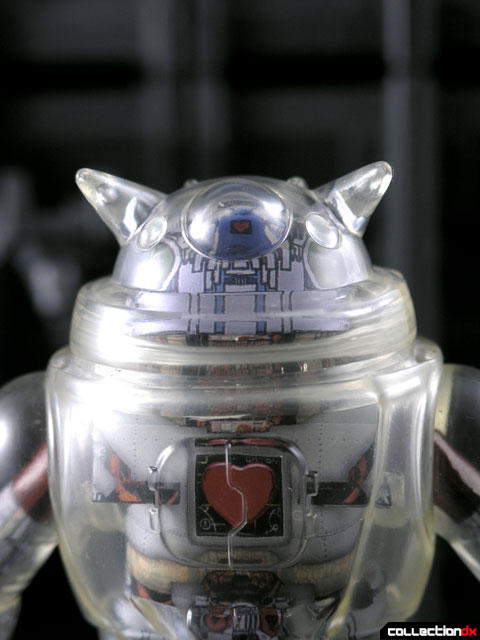 The inserts are a detailed mix of mechanical parts, color coded to show the different sections of the robot. There are some cool details in there, such as the heart in the chest, and the small Nekobot pilot in the head. 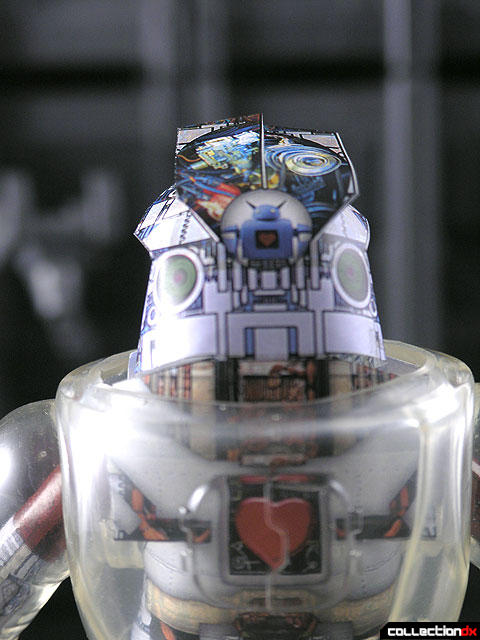 As a bonus, you can turn the head around and it looks like another face! 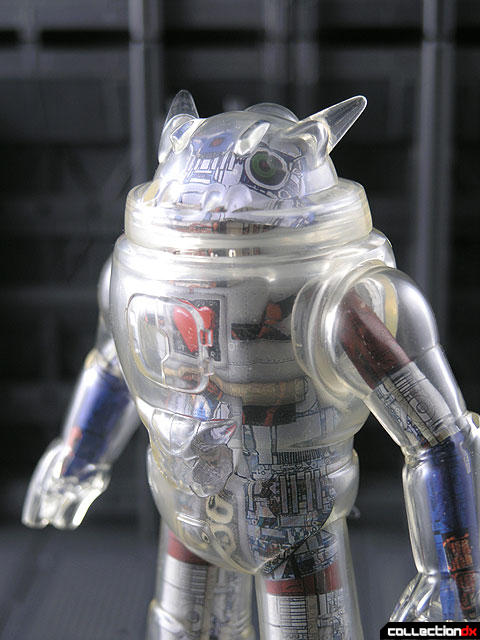 It's a bit tough for me to objectively review this, as Alen is a friend, and I want to support what he does. But honestly, I think its a great little toy. Those who are into this type of toy will really dig its aesthetics. It's high quality and you can tell a lot of love went into it. 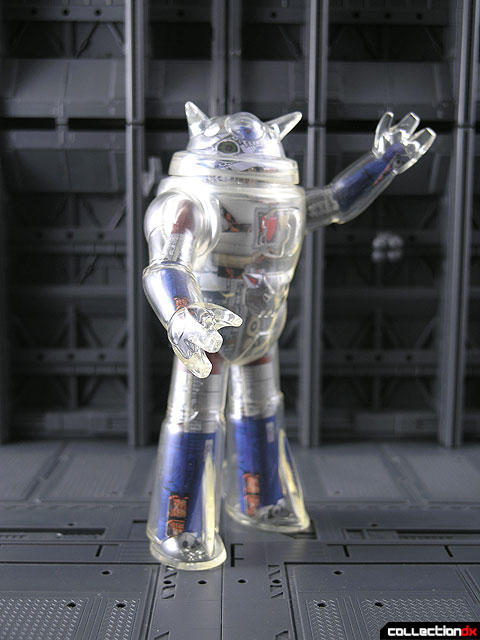 There are a few minor nitpicks that I will point out to balance out my unabashed fanboyism. For one - the price. It's a lot of money to spend on 6 inches of vinyl with three points of articulation. But it is a premium piece, sculpted by one of the best in the business. Sure, it could have been made in China, but you would not get this quality. Liken it to a craft beer - You are paying for the extra care put into a product made in small batches for a specailized market. Check out the header card designed by Alen himself:

You might notice that the vinyl has a slight yellow-ish tint to it. I'm not sure if all clear Japanse vinyl looks like this, but you can notice it a little. 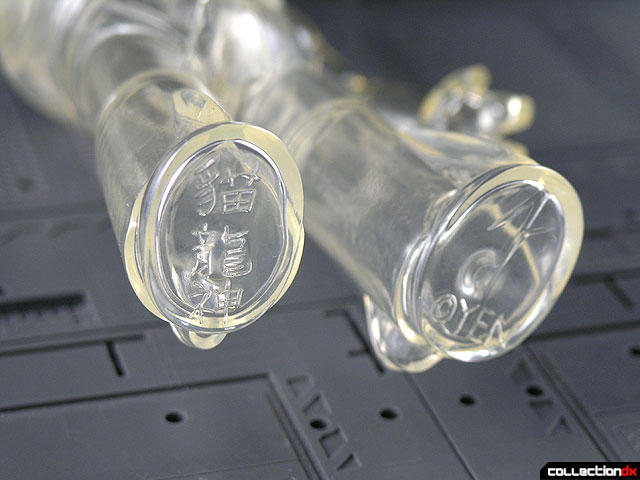 Also I think there was a missed opportunity with the hands. They beg to be able to hold something, but the hand pose does not allow for any grip.

But these are minor issues - I think overall it is really fantastic. I can't wait to see what they do next...

Great review Josh, I'm glad you threw in those little objective bits at the end. Grasping hands would have been quite cool, as the Neko-USB has them, and the art for that package features weapons.

I'm a little surprised though, yours really does not look that clear in the photos... is it a result of the lighting? Mine, this guy look like cut glass in person... the clarity really is amazing. I know I'm looking forward to the first painted releases, but I think this one may remain my favorite.

Ben, it's definitely just the lighting. Josh's photo setup has lights above and on either side of the toy, but because he's standing on that display base, there's nothing from behind or below. So, a lot of light will reflect off of the glassy surface into the camera. Meanwhile, there won't be any light from behind or below to transmit through, like you see in most pics (like this sweet shot from Roger Harkavy).

Really, it serves me right. About 4 hours after teasing Josh, I went to take my own Neko photos and realized that it is a paaaaaain to take good shots of clear things.

You forgot to point out the Terminator face in the waist. Also, my name is on the header card! Yay! lol.

the design of this embodies everything I love about classic robots, simple effective design. It doesn't shoot fists but it still can attract lovers of those types of bots. Another thing, first time I saw this I assumed it was hard clear plastic... but its vinyl?! wow that's clear. This may be my first official vinyl purchase. Will this start me on the road to brokeness? I hear vinyl is addictive...

I like the nekosaur's basic design, and visible parts beneath a clear shell is lovely. I'm opposed the the heart, though. It's a cliched conceit of many modern designers to stick hearts on robots, and it turns my stomach. If you're going to have a heart on a robot, go the full Lisa Frank mile and cover it in rainbows and rhinestones. Robots win our adoration by the charm of their design, not by the tacking-on of trite symbols.

Not a Robocon fan I take it?

Actually, I adore robocon and desperately want to watch it.

I am not going to get into a design debate since everyone's design sensabilty is different, But I don't feel anything about Alen's design process is "trite" or the design is lacking. It just means you have subjective views of certain iconography.

I don't feel his design is lacking. I just don't like the heart, and hope that in the future he'll make even better toys. Ones without hearts.

I'm sorry, I can't do this. Even if I wanted to argue, I couldn't. Not with a man who is holding a jumbo daiku maryu.

Unlike probably a lot of the people here,I have no idea who this Yen guy is,so I'm totally unbiased. What's the matter with having a heart inside the robot as a funny easter egg? Lighten up,toys are supposed to be fun.

You may notice that there's a hatch in front of the heart. If the toy was designed with an opening hatch, it would reveal the heart a la Robocon. Alen will probably fess up to it if you asked him but I'm pretty sure that's where that idea came from.

Check out the chogokin version of Nekosaur on Incubot's site. That heart is going to be a weapon.

Mighty Atom was the original "panel-in-the-stomach-opens-to-reveal-a-heart" robot, I think.

Hey Kidnicky,
You never went to ToyboxDx? I mean you come here and RobotJapan. Huh. If you ever have, as Josh pointed out in the review Alen created the Toybox site. ;-)

I like it but will save the cash to hopefully put toward his DIECAST release. I think he might also be planning for it to fire fists etc.! Please Alen?

Buy this vinyl (and a USB figure) and you'll make the possibility of the diecast being produced more likely.

I agree with the theory, but I will wait for the Dead Pres. colorways or a G.I.D. edition.
I've seen the box art for the chogokin. Looks GREAT!

Speaking of a gid edition...mwahahaha! ;)

Nah, I hear jacksauce about the heart thing. Can't please everyone, and that's okay. But here's the beauty of this toy: when you buy it, it comes with the uncut insert! You can just scan it, change it however you like, color-print it, and go to town! In fact, I think Alen's looking to post the template online so that people have full freedom to go nuts with this thing.

Anyway, like all sofubi these days, there'll be plenty more colorways coming in the future! Stick around.

That is totally awesome.

You know what would be awesome? Printing out either a photo or say a carciture of Nakajama (is that his name?) the Godzilla suit actor with his bandanna around his head and sweat dripping all over. You know,like instead of seeing what's fictionally in one of these guys,seeing what's -really- in there.

Y'know, I think I'm gonna go ahead and nominate that for the greatest idea in the history of vinyl kaiju. Bravo!