The Pheyaos Man is the third collaborative release from Real X Head and Onell Design, following two releases of the Pheyaos mini sculpt (one in Japan, review forthcoming, and one in the US). The Pheyaos Man is a combination of the Adult Chaos body designed by Mori Katsura, with a new head sculpt and weapon arm attachment designed in part by Matt Doughty. Using the new head sculpt and weapon arm, Matt and Mori have merged the iconic Chaos design with the Glyos aesthetic, into a first-rate figure, and a simply wonderful sign of things to come. 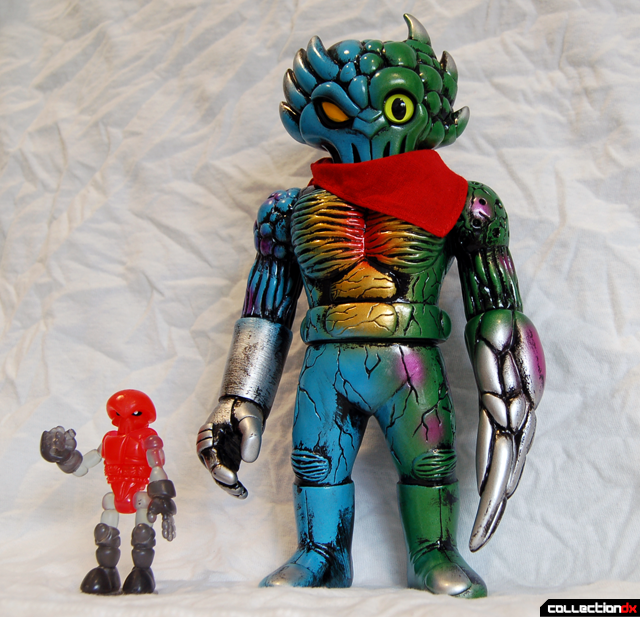 The Adult Chaos body is chock full of details and consists of seven pieces of high-quality black Japanese vinyl, articulated at the neck, waist, shoulders, and elbows. My previous Real X Head fight figure reviews show that Mori’s figures have shown a trend of moving towards more detailed sculpts with increasing texture. The Adult Chaos body is the next evolution of Mutant Chaos, all grown up into a serious figure, chock-full of classic Kamen Rider villain style. The body features boots, a muscled chest, a funky belt, heavy gloved hands reminiscent of knuckle dusters, and Chaos-ey detailed arms, tying together everything that makes Real X head figures cool. The body also represents a real innovation and new direction for this type of figure. With the Adult line, Mori has bridged the gap between fight figure proportions and styling and classic kaijin humanoid villains in rubber suits (including the characteristic Real X Head scarf). The Adult Chaos figures have a definite heroic slant to them, with a sleek silhouette and a slight bit of crotch-thrust, and I love them for it. The new weapon arm even looks like a mutation of the regular arm, with a large smooth section towards the elbow and tendril-like extensions reminiscent of fingers merging into a weapon. 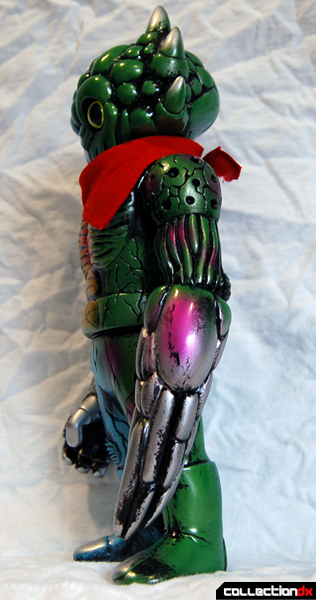 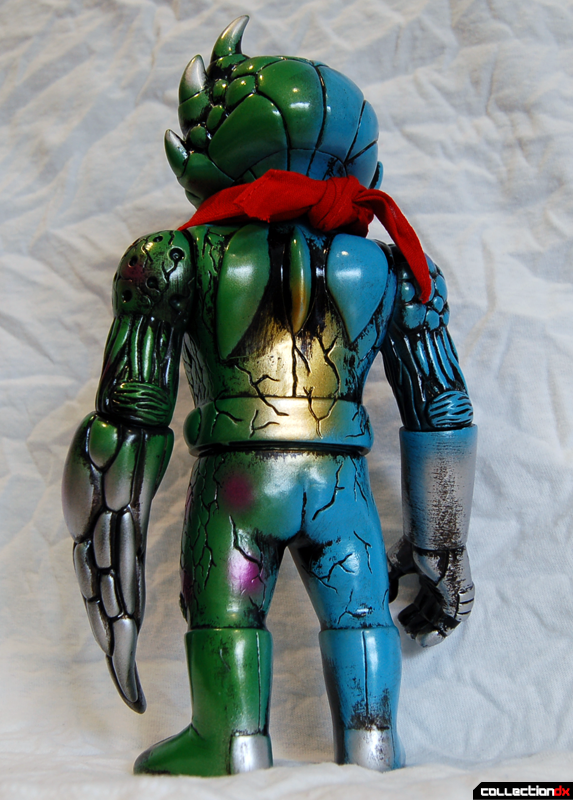 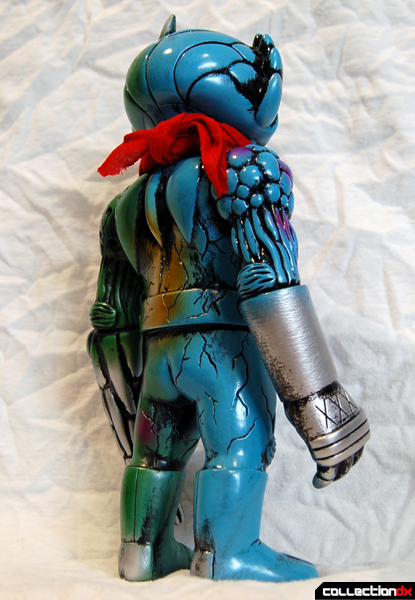 Moving on to the most important piece of the figure, the head sculpt, we get to see the true work of genius. Mutant Chaos has the ability to absorb the power and essence of others, and in this case, Chaos has encountered the Glyosian Traveler Pheyden. The head sculpt combines the details of Chaos, including the characteristic doll eye with the aesthetic and ‘face’ of Pheyden and his Glyosian brethren. 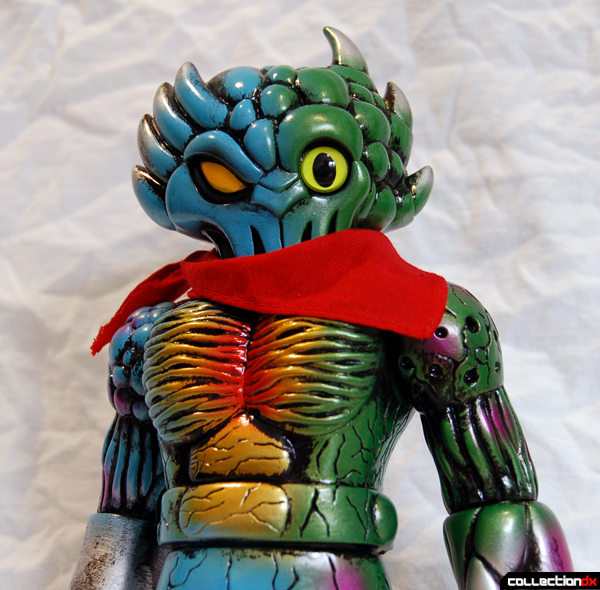 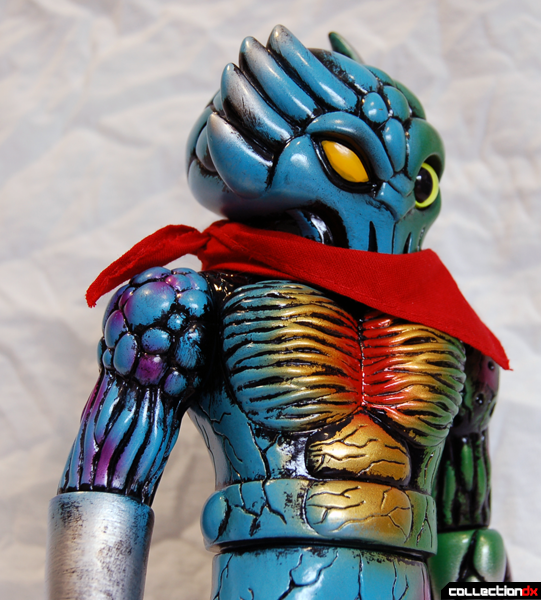 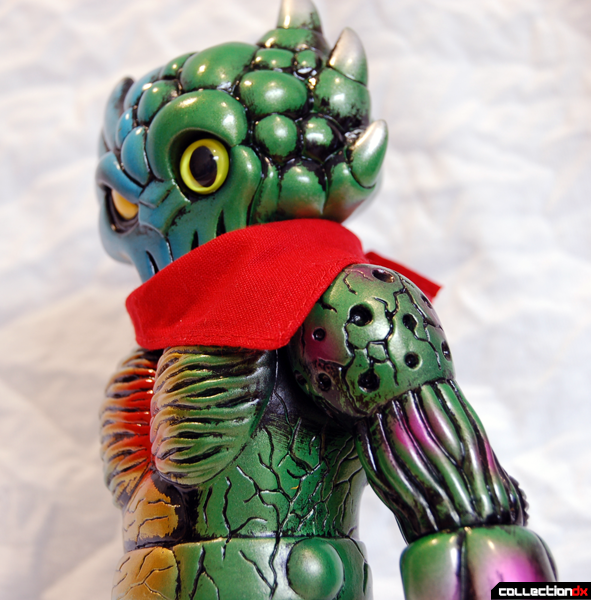 The whole package comes together under the masterful paintwork of Goto-san, Mori’s figure painter, who has been working in the industry since Bullmark started releasing kaiju vinyls back in the late 1960’s. The paint combines the characteristic blue of Pheyden with the distinctive green of a couple recent Chaos releases, painted half and half, as if Pheyden’s essence is so powerful that Chaos cannot completely assimilate the power. The entire paint job is done over black vinyl, with detail sprays and a black paint rub that brings out the fantastic amount of detail, just like Glyos figures are panel-lined to bring out all their resplendent detail. 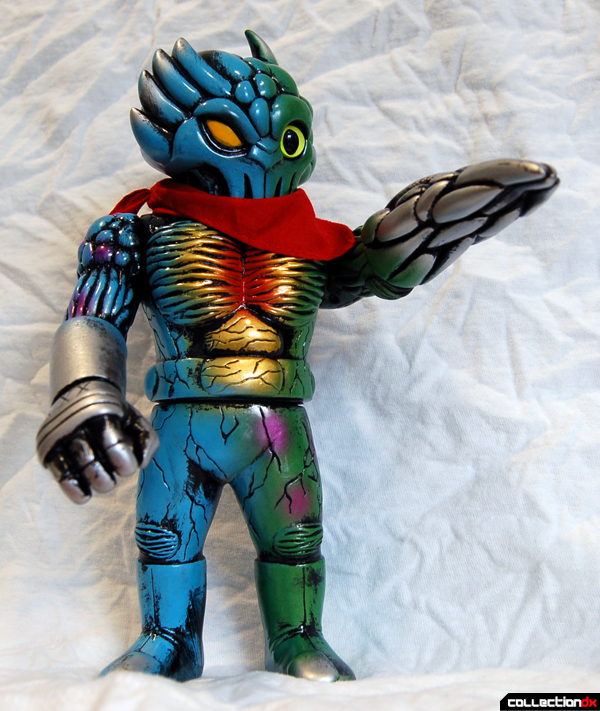 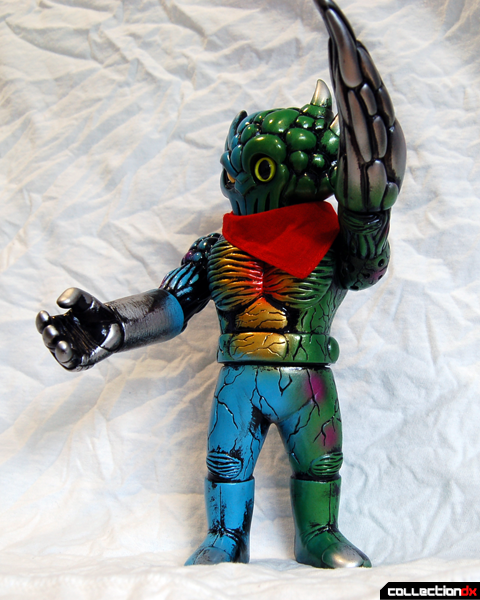 Now that I’ve got you all drooling, let’s talk about the prospect of actually getting one. According to the Glyos Transmissions Blog, the Pheyaos Man is going to retail for $60, and will be limited. ‘Normal’ Adult Real X Head releases imported from Japan by local retailers retail for $80, so right off the bat we’re benefiting from the close relationship that has developed between Real X Head and Onell Design. The figure shown here (sold out in minutes!) is the first US release by Onell, but it is not the first release of the Pheyaos. A few versions have been released in Japan, but we can be certain we will be seeing more US releases in the future, so all the people who miss out on this one need only wait for news of the next release. I got to sit down and have a long talk with Matt Doughty when I got my Pheyaos, and rest assured, he really and truly wants everyone who will appreciate the toy to get one, but, like many vinyl manufacturers, he has to work within the limits of vinyl production and quality control. Rest assured, we will see more Pheyaos, and this first definitive release is very much a sign of many, many good things to come. 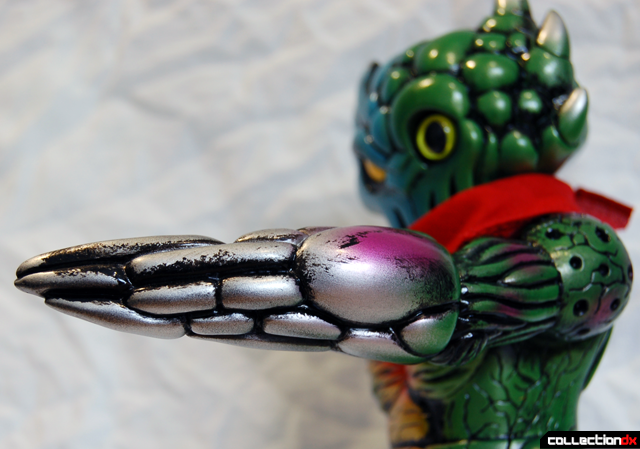 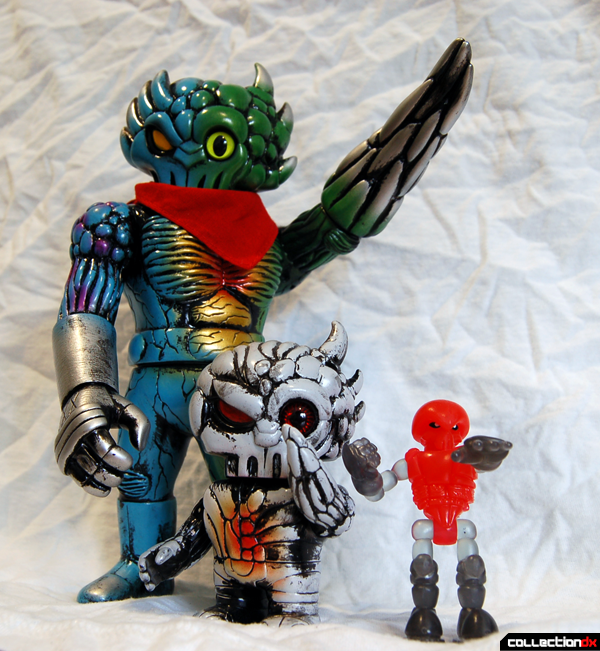 Beautiful toy. The colors on it are really striking.

This reminds me of Saturday morning.

Quick up update, Pheyaos Man is gone. I hope at least some people who were interested in the toy got some use out of this early review :)

I usually don't like Real X Head stuff, and Onell sounds like an interesting idea I've never really got in to, but this is just pure awesome. Maybe it's the scarf, or the funky Kikaider-esque paintjob, but it rocks.

Man, this is gorgeous. I don't really follow the Onell releases, so I had no idea they were doing something like this. Bummed I missed out, but now I'll definitely be following the blog for news of the next run.

wouldn't SAICLOONE! TREEGAH! be closer to the truth? Just sayin'...

That Gendou Ikari is the belt sums up pretty much my entire knowledge of Kamen Rider W, so I'll defer to you.

Cool but to scary for me !

I love this toy. It looks amazing, both in paint and sculpt, and of course the price break is nice to see on a RxH product.

I really love the Onell Design stuff. While I don't own any, all the ones i've handled are so much fun, and I love the fact the designs have this cool 70's-Henshin-Cyborg-Microman feel to them.

It's always nice to see a modern vinyl like this with not just an eye for unique colors and design, but also a teamup between two companies across 2 continents that both do excellent quality work. I wish more US designers would team up with the Japanese vinyl companies, I think we'd get a lot of interesting work from much more diverse artists.

I missed out on this but I will be keeping an eye out for re-colors / reissues from now on.

That looks awesome. I've been following the Glyos stuff for a while, but this is the best stuff to come from that camp yet, IMO. It's a shame that the price is so expensive and these guys are so rare, but it definitely looks cool. I just can't ever seem to justify the price for the expensive designer vinyls in my mind. This one though, wow, I almost could.

Thanks. Without starting a whole diatribe about price again, this figure is wholly worth the $60. It is hand-cast, assembled, and painted, a is truly the sum of all that labor and love.

The design and colors on this guy are just great looking. I especially like the doll eye and the odd weapon arm.