I picked up this King Kong toy at a little used goods store one day while I was just killing time. The place carried all sorts of stuff from old records to board games, vhs tapes to signs and even old barbershop chairs. It's one of those places where you just never know what you're gonna find. And in this case, I didn't even know what I had found. 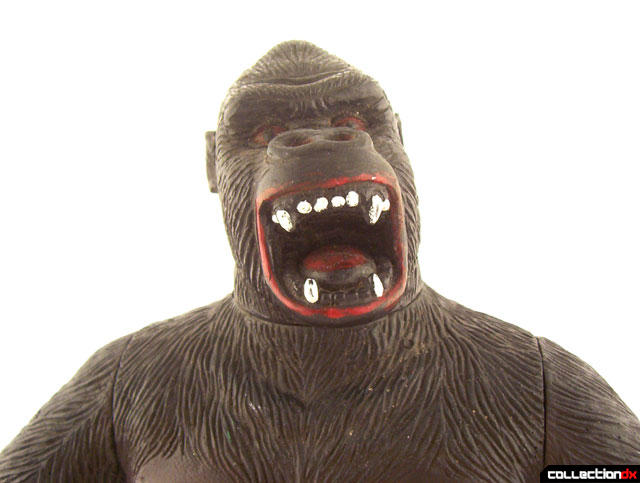 I was carrying around a couple other toys that I needed to get rid of (a Tauntaun for a 12" Luke Skywalker and the Yamato Ideon toy that became obsolete with the release of the Soul Of Chogokin) so I decided to see if there was something there I could trade them for. I found two King Kong items that I had no prior knowledge of, this toy and also an old Jim Beam decanter that was released to promote the 1976 remake. Even though it wasn't the original, I really sort of liked the look of the decanter. I asked the proprietor what it would take to get both items. He said he'd take my two toys in trade, plus $25 cash. Unfortunately, I only had $18 with me.

I decided that I'd just take the decanter and leave this toy behind. I mean, there were no markings on this thing so I just assumed that it was some silly bootleg giant gorilla and nothing that special. I told the guy I'd take just the decanter, but he said I could take both if I promised to bring back the extra $7 next time I was in the area. So I left with both. 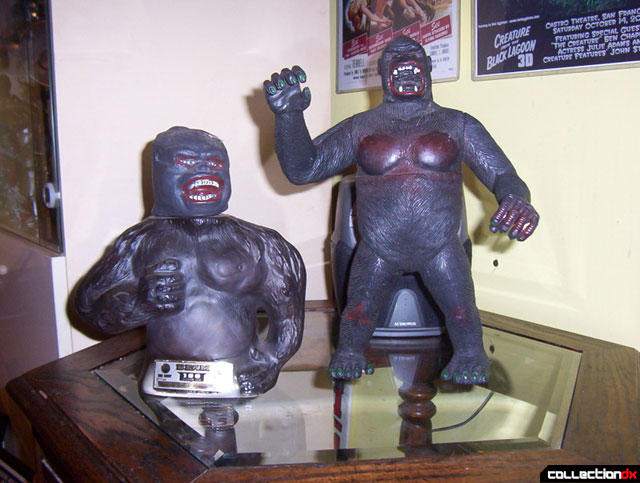 I snapped the above photo to show some monster friends what I'd bought and wouldn't you know it, it turns out that the decanter, while nice, was a pretty common item, but this toy was in fact quite hard to come by! I would have assumed just the opposite. Both of my friends who've been collecting monster items far, far longer than I have congratulated me on my find and not too subtly suggested it would look nicer in their collections! 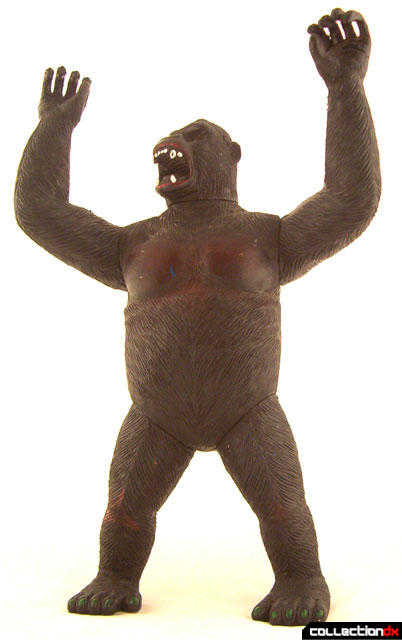 What I learned about it though is that it was in fact not a bootleg, but was made by a company called Imperial. Apparently they made a smaller, more common King Kong but that this size (about 13.5" tall) is much harder to come across. Evidently, it was packaged with a tag around the neck with the name and manufacturer on it.

The toys is a simple one, with just a few points of articulation at the hips, shoulders and neck. It's cast entirely in dark brown vinyl, with red and white painted highlights. There is also green on the fingernails of mine, but the only other picture I've seen of one doesn't have that. Perhaps someone gave him a manicure at some point. 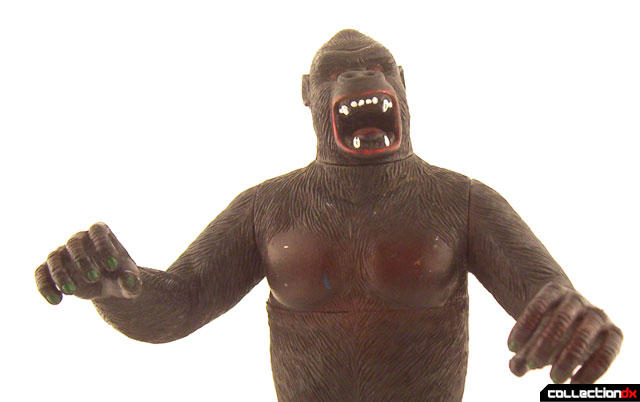 I didn't care too much for this toy at first, but it's since grown on me quite a bit. But is that because it's a nice toy, or just because I found out that it's hard to come by? A little of both maybe...but either way, I'm glad to have stumbled on it! 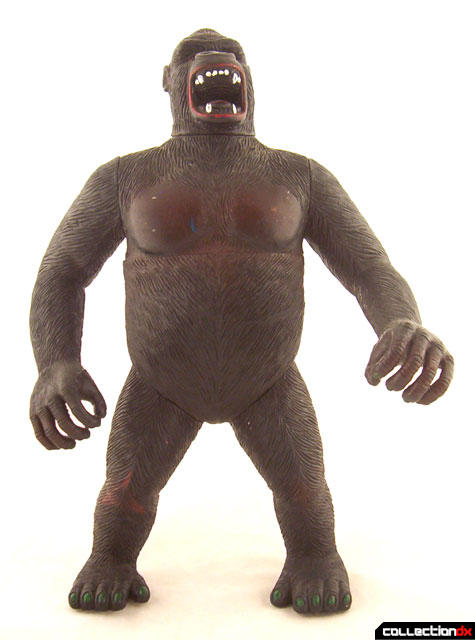 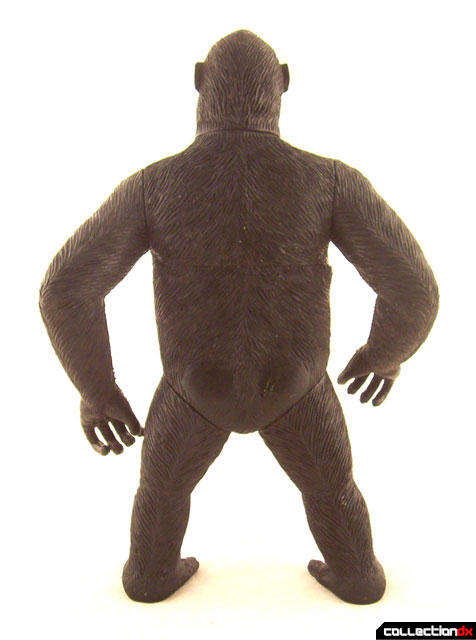 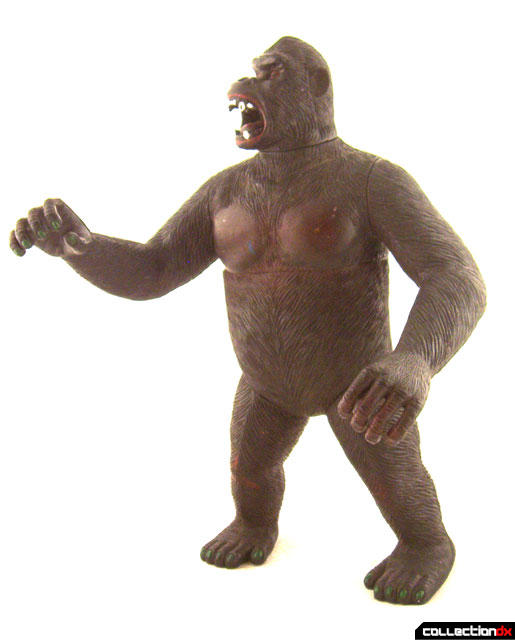 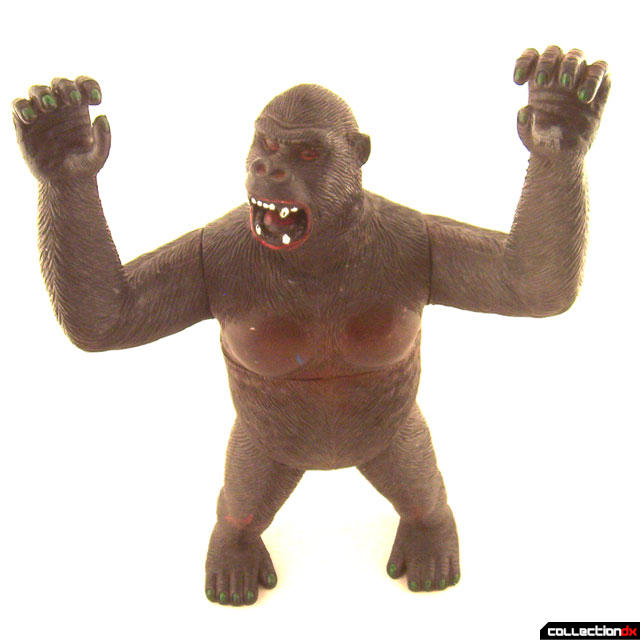 7 comments posted
I had no idea this existed!

That's a fantastic find. I have the Imperial small scale King Kong and Godzilla from my childhood, and I've seen the large scale Godzilla everywhere, but never this. The smaller scale one's cast in black vinyl, with no Imperial monster lipstick, and is in a far more reserved pose. It also has a distinctively large, bare set o' butt cheeks.

How much was it being sold for, or was it set to be haggled over?

The guy was asking $20 for the Imperial and $45 for the decanter. Seems like it would have made more sense the other way around.

In addition to this, one collector remembers an Imperial Rodan, too. It's discussed here.

Imperial never, NEVER produced a Rodan. That guy in that thread is going off of decade old memory, probably just saw a generic toy or an actual Rodan toy (but certainly not from Imperial) and his memory is getting jumbled together...... how does a single guy remember but not another collector on Earth? ESPECIALLY monster toy and kaiju collectors.... Also, I have various paper materials and prototypes from Imperial from that era and before, none of which features a Rodan, whereas Kong and Godzilla are rampant in materials. Not a single "Imperial Rodan" has ever come to light. It does not exist, would be cool if it did, but it does not.

I agree about the Rodan. And I'm not even convinced this Kong is truly from Imperial. Is it featured in any of the materials you have (which I'd love to see, btw!)?

Thaaaaats why it's great to cruise real, brick and mortar, funky collectable shops now and then. Lookit what'cha got! By the way, any chance of a review on the Toy Island, Universal Monsters build-a-Frankenstein set? I just saw those in K-B. Thanks for sharing a cool find Dave.

Y'know, I just heard the other day about those being on sale at KB. To be honest, I've only held one in person (the Mummy) and I really didn't like it. I've got a few lines out fishing for other things I'm looking to buy now so they are not high on my priority list at the moment. I might get them, but I don't wanna promise either...

Yeah, I wasn't super-impressed with the Toy Island Mummy either...something about that rubbery PVC that turns me off, even though the paint apps were pretty good. On the other hand, the Creature from the Black Lagoon from this series was given to me as a gift and I love the hell outta that thing.

The problem is, I can't tell whether I love it because it's legitimately a good toy or because of my blind gillman adoration! :P