Hokuto no Ken (Fist of the North Star) is one of my favorite shows. I mean, I must have liked it enough to watch all of it, right? With all the crazy martial artist running around, all with their own unique gimmicks I find that the school of Nanto Seiken is the most interesting. As much as exploding people's heads (and other parts) can be, slicing people up like a living blade is just downright cool.

Rei is one of these practitioners who uses a specific style called Nanto Suicho Ken. With it, Rei is able to slice almost anything with a wave of his hands. Easily one of my favorite characters. For the 25th anniversary of the franchise, Kaiyodo is releasing several Hokuto No Ken characters through their Revoltech Revolution line. How does their Rei measure up? Let's find out. 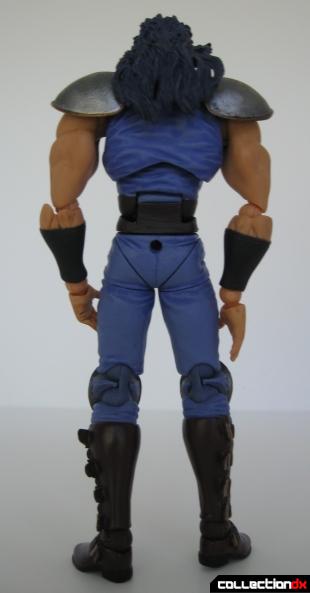 From the rear we can see the stand mount and some more of his Revoltech joints. Rei has thirteen Revoltech joints in total. They are found in his neck, shoulders, shoulder pads, elbows, wrists, knees, and ankles. He has three sets of hands, which includes a pair of fists, and two sets with his fingers splayed out in slightly different ways. 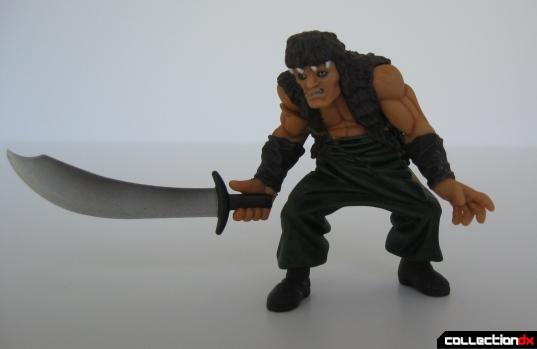 Rei's largest accessory is this Fang Clan midget. This guy was originally included in a much older Rei semi-fixed pose figure. When Rei is introduced to the story, the Fang Clan are the current antagonists. Like any good tribe of post-apocalyptic thugs, the Fang Clan employs small guys for the purpose of leaping off the backs of bigger guys. Fang Clan guy comes with a sword and an axe, which he can wield in his right hand. 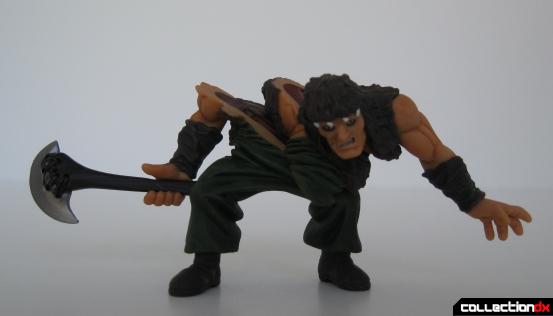 This little bugger's only feature is some sliced and diced action. The sliding action isn't particularly smooth, but the overall effect is nice. 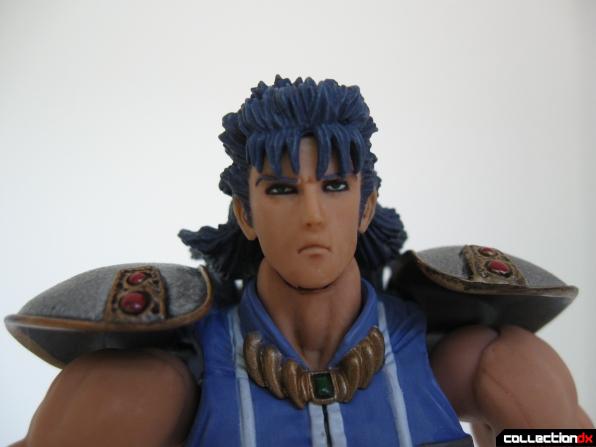 Up close, the detailing is readily apparent. Lots of subtle shading around his skin, clothing, and hair along with the excellent detailing in Rei's outfit make for an eye catching figure. 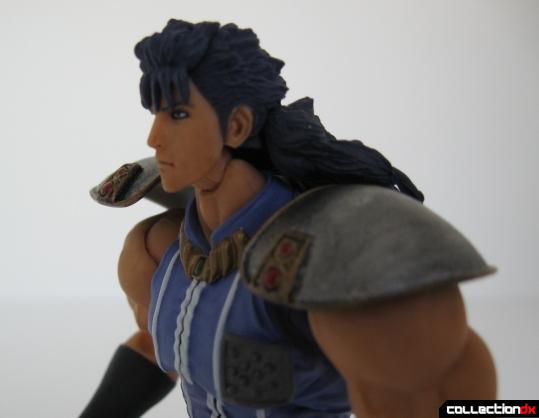 In profile we can see that Rei is rocking an epic mullet worthy of John Stamos. Also note the textured look of Rei's shoulder pads. Up close it has the look and feel of embattled metal. 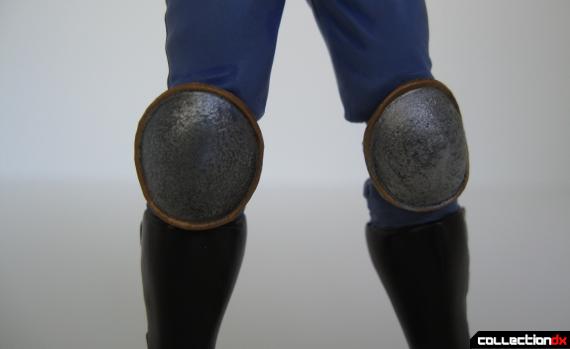 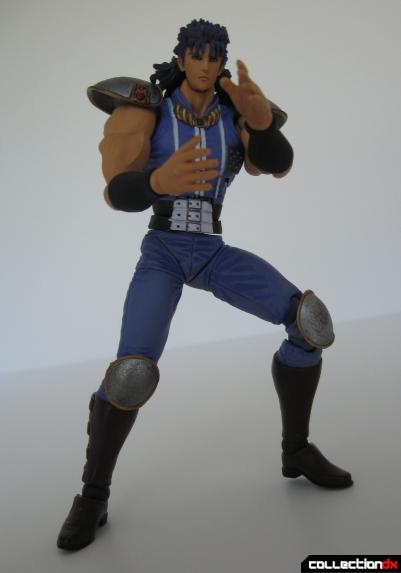 Rei poses as well as any Revoltech figure. The toy includes a small leaflet that suggests that you should use pliers to rotate all of his joints to remove the initial stiffness from assembly. I find needle-nose pliers with electrical tape around the ends works well for this. Kaiyodo also suggests using their patented Revolpliers, which are designed to grip Revoltech joints. 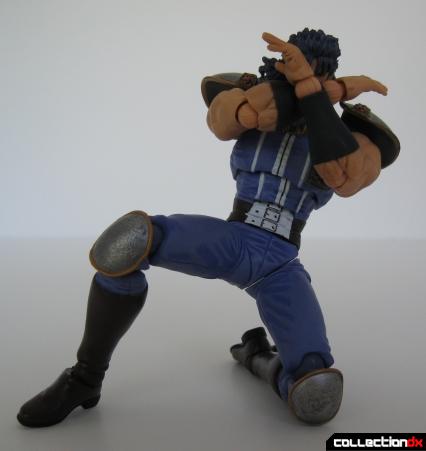 Perhaps my biggest complaint with this figure are the old style Mono-shaft joints in his hips. They do not offer a full range of motion, and while they do not stand out as much as the Revoltech joints I just find them awkward. Putting Rei in a natural pose can be difficult with these joints. 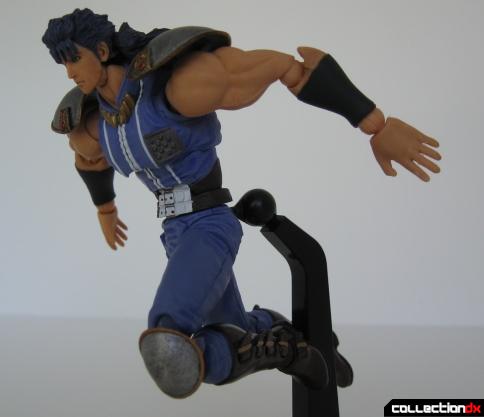 Rei comes packed with the ubiquitous Revoltech stand. This may or may not be the stand that comes with Rei. They're mostly identical so it doesn't matter anymore. 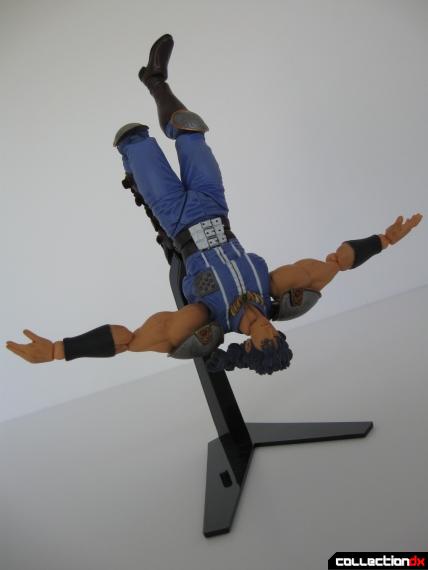 As you can see, Rei stays secure on the stand in any position. 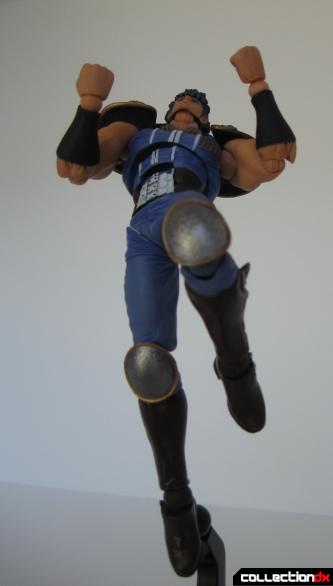 If you're really ambitious, you can plug Rei's right foot into the Revoltech joint on the stand to make him leap even higher. This is not especially stable and takes some time to balance. 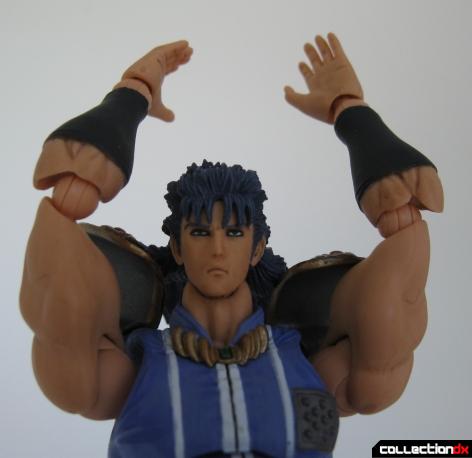 The joints in his arms in addition to the jointed shoulder pads allow Rei to perform many of his classic moves. 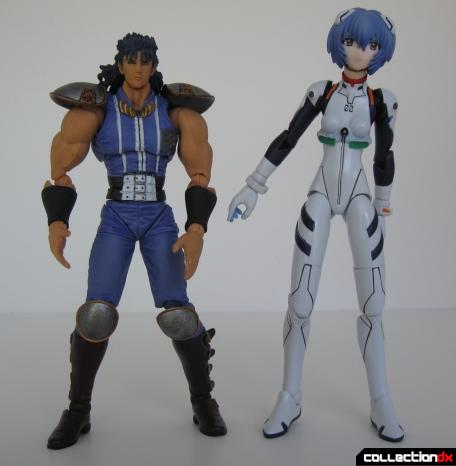 This is just a silly comparison. Although I must admit Rei looks a lot bigger in photos than Rei usually does. 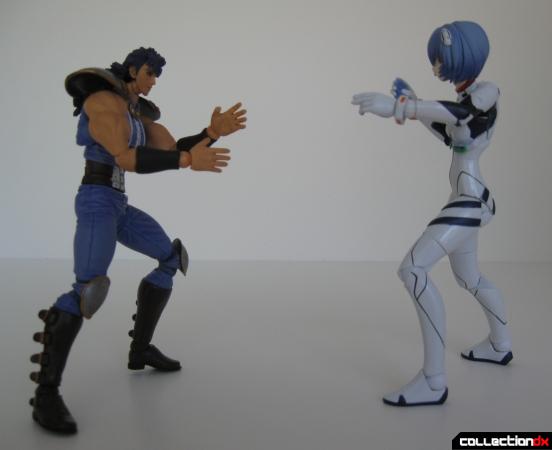 The CollectionDX debate has escalated

Overall, Revoltech Rei is an excellent figure. He looks great and poses really well. Really a top class action figure that is quite above some of the regular Revoltech toys in terms of execution. Kaiyodo has also released a white haired version that reflects the later parts of Rei's story. I'd be interested in an TV show colored version, but that's probably not going to happen. Truly a toy that is as graceful as a swan on the water.

The add figure who gets sliced up makes me want to purchase this.