The last entry in the first wave of B.F.F.F. International monster figures is this set of 3 aliens from "Invasion Of The Saucer-Men". Unlike the previous releases, from I Was A Teenage Werewolf and I Was A Teenage Frankenstein, these figures are not 12" in height. Instead, they are a more Mego-like 8" tall, to better represent the little green men of the movie. Unfortunately, although they are smaller, they really do not have the proportions of the creatures from the movie. 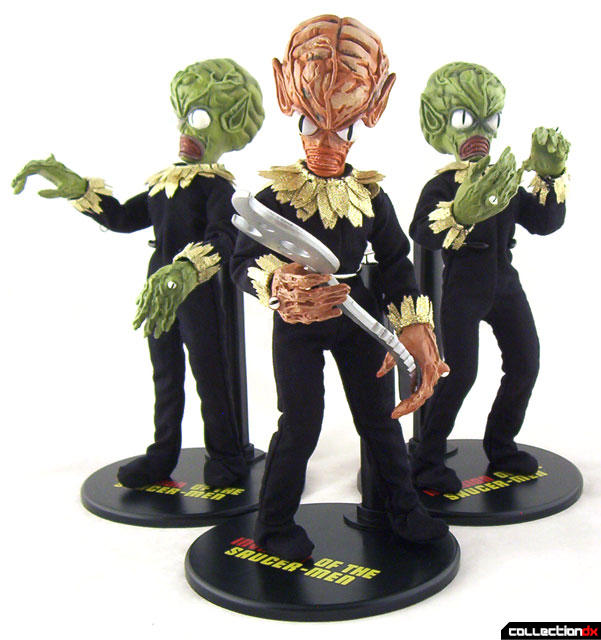 This has been a point of contention with some collectors and I myself am sort of on the fence about it. On the one hand, yes, I do wish that they were more accurate to the movie. But on the other, I can't help thinking that if these were vintage toys, no one would complain and would in fact hunt them down like dogs. I guess the difference is that vintage toys were made for kids to play with and therefore accuracy was less important than with these modern toys designed to be admired by the adult fan. You're mileage may vary. At the end of the day, Saucer-Men are cool and I'll take whatever I can get, I guess. 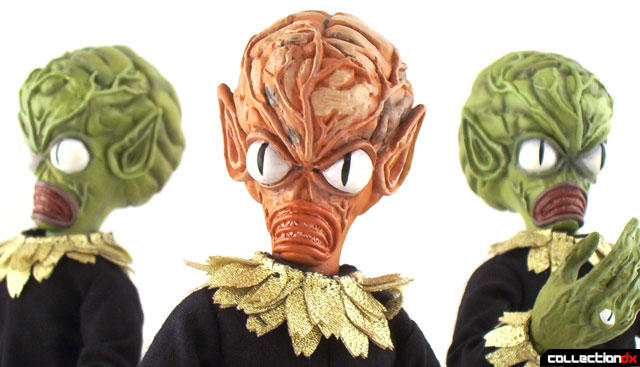 Besides the poor proportions on the bodies, I think I like most everything else about these figures. The visible portions of their bodies are well sculpted and the paint is mostly pretty good. The only place I find it to be lacking is on the head of the "red" alien, where it looks a bit amateurish. Instead of trying to add some depth of color there, I think they probably should have left well enough alone and just went with the flat color. 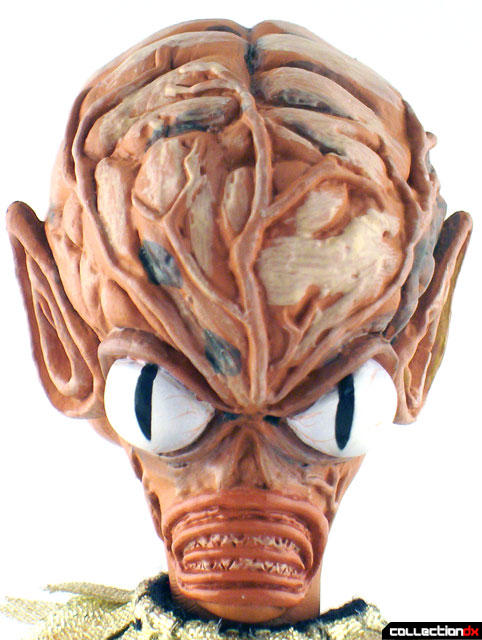 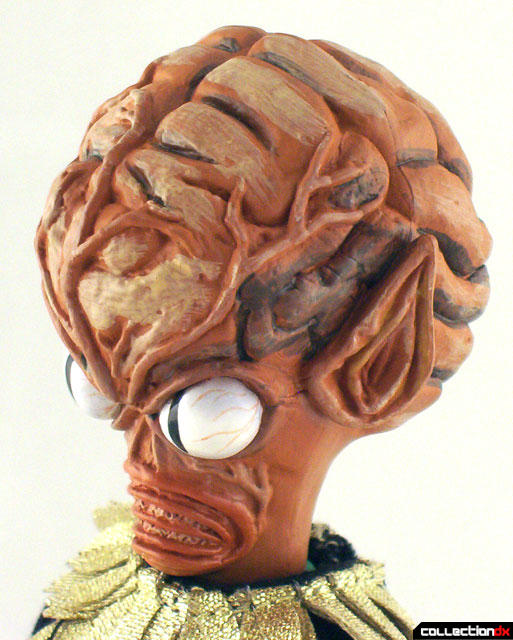 I think the green headed aliens look better, despite, or perhaps because of, their simpler paint jobs. 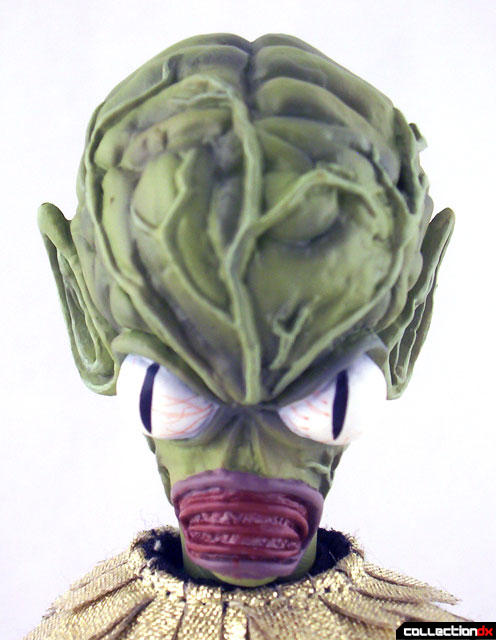 Actually, the "red" alien might be cause for some concern in general. I could be wrong, but I don't think there was ever any mention of any of the aliens being that color. Perhaps they just wanted to include one that was a bit different simply for the sake of variety, and honestly, I'm ok with that. I don't mind them taking a little artistic liberty, if in fact they did. Lord knows the world of Japanese kaiju does so since I collect those too, I'd be a bit of a hypocrite to complain about it here. But some may not like to see it. 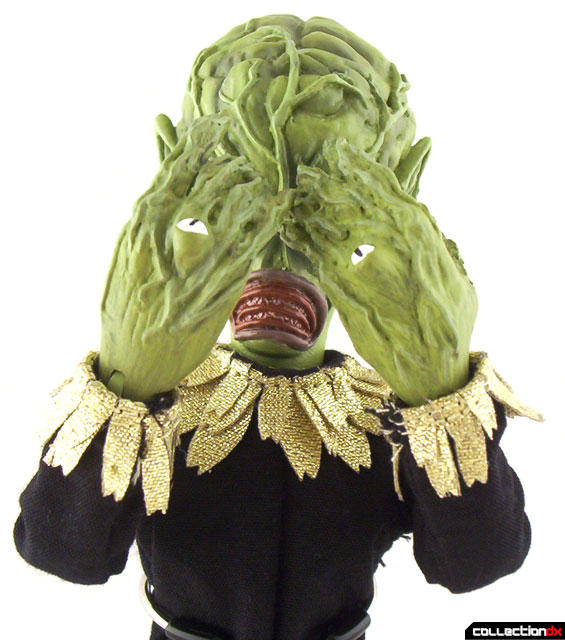 The costumes of the characters are pretty neat. The majority of it is just a flat black one-piece suit, but the necks and wrists are layered with some golden glittery "feathers" for a pretty cool looking effect. Each suit has a zipper down the back if you need to get at the body beneath. If you do, you'll notice why the alien bodies are not exactly like in the movie. It's no surprise that it's a cost cutting measure and these bodies are from pre-existing figures. The copyright stamped into the back of the toys says "2001 7thsttoys.com Made In China"!

Although I didn't bother taking pictures of each figure holding it, each one does come with it's own weapon. You can position it in the hands to hold it, but none of them can actually grasp it with any stability and there's no way to attach it either. 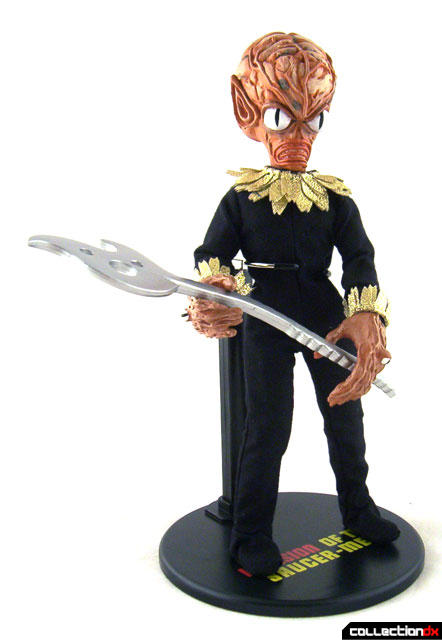 These figures come in a large box with the original poster art on the front. The box measures 16"x 13" x 3" and the lid opens up just like most 12" figure boxes. Two original lobby cards are pictured on the interior of the lid. 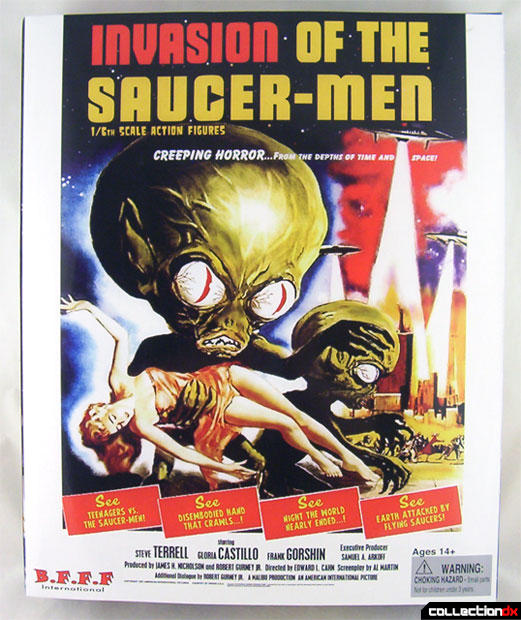 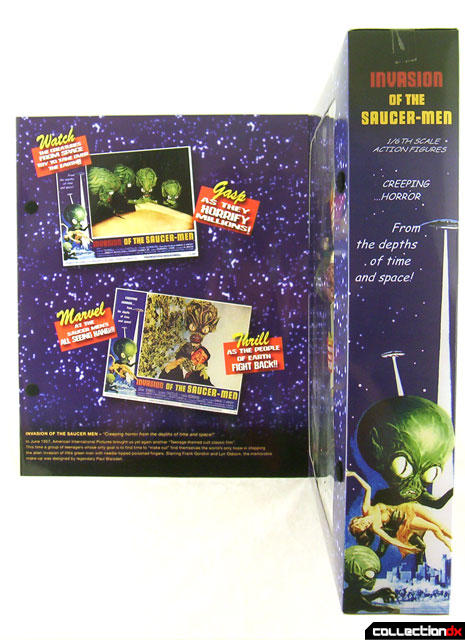 One thing to be aware of in advance is that mine did NOT have any plastic ties around the figures. I just assumed there would be and instinctively flipped the tray over to start untying them and all 3 figures just dropped out onto the floor! 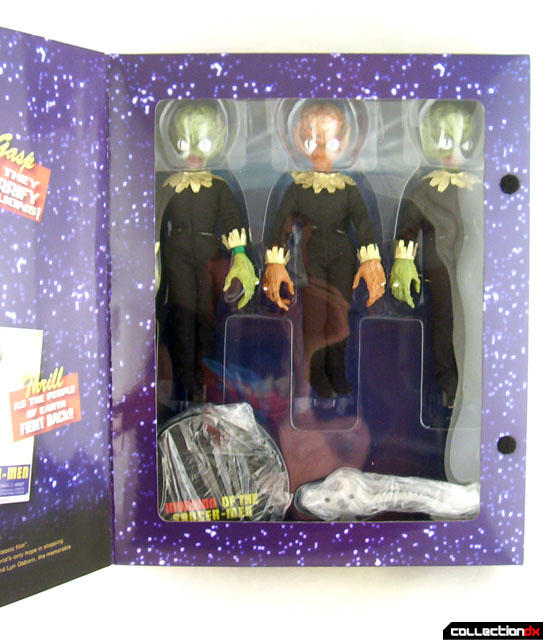 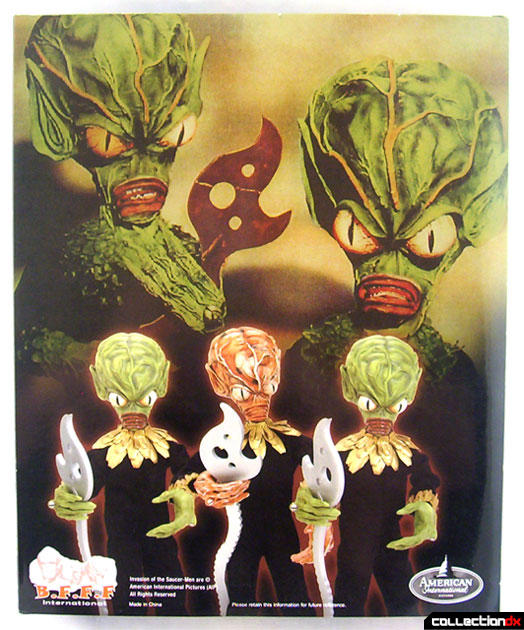 The set comes with 3 doll stands to help you display the figures in your collection. Each stand has "Invasion Of The Saucer-Men" printed across the base.

Overall, I'm happy with this set. Some might argue that it's a bit overpriced at $79.99, but considering the limited production run (only 500 pieces) from a small company and the fact that you get 3 toys in one set, I can live with it. If the poor proportions on the bodies is just too upsetting to you, then I would suggest you get the recent statue from Ultratumba Productions instead, unless you just must have a toy instead of a statue. If that's the case, then... well you're screwed.

Dude, I dunno...those proportions are WAY off.

They basically look like normal human bodies with big alien hands and a head. Booo.

Amok Time has uploaded a pretty amusing stop motion video of these guys..

No artistic liberties taken (aside from the Green aliens) color stills were found a few years ago and the alien costumes were indeed painted the peachy-orange color! ;)