Like many young people growing up in the northeast of the US during the 80's, I was exposed to Jim Terry's Force Five series of cartoons. I remember so clearly the joy of getting up early before school to catch the latest adventures of these Super Robots, imported from Japan and dubbed (often miserably!) into English, defending the Earth from insidious invaders every weekday morning. Absolutely nothing could beat the thrill of your favorite hero piloting a huge robot, shouting out its weapons' names as he vanquished the baddies! Ah...those were the times!! I wouldn't be exaggerating if I said that the experience was like going to church everyday! You just did it...there was no question! 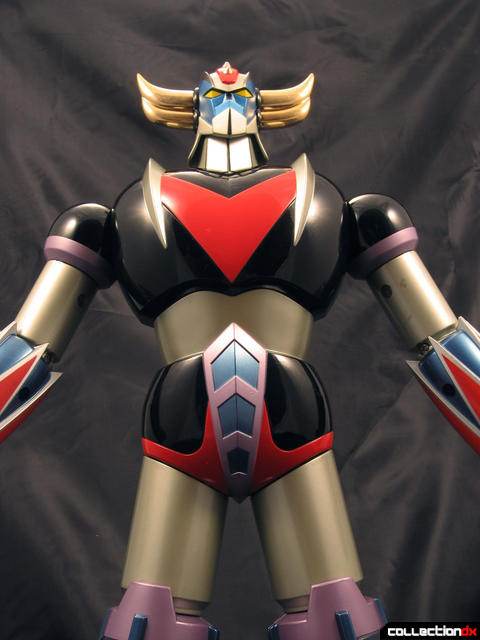 Of all the robots, Grandizer, was my favorite. Was it that the pilot, Orion Quest--or Duke Freed in Japanese--displayed a conflicted pacifist nature and his inner turmoil at having to resort to violence once again to protect his loved ones? Was it that this hero was actually an alien from a slaughtered world living among humans, constantly struggling to fit in, struggling with his violent past, and struggling with his secret identity?

Was it his nifty black costume?

Who knows? But I was definitely hooked!

Early in 2006, when Marmit announced that their awesome Daigokin line was continuing with a third mold, Grendizer (the original Japanese spelling of the character), needless to say, I was intrigued. This line, "Daigokin", consists of nearly completely solid diecast figures whose sculpts are based closely on Marmit's existing successful line of vinyl robot figures, "Fierce Legend of Super Robots" (Click here for an example of a FLOSR!).

While they appear nearly identical to their FLOSR counterparts, the Daigokin figures are often slightly taller and beefier in proportion and they usually offer improved articulation.

Well, first off, I gotta admit that I was hesitant about purchasing the Daigokin. I had the FLOSR, but I wasn't overly-thrilled with the sculpt. I love FLOSRs in general, but the Grendizer mold, in particular, has overly-beefy arms that also seem too long to me. Furthermore, the neck looks crooked at an odd angle if you look at it from the side. Yeah, I know: I'm picky...but, hey, if you're gonna make an "anime-accurate" sculpt of a character--especially my beloved Grandizer--ya gotta do it right!! Plus, the pricetag for the Daigokin is reasonably off-putting. Did I really want this sculpt I already had in the FLOSR...for that much money?

Well, y'know, in the end, the previous statement concerning diecast content in these toys won out in the end. I mean, really...for a hardcore Grandizer fan, is there actually a "choice" involved here? ;)

Aiight, so let's start with the box! I was pleasantly surprised to see that the cardboard Marmit used for the box is extremely thick--thicker than any cardboard I've ever seen used for a toy's box. The box finish is very glossy and the graphics are wonderfully vibrant. 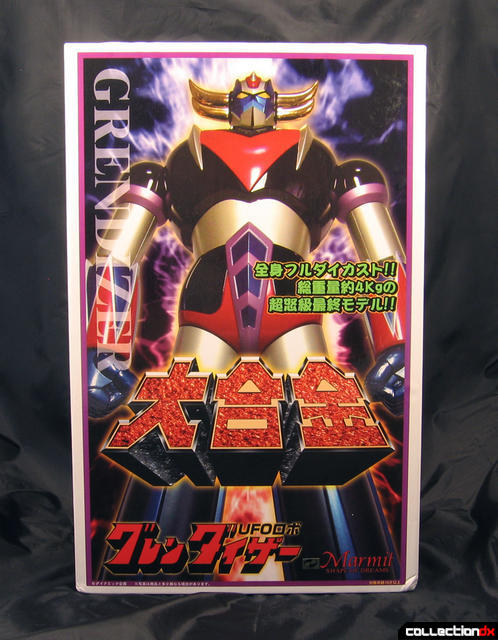 Upon removing the lid, the figure can found between two huge, satisfying slabs of styrofoam. But before getting to the Daigokin, a repaint of the 4-inch Grendizer gokin Marmit released some years ago (also based loosely on the FLOSR sculpt) rests in a recess in the top half of this styro-coffin. It's dark silver with gold and yellow accents. Quite nice actually, but not a huge deal for me. 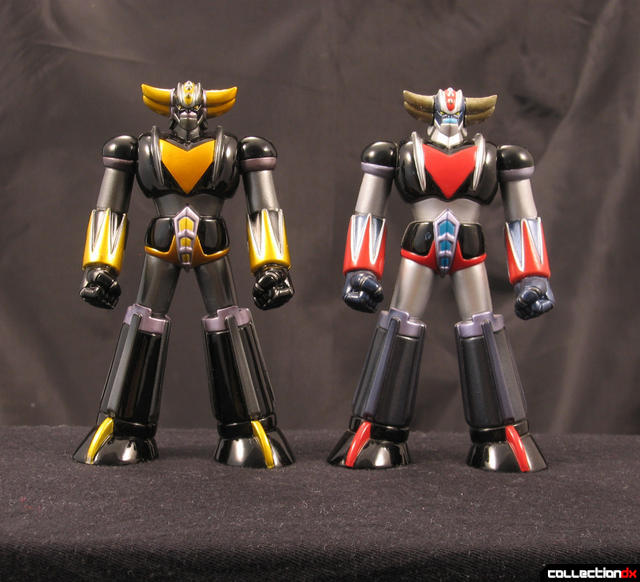 Small gokin repaint, along with the original.

The styrofoam halves open to reveal one helluva toy. Figure, in a thin, clear plastic bag (not shown below), is nestled in his custom-tailored bed...no instructions, no catalog--no accessories or paperwork of any kind. 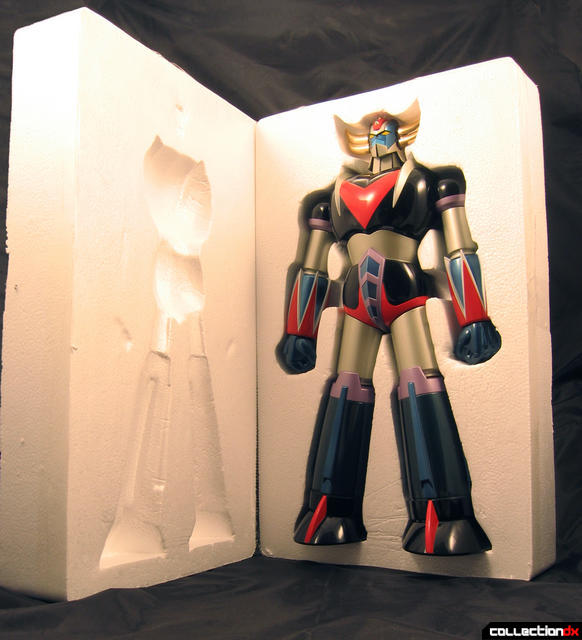 This figure is 17 inches tall. It weighs somewhere in the neighborhood of 7.5 pounds--that's FAR and away the most massive toy I've even handled! But, y'know, it's not just the weight. Sure, when you pick it up, you risk straining a ligament or two in your wrist...but when you fly him around the room, the little mechanical bits in the joints and the separate metal plates on the bottom of its feet all clink and clatter lightly against one another, creating a melody of different metallic sounds. Oh...this is QUITE satisfying to the ears! You get the impression that this is an actual robot you're handling! 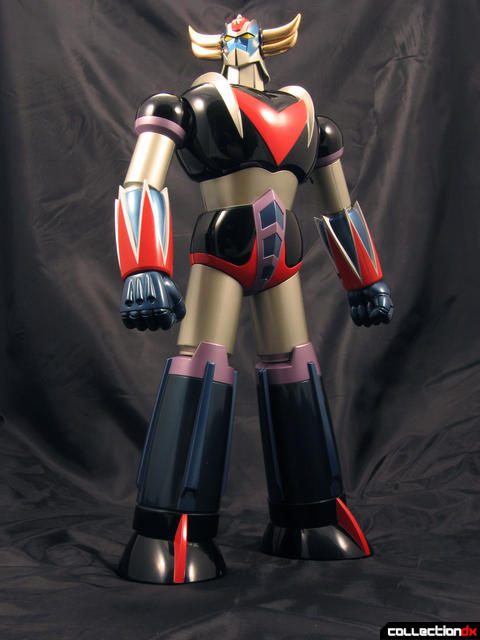 The toy stands just over an inch taller than it's FLOSR counterpart: 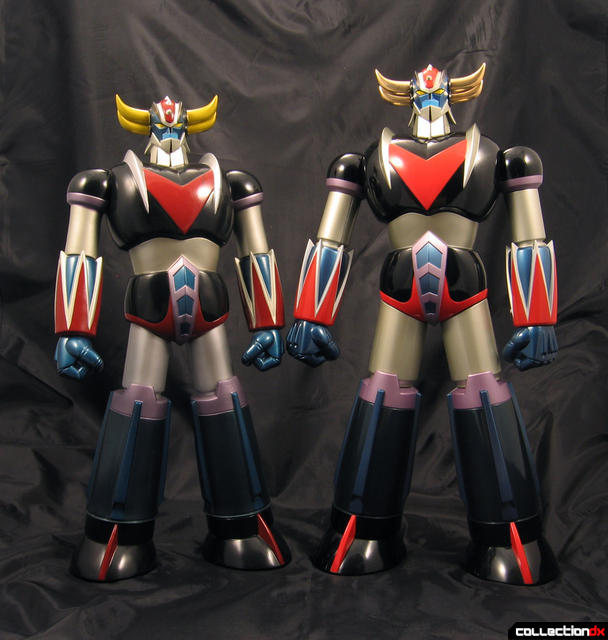 Also, as others have pointed out, there are interesting modifications to the existing FLOSR mold: notice above how the Daigokin's thighs are a bit thicker, while the waist seems to have shrunk. The upper torso on the Daigokin also seems to have been widened, adding to the more triangular physique. 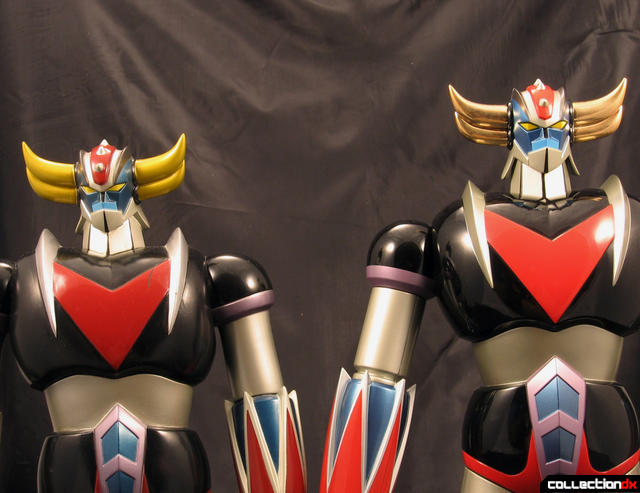 Besides the visual changes, I was VERY pleased (and surprised!) to discover the articulation added to the Daigokin. Now, the head turns and actually tilts backwards--no more crooked neck! Also, the shoulders can splay outwards a bit, also minimizing my complaint about the gorilla-arms. And the real treat with the shoulders is the extremely loud clicking of the detents or "ratcheting" in the joints when they swing forwards or backwards! Finally, Marmit added elbow joints that can swing about twenty degrees back or forth. Not the greatest flexibility in the world, but it certainly beats the FLOSR and can at least make for some interesting poses. The other main FLOSR swivel joints are present: upper arms/biceps, wrists, hips, and knees (though, just as with the FLOSR, the toy's basically a brick from the waist down). 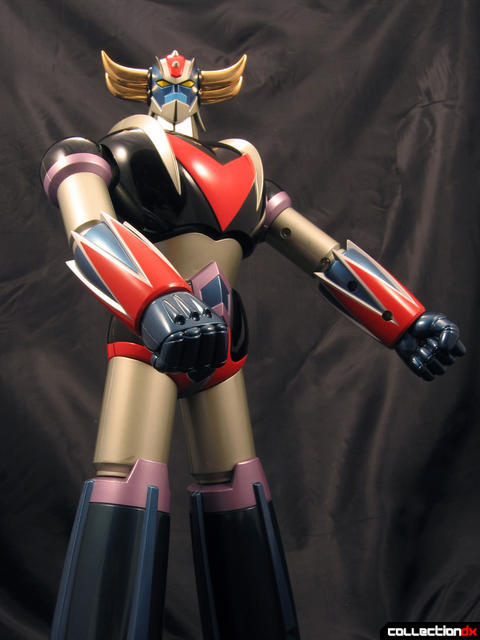 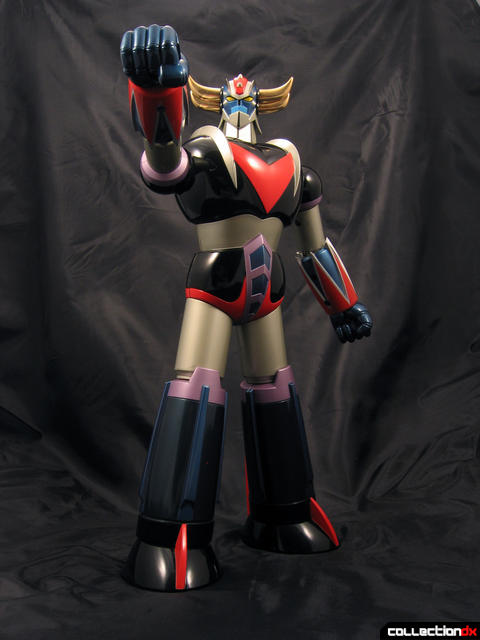 Not a whole lot else to say about this toy. No accessories or gimmicks--other than its sheer size and mass. Again, it's quite pricey and certainly not for everyone. Still, it's nice that Marmit is bold enough to make something as limited and niche-oriented as this in a time when megalithic toy companies like Taka-Tomy and Bandai are so concerned with focus groups, marketing due diligence, and their bottom lines. 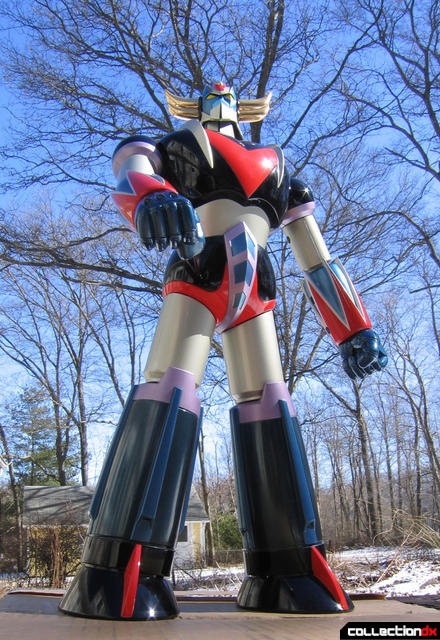 For me, it's Grandizer. And in the final analysis, that's all I need to know. Marmit's Daigokin is not my favorite rendition of the character--the Popy Jumbo and DX Chogokin are simply timeless and easily among my favorite toys of all time--but I'm still quite pleased with it.

Remember, I'm picky! I certainly don't have every Grendy toy out there, but the Daigokin definitely gets my stamp of approval! 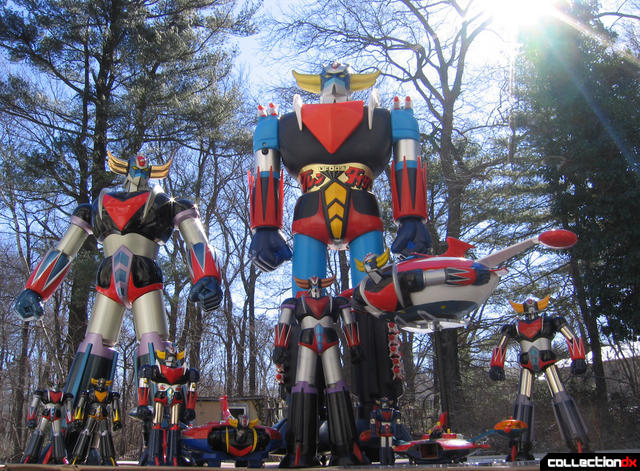 Part of the fam, the Daigokin fits right in!

I too purchased this awesome Super Robot to complete my "solid diecast collection" of Go Nagai's Mazinger family. However, I feel that for the money it is selling for, Marmit would put a little more attention to detail in the finished product. For example, my Dai Gokin Grendizer has a couple of spots of "purple" paint on the inner thighs and the "crotch" area. Also, the black paint where the horns meet the head is chipping off. But the thing that really dissapointed me was the 1/2 inch scratch it came with (front - left shoulder). I thought it would be a lot better finished than it's predecesors, Great Mazinger and Mazinger Z, but the quality is actually not even close.

I was also hoping it would be taller...

That's a bummer about your paint issues. But now that ya mention it, if you take a look at the "articulated.jpg" right under my paragraph about the toy's articulation, you can see a very subtle dark grey spot on the right thigh just to the side of the purple knee. As far as I can tell, that's the only paint flaw on mine. Sucks that you got a lemon...hopefully, that's a fluke and others won't have such issues...

I don't have the predecessors, but I've heard from some people that they've had red paint bubbling/chipping on the pilders. Hmmm...

Alright... I was hesitant when you told me you where purchasing this Sanjeev. However, after seeing the pics you took and reading the review I gotta say I'm impressed. If a toy could ever "look" heavy, that one certainly does. The colors certainly pop and the figure definitely looks fierce!

It's bangin'! Definitely come by and check it out!

And, yes, I'm praying they do more FLOSRs in the Daigokin format. There are SO many amazing sculpts in that line (the Getter G's, Danguard A, etc.). I'll leave the Daigokin Gaiking to you! I'm happy with my yellow-belly custom (which I should review soon!).

You're correct: this is the first use of the new studio. Pretty nice, but not sure how I feel about the artsy backdrops (it came with blue, red, black, and white). Nekrodave said that draped look reminds him of a yearbook photo! HA!!

RE: your backgrounds - you can use an iron to iron out the wrinkles, and a lint brush to get rid of debris.

I love this Daigokin, I heard about it from our local Anime models shop owner but I didn't realize it would be this cool.

I'm a big Grendizer fan, and from what I understand the Force Five Grendizer series was limited to only 26 episodes, you didn't get to see up to 74. The series is so good that I still watch it and get into it to this day.

Most people in Kuwait and the middle east know Grendizer, he's just so popular here.

I have a few Grendizer and Mazinger SOC photos on my Flickr page if you'd like to check them out.
www.flickr.com/gtmq8

Thanks for the really cool article and have a great day.