Yeah, well, I'm not gonna lie to ya: You're not gonna see much Naruto coverage on this website. We do toys, not anime in and of itself. Least of all insipid cartoons about "ninja" with weird powers. But I'm not bitter...

Okay, yeah, I'm bitter. Here's a little digression folks; I beg your indulgence. I hate Naruto. I never knew I hated Naruto, in fact, until I went to this: my first San Diego Comicon. One of my missions was to photograph cosplayers...especially if they were too fat, too thin, too whatever to be dressed as whatever they were supposed to be. Sure...no problem, right?

Yeah, that's what I thought at first, too. It all seemed like a fun plan...until the masses descended upon the convention.

Now, I like kids and as expected, there were plenty of young people dressed as Naruto ninjas at the con. I'm straight with that. That's cool. Hell, I dressed like Skeletor for Halloween one year, damnit.

What drove me bonkers was the ridiculous number of full-grown adults dressed like these idiotic characters!! Oh man...can you imagine what it's like standing next to a 300-pound, unwashed human dressed like one of these!?

Anyway, back to Mattel. Mattel had a huge and rather neat set-up. Their cases were arranged in a sort of maze people could walk through. It wasn't cramped and it wasn't so mind-bogglingly bright and flashy that you risked an epileptic seizure. The bad news? Oh yeah: about 50% of the shelves were devoted to my pal, Naruto!

Moving right along, there were some interesting things to see. The biggest surprise, by far, was the amount of He-Man toys on display (check out He-Man.org for coverage of Mattel's panel concerning the future of He-Man). Apparently, even though the 200x cartoon series was canned and no new toy products were in the pipe, Mattel was interested in not only pushing the dvd release of the 200x show, but also gauging fan interest in a potential movie. Wheeee! 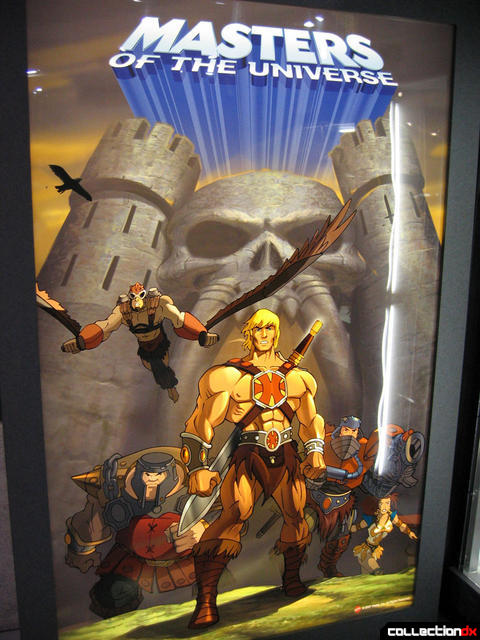 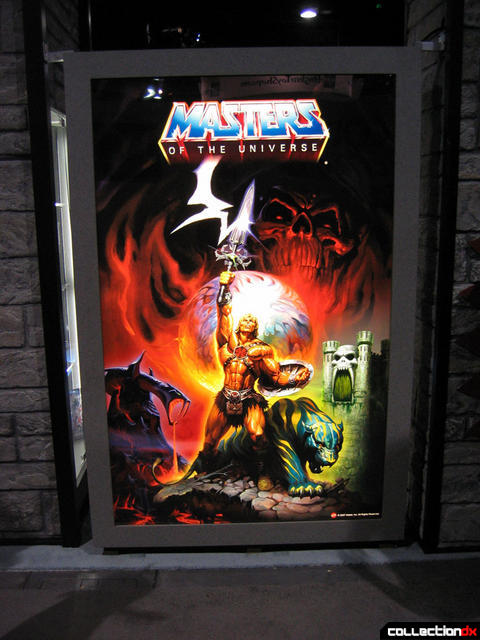 A hint of things to come?

There were lots of old He-Man toys on display, as well as what appeared to be a prototype of a new He-Man figure with an all-new style sculpt by the Four Horsemen (the guys responsible for sculpting the toys for the 200x series). Thanks again to He-Man.org for posting pictures of the prototype I apparently missed! :P Prototype 1, 2, 3, 4, 5. 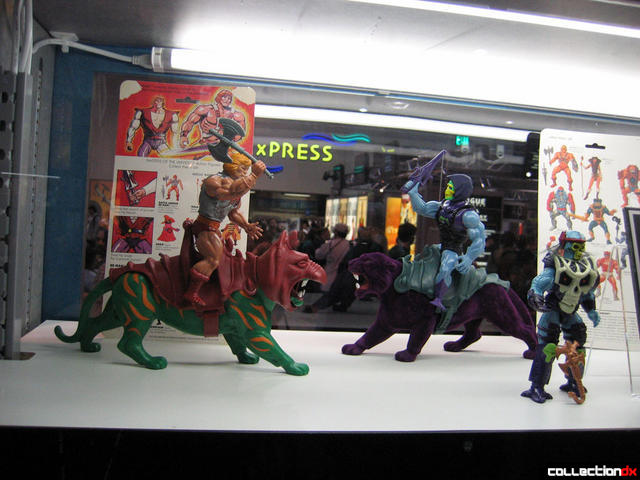 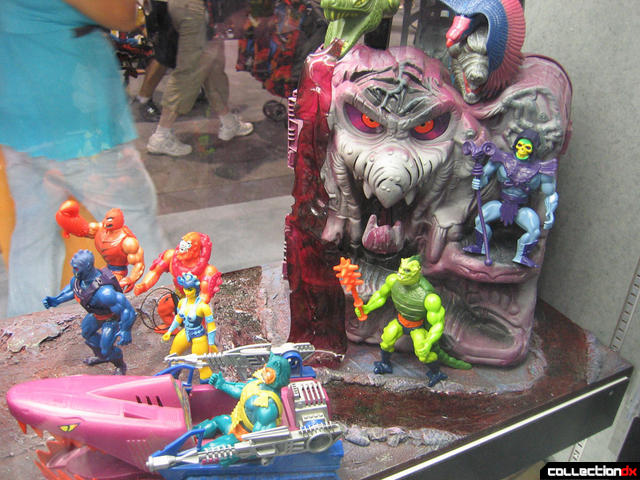 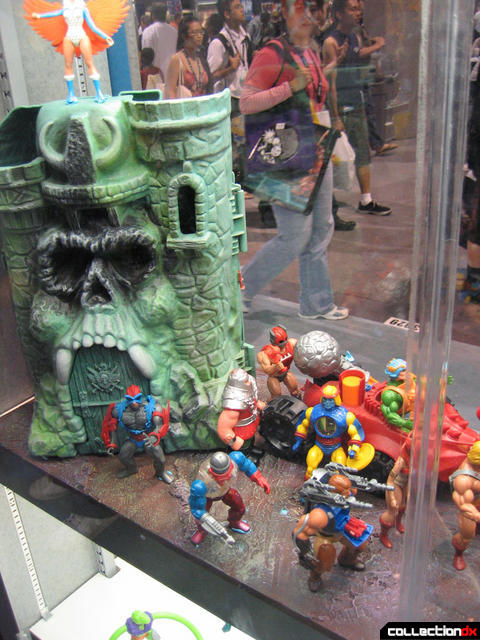 Next on tap for Mattel was their DC Comics superhero figures. I was never all that into DC when I was younger, so I don't know much about some of the lesser-obvious characters, but I do know one thing: toys. Mattel apparently has a line of large-scale, highly-detailed figures of some of the more iconic characters (read: the ones *I* actually know!). 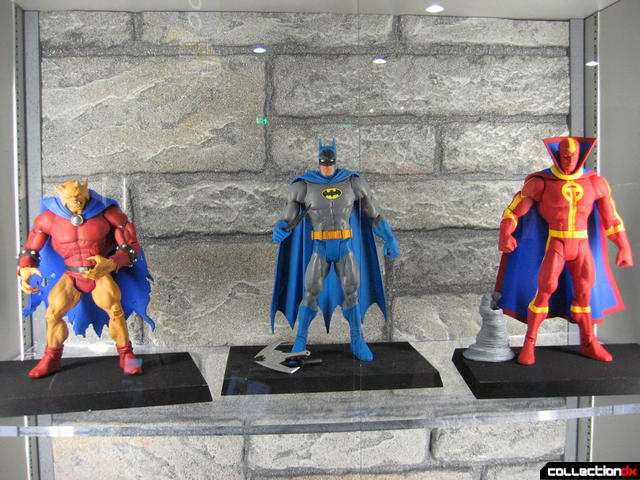 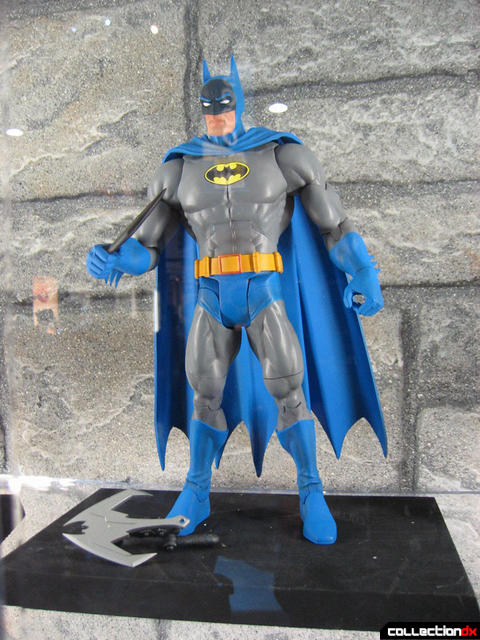 As far as I can tell without actually holding one, they're a bit taller than Marvel Legends Icons and their sculpts are actually quite a bit more impressive. In addition, a smaller-scale lineup seems to be in development. These were bigger than standard Marvel Legends, but again, their sculpts seem to be superior to Hasbro's line. 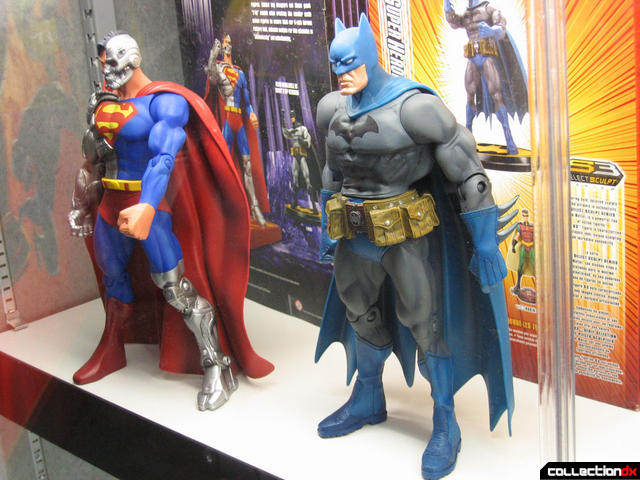 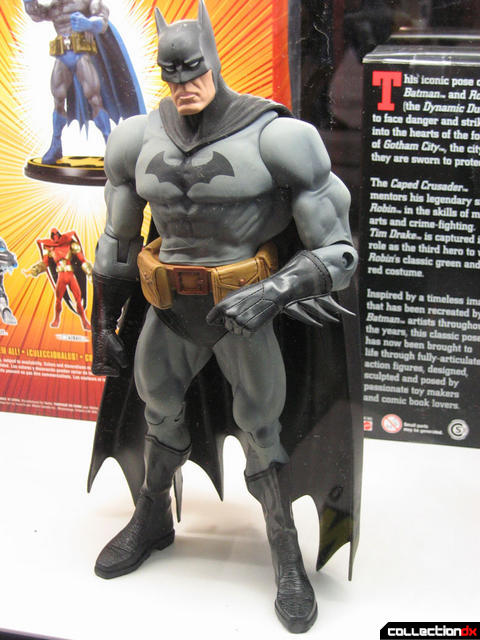 With details like this, I'll definitely be paying attention to Mattel in the near future...

Wrapping up, there were very sofubi-esque large-scale figures from the Justice League Unlimited cartoon series. There were some really cool Batman Hot Wheels offerings. And lastly, various Speed Racer merchandise in support of the new movie.

The last bit of news is unfortunately bad: there were NO new Avatar toys whatsoever. If you follow CDX closely enough, you'll eventually realize that Avatar's a bit of a favorite around here! Anyway, I made sure to ask one of the reps about it, and they confirmed. The good news is that the fourth season is, in fact, coming out, though I missed Nickelodeon's Avatar panel (though there's plenty of coverage of the panel elsewhere, 2). We'll see how the new season pans out and hopefully whether new toys will be announced...

I'm definitely more of a Marvel fan than I am of DC, but I do love Batman. Those figures are awesome. With the literal shrinking of the Spider-Man figures, I am definitely looking forward to these.

I'd *always* been a Marvel fan growing up. I never read any DC titles regularly, but I did pick up the odd Batman book or two (Dark Knight Returns and whatnot). Those figures seriously look killer--much better than Hasbro's Marvel Legends Icons. Hopefully, they'll turn out to be robust toys, not just fancy display pieces!

sooo wait will they stop the toy making of avatar after the release of the fire series? or before? because my niece has been waiting for a katara action figure for like ever.