Aoshima has announced a limited edition version of their diecast shin getter 2. This is the Anime Export limited edition, limited to 1500 pieces. Due late October for 13,440 Yen. 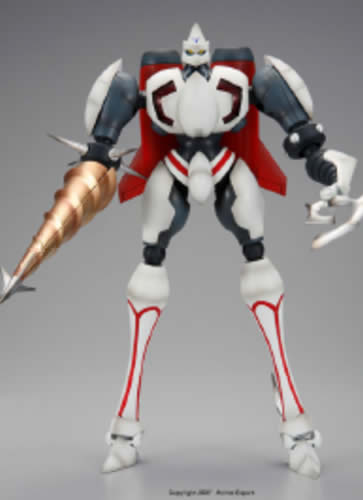 Not to pooh-pooh your pooh-poohing, Atom, but this is actually the FIRST high-quality diecast rendition of Shin Getter 2. Sure, there were Bandai's SoC renditions of Getter 2 and Getter Lyger, but nothing about Shin Getter 2...unless you count Studio Halfeye's super-expensive transforming resin figure.

So, the bottom line is that this is actually a cool thing. Furthermore, the fact that they're making this strongly suggests that they're going to make a Shin Getter 3 figure! A full set of all three robots (not to mention the Black Getter that's already out)? Oh yeah!

Sure the cartoon was a miserable cluster-f*@k...but who cares? The robots were cool! They just need to release a set of the three jets--heavy diecast, of course! ;)