The hugely popular Guitar Hero franchise delivers the ultimate guitar-bending experience and enabling aspiring axe-shredders everywhere the chance to Unleash Their Inner Rock Star. Featuring a wide variety of music spanning five decades, the franchise is highlighted by countless original recordings from many of the most beloved artists of all time.

Represented in the first line of action figures are four of the Guitar Hero game’s most popular characters: 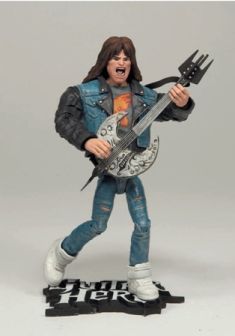 “We have very recently begun creating toys based on video games,” says McFarlane Toys CEO Todd McFarlane. “With Activision, we get to work on arguably one of the biggest video game franchises out there, and capitalize on the wide-ranging demographic that encompasses this game.”

Each figure has 15-18 moving parts. Additionally, a unique guitar is included with each character that is removable and interchangeable with the other figures. Each figure also comes with a sculpted Guitar Hero logo base.

Visit www.SPAWN.com for updates and the all the latest and to-the-minute news.

Grammy-and Emmy-winning producer/director Todd McFarlane, creator of Spawn and the founder of SPAWN.com, is the force behind McFarlane Toys, one of America’s top action figure manufacturers. With an eclectic array of movie, TV and music licensing tie-ins – as well as the officially licensed teams of the NFL, NBA, MLB and NHL, McFarlane Toys has become a leader and redefined the standards within the action figure industry. For complete information on this pop-culture powerhouse, visit SPAWN.com.

Activision maintains operations in the U.S., Canada, the United Kingdom, France, Germany, Ireland, Italy, Sweden, Spain, the Netherlands, Australia, Japan and South Korea. More information about Activision and its products can be found on the company's website, www.activision.com.