Home » McFarlane Toys » 'THE WALKING DEAD' TV SERIES 3 ACTION FIGURES In Stores This Now ...And There Is No Escape!

'THE WALKING DEAD' TV SERIES 3 ACTION FIGURES In Stores This Now ...And There Is No Escape!

In Stores This Now ...And There Is No Escape!

Some of this season’s most iconic characters and zombies have been immortalized by McFarlane Toys. This third figure line, in stores now showcases two new lethal zombie slayers, along with three more decaying zombies from the show.

Now lock your doors and grab your favorite brain-busting utensil, because you’ll swear these figures are really coming to devour you! 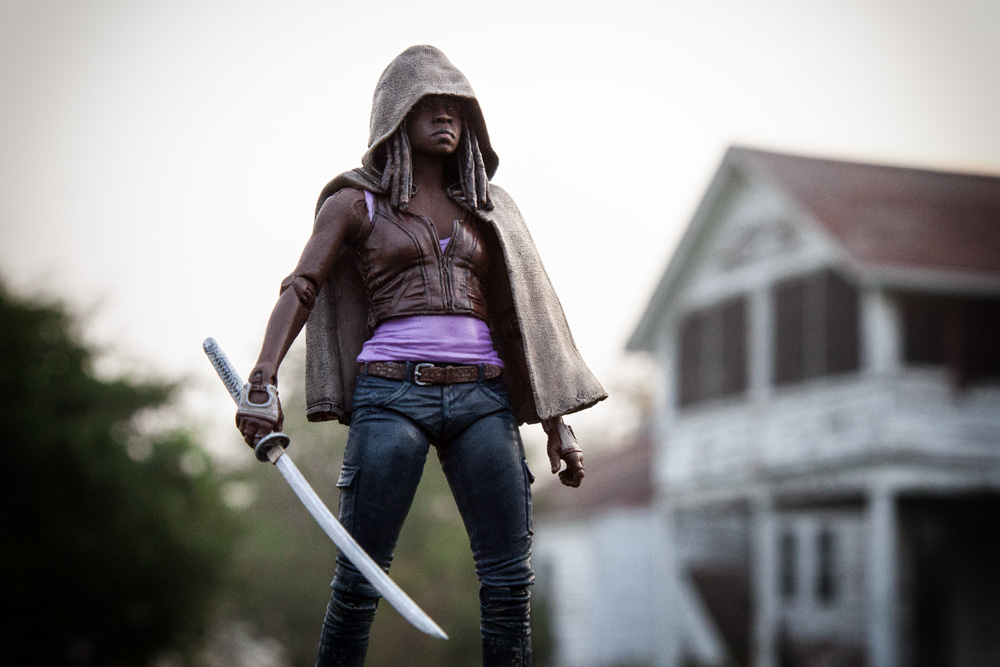 MICHONNE -Michonne is the mysterious stranger who saves Andrea from walkers with her katana blade and two pet walkers in tow. She is a quiet, but fierce warrior. This action-figure comes with 24 points of articulation, removable poncho, and katana sword with sheath. 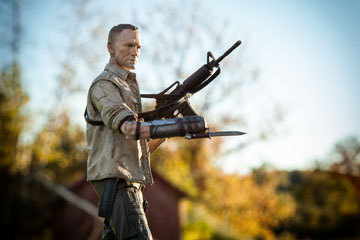 MERLE DIXON - Left for the dead in Season 1 by Rick and the rest of the survivors, Merle Dixon, the estranged brother of Daryl Dixon, make his full return in Season 3 and this time he is re-armed and ready for action! This action-figure comes with 20 points of articulation, prosthetic arm with bayonet, assault rifle, pistol and knife. 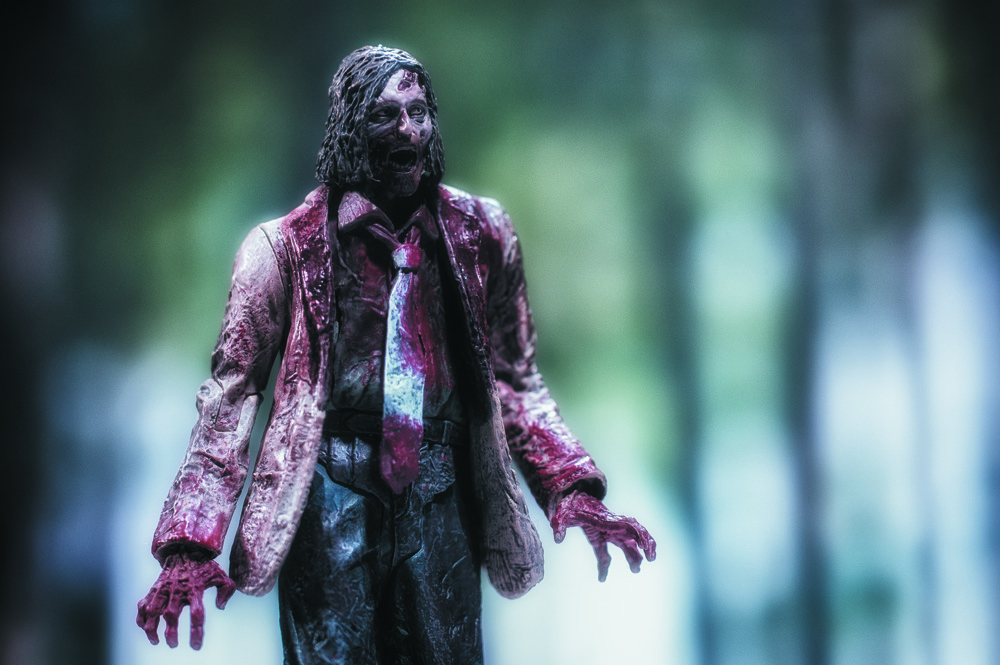 AUTOPSY ZOMBIE - In a desperate attempt to find Sophia, the Autopsy Zombie becomes another victim of Daryl’s crossbow. In one of the most gruesome and riveting scenes from the series, Rick and Daryl perform an autopsy on this newly fed zombie to find out the contents of his stomach. Zombie includes a knife and removable shirt to reveal either a partially digested hand and/or woodchuck carcass! 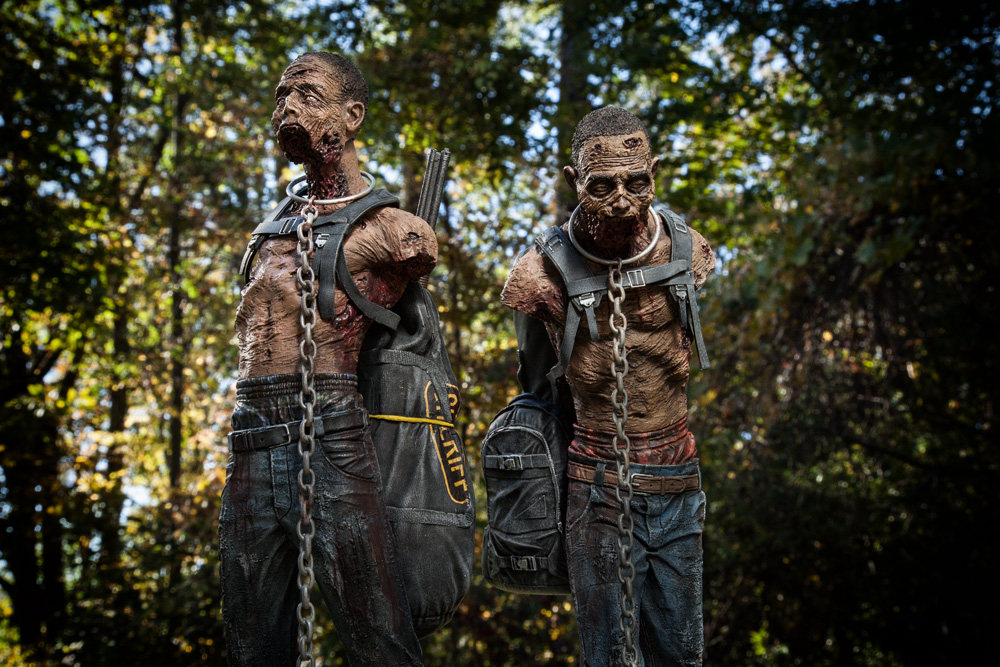 MICHONNE’S ZOMBIE PET 1 -Connected directly to Michonne’s past, she has rendered both these walkers harmless by removing their bottom jaw and arms. Now that both Pets are somewhat subdued, she puts them to good use as pack mules and zombie repellant. Both Pets come with removable backpacks, neck chain leash, arms and bottom jaw. As an added bonus, Pet 1’s backpack comes with a removable shotgun.

MICHONNE’S ZOMBIE PET 2 - Connected directly to Michonne’s past, she has rendered both these walkers harmless by removing their bottom jaw and arms. Now that both Pets are somewhat subdued, she puts them to good use as pack mules and zombie repellant. Both Pets come with removable backpacks, neck chain leash, arms and bottom jaw. Each Pet sold separately.

All figures are sold separately and all of the humans include multiple interchangeable accessories and several points of articulation for limitless possibility and customization. Each zombie figure includes gory play action to truly highlight their gruesome features. MRSP is $14.99 and the figures are available at Amazon.com, Barnes & Noble, CLARKtoys.com, FYE, GameStop, Hastings Entertainment, Toys 'R' Us, Toys 'R' Us Canada, and comic book stores nationwide.

Stay tuned to www.mcfarlane.com for the most current news and information about this series and other upcoming releases from McFarlane Toys.

About “The Walking Dead”

AMC's "The Walking Dead," the number one drama series in basic cable history for Adults 18-49 and Adults 25-54, returns for the second half of its third season on Sunday, February 10 at 9pm ET/PT. Based on the comic book series written by Robert Kirkman, “The Walking Dead” tells the story of the months and years that follow after a zombie apocalypse. It follows a group of survivors, led by police officer Rick Grimes, who travel in search of a safe and secure home. The series, which garnered a 2010 Golden Globe® nomination for Best Television Series – Drama and won the 2011 and 2012 Emmy® Award for Outstanding Prosthetic Make-Up, stars Andrew Lincoln, Laurie Holden, Norman Reedus, Steven Yeun, Chandler Riggs, Scott Wilson, Lauren Cohan, Danai Gurira and David Morrissey.

Robert Kirkman's success and passionate advocacy for creator-owned comics led him to become the first person invited to become a partner at Image Comics since the company's inception twenty years ago. Kirkman is the creator/writer of the Eisner Award-winning The Walking Dead, long-running Invincible, all-ages Super Dinosaur, The Astounding Wolf-Man and Thief of Thieves. In 2010, Kirkman formed his own Image imprint, Skybound, which publishes his own work and Witch Doctor, Guarding the Globe and Clone. Kirkman has earned the respect of the comic, writing and television communities and topped the New York Times bestseller list for graphic novels in 2011 and 2012. In April 2012, he took the top five spots on both the hardcover and paperback lists. He's the creator/executive producer and writer of the hit Emmy®-winning television show, AMC's The Walking Dead, the highest-rated basic cable drama of all time in the U.S, also an international success in 122 countries and 37 languages. AMC is developing Thief of Thieves as a potential series with Kirkman serving as creator/executive producer and writer. Your destination for all news and merchandise from Robert Kirkman, The Walking Dead and all Skybound titles is www.Skybound.com

AMC reigns as the only cable network in history to ever win the Emmy® Award for Outstanding Drama Series four years in a row. Whether commemorating favorite films from every genre and decade or creating acclaimed original programming, the AMC experience is an uncompromising celebration of great stories. AMC's original stories include “Mad Men,” “Breaking Bad,” “The Walking Dead” and “Hell on Wheels.” AMC further demonstrates its commitment to the art of storytelling with its slate of unscripted original series, as well as curated movie franchises like AMC’s Can’t Get Enough and AMC’s Crazy About. AMC is owned and operated by AMC Networks Inc. and its sister networks include IFC, Sundance Channel and WE tv. AMC is available across all platforms, including on-air, online, on demand and mobile. AMC: Story Matters HereSM.

ABOUT MCFARLANE TOYS: Grammy-and Emmy-winning producer/director Todd McFarlane creator of Spawn, is the force behind McFarlane Toys, one of America’s top action figure manufacturers. McFarlane Toys has become a leader and redefined the standards within the action figure industry. For complete information on this pop-culture powerhouse, visit www.McFarlane.com; https://www.facebook.com/liketoddmcfarlane; http://twitter.com/Todd_McFarlane (Todd_McFarlane) and http://www.youtube.com/McFarlaneCompanies