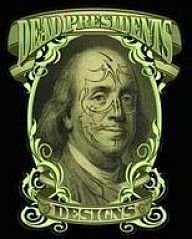 What is Monster Kolor? A high quality custom paint for all of your vinyl , tin , pvc , die cast, & resin painting needs. It comes packaged ready to spray through an airbrush. Along with the launch of the paint there is also an online interactive community to get all of your tech support questions answered & general talk by people who actually use the products every day!

Now, if that wasn't enough, open for business simultaneously is a subsidiary of Dead Presidents Designs called "Presidential Coatings". This is a place for toy manufacturers and makers to get there toy products painted in a production setting still yielding the "Dead Presidents Look" that has become very eye catching in the custom toy world. Check out the video below! Your are all encouraged to come check out all of the latest developments at Dead Presidents Designs.com as well as the Monster Kolor community at Monster Kolor.ning, and of course, the webstore!

4 comments posted
Has anyone here worked with

Has anyone here worked with these? Are they better than testor's?

I cannot answer your question. Perhaps this gentleman can?
Also Matt Doughty seems to like it

Man, those pics are from ages ago, huh?

Well, here's my plug for Monster Kolor copied (and slightly edited) from TBDX:

"This is pretty cool news...

The site is kinda geared towards vinyl customizers, but he wants it to be strictly open to absolutely anyone who's interested in painting toys of all kinds, modifying toys and showing folks how they did it, resin-casting, scratch-building...basically being creative in ANY way with *any* sort of toys!

It's a Ning site, so folks get their own "social networking" style homepage where they can post pics and videos, but I think the bread-n-butter will be it's forum.

Matt tells me that he doesn't want the site to have ONE DAMN bit of toy snobbery in the slightest. If people want to modify ANY toy they want, by all means, bring it. That means dumb urban vinyls (hey, HE may be unbiased...I'M not!), action figures, Japanese vinyls, Transformers...probably even vintage stuff (eep). At the same time, though, he wants the discussions to be robust and critical...no lame one- or two-word (or all-smiley) posts. He wants it to be a legit place for artists to hang out, learn how to use tools they may not have used before, show their stuff off, get useful feedback...all that...REGARDLESS of what your "canvas" is.

Oh, one other important thing: he does NOT want any sort of marketplace. Many of us have seen the crap-show that erupts around TEH MARKET and "custom" toys. The last thing Matt wants is for the Jin Saotome’s out there to use his site to advertise their $8 toys they’re trying to sell for $800. No posting things for sale--in fact, he prefers people NOT just post final pics of stuff they've done. It's more useful for others to see in-progress pics so ideas can be exchanged. Anyway, if someone wants to PM someone else to commission a custom toy privately, that's fine...just keep that stuff off the board.

Again, it's going to be pretty kaiju-centric for a while. He selling his own Monstor Kolor paints through the site, which are obviously aimed at the airbrush guys out there...but like I said, he wants anyone doing *anything* creative with toys to join up and hang out.

He's not trying to have his site compete with anyone else's (here, skullbrain, wherever)...he's just trying to make a special spot for creativity to complement the sites that are out there now. There's already mad heads from skullbrain over there, along with plenty of guys from OctoberToys (the Matt Doughty/Onell Design/Glyos forums).

Matt asked me to spread the word, so that's what I'm doing. Hell, even if you're just a *fan* of custom toys or are just interested in seeing what such folks are doing, join up and hang out. Collecting buzz is at an all-time high these days with highly-publicized liquidation auctions, grails being found, etc...but there's also a critical mass that seems to be gathering around people who want to push the hobby past consumption and into something more productive.

It'll be interesting to see what Monster Kolor blossoms into...and it'll be cool for us mainly-robot-heads to influence that direction..."