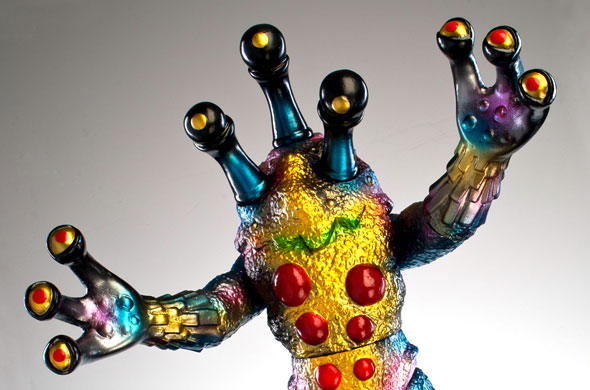 Toy Art Gallery is proud to present the first U.S. release of Alien Argus!  Alien Argus was designed by Mark Nagata and sculpted by Masami Yamada (of Toygraph), stands 10” tall (“Standard” size),  and is ready to invade your toy shelf with 10 points of articulation and two sets of interchangeable eye-stalks!

This is the first U.S. release of the Alien Argus. He’s made in Japan and features a black vinyl base with over 8 separate metallic sprays and multiple paint masks.

Alien Argus will be available at 11am PST on Wednesday, February 2nd 2011, right HERE!

The battle rages on in city after city, as Alien Xam and his hordes make an all out assault against Team Maxx and our hero, Captain Maxx. Its in a rare quite moment that one Team Maxx patrol member by the name of Mark finds himself able to finally put his ray gun rifle down and enjoy dinner and video games. While playing the game Mark notices an odd ripple in his video screen as a man passes by. Looking up Mark sees this mysterious person duck into a nearby alley. Always on the look out for Kaiju and Aliens, this Team Maxx member decides to forgo the rest of his food and follow this person. Ray gun rifle at the ready, Mark turns the corner to find the man discarding his over coat and hat,  to reveal his true form underneath it .. that of Alien Argus!

Suddenly Argus turns and vaults towards Team Maxx member Mark. In one swift move, Mark  quickly brings up and aims the ray gun rifle towards Argus. The blast just misses one of his three eye stalks ! Realizing he needs back up, Mark calls in for more members of Team Maxx. Argus bounds into the busy street, and starts to shoot random citizens from his fingers his melting beams. Within minutes the rest of the Team Maxx members arrive with enough fire power to put down this pesky alien. Just as they ready to fire , Argus begins to grow bigger before their eyes.  Alien Argus now stands as tall as the buildings and begins his destruction once again! Team Maxx knows it can not defeat Alien Argus in his new form. Using a special device they send a signal out to Captain Maxx to come to their rescue once again. Will Captain Maxx make it in time?!