The next Super Sentai is Pirate themed: 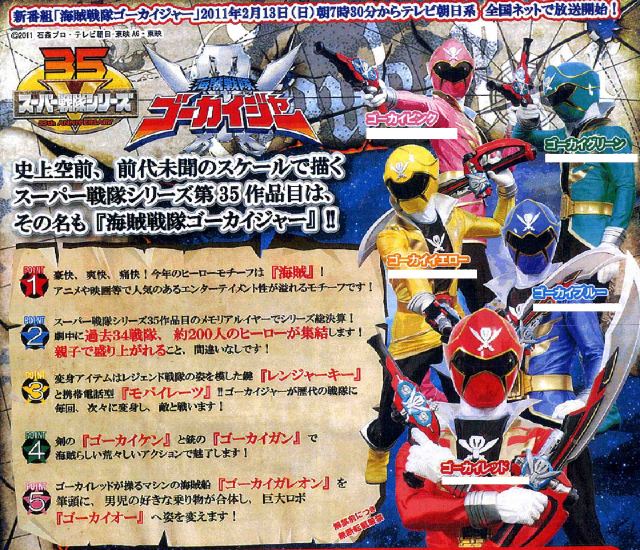 LOL! That's so stupid it went back around to being cool.

Wow, I'm totally digging those suits, and their scabbards aren't too bad either! The pistols worry me a little, though that may just be me because I'm not big on pirates to begin with. (Pirates of the Caribbean: The Ride may be very fun, but none of the movies did it for me...)

And I totally agree, Josh- bring on the transforming pirate ship! For it's gimmick, it will shoot out miniature animal projectiles that transform into their robos! j/k (That would be awesome, wouldn't it, if they actually did that...?)

Apparently the main robot for the series is made from a Pirate Ship that holds the auxiliary robots for the line, Noah's Ark-style.

Between this and Kamen Rider Skull (with a Tophat no less!) I think I'm actually going to be loving both of these series. Enough of the never ending gaudy animals robots, lets see some badass guady pirate ship robots!

This is great news!

Umm... unless I'm much mistaken, we're getting animal-vehicle hybrids again this year. At least, that's the rumor I've heard.

The name of the main 1st mecha is called the GoukaiOh, which transforms from the GoukaiGalleon. The swords and pistols are called GoukaiKen and GoukaiGun, respectively. As for their main gimmick, they can transform into any Sentai hero over the past 35 years using a little statuette that contains said Sentai hero's power... y'know, like Decade did with his cards.

No offense intended, EVA, just wanted to get that out of my system.

The main robot is the pirateship yes. But the rumor is also that it's based on a whale and Noah's Ark as well and will house the auxiliary robots inside, which are also presumably animal/vehicle hybrids.

The big Collars remind me of Go Ranger! I like the classy look of their big overcoat tunics and their skull pistols!

so the new mecha will not combine well that sad :(

Nooooo, you are mistaken- there WILL BE a combining gimmick... with past mecha! Look at Josh's comment below this thread!

Pictures are right around the corner; I'm so excited!

Blunderbusses? I can dig it.

Flintlock Pistols actually. Blunderbusses are what the pilgrims used.

You know, I was wondering about that when I was doing my Crossbone Gundam review, and I was told it was a Blunderbuss.Thanks for clarifying that for me.

I'm pretty big on Pirates, so I hope they make sure that the rangers will have a few bottle's o' good ol' rum aboard their ship, yarharhar... That, and I hope they have some nice pirate-accents....

Okay, all objectivity on my part has just officially been crushed- I'm getting EXCITED!!!

I hope you don't mind, secretcode, but I activated the links in your post so that people won't have to copy/paste; one of the advantages of being on staff. ;)
Thank you for the posting your finds! We'll probably get the full-=page scans very soon if BBTS already has them. (I was wondering how someone- in that link Josh gave us- could describe them in detail if pictures hadn't been released...)

Ohh. My. [Bleep]ing. God. Now THAT is the old Super Sentai robos I know and love! It's like they waited five years to fatten us up with crap just so they could spring all this awesome sauce all of a sudden. GoukaiOh looks a little block-former-ish, but I think that may pan out for the better.

No problem EVA. I figured someone would do that.

And yeah. I completely agree with this upcoming line. This just looks amazing. I love the little touches too, like the "Treasure CHest" styling on the lower legs and such.

GaoGoukaiOh is a centaur in one mode only, but honestly? I love the homage to something most people just forgot about/tried to forget.

Also, the person who leaked these before got the same product scans that most businesses get to order their stock beforehand. It's how most Kamen Rider belts and the Riders themselves get leaked.

I was totally excited for this, until I saw the pics. Pretty hideously ugly, which is kind of a surprise considering how solid shinkenger was. Hopefully the boat will be cool?

Clearly the transformations won't be too complex- mostly stuff sliding and folding around the outside of hollow 'boxes', but we haven't seen that much before, most notably in the GrandLiner from "GoGo-V". However, I think the external details will make up for it.
Certainly for me, integrating past mecha is an amazing idea that I had never considered before. (I just wish MagiDragon was colored more like, well, MagiDragon; or rather that they had used MagiPhoenix which was the first red mecha in "MagiRanger".) It's a far cry better than the actual ranger(s) transforming into a weapon, which was absolutely ridiculous when they did that in "Kamen Rider Decade".
What worries me most right now is how that chest panel gets dealt with when a Super Sentai mecha gets shoved in the torso- from these pictures it looks like it just sticks out forward awkwardly. Maybe it turns into some kind of forward groin armor...?

The series' uniting gimmick also sounds interesting- past rangers (or avatars of said rangers) change into treasure chest keys that [may] have a unique set of sounds depending on which toy they are put into. It's not quite trading cards, but it's pretty close!
I'm totally digging the Goukai Gun and GoukaiKen though.

The red GoukaiGalleon is the only boat I see so far, but the way its mainsail folds up to become GoukaiOh's chest armor is pretty spaz-tacular.

tell me what u think
Its like same as the main mecha in shinkenger and Goliner to bad it only forms the arms and legs :( still dekareds car is awsome when combined hehe I still dont get in the picture why theres a turning switch in the back... hm...

The turning switch in the back activates the opening door gimmick.

i can't wait for this