Ruthless and terrifying, the military forces of the Galactic Empire are the means by which Emperor Palpatine enforces and maintains his rule of terror throughout the galaxy. In the waning days of the Old Republic, the ability of the Jedi Knights to maintain peace and order among its citizens was put to the test in the face of the droid armies of the Separatist Movement. Under the direction of Supreme Chancellor Palpatine, a Grand Army of the Republic was created to counter the increasing Separatist threat. Fueled by the onset of the Clone Wars, the resulting military buildup provided Palpatine with a standing army of over a million clone units that were completely loyal and unquestioning in their obedience. Revealing himself to be a Sith Lord, Palpatine used his army to wipe out the Jedi Knights and cement his position as the tyrannical leader of the newly formed Galactic Empire. 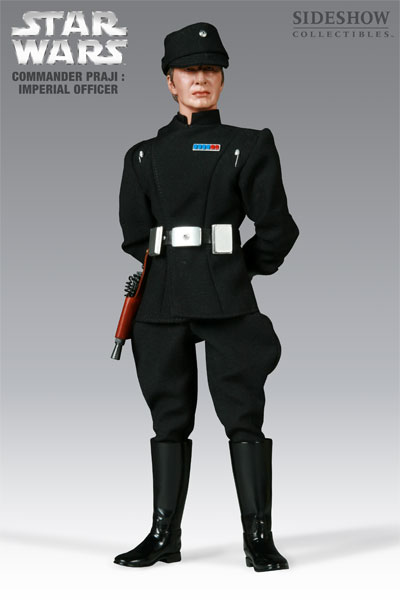 No longer comprised exclusively of clones, the Imperial Military now adds to its massive numbers through forced enlistment and volunteer recruitment through the Imperial Academy. Whether the vast ground forces of the Imperial Army garrisons or the skilled pilots of the Imperial Navy, the soldiers of the Empire are the most highly trained and well-equipped fighting force in the galaxy. Fiercely devoted to the will of Emperor Palpatine, they have earned their reputation as merciless and unflinching troops and commanders who carry out their orders with grim efficiency or face the ultimate consequence.

Although Commander Nahdonnis Praji ruled his Imperial subordinates with a staunch and heavy fist, he always remained calm and level headed. His demeanor impressed his superiors and kept his command in line. While Praji's rule was followed, he himself was less effective in carrying out his orders.

Directed by Lord Vader to personally oversee the mission to retrieve the stolen plans for the Death Star, Praji instead delegated the task to Captain Kosh. But C-3P0 and R2-D2 escaped with the plans on Tatooine, and the integral mission failed. Commander Praji was not defeated by the unsuccessful mission, however. He stood dignified before his superiors and delivered the news of his failure to Darth Vader. This businesslike professionalism appealed to Darth Vader and saved Praji from the most severe of punishments.