Words cannot express how excited I am that this is here. It looks so much better than I could have imagined.

The CollectionDX Nor'easter Vegetius has taken a while to get off the ground, but it is finally here.

This thing is limited to only 50 peices, and they won't last long. Head on over to the CDX Shop and grab one before they are gone! 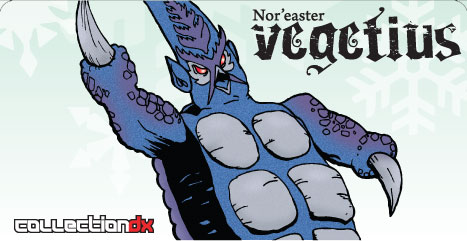 Read the full press release below:

Vegetius stands 12 inches tall and is made out of translucent blue glitter soft vinyl. Made in Japan by the master craftsmen at Marmit, Vegetius has 5 points of articulation and is limited to 50 pieces.

Vegetius is one of the many giant monsters that take part in the Boston-based  Kaiju Big Battel, a series of live action-monster wrestling events. He is the most beast-like creature of the Battel and no man or monster can control him around food.

This color scheme is meant to evoke the harsh, cold winter of the New England region, home to both CollectionDX and Kaiju Big Battel. The blue vinyl is translucent with metallic flakes; a color mixed exclusively for CollectionDX. This color has never been done by Marmit before.

Nor'easter ver. Vegetius is available NOW in the CollectionDX shop for $65

The figure comes bagged with a header card featuring art by CollectionDX’s own JoshB.

Located in Northern Massachusetts, CollectionDX LLC (CollectionDX) is one of the most popular sources of information about Japanese Robots, Monsters, Space toys and other otaku fixations on the web. In addition to the highly trafficked web site, CollectionDX also produces audio and video, exclusive toys, apparel and babies. Lots and lots of babies. CollectionDX founder Joshua Bernard co-authored the 2007 book Tokyo Underground: Toy and Design Culture in Tokyo, which is pretty hard to come across these days. Visit CollectionDX at http://www.collectiondx.com

Congratulations! It looks awesome against that black backdrop and the close-up shot seals the deal for me. Can't wait to get it!

I agree with Dave. The blue figure on that pitch black background looks awesome!

Mine came in today. Just in time, as the temperatures are dropping low this week here in the deep South. The forecasters must have seen him coming!!! hehe

So awesome, I love it! Must snap pics soon!!!

Got it today, and I love it. It is just gorgeous and so fun to handle. Thanks so much. And like REX mentioned, it came with great timing, because it's supposed to start snowing around here very soon.

I have a minuscule vinyl collection, only two pieces and two on the way...but it's off to an awesome start!