Scooby-Doo had Scrappy. Obi-Wan Kenobi had Jar Jar Binks. So, what would Godzilla have? Why, the Godzilla Godzooky Plush, of course! This cuddly, green lizard spent a lot of time hanging around kids in the late 1970s, and he also had the power to summon the mighty Godzilla. You would think that would make you cool, but we're not sure that it does. Anyway, this is one of very few toys based on the character, giving him a collector's appeal that outweighs the memories of the animated The Godzilla Power Hour's theme song. 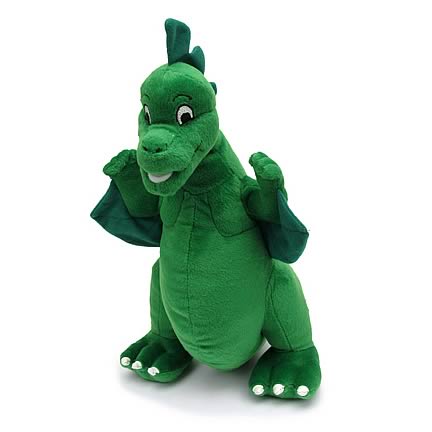 MY MIND!! Wow, Toyvault has some chutzpah! I actually dig their plush Godzilla line, but so far, they've only done genuine kaiju that've appeared in the films. Their Destroyah, for example, is absolutely killer!

But now this!? Ouch! Next, I'll be they'll produce a GINO (Godzilla in Name Only, the American Godzilla)!

Godzilla had sidekick? I never know...

There was a kid-friendly Godzilla cartoon in the 70s that featured this sidekick. He was annoying, but i'd rather that than dumb down godzilla

Well, I've still got my childhood HB Godzilla plush, with the cartoon "Godzilla" logo across his chest!

I'm not, however, at all inclined to pick this up. Both my kids have various Toy Vault Godzilla plushies they sleep with every night, but the Godzooky is unlikely to join them.